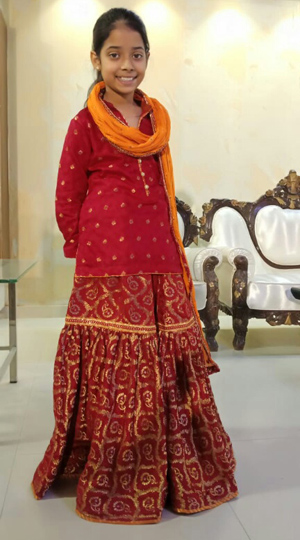 Zara Imran is eight years of age and a student of Generation’s School. She is the daughter of Imran Ghouri and Erum Imran and granddaughter of Engr. Iqbal Ahmed Khan, Vice President of Saudi Aramco Ex-Employees Association (SAEEA).

On May 25, 2018 Zara kept her first fast and had her Ameen (Khatum-Ul-Quran) - a family celebration upon completion of the child's recitation of the Holy Quran - a really great festival of her life. She was very excited but a little nervous because she is a foodaholic and is hungry all the time.

She had Sehri (eaten in the early morning as there will be no breakfast during the fast) from all the baskets she received as gifts from her Nani, Choti Nani, Aqla Nani, and Guriya Nani (grandmother), Khala Amma (aunt). She also got a gift from her Nana (grandfather).

Well, Zara’s command was, “No one will cook nor watch food recipe videos in front of me.” She spent her whole day in the air-conditioned room so she didn’t feel much of the fast and the day was pretty relaxing.

Around 6:15 pm we reached Darbar Banquet B where the event had to take place. The chillers in the banquet weren’t working very well but Zara was fine with it as her excitement was exploding and she was as happy as she could ever be! Her dress was in contrast as the Gararah - a wide trouser - was in red, the shirt was in red and the scarf was in orange. Alhum’dhullillah all the guests had arrived before Iftar time. Zara had her Khatam-e-Quran dua; she recited after Hafiz Muhammad Akram, her Quran Tutor. Everyone then made Dua for her future to be bright. After the Dua, everyone congratulated Zara and praised her.

Zara was now very thirsty and her mouth was watering just looking at the delicious fruit salads and different types of juices but her strong belief in Allah (S.W.A.T.) made her control herself.

After the Azaan (Call for Maghrib prayers), she opened her fast by eating a cream-filled date and reciting the Dua, she thanked Allah (S.W.A.T) for the patience He had given her. The dinner was a three-course meal which included Biryani, a traditional rice meal; Karhai, gravy with chicken; and Rabri Kheer, a sweet dish. The dinner was delicious. Later it was time for the guests to leave; they thanked us for inviting them. It was a spectacular day for Zara.

According to Zara, “Patience is bitter but its fruit is sweet” - and that’s true.

In the end, I would say that completing the Quran isn’t easy - it has 114 Suras (chapters) so it takes a lot of patience and time to complete. In Islam, we start our fast early in the morning and end at dawn. For those 17 hours, we don’t eat anything so we are controlling our hunger and thirst. Patience and self-control play a big part.

“Self-control is the quality that distinguishes the fittest to survive.”