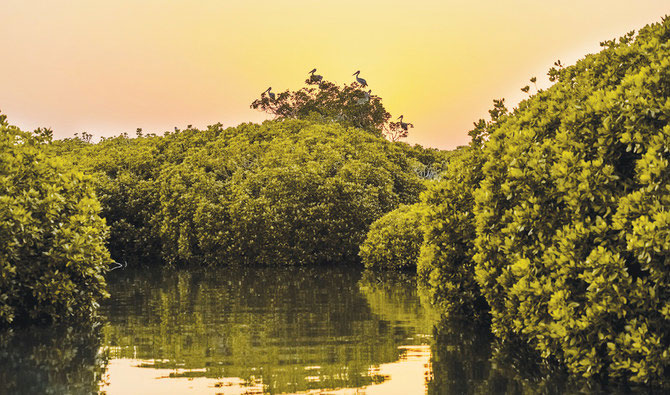 Courtesy of The Arab News via Saudi Tourism

The Farasan Islands, lying 30 miles off the coast of the Red Sea near the city of Jizan, have been called “the Crown Jewels of Saudi Arabia’s travel treasures,” and with good reason. Their unique natural habitat, which includes mangroves, pristine beaches, coral reefs, rich and varied marine life, and much more is truly a wonder to behold. We have selected these pristine jewels as the fifth member of our Seven Natural Wonders of Arabia. We are not alone in our admiration of this magical place. In January 2019 the Farasan Islands Protected Area was formally nominated for recognition as a UNESCO World Heritage Site. As of this writing, a final decision on their permanent status as a WHS has not been made. For the moment, they remain on the currently active WHS Tentative List. It’s fully expected that soon they will join five currently-recognized WHS sites in the Kingdom that were previously featured in the AXP series, The Seven Wonders of Arabia: Madâin Sâlih; At-Turaif District in ad-Dir’iyah; Historic Jeddah; Rock Art in the Ha’il Region; and Al-Ahsa Oasis.

Like so many other astonishing aspects of this land known as the Arabian Peninsula, the Farasan Islands owe much of their unique character to the confluence of the same mighty forces that helped form such notable geological features in the region as the Red Sea, the Dammam Dome, the Al Harrah volcanic complex, and the Great Rift Valley, to name but a few. Adding to the complexity of the islands’ story, their natural history is closely intertwined with the history of the outward spread of human populations from their point of origin in East Africa.

Recent research has established that, beginning roughly 60,000 years ago, the Arabian Peninsula served as a critical path for that outward migration ages before the heyday of the spice and incense routes for which Arabia is far more noted. Remnants of the key geological connection that made that exodus possible are to be found in abundance on the surface of, and in the waters surrounding, the Farasan Islands. Scholars maintain that it was across these same waters—what we know today as the Bab-al-Mandab Straits—from the Horn of Africa to the Arabian Peninsula north of present-day Yemen, with the geological predecessors to the Farasan Islands serving as stepping stones, that the first great wave of our species emigrated from Africa tens of thousands of years ago and began populating the rest of the globe. Researchers point to substantial evidence indicating that lower sea levels and resultant greater exposed landmasses in the Straits posed easily-surmountable obstacles to mass migration in the Pleistocene Age compared to conditions obtaining there today.

There are even indications that, during something called “the Last Glacial Maximum” an estimated 18,000 years ago, the Red Sea for a brief time may have been cut off from the Indian Ocean entirely by a land bridge spanning the present site of the Farasan Islands. If that is true, no vessels of any kind would have been needed for our forebears to transition from one side to the other. Heated debate surrounds this scenario with passionate defenders on both sides of the issue. 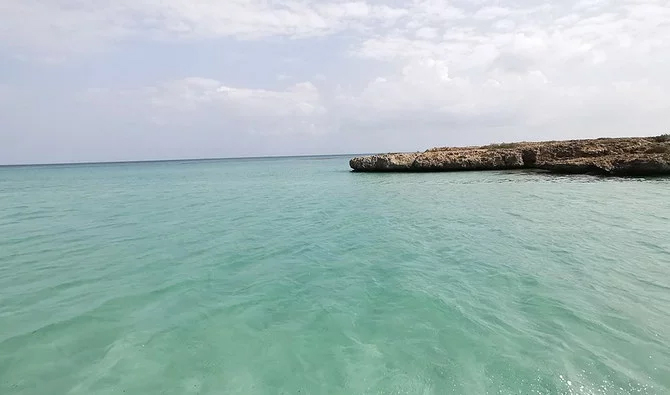 Exactly how humans managed to cross what stretches of water they did face—however reduced in scale they might have been—is unknown, and likely will forever remain the subject of unverifiable speculation, mysteries lost in the mists of prehistory. Did they use log rafts? Perhaps. Primitive boats? Maybe. Inflated animal skins (a.k.a. kelleks)? An intriguing possibility. Nobody really knows. What we do know for certain, however, is, they somehow managed to make it across, and in large numbers.

In documentation published in association with its 2019 Tentative List, UNESCO begins its report on the Farasan Islands with a precise description of their location:

“The Farasan Islands are a large archipelago of over 170 islands and islets of uplifted coral reef lying 40-90 km offshore from the city of Jazan on the south-eastern coast of the Kingdom of Saudi Arabia. The protected area covers 5,408 sq. km, the majority of which is state-owned with recognized municipal lands and private ownerships allocated within the boundaries of organized municipal area in and around the town of Farasan.

“The protected area is fully within the Farasan District which lies within the Imarah (region) of Jazan some 1,100 km to the south of the capital Riyadh.

“The Farasan archipelago is formed from uplifted fossil coral reef. The islands lie on the Arabian continental shelf, which off Jazan is less than 200 m deep and about 120 km wide. The climate is arid and sub-tropical, characterized by high mean annual temperatures and low annual rainfall. …

…There are 23 smaller islands within the protected area, and more than a hundred islets smaller than 0.2 sq. km. The altitude on the islands varies between 0 and around 70m above sea level.”

[All UNESCO-related materials cited in this article were taken from whc.UNESCO.org]

As part of the WHS evaluation process, UNESCO evaluates a nominee site’s qualifications according to an established set of criteria they refer to as “Justification of Outstanding Universal Value.” In the case of the Farasan Islands, they cite Criterion (x), which reads:

“Criterion (x): Contains the most important and significant natural habitats for in-situ conservation of the biological diversity of the Red Sea region as a global hotspot and a conservation priority, including threatened species of outstanding universal value from the point of view of science or conservation.” 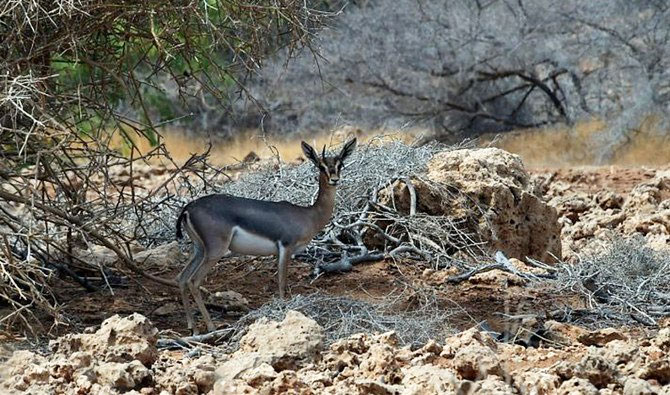 Citing the distinctive flora and fauna found across the Farasan Archipelago, they elaborate on this point:

“The islands support the largest population of idmi gazelle in Saudi Arabia, and high concentrations of greater flamingo, pink-backed pelican, Eurasian spoonbill, and osprey, and the snake Sarso island racer Coluber insulanus, which is endemic to the islands.

“They are the only places in Saudi Arabia in which the plants Nothosaerva brachiata, Commiphora erythraea, Euphorbia sp. aff. fractiflexa, and Ficus populifolia are recorded.

Turning to the land itself, they write:

“The landscape of the islands is one of low brown platforms in the sea, rising to low inland cliffs. This desert bareness against the brilliant blue-greens of the water, under immense skies, give it a sense of remoteness. The long white beaches, low undercut cliffs and rocks of fossilized coral become notable visual features.

Another key consideration in the WHS evaluation process is the “authenticity and/or integrity” of the candidate site. In the case of the Farasans, they have this to say:

“The islands are of sufficient size to contain the whole of the population of idmi gazelle endemic to the islands and Saudi Arabia, high concentrations of nesting pink-backed pelican, osprey, sooty falcon, crab-plover, white-eyed gull, lesser crested tern, white-cheeked tern, and Red Sea (brown) noddy, and other seabirds, as well as charismatic species such as dolphins, whales, dugong, green turtle, hawksbill turtle, and manta ray. Further, they contain coral reefs of high quality and a range of valuable and well-protected coastal wetlands such as red and black mangroves, seagrass beds, saltmarshes, and macroalgal reefs of high conservation importance. The islands are also surrounded by seas rich in a wide diversity of reef fishes and marine invertebrates such as corals, mollusks, and crustaceans.” 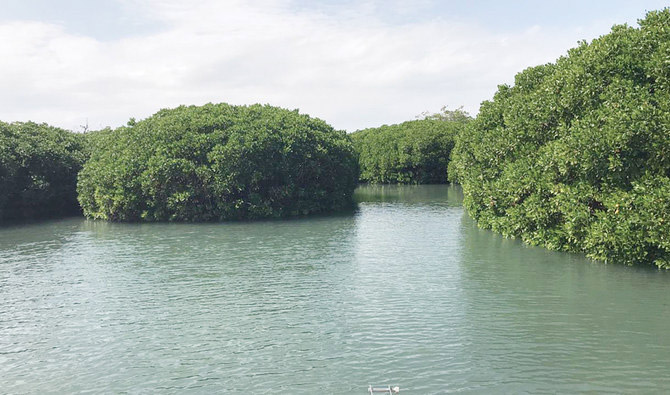 Comparing the Farasans with other similar properties, UNESCO has this to say:

“In terms of terrestrial diversity, the protected area standouts very clearly when compared to other archipelagos and islands in the red sea including the archelogy of Dahlak in Eretria, Gharghada in Egypt and the island of Mukkawar associated with the Sudanese World Heritage Site of Sanganeb, Dungonab and Mukkawar Island. This includes the endemic species of the idmi gazelle Gazella gazella farasani, and the snake Sarso island racer Coluber insulanus.

“As for the marine biodiversity, the Farasan Islands ranks high in terms sea forms diversity, number species from various taxa, number of species of conservation significance, as well as their protection status and management effectiveness. This includes more than 230 fish species, 50 species of coral, and a significant number of species form other taxa including sea birds and sea mammals.

“In addition to the above, the Farasan Islands are listed as an Important Bird Area with a significant number of a globally threatened species: white-eyed gull Larus leucophthalmus; regularly holds 1% or more of a species’ biogeographical or flyway or Middle Eastern population: brown booby Sula leucogaster, goliath heron Ardea goliath, Eurasian spoonbill Platalea leucorodia, sooty gull Larus hemprichii, white-cheeked tern Sterna repressa, bridled tern S. (Onychoprion) anaethetus, Saunders’s tern S. saundersi, and Red Sea noddy Anous stolidus plumbeigularis (this subspecies is endemic to the Red Sea, Gulf of Aden and Western Indian Ocean.); holds a significant number of a species that is threatened or declining in the Middle East: goliath heron Ardea goliath, Egyptian vulture Neophron percnopterus (one of the highest concentrations in Arabia), and sooty falcon Falco concolor; and is a representative example of a habitat associated with a characteristic assemblage of bird species; and a site important for bird conservation through education, research, and tourism.”

The islands make a worthy addition to any annuitant’s bucket list. Whether you’re a fan of exotic wildlife, or stunning natural beauty, or diving, or connections with the long-ago origins of human migration, or are simply addicted to wanderlust like this writer, you owe it to yourself to at least consider a visit to the Farasan Islands Protected Area.

For more information on the islands, visit Farasan Islands​.