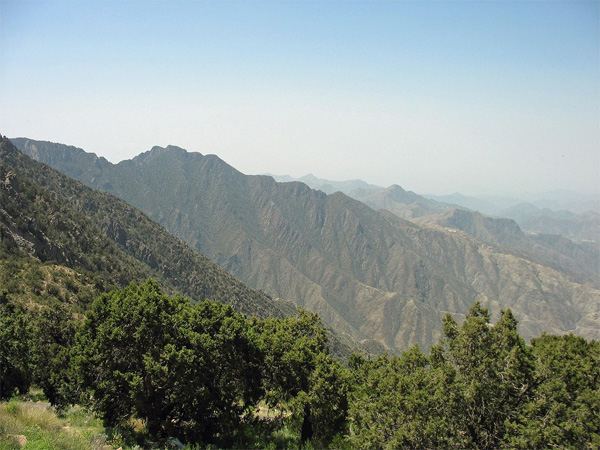 If you’re a fan of geological wonders—as many Aramco annuitants understandably are—a visit to Jabal Sawda will suit your tastes “to a T.” Standing just over (or, depending on whose set of GPS measurements you accept as true, a tad bit shorter than) 10,000 feet, Jabal Sawda in the Asir region of southwestern Saudi Arabia has long been described as the tallest mountain in the Kingdom. Located near the city of Abha, it is part of the inland Sarawat Mountain Range shadowing the Kingdom’s southern Red Sea coast immediately north of Yemen. Cloaked in stands of Juniper trees in their higher reaches, its slopes are home to a wide and colorful array of flora and fauna. For a host of good reasons, geological and otherwise, we hereby name Jabal Sawda the sixth and penultimate member of a most exclusive club, AXP’s Seven Natural Wonders of Arabia.

Like the not-so-distant Farasan Islands Archipelago—the fifth and preceding member named to that exclusive club and easily viewed from its heights on a clear day—the broad mountain known as Jabal Sawda, sitting on the edge of a sweeping escarpment, is a product of the monumental tectonic forces that originally shaped the Arabian Shield eons ago when the vast crucible created by mighty collisions between a slowly-shifting continental microplate and its neighboring continental plate generated a succession of emergent events marked by massive arcs of magmatism. Today, the wild array of complex minerals resulting from those monumental forces is the subject of extensive scientific research. But you needn’t be a credentialed geologist or volcanologist to enjoy a visit to Jabal Sawda. The mountain and surrounding area are replete with an ample offering of wondrous attractions anyone with a touch of wanderlust in them can appreciate.

Visitors from elsewhere in the Kingdom, and from surrounding countries in the region, looking for a change of pace from the summertime heat of the Peninsula’s deserts hasten to the resorts of Sawda for respite. There they can enjoy refreshing weather at the height of the Arabian summer as occasional monsoons sweeping in off the Indian Ocean bring moist winds and cooler weather to the region. Visitors from other lands may wish to follow their example.

For determined outdoor enthusiasts, Jabal Sawda sports a centuries-old rocky, twisting, switch-back trail on its western side that winds its way along the escarpment from the valley floor below to the very top of the summit. Imagine while you’re hiking there, traders from long ago lugging precious cargoes of spices and incense along this same path. As you follow in their footsteps, don’t be surprised if you’re passed by nimble-footed locals on their way to and from work. In this way, the ancient rhythms of life on Jabal Sawda continue to this day.

As your hike progresses, you’ll notice the landscape and flora changing with the elevation: the higher you climb, the greener and more lush your surroundings become; the lower you go, the browner and drier and more desert-like they turn. By the time you reach the top, you’ll feel like you’re in a different world which, in fact, you are. Along your route up and down the mountain, you’ll come upon numerous outlooks offering stunning vistas on the surrounding land. And it’s likely members of the local wildlife brigades, including lots of baboons, will make an appearance, checking you out. The steep slopes of Jabal Sawda are a natural home for them.

Whether you start at the bottom and finish at the top or vice versa, you’ll progress between a progression of strikingly contrasting climates, at very the bottom, one dry and arid, marked by a mostly-barren desert landscape sprinkled with cacti; midway, a second, hot and humid and sub-tropical, marked by jungle-like vegetation; at the top, a third, noticeably cooler (though still humid) thanks to the elevation and often-present cloud cover.

Such are the vagaries of the weather on the mountain, snowfalls in the Asir region are not unheard of—in one noteworthy instance as recently as April 2018. Depending on what time of year you decide to visit Jabal Sawda, you might choose to pack for possible unexpected events such as snow. Prepare to “layer up” and you won’t regret having the proper gear and clothing near at hand, whether you end up using it or not.

Prepare yourself as well for the possibility of views obscured by clouds once you reach the summit. Weather conditions on the heights of the Sarawats can be unpredictable and change in an instant with shifts in wind direction and changes in wind speed, It’s possible that the best views revealed to you as you surmount Jabal Sawda on foot or in a vehicle will happen at lower elevations. Even then, the experience is well worth the trip.

Travel experts generally suggest that the best time to visit Saudi Arabia is during the winter months starting in late October and extending into early March. The recommended window of opportunity for visiting Jabal Sawda and the Asir Mountains, on the other hand, are nearly the reverse! The winter months there are marked by spells of dense fog and yes, even snow. Given those facts, the best time to visit them is before November or after February. If you include Jabal Sawda on your travel itinerary, it can be argued that any time of the year is a good time to visit the Kingdom!

There's a paved road along with a cable car that can take visitors disinclined to travel there on foot to the summit of Jabal Sawda. The trail just described has been assigned a modest degree of difficulty by organizations publishing such ratings, but that doesn’t mean you should throw caution to the wind. Be certain that you’re suitably fit before you attempt such a climb, and be sure to dress accordingly, bring copious amounts of water along to keep you properly hydrated, and pack a modest supply of food such as trail mix to keep you energized.

Away from the peak itself, other interesting destinations abound. Home to more than 300 species of birds, Asir National Park, a protected area surrounding the base of Jabal Sawda, is an ornithologist’s delight.

Sitting at a 7,700-foot elevation and surrounded by terraced farms growing fruits and flowers and vegetables, the nearby city of Abha is divided into four districts. Abha features a contrasting mix of the old and the new in architecture and creature comforts. There will you find a mix of traditional three-story mud houses standing side by side with modern glass-and-metal high-rises. For serious and casual shoppers alike, there are souks specializing in gold, spices, oils and incense, traditional leather goods, and brightly-colored handicrafts in the distinctive traditional Asiri fashion.

Of special note, a visit to Jabal Sawda will take you within easy travel distance of the village of Rijal Alma, less than an hour’s drive away. Rijal Alma is a recognized UNESCO World Heritage Site and one of AXP’s Seven Wonders of Arabia series.