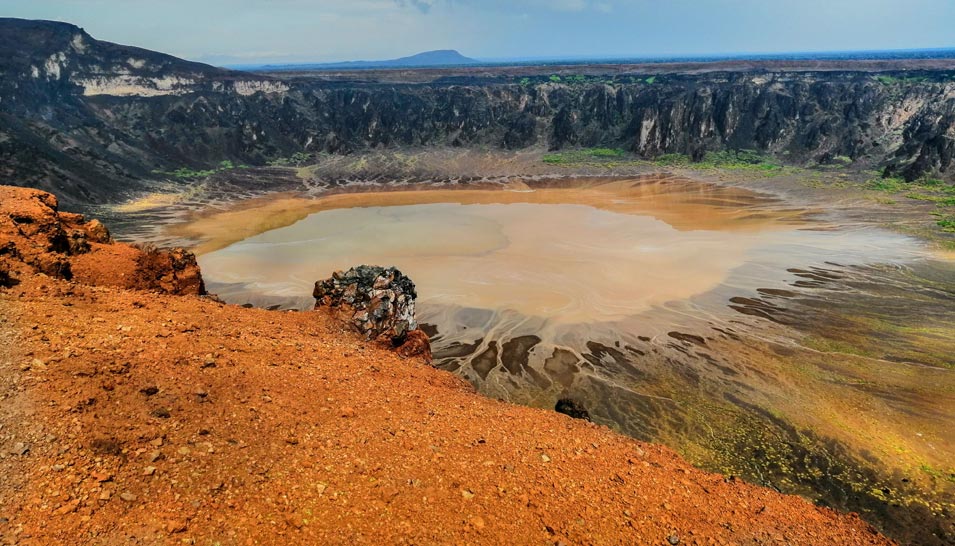 Saudi Arabia has taken dramatic steps in recent years to open its borders to foreign tourists; to restore, maintain, and protect its many important natural and man-made attractions; and to spread the word of these astonishing sites to people around the world. Recognizing the special uniqueness of the Kingdom’s heritage, seeking to highlight a carefully-chosen septet of its many historical attractions, in November 2018 AXP published the first installment of a seven-part series called “The Seven Wonders of Arabia.” The subject of that first article was the Nabataean rock city of Madâin Sâlih. Six more articles followed over the next half-year, taking readers on literary visits to historic Old Jeddah; to the Turaif District in ad-Dir’iyah; to the rock art of the Ha’il Region; to Al-Hasa Oasis; to the “hanging city” of Rijal Alma; and, finally, to ad-Dir’iyah Ar Rajajil, a.k.a. “the Stonehenge of Saudi Arabia.”

Responding to keen interest shown by readers in that initial set of articles, in July 2019, AXP launched a complementary new seven-part series called “The Seven Natural Wonders of Arabia.” That tour began with a visit to Elephant Rock in the Al-’Ula region of northwestern Arabia not far from Madâin Sâlih. Five more stops have followed since then, including visits to Jabal Abyad near Medina; to “the Edge of the World” northwest of Riyadh; to the mountains of al Fayfa; to the Farasan Island Archipelago; and to Jabal Sawda in Asir Province. We conclude our tour of Arabia’s Seven Natural Wonders here with a visit to Al Wahbah Crater on the western edge of the Harrat Kishb basalt plateau, 150 miles north-northeast of Makkah and a four-hour drive east from Jeddah.

With a depth of 800 feet and a diameter of one-and-a-quarter miles, Al Wahbah is the largest of a cluster of distinctive volcanic cones found there. Originally thought to be the result of a large meteor crashing into the earth, scientific sleuthing proved otherwise. One of Al Wahbah’s distinguishing characteristics is that it is in fact what is known as a “maar” crater, having been created by a massive steam explosion resulting from super-heated magma rising from deep within the earth colliding with groundwater. The visible profile of a typical maar crater’s cone is broad and flat, its depth relatively modest, and its cauldron filled with water forming a shallow lake. Thanks to the heat and aridity of the Arabian desert, Al Wahbah Crater is bone dry. In place of a placid lake, one finds instead a thick layer of white sodium phosphate crystals carpeting the crater’s floor—a veritable dry salt lake.

Al Wahbah Crater’s unique characteristics have increasingly drawn the attention of scientists as they attempt to unravel its many mysteries. Gathering that information is of crucial long-term importance. The western reaches of the Arabian Peninsula remain volcanically active, making the question of the date of the next eruption a matter not of “if” but of “when?” On this front, a major international research project known as Volcanic Risk in Saudi Arabia (“VORiSA” for short) is currently underway, assessing the hazards posed by Al Wahbah and its fellow volcanic while mapping out the mechanisms that lead to volcanic eruptions. The concerns being addressed by VORiSA should not be discounted. The most recent volcanic eruption in the area of Al Wahbah is estimated to have taken place 10,000 years ago; the most recent significant volcanic eruption anywhere in the Kingdom took place in 2009. 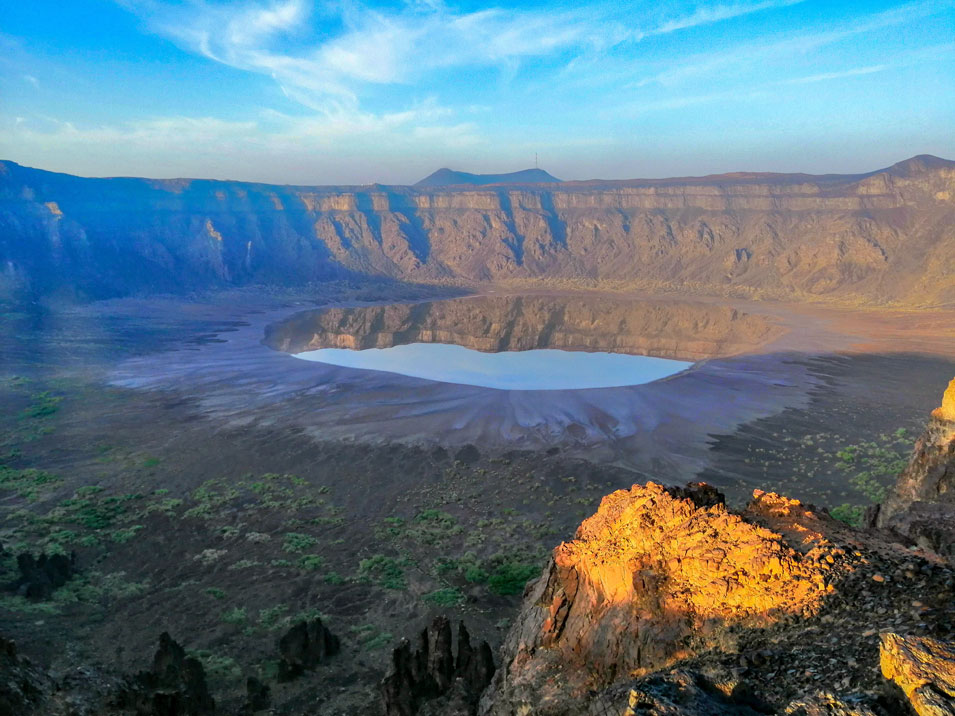 A recent article in the scientific journal Open Geosciences describes in scientific terms the characteristics of Al Wahbah Crater that make it so unique. You needn’t be a volcanologist to appreciate the points being made; casual readers can get the gist of what is being said as well:

“The crater is surrounded by a tephra ring that consists predominantly of base surge deposits accumulated over a pre-maar scoria cone and underlying multiple lava flow units. The tephra ring acted as an obstacle against younger lava flows that were diverted along the margin of the tephra ring creating unique lava flow surface textures that recorded inflation and deflation processes along the margin of the post-maar lava flow. Al Wahbah is a unique geological feature that is not only a dramatic landform but also a site that can promote our understanding of complex phreatomagmatic monogenetic volcanism. The complex geological features perfectly preserved at Al Wahbah makes this site as an excellent geotope and a potential centre of geoeducation programs that could lead to the establishment of a geopark in the broader area at the Kishb Volcanic Field.”

Of note, Al Wahbah Crater and its immediate maar volcanic neighbors in the Harrat Kishb volcanic field were born during the Pleistocene Age an estimated 1.14 million years ago, making them of much more recent vintage than the numerous other volcanoes scattered about the western reaches of the Kingdom formed in the post-Red Sea rift era.

Another remarkable feature of Al Wahbah Crater is the abundance of green vegetation growing on its slopes and around its rim. Here you will find palm trees and shrubs in stark contrast with the barren lands surrounding the crater. Not surprisingly, Saudi tourism is focusing considerable attention on this distinctive natural wonder as part of its overall plan to attract more tourists from abroad to the Kingdom.

Visitors have the option of driving the comfortably paved roads from Jeddah or Taif to the crater themselves or hiring a car and guide at an estimated rate of 200 USD a day. Once at the site, they’ll have the option of driving around the crater’s rim if they traveled there in a 4X4. Otherwise, they’ll have to settle for gazing at the crater from the heights of the rim. Or, if they’re feeling adventurous, they can opt to hike down a zig-zag trail to the crater floor. It’s best to time one’s hike for early in the morning or later in the day, thus avoiding the intense heat of the midday desert sun. Allow an hour or so for the descent and two hours or so for the ascent. And, as with any outdoor excursion in the Kingdom, proper clothing, including sturdy hiking boots (no tennie-runners, please!), are absolute requirements. Most important, packing lots of water helps avoid becoming dehydrated, and having an ample supply of sunscreen on hand provides protection from the sun’s rays.

The closest accommodations for travelers seeking rooms for the night are 60+ miles away in the village of Maradkht. For overnight campers, there are many suitable camping spots ringing the crater. Setting up your tent at one of them will give you the once-in-a-lifetime opportunity to enjoy the breathtaking views from atop the crater of a stunning desert sunset before bedtime and an equally-stunning desert sunrise before breakfast. And don’t forget to stay up later than your normal bedtime on your overnight stay so that you can enjoy the mesmerizing sight of an immeasurable multitude of stars filling the dark Arabian skies at night. With no nearby city lights to diminish the view, and no urban noises to disturb the desert stillness, you’ll be able to take the other-worldly, astonishing, unforgettable astral display in total peace and silence.

With this visit to Al Wahbah Crater we close our series on The Seven Natural Wonders of Arabia. We thank you, dear readers, for accompanying us on our literary journey and urge you to take a physical journey of your own to visit some of these natural wonders. And, while you’re at it, you might want to visit one or more of the Seven Wonders of Arabia featured in a previous travel series.

The Kingdom of Saudi Arabia is truly a wondrous place to visit. AXP has now provided readers with 14 good reasons for returning there if you’re a veteran ExPat or traveling there for the first time if you’re a novice to life on the Peninsula. In either case, we ask the same question: “What are you waiting for?” It’s never been easier to sample the delights of the Kingdom. The Saudi land and people await you. Go for it!