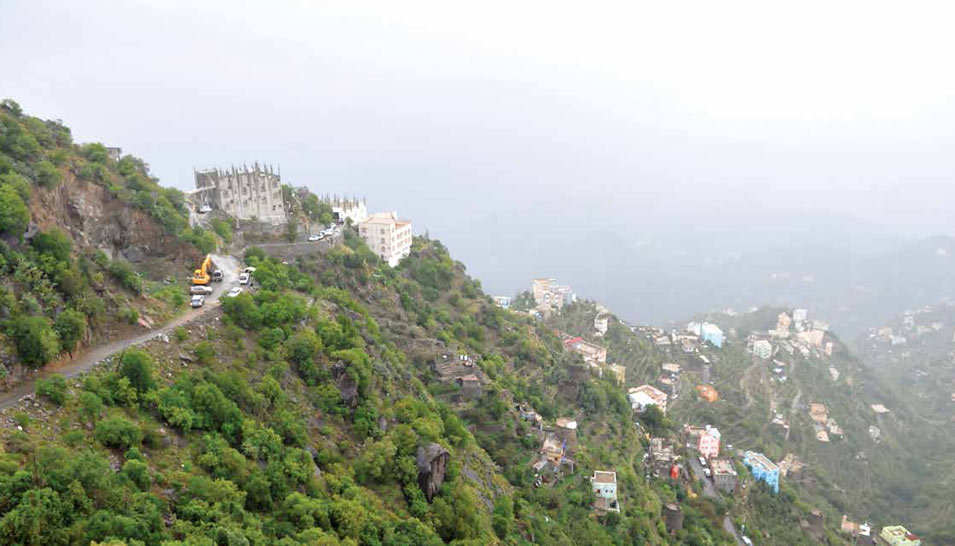 Courtesy of The Arabian Sun by Arshad Nake

Tucked away in the heights of Jizan Province 40 or so miles inland from the Kingdom’s southern Red Sea coast just north of Yemen, the lush mountains of the Fayfa massif add an unexpected new dimension to a traveler’s Saudi experience. For a multitude of reasons, this among them, we have selected al Fayfa—also known as the Fifa or Faifa Mountains—as the fourth member of the awe-inspiring septet of sites we call The Seven Natural Wonders of Arabia.

Readers may recall that in August of last year AXP featured a story called “A Trip to Little Known Paradises of Saudi Arabia” authored by Arshad Nake and originally published by The Arabian Sun.

Extolling al Fayfa as “a little-known paradise of Saudi Arabia,” Nake wrote that “Going places and taking in the sights is a good way to break out of your routine, and Saudi Arabia offers no shortage of sightseeing opportunities. … Al Fayfa offers visitors a unique scenic view, and for those who take on the challenge of hiking up the mountain, a bird’s-eye view of the area.” His story recounts the experiences of a group of Saudi Aramco employees, consisting of a mixture of expatriates and Saudis, that had recently taken a road trip to al Fayfa to explore a land noted for its high peaks, some of them soaring above the clouds as high as 8,500 feet.

Among the many wonders they experienced on their adventure was rain—a rarity nearly anywhere else in the Kingdom but not at al Fayfa. “The group witnessed terraces,” Nake reported, “built on the mountains that had been developed over time to aid agriculture. Many houses have been built on those steep slopes, shrouded among the trees and vegetation. The land itself is fertile and the weather is humid. In today’s modern world, observing people living such a simple lifestyle was very soothing to watch—a far departure from how we know and do things as the people in al Fayfa seemed very relaxed and carefree.”

“Al Fayfa is also home to the largest private museum in the Jazan region,” he continued. “Built inside a castle so to speak, the inventory has stuffed animals, vintage weapons and bandoleers, ropes, carriage bags, tools, fire lanterns, and traditional utility dishes, including some impressive golden teapots. There was even what seemed to be a medieval warrior helmet and chain vest hung on a peg.”

Nake concluded his piece by writing: “Touring these hidden places offers an opportunity for people to revive themselves with ‘escape therapy.’ If a mind and body relaxation index could be measured after such visits, our scores easily would have been sky-high.”

[NOTE: The visit to al Fayfa Nake describes comes with an asterisk attached. Al Fayfa sits close to Saudi’s border with Yemen, and war continues to rage to the south. As a result, access to the area is restricted, save for special circumstances such as the special status enjoyed by employees of Saudi Aramco. As many readers are aware, Aramco operates a major bulk terminal plant in the Port of Jizan, close to the wonders of al Fayfa but close as well to the dangers posed by the conflict in Yemen. This unique situation allows Aramcons carefully monitored access to al Fayfa, but such a privilege may not be available to people outside of the Aramco family. Readers considering a visit to al Fayfa are advised to check well in advance as to whether it is even possible for them to travel to the region.]

For readers not fortunate enough to have accompanied Nake and his friends to al Fayfa, nor to have visited there on separate occasions themselves, we offer here our own account of this magical place, this natural wonder of Arabia.

People sometimes refer to al Fayfa as “the jewel of Jizan Province,” and with good reason. Its soaring peaks and emerald-clad slopes bear stunning witness to the wonders Mother Nature has bestowed upon this unique corner of Arabia. A visit here is full of unsurpassed surprises, inspiring another colorful nickname for the region: “neighbor of the moon.” The moon is noted for its craters; al Fayfa is noted for its narrow, windy roads and the colorful hand-made carriages locals depend on for hauling goods and people up and down its steep contours. Matching the uniqueness of their surrounding environment—and not unlike remote mountain populations the world over—through the ages the score of tribal clans calling al Fayfa home have developed their own distinctive culture and customs.

The mountain village bearing the name al Fayfa lies some 100 miles south of another noted Saudi mountain village—Rijal Alma—featured by AXP in April of this year as part of its previous series on the Seven Wonders of Arabia. It’s fitting that one of Saudi Arabia’s seven man-made wonders is a not-so-distant neighbor to one of its seven natural wonders.

Occasional AXP contributor Brid Beeler’s words describing Rijal Alma could easily be applied to al Fayfa: “Running along the backbone of the Kingdom, the mountainous Asir region rises dramatically between Taif and Najran on the Yemeni border. Throughout the Asir, villages cling precariously to the cliff faces and slumber quietly in hidden ravines. While most visitors to Jebel Soudah go there for its cool mountain air, its verdant forest, naughty baboons and stunning year-round green scenery, only a few choose to take the hair-raising journey down the switchback mountain road that leads to the village of Rijal Alma.”

[The one significant contrast between Beeler’s description of Rijal Alma and the physical particulars of most al Fayfa villages is that the latter typically sit atop a peak and require considerable upward, not downward, climbing, of switchback mountain roads.]

The populations of both locales are known for wearing wreaths of flowers in their hair, colorful bands of cloth around their waists, and silver daggers in their belts. Visitors to either place will not soon forget the people they meet there; even less likely will they forget the stunning natural beauty of the scenery.

The unique climate of this rugged, jagged, mountainous land—cooled and wetted by moist breezes blowing in off the Red Sea—makes the region an ideal home to a variety of exotic animal species, including the critically endangered Arabian leopard (Panthera pardus nimr). That same climate makes possible as well a thriving agricultural lifestyle unlike anything seen anywhere else in the Kingdom, leading to the production of coffee, wheat, alfalfa, barley, senna, and even one of the most famous aromatics of yore—frankincense. The region is also famous for the wild sweet olives growing at the edge of the escarpment in what is known as the juniper zone.

Scattered in an irregular pattern throughout the region are patches of forest tucked within difficult-to-access valleys where exceedingly rare species of flora continue to thrive. Here are found some of the last vestiges of Arabia’s original forest—a rare sight in the best of times, a vanishing sight in ours.

An outstanding natural feature of the area are the Khoubah hot springs, some 45 miles inland from the city of Jizan. With waters rich in natural elements reaching a temperature of 113º F (45º C), the Khoubah hot springs offer sufferers of skin diseases and rheumatism the ultimate naturopathic cure. They match well with the traditional folk medicine practiced in the area using a host of medicinal plants to address a wide range of diseases and illnesses, ranging from rheumatism and asthma to constipation and colds, from urinary infections to skin allergies and more.

Throughout history, the difficult—in places impenetrable—terrain of al Fayfa and ferocity and unyielding pride of the local tribes have shrouded the land in mystery, shielding it from the inquisitive eyes of historians and geologists. Today, the on-going strife in nearby Yemen adds to the region’s reputation as a land apart from the rest of Arabia.

The people, the flora, the fauna, and the landscape of al Fayfa are all unique treasures. Together they surely merit recognition as one of the Seven Natural Wonders of Arabia.

With four stops completed on our voyage to those seven, we look forward to sharing with readers next month the wonders of the fifth stop on our travel itinerary, the Farasan Islands poised 25 miles due west from Jizan off the Kingdom’s southwestern coast in the Red Sea.

Read A Trip to Little Known Paradises of Saudi Arabia by Arshad Nake, The Arabian Sun.