Tales of the Bedouin - Part X: Flashback: My Near-Fatal Flip on Fazran Road

In this installment, Mark Lowey reminisces about his eventful first day at a new jobsite upon his return from his first long vacation. Here he expands on his memory, captured in a series of journal entries that haunt him to this day.

First thing in the morning, I checked in at our admin offices and turned in my passport for safekeeping. The day prior, I had just returned from my first R&R. Now, back at the office, I learned I had a new assignment – the remote Gas Oil Separation Plant (GOSP) at Fazran.

I still felt a bit out of sorts, exhausted from my vacation and from jet lag. In early September, after what seemed an eternity, my leave request had been approved for my first vacation. Rest and Relaxation, better known as R&R. I flew from Dhahran to Bahrain to Bangkok, and for the next 22 days, camera in hand, I had toured the sights of Thailand, Hong Kong, and the Philippines. Arriving back at Dhahran airport on September 29, I had been collected by the company courier and, after an abbreviated “workday” and an early dinner, I had fallen asleep at 4:00 p.m. and slept for 13 ½ hours.

I caught a lift out to the Fazran jobsite, a one-hour, 15-minute drive. I needed to set up my tiny office in a portable trailer shared with the millwrights. Upon arrival, my first task was clear. The corner by the window assigned to me lacked a desk and chair.

Mickey H., the site project manager for our client company, offered to lend me his truck to fetch the office furniture at my old office at a site that was a 45-minute drive away. Mickey’s Chevrolet truck had an 8- cylinder engine, more powerful than the 6-cylinder trucks I was accustomed to driving. As I set off, I leaned on the accelerator pedal and felt the extra power. I didn’t make it very far.

Fazran Road originated as a drilling rig access road made of compacted clay marl, wide enough for two vehicles to pass one another. Recently upgraded for daily vehicular use, a narrow, single lane of asphalt pavement had been laid in the middle, leaving wide shoulders of white, dusty marl on either side.

Because the road rose and fell over the undulating terrain of low sand dunes, it was important to be cautious when approaching the crest of a hill. The road ahead would be blocked from view and oncoming traffic, goats, or camels might be there. Drivers had to move to the right, halfway off the single lane of asphalt and put two tires on the shoulder, which was about two inches lower than the paved surface. It required some skill and practice to keep the car from losing control as the tires dipped and hit the soft shoulder.

Fazran Road was essentially straight, but it had a few minor turns. One such slight bend to the left was just after the crest of a dune several kilometers south of Fazran. I had two wheels on the shoulder as I came over the crest and observed no traffic or obstructions. I turned the steering wheel a little to the left, but I was going too fast. The front right tire on the shoulder lost traction, and the truck began to slide, twisting to the left. I overcompensated to get back on the asphalt. The truck was now oriented too far to the left. Once all four tires hit the pavement the truck shot straight off the road and onto the desert floor. It all happened in the blink of an eye. I had not even applied the brakes.

“Borrowed Mickey’s truck and set off to get my office desk from Ain Dar GOSP-4. Seven clicks south I went over a hill and the road cuts to the left!! Sliding on right shoulder . . . then out of control to the left and off the road into the soft desert sand!”
--Mark Lowey, journal entry, September 30, 1978

The level of the desert sand was about two feet below that of the road. After a bumpy drop onto the sand, I was still traveling at considerable speed diagonally from the road. All I needed to do was continue straight and come to a controlled stop. But I made a novice’s mistake, I tried to correct my direction by turning to the right.

Now the truck was flipping over and over sideways, the seat belt digging into my left shoulder. I had the windows open, and sand was flying all around me. I lost my grip on the steering wheel and cut my right hand on the dashboard. As I tumbled, it was eerily quiet except for a buzzing in my ear – I realized it was the sound of my own voice. I was screaming.

The truck came to rest, finally tipping upright onto four wheels. Its two wheels on the left side were embedded in the sand. I sat there for a moment, stunned, with only a painful hand and a small abrasion from the seat belt. Where I sat, the driver side door frame was intact, plenty of headroom. Then, I looked beside me to my right. The passenger side door and roof had been crushed downward to the level of the windowsill. Luckily, no one had been with me. 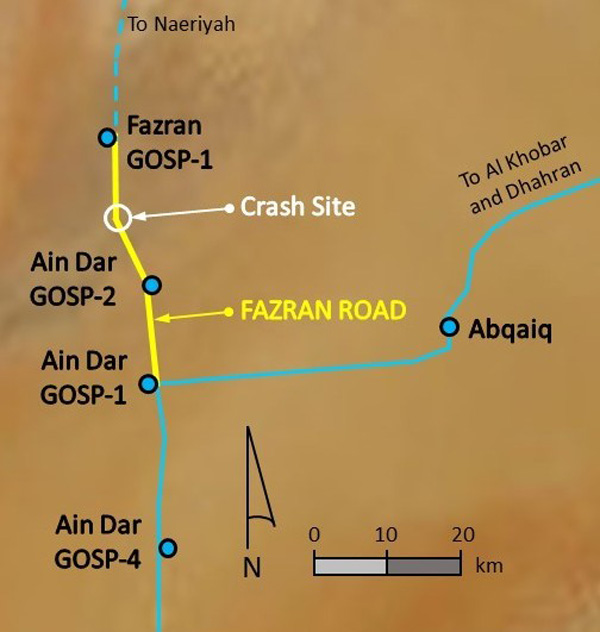 Fazran Road and the crash site. 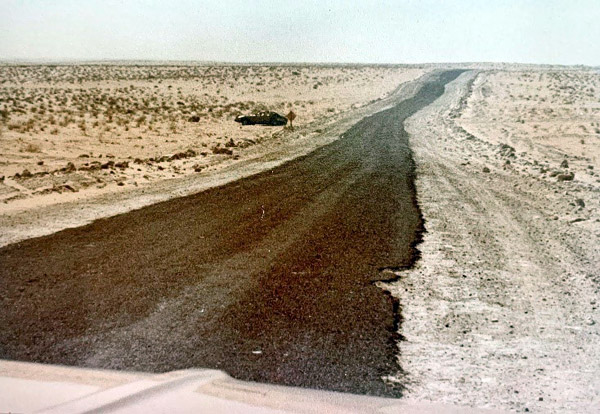 Southbound on Fazran Road – at the “Curve.” (Mickey’s wrecked truck in the distance on the left.) (Photo by Mark Lowey, ©1978) 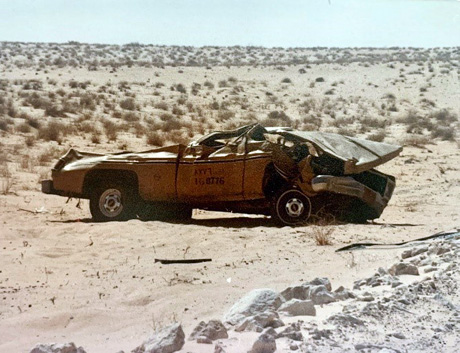 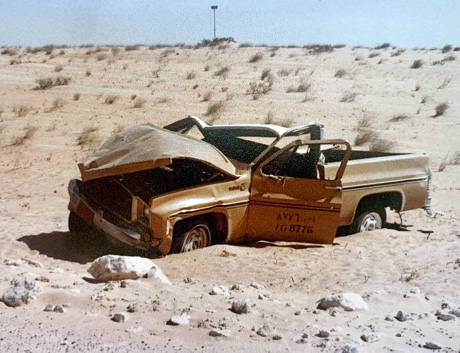 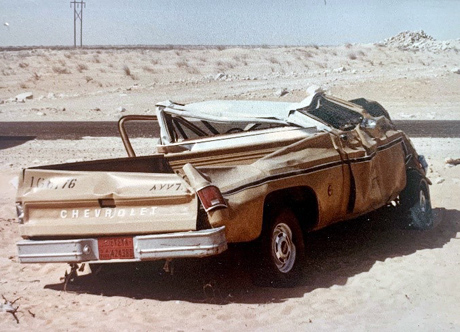 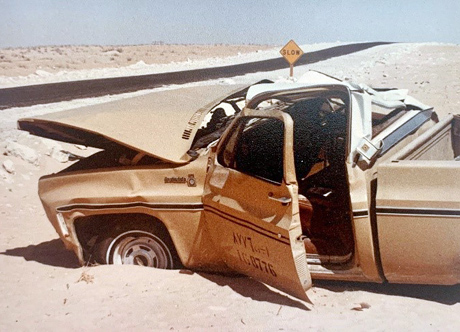 A single “SLOW” warning sign for northbound traffic, only.

Rescue and the Law of the Desert

On foot and covered in sand and dust, I scrambled back to the empty road – there was no one in sight on this desolate stretch of desert. At that point, I was suffering from shock, and I don’t remember anything except getting into a red pickup truck that stopped for me. Three helpful Bedouins dropped me back at Mickey’s office, where he and his colleagues were happy that I was all right. The site nurse treated the cut on my pinky knuckle.

I hid out in my office, picking at my box lunch and leaning back in a chair with my feet on a table. My pants were bloodstained from my hand. There was still work to do that day, the Weekly Construction Schedule. At quitting time, my colleague, Tommy H., and I started for home and paused at the crash site. “God, that truck is f***ing DESTROYED,” I later wrote.

We stopped to examine the damage and collect my belongings that I had left in the truck, but it was a fruitless search. Mickey’s tape deck, the spare tire and jack, and my Ray Ban sunglasses were all gone. Such is the law of the desert, I suppose.

“I am very lucky once again,” was my final journal entry that day.

Sunday, October 1, 1978. Worked the morning at Fazran and got the bus driver to take me to AD-4. But first took photos of yesterday’s wrecked truck – unreal. Transferred papers out of one desk, grabbed it and a chair. Back to Fazran to set up. Hung out in Tommy H.’s office and Dave G. stopped by. Dave said he doesn’t feel bad anymore about his truck accident now that I’ve wrecked one.

Wednesday, October 4. On the way in to work noticed Mickey’s wrecked truck is gone!

Thursday, October 5. On the way to work saw that an Arab rolled his taxi in the desert at that same “death curve.” After work, Mickey gave me a lift back to Abqaiq in his replacement truck. I gave him SR 150 (US $40) for the lost tape deck.

Saturday, October 7. Tommy and I left the site early to go to the home office. We came around the “death curve” and there was another Aramco truck – flipped! - on the other side of the road. Both our jaws dropped as we saw the truck and “Ed” an Englishman standing next to it. Stopped and surveyed the scene – Christ, he is lucky to be alive, too! Ed was a bit dazed. So, he climbed in our truck and we went to the nearest GOSP, Ain Dar-2, to call-in Ed’s accident. The office phones were dead, no power, so we tried in the operator’s control room – no luck. The Saudi operator had me spell out “Power Failure” for him. Then we took Ed home to Aramco camp in Abqaiq. On the way, he explained the rules of cricket and I think I understand. Sounds fun.

Sunday, October 8. On way to work, I took pictures of Ed’s truck – crunch! Noticed there are a few new warning signs up along Fazran Road. 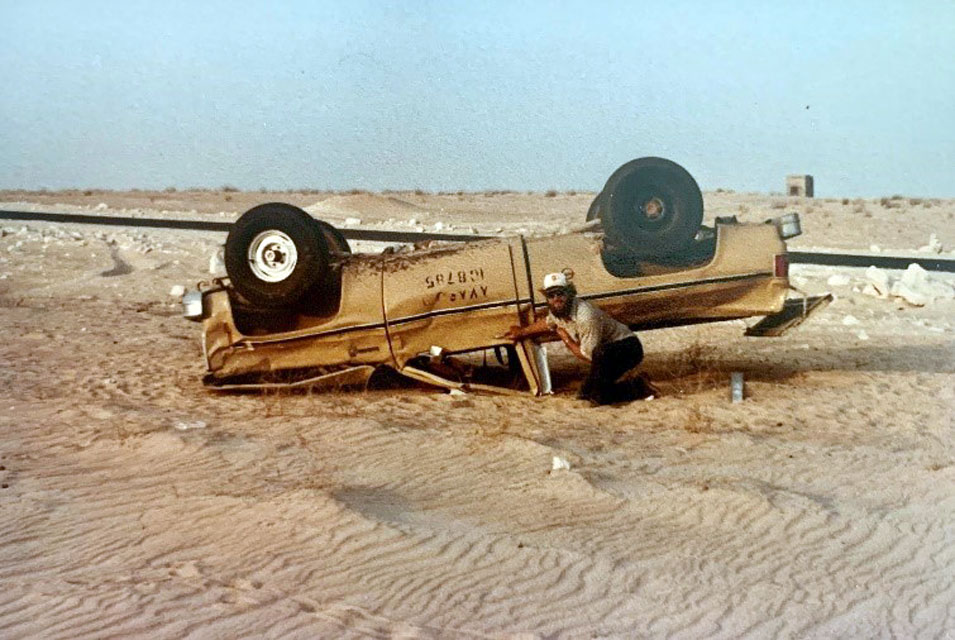 Author’s note: Late in my career, I became a construction safety officer and was involved in several safe-driving initiatives in Saudi Arabia. The messages were always the same: maintain a safe speed, be aware of your surroundings and what’s ahead of you, and always wear your seatbelt. I never forgot that day in 1978 and my brush with fate on the Fazran Road. 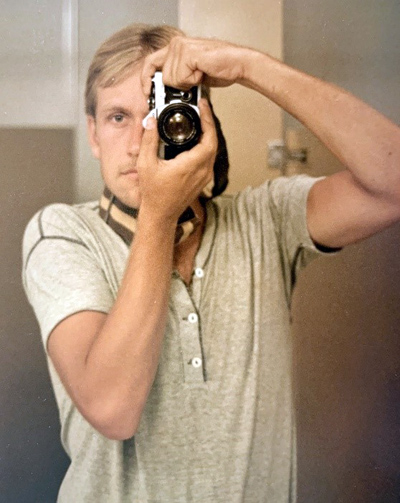