Tales of the Bedouin – Part XI: A Memorable Day Out – The Camel Beauty Pageant

In April 2014, my friend, Suhaim Alsy’ari, invited me to a special event in the desert.

I first met Suhaim in 1978, when he was eight years old and I was 23. At that time, Suhaim and his family lived in a humble Bedouin encampment situated close to the remote Aramco construction site, Fazran GOSP [1], to which I was assigned as a junior engineer. This was my first job after graduating from university in California. 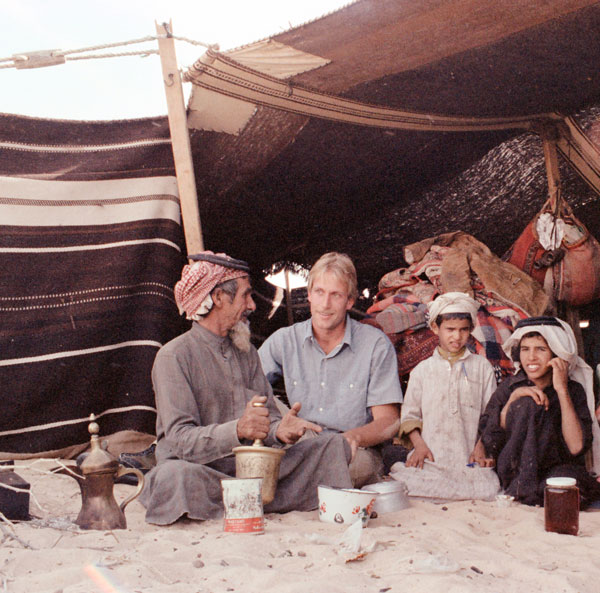 In December 1978, young Suhaim sits beside Mark along with his elder brother, Saleh, and father, Abdulhadi Alsy’ari, in their tent. © Mark Lowey

Thirty-five years later, in 2013, I was back in Abqaiq working for Aramco. In a happy coincidence through a mutual friend, Suhaim and I were reconnected and met again at a family reunion, arranged by Suhaim, in the desert north of Fazran. We became fast friends and he generously invited me to many of his family gatherings. One day Suhaim called my cell phone and invited me to accompany him and his friend, Nasser Al Marri, to a local camel beauty pageant. Would I bring along my wife and, perhaps, another family? “Of course,” was my instant response.

The next Friday, my wife, Ann, and I, along with fellow Aramcons Scott and Tess Tarver, set off from Abqaiq Community and rendezvoused with Suhaim on the side of the road just past the intersection of the Riyadh-Dammam Highway and the Salasil Road. We then followed his Toyota Land Cruiser, heading west on a narrow, two-lane paved road. Soon we arrived at a vast, sandy desert expanse, an area called Jouf Beni Hajjar. The competition was underway. 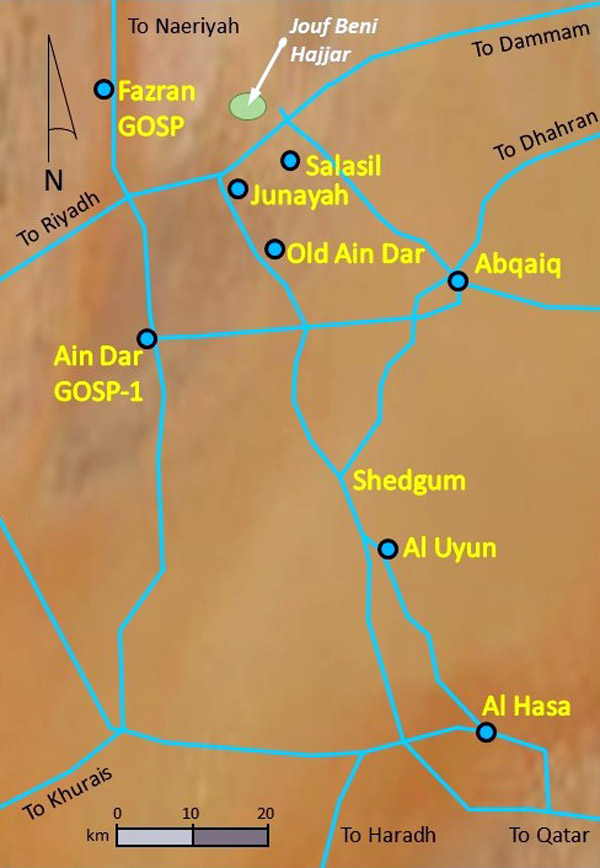 Here and there were clusters of pick-up trucks and SUVs beside several camels. Each group was a different family that had entered the competition. In the distance was the judging arena ringed with low steel barricades. 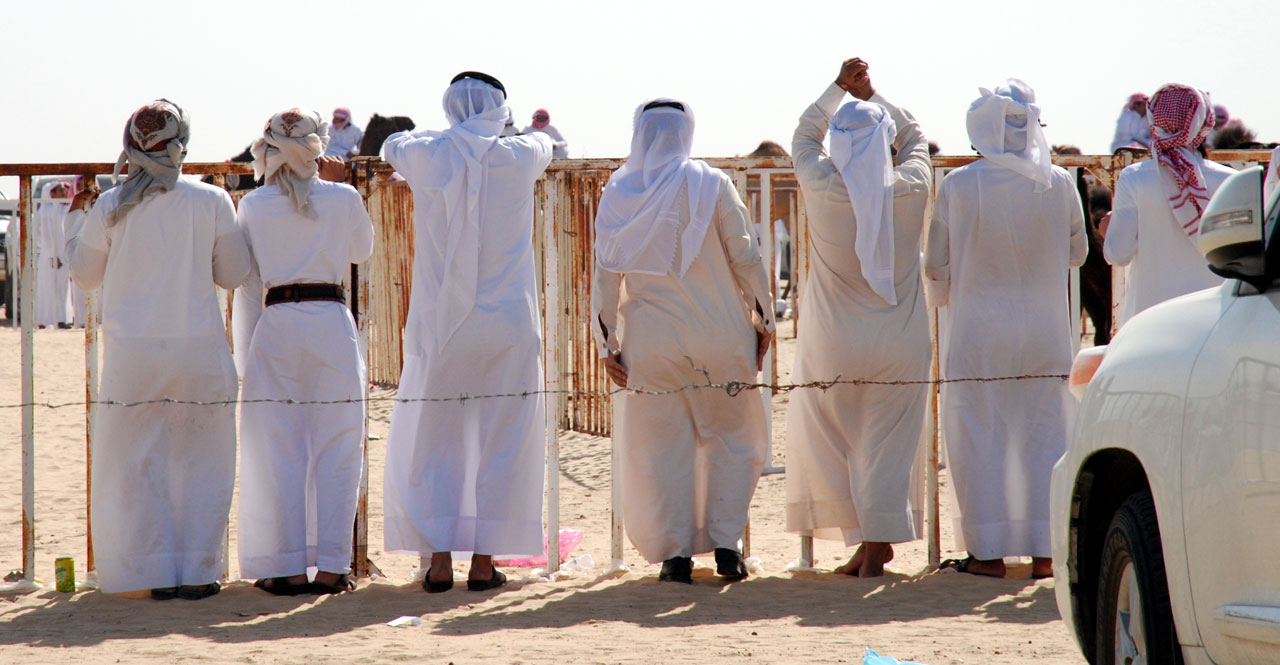 Why A Camel Beauty Contest?

Saudis are intimately connected to their camels. Celebrated as a symbol of the traditional nomadic lifestyle of Bedouin Arabs, camels are beloved in this culture, and camel pageants can be found all around the Kingdom to honor the beauty of these dromedaries, or one-humped camels, and to preserve this heritage.

Interest in camel competitions has grown since the boom of oil production during the 20th century, as camels became associated with status and wealth. In addition to camel races, camel beauty competitions are held to encourage the preservation of the purebreds.

Eye of The Beholder

The beauty of the camel is based on the size of its head, whether its lips cover its teeth, the length of its neck, the roundness of its hump, the size and shape of its eyes, and length of its eyelashes. The nose should be long and droop down, that's more beautiful. The ears should stand back, and the neck should be long. The hump should be high, but slightly to the back.

The camels, females only, are divided into four categories according to breed - the black majaheem, white maghateer, dark brown shi'l and the sufur, which are white-beige with black shoulders. [2]

There is no fixed annual schedule, and smaller competitions are typically held by interested local citizens. The contest at Jouf Beni Hajer was arranged by Hamad Saad Al Hajri, an enthusiastic owner of purebreds. As with any pageant, there were souvenir stands and refreshment kiosks.

These contests are high-spirited social events and an opportunity for business networking. Suhaim told me recently, “Sometimes they organize camel beauty contests for the purpose of selling and buying deals, or to consolidate relations with owners and possibly seek a position with them, especially since camels have become a source of wealth.” He continued, “Some of them hold camel beauty contests for fun and excitement.”

A maghateer mother and her baby. © Mark Lowey 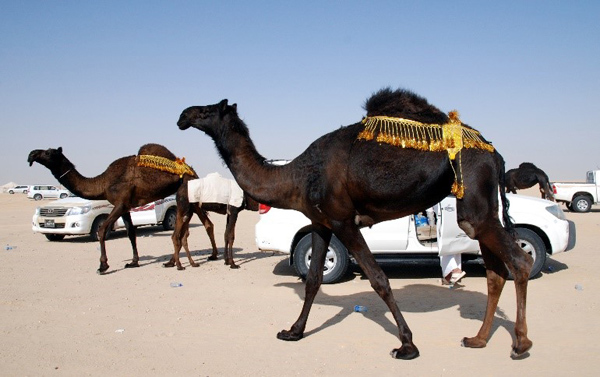 Did We Miss The Crowning Moment?

I think we arrived a little late and the actual judging had already taken place. We looked around, took in the incredible scene, and photographed the contestants, some of whom were being given bottled water. They must have been thirsty.

The Pause that Refreshes

All Saudi gatherings of friends and family are punctuated by tea and coffee breaks. As our pleasant day wore on, it was time for refreshments. Suhaim and his friend, Nasser Al Marri, had brought flasks of hot sweet tea and cardamom coffee. We took a break in the shade of the Land Cruiser. 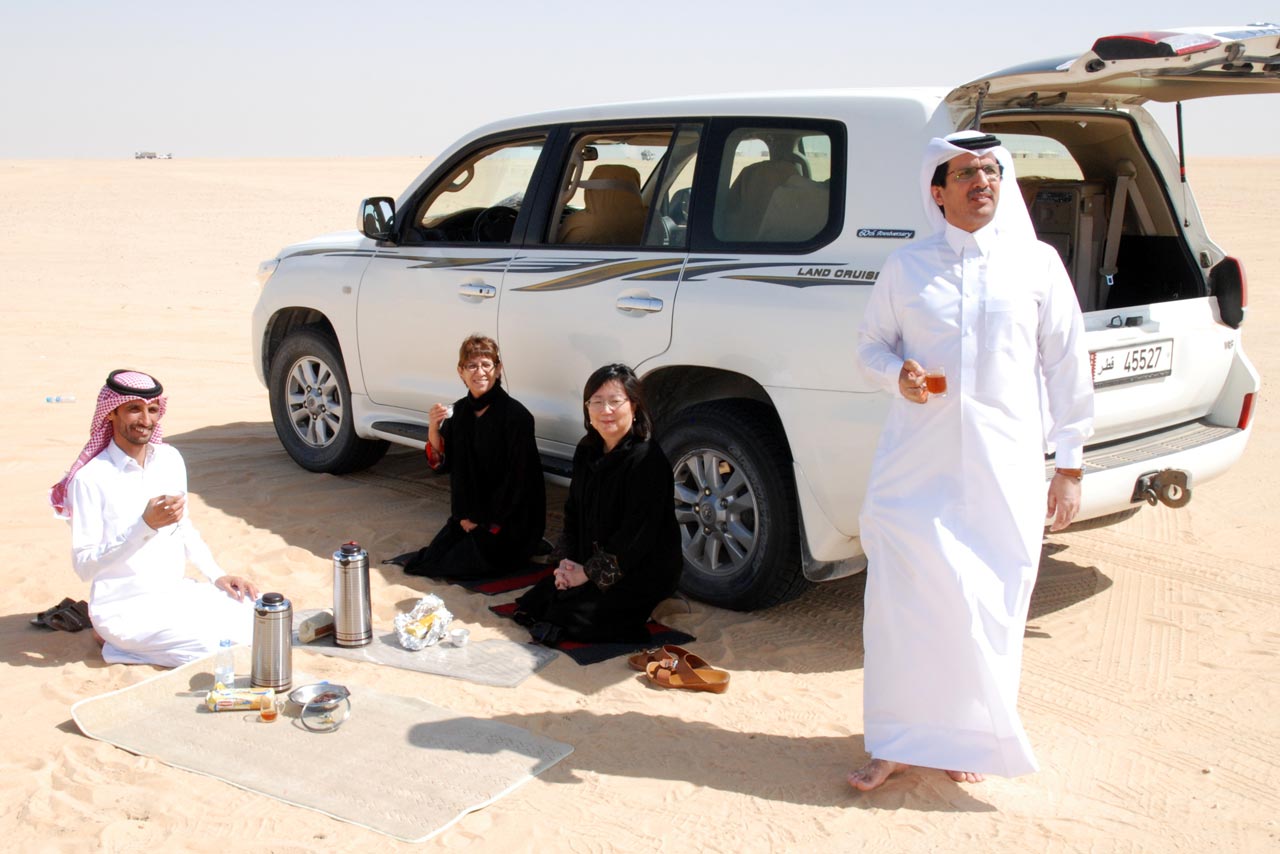 Near the judging arena, we came across a display of camel-related souvenirs for sale. There were decorative weavings and woolen garlands. We purchased ornamental camel sticks. 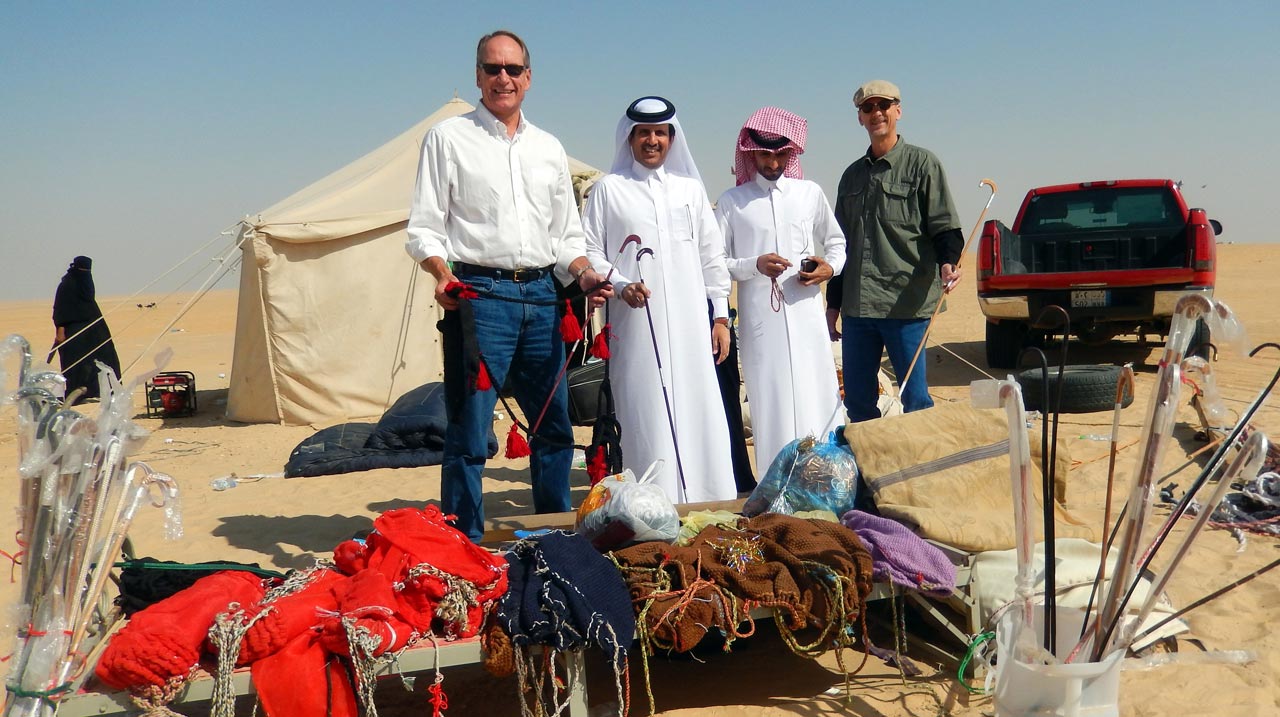 Suddenly we were attracted to the roar of the crowd and the amplified music. The Al Zayed family, part of Beni Hajjar Tribe, had won first prize in the majaheem category. We quickly hopped in the car and drove closer to observe the commotion. Ann and Tess decided to remain in the car.

The Al Zayed clan, surrounded by their friends and family, were celebrating as Saudis do, rhythmically dancing and singing with camel sticks, flags, and swords proudly held high. Upbeat Arabic music blared from loudspeakers mounted atop one of the SUVs. Revelers climbed atop a water tanker truck to salute and wave flags.

Led by Suhaim and Nasser, Scott and I made our way through the crowd and joined in the revelry. We were the only westerners in the crowd and were welcomed with smiles. We had our camel sticks, all the better to participate in the dancing. 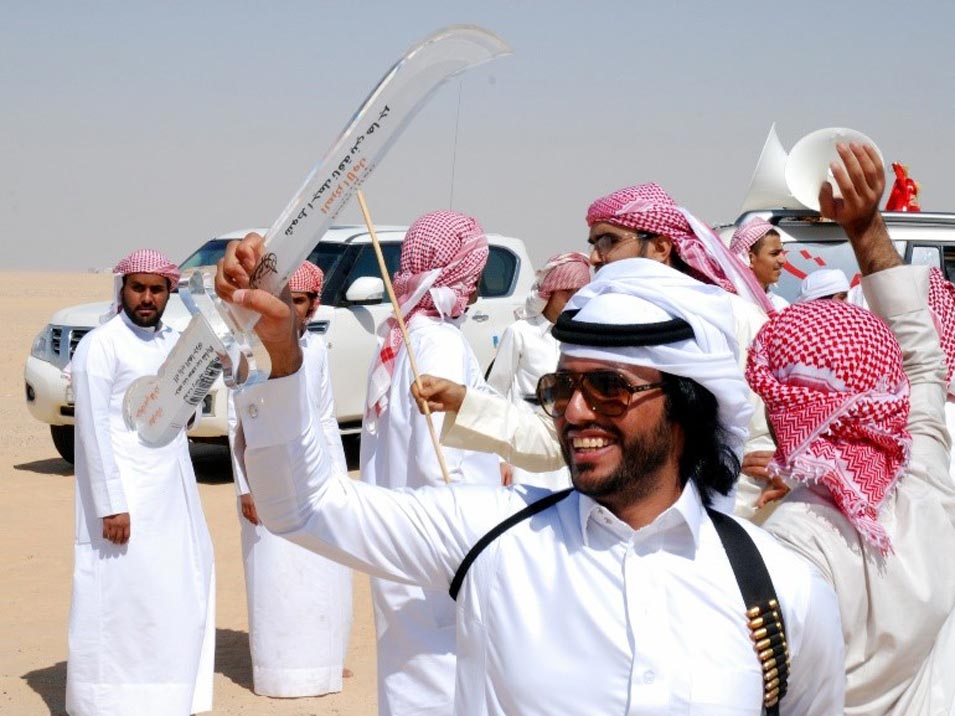 The first-place trophy was a clear resin sword. © Mark Lowey 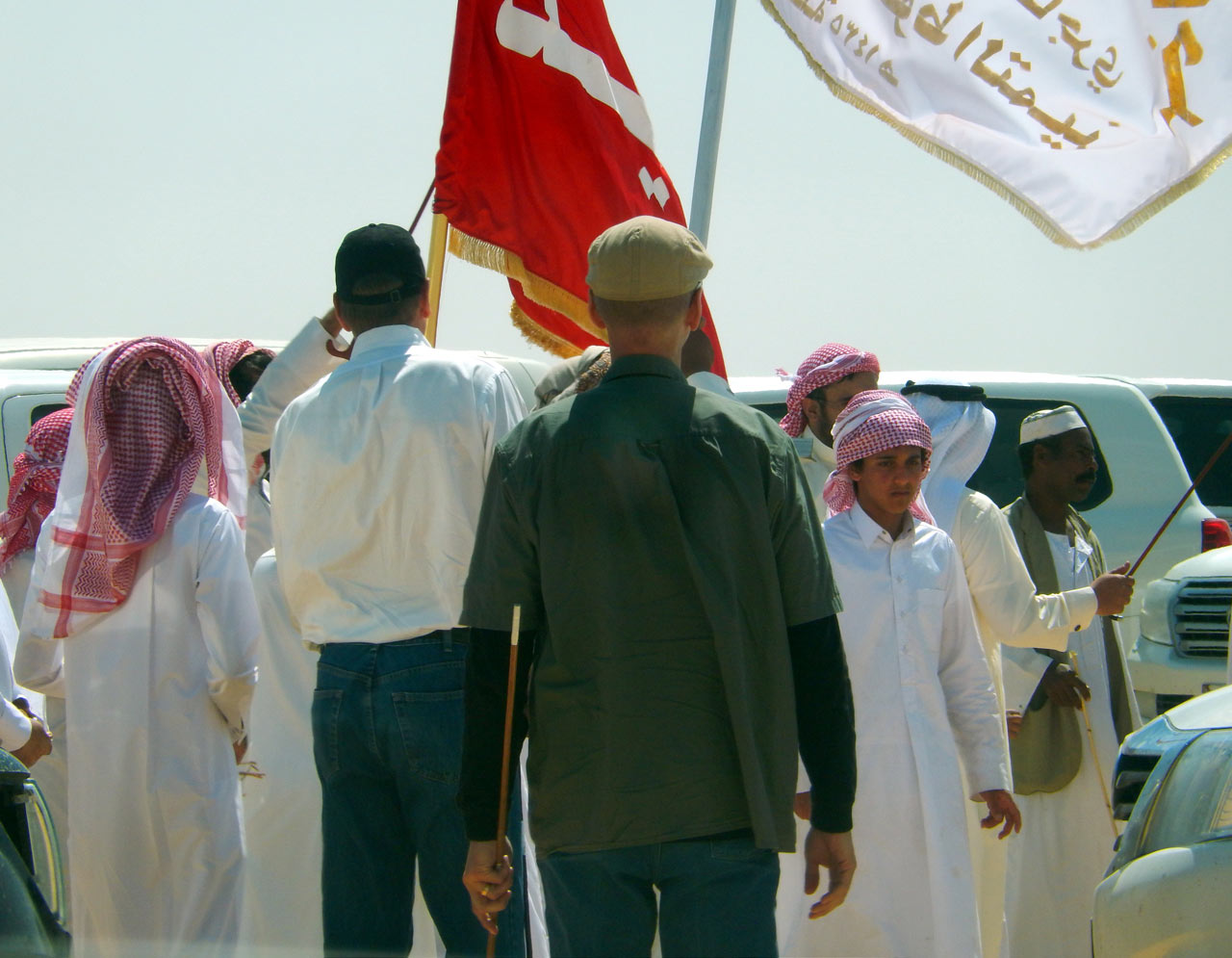 At the appropriate time the dancing stopped, and a slow procession began to move across the expanse towards the venue’s entrance. The magnificent, black majaheem champion camel was surrounded by her prideful owners who walked alongside. Slow-moving trucks and SUVs joined the parade. Well-wishers hung out of open doors and sunroofs. Horns honked. The SUV kept pace and continued blasting music. We drove beside the throng and waved congratulations to the happy victors. 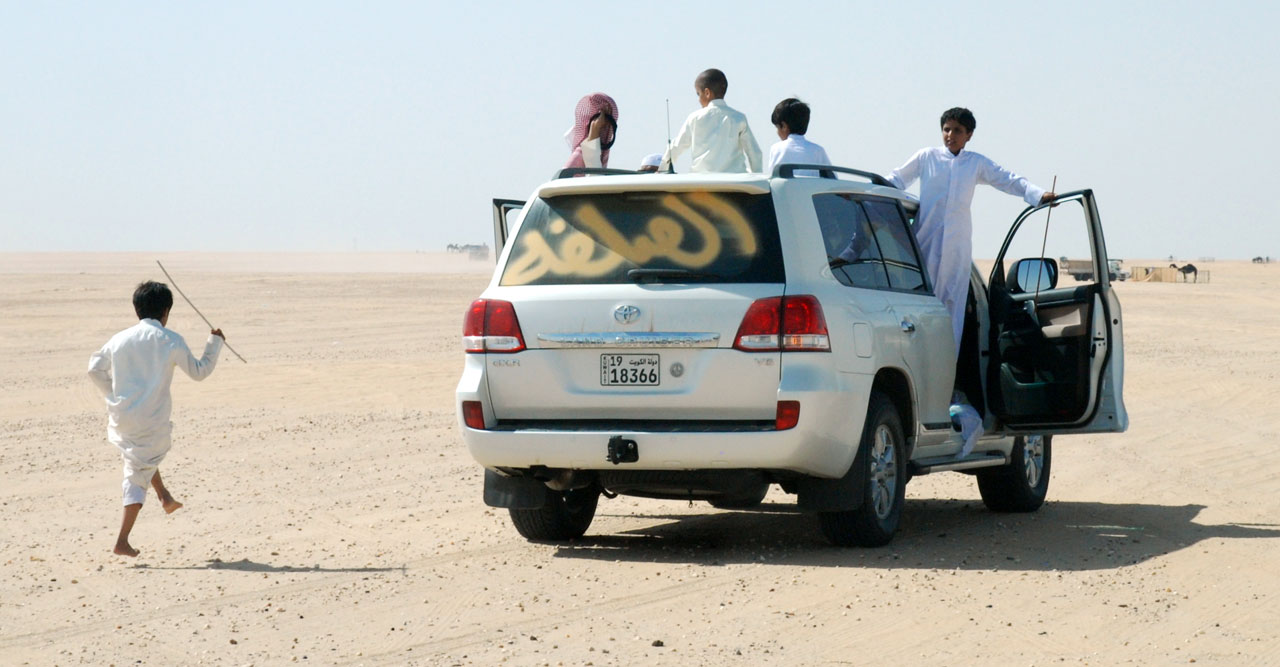 Finally, we thanked and bid farewell to Suhaim and Nasser and returned the way we came. It had been an unforgettable day.

[1] GOSP means Gas Oil Separation Plant. GOSPs are located every ten or fifteen kilometers across the Southern Area Ghawar (Oil Field) in the Eastern Province. The Ghawar stretches from Haradh in the south to Fazran in the north. GOSPs receive the raw crude from nearby oil wells and provide the initial separation of water and gas from the oil prior to shipment to Abqaiq Plants for further processing. Until Aramco’s gas gathering program began in the early 1980s, the natural gas was burnt off, or flared, at each GOSP. 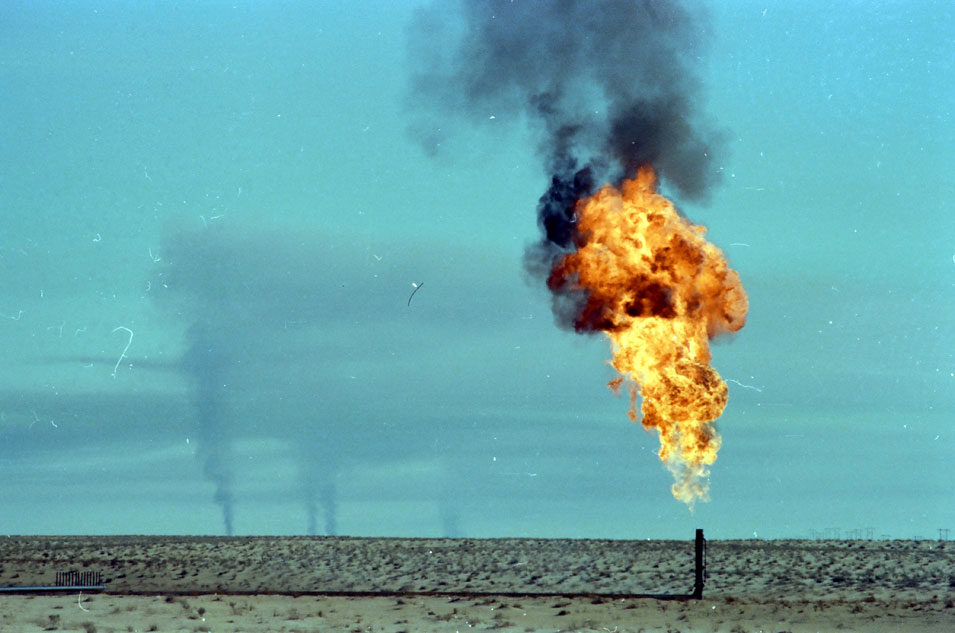 Looking south from the Ain Dar GOSP-1 flare stack in 1978. The flares of the other Ain Dar GOSPs and the Shedgum GOSPs are visible. © Mark Lowey 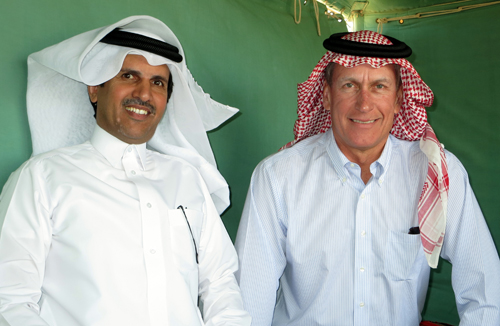