Tales of the Bedouin – Part IX: Travels with Stephen, Part 2

In this installment, Mark Lowey reminisces about a spur-of-the-moment weekend excursion in 1979 to Saudi’s northern neighbor, Kuwait. The details herein are from three sources: Mark Lowey’s daily journal and the memories of Mark and his colleague, Stephen Taylor, who was introduced in Travels with Stephen, Part 1.

“We’ll drive to Kuwait on Thursday.” In Steve’s mind, Thursday afternoon would be optimal, as it was the beginning of the weekend, and Fridays were our only full day off, giving us the option of an overnight adventure.

“What? How?” I scoffed. “Our passports are locked in the company’s office safe. Won’t we need them? What about an entry visa?”

"We’ll take the ‘Bedouin Highway,'” Steve declared, brimming with confidence and a glint in his eye.

I was age 23 and somewhat naïve. Steve’s idea sounded like fun. This would be my first opportunity to see Kuwait, the small, oil-rich emirate on the Arabian Gulf, nestled between Iraq and Saudi Arabia. I decided, “Why not?”

It was a typical workday at the Fazran GOSP-1 construction jobsite. I recorded in my journal, “Hot at Fazran. Bedouin women watering and milking their goats at the camel trough. Gave a set of photo prints (taken during our February visit) to that Bedouin kid (Saleh, son of Abdulhadi Alsy’ari.) A big windstorm came through in the afternoon blowing up sand and dust.”

Our work day ended at 4:00 p.m., and after an early dinner at the Abqaiq dining hall, we packed up the two-wheel-drive Chevrolet pick-up truck that Steve had borrowed from his boss and mentor, Pablo C., the Assistant Superintendent at Fazran. We loaded two metal Igloo coolers filled with ice and water, a couple of blankets, two wooden planks, in case we got stuck in the sand, and not much else. We didn’t broadcast our plans to anyone except, in confidence, to a close friend or two.

Around 5:30 p.m. we departed Abqaiq, driving eastward to Dammam and then turning north on the coastal road along the Arabian Gulf. In the remaining three hours of daylight, we passed Qatif, Jubail, Ras Al Mishab, and finally reached the small border town of Al Khafji after sunset. At a tiny local restaurant, we dined on roast chicken, french fries, and Pepsi. Nearing bedtime, we found a secluded spot on the beach behind some low dunes, just past the last Saudi coast guard station. 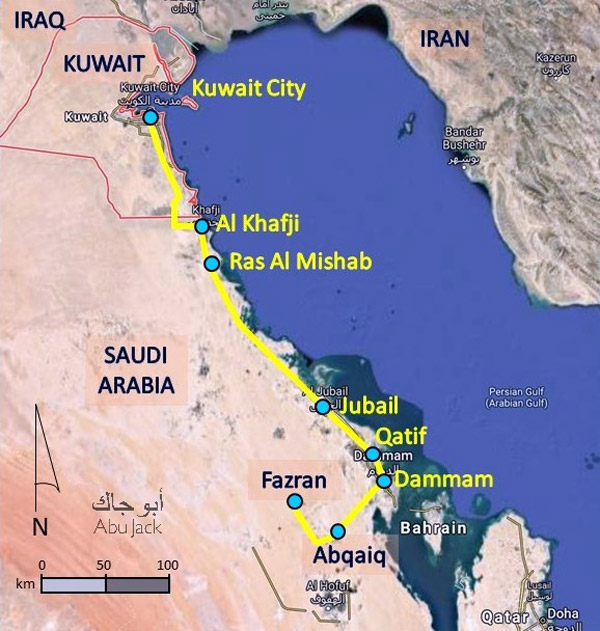 The route to Al Khafji and Kuwait City

The early summer night was windless, and the Gulf water shimmered in the light of the full moon. Luckily, the humidity was low and sleeping in the truck was surprisingly comfortable. We hadn’t thought to bring sleeping bags, so I stretched out on a blanket on the open corrugated bed of the truck, while Steve folded himself onto the bench seat in the cab with one door open. I was grateful to be in the back, as I couldn’t imagine fitting my 6’ 4” frame into the bench seat for the night.

Before coming to Abqaiq and Fazran in 1978, Steve had spent several years working in Kuwait, teaching English at the Ahmadi Training Institute. He lived in the oil town of Ahmadi with his wife, who was the secretary to the project manager of a pipeline project.

One day, his wife’s boss challenged him to learn how to weld sections of large-bore pipe together. Steve quickly learned the trade and soon became a skilled welder on the new oil pipelines crisscrossing the desert. As a construction man, he would become well-acquainted with the terrain of southern Kuwait.

We rose at first light. Breakfast was Arab pita bread with a slathering of imported peanut butter and local honey, poured directly from the glass jar. Inevitably some of the honey dripped onto the sand and was soon discovered by hundreds of large black ants. Seeing them, I was glad not to have slept on the ground. 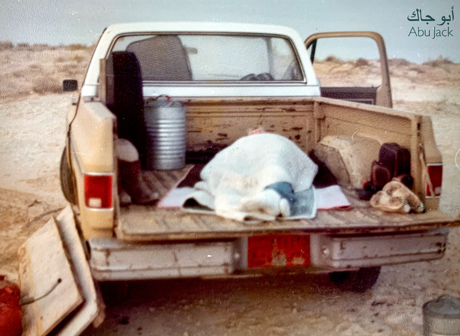 Mark sleeps well in the truck bed with the tailgate down to accommodate his legs.
(Photo by Mark Lowey, ©1979) 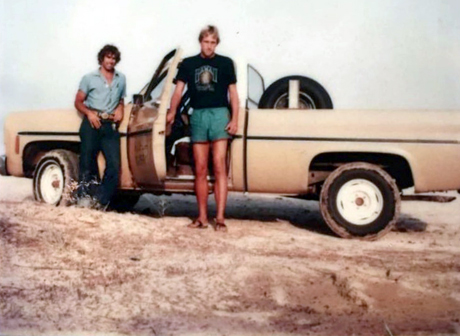 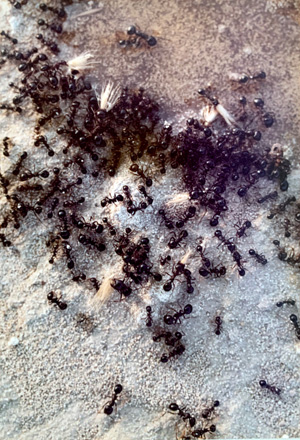 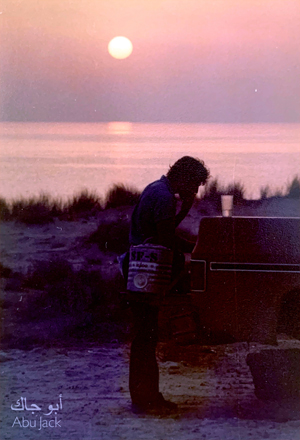 Steve brushes his teeth at sunrise.
(Photo by Mark Lowey, ©1979)

“After breakfast we hit the desert, watching the guard post towers – and that one ominous building. I gunned it over soft desert tracks and past Bedouin tents. We didn’t stop. Salt flats, sandy stretches. Followed the power pylons towards the road to Ahmadi.”

It was my turn to drive. We began by heading west over the sand, keeping an eye on the Saudi border checkpoint and customs building to our right. Steve checked periodically out the back window as the checkpoint building gradually disappeared below the horizon. Soon, all we could see was the elevated water tank. “If we can’t see the building, then they can’t see us,” Steve said.

Before us, the morning desert sky was a bright, sandy haze. Behind us, the sky was an intense blue over the Gulf, now out of sight. We were well clear of the Saudi checkpoint, and it was time to redirect northward towards Kuwait. Suddenly, in the distance, appeared an ominous, blocky building with dark-colored vehicles parked around it. We sensed that it might be a governmental or military complex. “So, we wisely continued west until the blocky building itself also dropped to the horizon,” Steve recounted. “At which point we reverted to the plan and headed north into Kuwait.”

As we continued to follow the twists and turns of the desert tracks, dubbed the ‘Bedouin Highway,’ we found ourselves approaching a cluster of several Bedouin encampments. More experienced, and ever mindful of the risks we might encounter on this journey, Steve thought to himself, “Oh no, what is going to be the reaction of a concentrated community of Bedouins at the sight of two gringos barreling through the desert at the border?” To his relief, we skirted by the encampments without incident.

Before long we picked up a north-to-south line of high-voltage power pylons. Steve knew that these would eventually cross the road to Ahmadi, his former home. 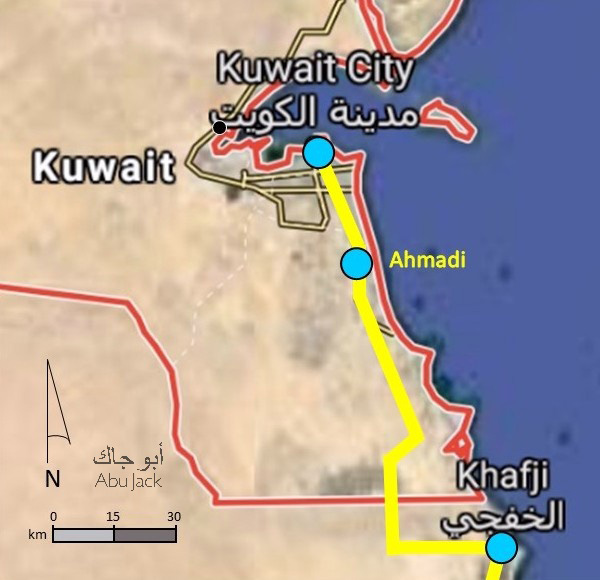 The desert route from Al Khafji across the border into Kuwait.

Traveling westward from Al Khafji, we detour to avoid a large mysterious building in the distance.
(Photo by Mark Lowey, ©1979) 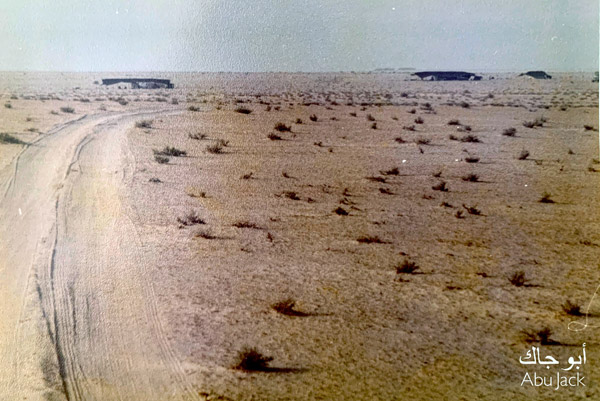 We sped past Bedouin encampments, wondering what they would have thought of us.
(Photo by Mark Lowey, ©1979)

It was quite a relief to leave the desert paths and feel our tires on the smooth, two-lane Ahmadi road. In Ahmadi, we stopped at a few houses, but none of Steve’s old friends was around. We continued northward and reached the 6th Ring Road of Kuwait City, passing a group of the distinctive black and white striped water towers.

Steve was now driving and, through the rear-view mirror, noticed a police car following us closely. Steve said, “Don’t look now, but...” Ours was an ordinary beige truck, but with tell-tale red Saudi plates. A pang of fear came over me when Steve said, “I’m going to take this next righthand turn.” He did, and, sure enough, the police car did not. We were safe – for now. 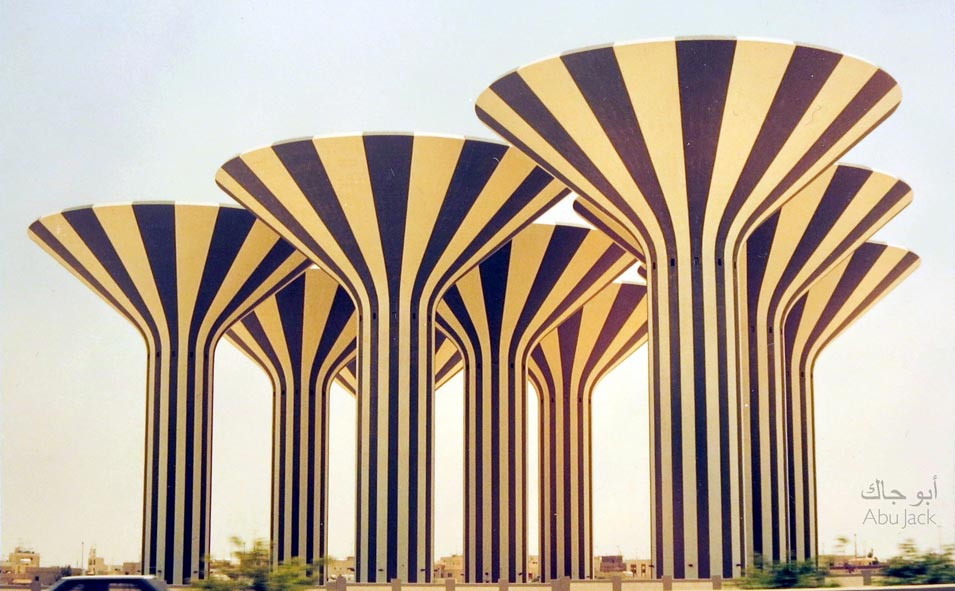 We headed to the west side of the city center and stopped at Al Jahra Gate, dating from 1920. It is one of five gates that were part of the original city wall. Naturally, we stopped for photos.

Mark and truck at Al Jahra Gate and the Tide detergent sign.
(Photos by Mark Lowey, ©1979)

The next stop on our city tour was the corniche, just down the coast from the brand-new Kuwait Towers. The towers’ revolving restaurant and observation deck had opened two months prior, in March 1979, but we had other ideas. 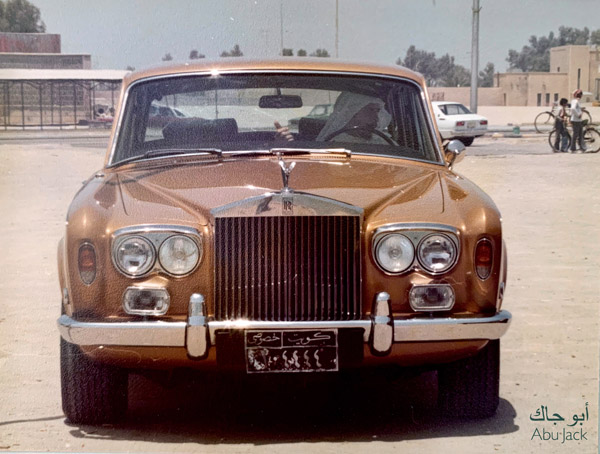 The temperature and humidity were rising by midday, so we crossed the coast road to the nearby Kuwait Hilton hotel. In the well-chilled coffee shop off the lobby, we enjoyed chocolate milkshakes and flirted innocently with the Filipino waitress. To commemorate the day, we purchased picture postcards and stamps and mailed them to ourselves in Abqaiq. 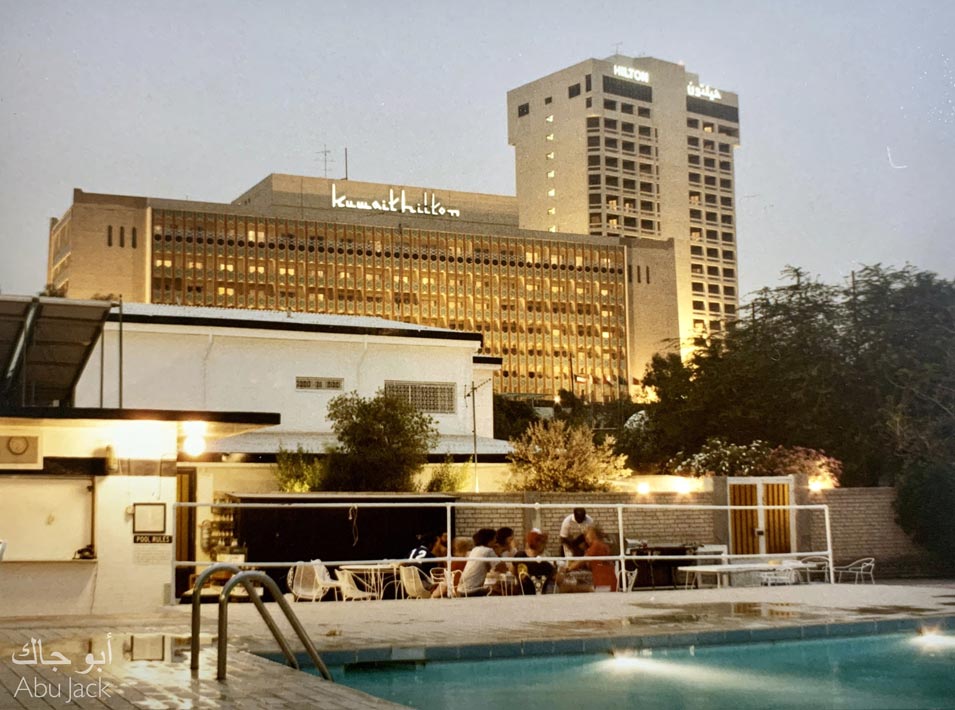 The Kuwait Hilton as seen from the US Embassy in 1985. Both have since been demolished and relocated.
(Photo by Mark Lowey, ©1985)

Refreshed and back in the truck, Steve continued with our tour. We paused at the beautiful Fatima Mosque, referred to by some expats as the “lemon-squeezer” mosque. We also visited picturesque neighborhoods and passed by the National Stadium, resplendent with giant portraits of the Kuwaiti emirs, Saad I, Sabah III, and Jaber III. 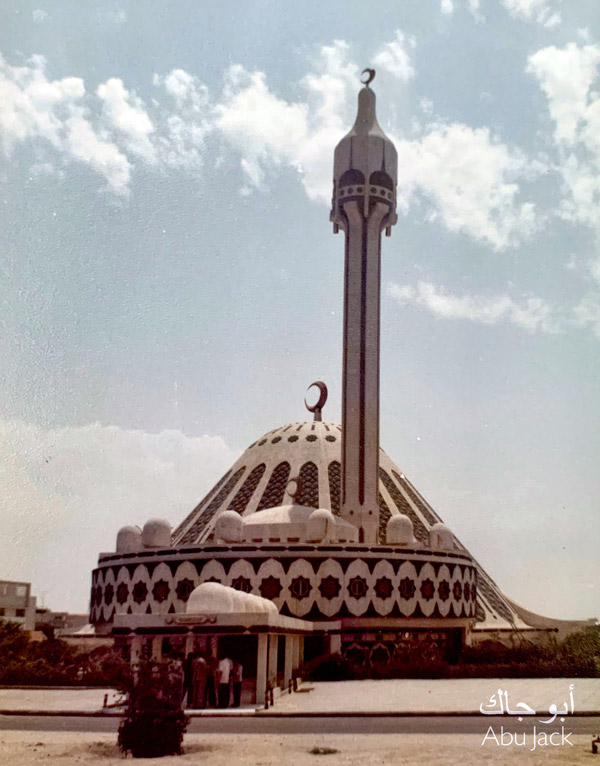 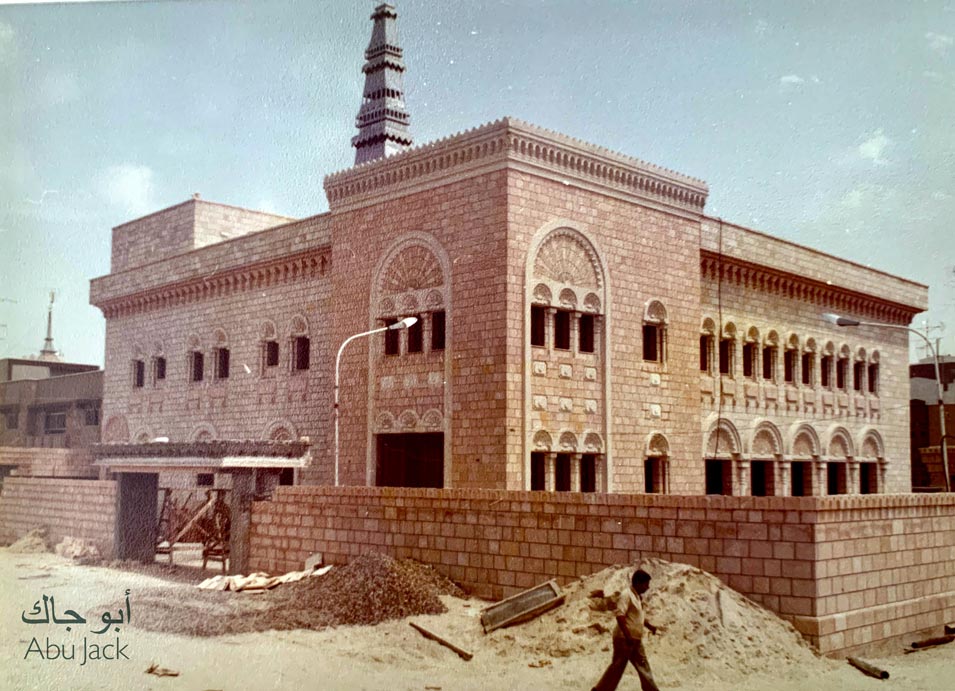 A mansion under construction in Kuwait City.
(Photo by Mark Lowey, ©1979)

Grilled Hamour and A Hubbly Bubbly

As the day wore on, our hunger increased. Steve knew just the place, the Perfumed Garden Restaurant. He knew the way there and the best place to park. The restaurant was an oasis with outdoor tables in a shaded, leafy garden. Its specialty, and the local favorite, was grilled, whole Hamour, caught in the Gulf that day, no doubt. The generous meal included flatbread, french fries, houmous, and pickled side dishes.

The Perfumed Garden Restaurant – we ordered the house special.
(Photos by Mark Lowey, ©1979)

Our hunger sated, and with thoughts of a long, and possibly risky, return journey awaiting us, we decided to order a post-meal hookah. A time-honored tradition in the Middle East, and now popular in many parts of the world, our tall brass hookah held a mix of dried fruit and tobacco, which was placed in the small bowl on top.

Often referred to as a “hubbly bubbly” for the sound it makes, the hookah burbled as we took turns holding burning coals against the mix with a tweezer-like device, drawing in long puffs of fragrant, cool vapor, through the long, tubular mouthpiece. The hot smoke cooled as it passed through a water chamber creating a pleasant bubbling sound as we inhaled. Full and content, we relaxed for a while, enjoying our hookah as the afternoon weather cooled. 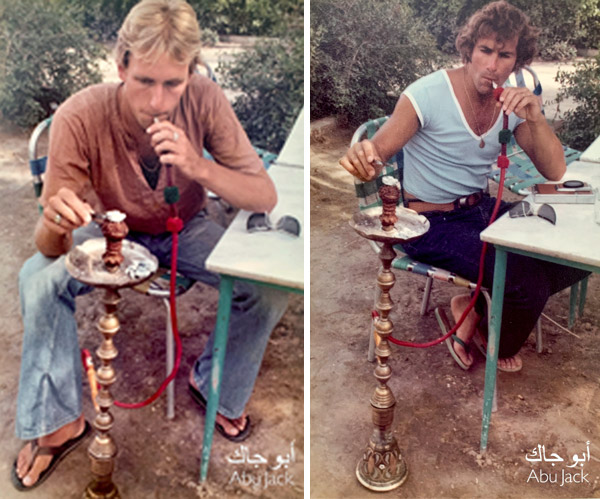 Without warning, this peaceful scene was shattered when an out-of-control vehicle on the street in front of the restaurant side-swiped several parked cars. How did Steve know to park in the side alley? Realizing that our weekend jaunt could have ended very differently, we took this as our cue to make a move. We paid our bill and were thankful to head back to our unscathed truck.

After an eventful day, we headed south and retraced our steps down the coast road past Ahmadi. We turned inland into the desert (just before the Kuwait border post), following the pylons south and across the border back into Saudi Arabia. Darkness fell near Ras Al Mishab, and I found myself becoming drowsy at the wheel. “Steve, you better drive.” “OK,” he replied, as we traded seats. It wasn’t long before I awakened to find we had arrived back in Abqaiq to our little, air-conditioned single rooms. 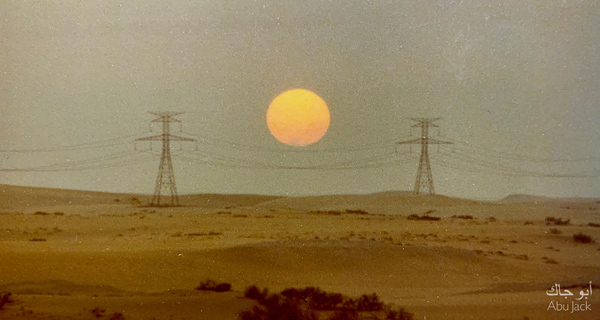 The setting sun as we follow the power pylons towards home.
(Photo by Mark Lowey, ©1979)

The next day, I rose at 4:30 a.m. and, as usual, met the van at 5 a.m. for the ride out to the Fazran jobsite – the start of another six-day workweek. The pickup truck had been returned safely to Steve’s boss, Pablo. We had driven 1,200 kilometers in 24 hours. If Pablo wondered where we had gone, he never asked. And we never told him. 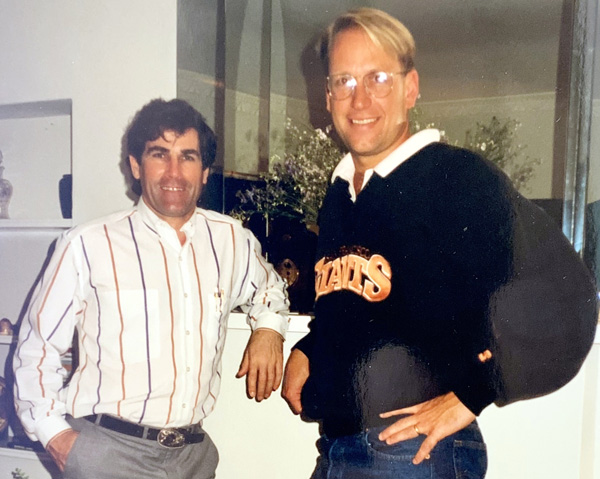 In 1992, Steve visits Mark at his home in Oakland, California.