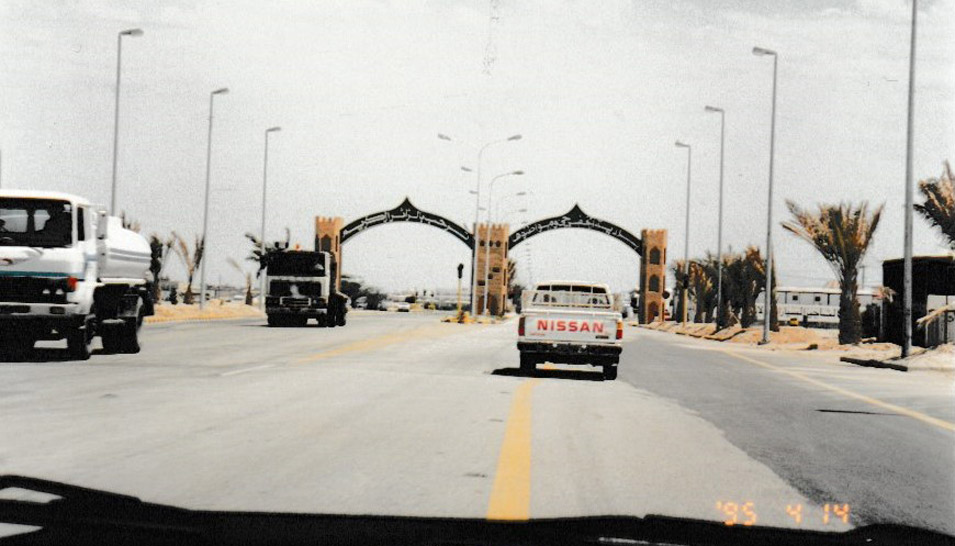 Photo from the first day of our trip on the edge of the desert, northeast of Jubail on the Tap Line road.

We leave Ras Tanura with our neighbors and friends yelling ‘goodbye and ma’a salama’. We say farewell to great friends of many years and drive out through the gates for the last time. It is very sad departing a place we have come to really like over the years and a place that has been good to us and for us. The Aramco Saudi security guards at the gate wished us ma’a salama and good luck. In this community, everyone knows what is going on and our departure to travel overland is well known. We wheel out through the gates and onto the two-lane road that runs parallel to the town security fence, and we are on our way. Turn right at the old Jumamma construction camp, and passed the Jumamma gas plant. We bump across the sand and cut through a hole in the highway fence onto the six-lane Jubail highway. We crank up the speed, shifting through the gears to a normal cruising speed of 140 kph which is 20 kph above the posted speed limit but well below the 190 kph of the faster cars. We zip past the old fishing port town of Jubail located on the Gulf coast, which has been transformed from a small fishing village into a commercial port and an industrial complex of chemical and oil processing plants. North of the town, we turn off onto a smooth two-lane road laid by US Marines during the Gulf War which cuts across the desert, passed the new Jubail airport, to link up with the six-lane, Abu Hadriyah highway. The air conditioning pours out cold air, as even in December it’s now in the upper twenties outside with an overcast sky that matches our moods, and it appears a storm is on its way.

We pass Abu Hadriyah with its police station, a gas station and shop. The road passes to the left of the Aramco Abu Hadriyah and Kurnsener gas/oil separation plants and oil pump stations before we turn off the highway onto a slip road that crosses over the highway on an overpass. The four-lane road is a bit bumpy as it heads west away from the coast and into the desert where it joins the “Tap-Line road”. This road runs for thousands of kilometers across the open desert alongside the oil pipeline that links the Aramco oil facilities to Jordan. We follow the road northwest passed the town of Al Nairyah on a degrading road surface that narrows to two lanes. With thousands of kilometers to travel along this road, its condition has us a little worried for a while; however, we are reassured when the road returns to a smooth, four-lane highway. The road passes the towns of As Sadawi and the large military base and town of Hafar al Batin. The skies are clearer and the outside temperature is cooler when we stop on the edge of town and fill up with 58 liters of fuel and buy a liter of milk. 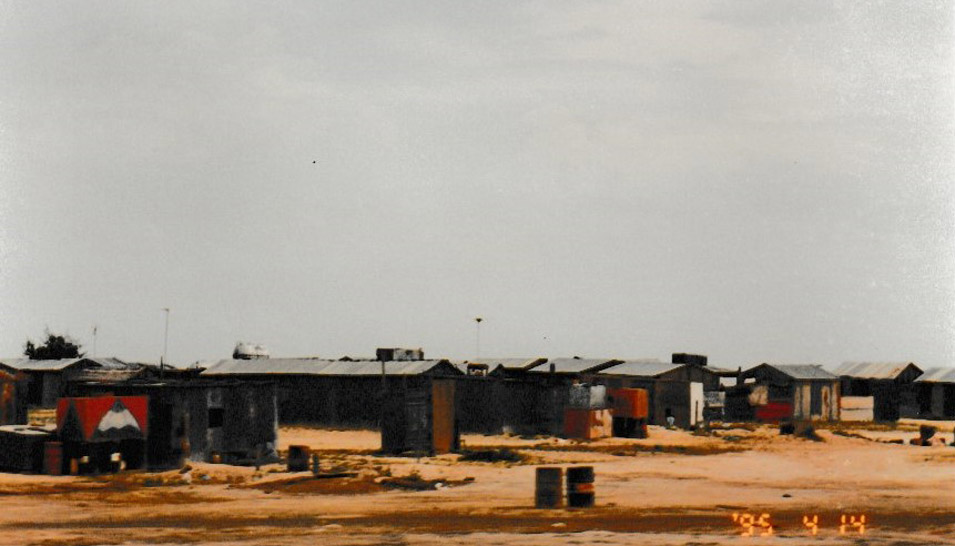 Photo from the first day of our trip on the edge of the desert, northeast of Jubail on the Tap Line road.

Northwest, we go through the towns of Rawdar lbn Habbas and Rafha on a deteriorating two-lane road and into the darkness. Dark comes early in Eastern Saudi Arabia. Our plan is to drive all night to the Jordan border with short breaks as there are few hotels and none that rate a fraction of a star or the presence of women. The road becomes busy and dark, with large trucks which sometimes only have one headlight and sometimes none and the one light could be any color. We pass by the town of Al Uwayqilah, and at seven in the evening stop in the large and busy town of Arar. We fill the tank with 72 liters of fuel and grab some food. A greasy chicken meal and coffee is consumed in the Al-Taiseer Hotel for a cost of SR30 ($9). The locally produced sign states it is a four-star establishment; however, the star rating is not a good reflection of the place and it cannot be recommended. We both feel a bit sick after the meal but the washrooms are acceptable and the hotel did fill our flasks with hot water.

Driving along the pitch-black road, approaching the town of Turaif, we are stopped at a police checkpoint. There is some initial police concern, not unexpected really, considering the sudden appearance of a white man and woman in the middle of nowhere in the middle of the night. It’s a little scary at first as the police speak no English. With our limited Arabic and our expired Aramco identification cards, we managed to convince the police that all is well. They recognize the company logo on the identification card and know that white Aramco people do strange stuff, like driving around the desert at night. The police concern turns to handshakes and smiles and we are waved on our way. About half a kilometer after the checkpoint, in the middle of the dark town with no street lights, the road is dug up and a detour is in place. We become completely lost and drive around in a circle before we sort ourselves out, get our directions correct, and find the route out of town. As the night progresses, we become weary and pull off the road into a dark and gloomy gas station parking lot. We park among several large, dirty, old transport trucks, and with the temperature dropping fast, cover ourselves in coats and blankets and try to grab some sleep.

Photos from the first day of our trip on the edge of the desert, northeast of Jubail on the Tap Line road.

Four hours later, at two in the morning, we awake, freezing cold and stiff, and decide to move on. With 1,433 km since the start of our journey, the engine is started, and we are on the road again with beautiful heat flowing into the Discovery. It is a great relief to discover that the heater works very well, as we never have had reason to use it before. After several hours of driving, the major town of Kaf is bypassed and we come to a major road junction in the middle of nowhere that is not marked on our maps or notes. After a discussion, we turn right and continue along the road with the temperature inside automatically controlled at a very pleasant, warm setting. Weariness returns, so we pull into another gas station parking lot and park beside a Mosque to try to grab a couple of hours' rest. We are now close to the Saudi/Jordanian border crossing which we plan to use and know that the Saudi police supervisor will not be there to process our paperwork until later in the morning. So, there is little point in rushing.

At six in the morning, we are woken by the cold, a dog barking non-stop, and the prayer call being pumped out of the Mosque loudspeakers beside us. We are surprised by how cold the temperature is here in the middle of the desert. It’s so much colder than the coastal temperature we are used to. The Discovery engine is fired up and the heater produces lovey warm air as tea is drunk from our flask and sandwiches are eaten. As daylight arrives, we drive over to a fuel pump that is just opening and top up with 35 liters of diesel, our last in Saudi Arabia. Then we head for the border.