Crossing the Bosporus bridge, in the background, from Asia to Europe. Riding the ferry on the Bosporus from Eminona.

After a good breakfast at the hotel, we fill up with 45 liters of diesel at a cost of TL 5,100,000 on a very cold and frosty morning. It is a pleasant drive along the coastal road to the E-80 toll road, which we join. With few readable signs, we become confused about which highway we are really on and where we are going. We also try to establish which bridge we need to use to cross the water. This results in a number of U-turns before we finally find the correct road and cross the long bridge over the Bosporus in heavy stop-and-go, traffic.

We have crossed from Asia into Europe -- Whoopee!!! -- on an excellent motorway and huge bridge in busy traffic into Istanbul. It's a big and very busy city, with fast cars, trucks, buses and people. As usual for us entering a big city, we get hopelessly lost and confused and as this was a very big city it is worse than usual. The inside of the Discovery Land Rover is blue with curses. Many, many U-turns later, we work our way down to the coastal highway on the southwest side of the city and find the old city walls. Driving along beside the walls at high speed to keep up with the locals and to remain with the flow of traffic, we discover a gate and zoom through it. Once through the old city gate, we are trapped. We drive up and down narrow streets until we find the 4-star‘ Hotel Armada’. This hotel is inside the old city walls and is an excellent place in a great location beside the coastal highway and the city’s famous places. Noinin is able to beat the price down to $100 per night, for three nights. It is a lovely area; old world, cobbled streets, horse-drawn carriages and a ten-minute walk to the ‘Blue Mosque’ and Topeka Place. 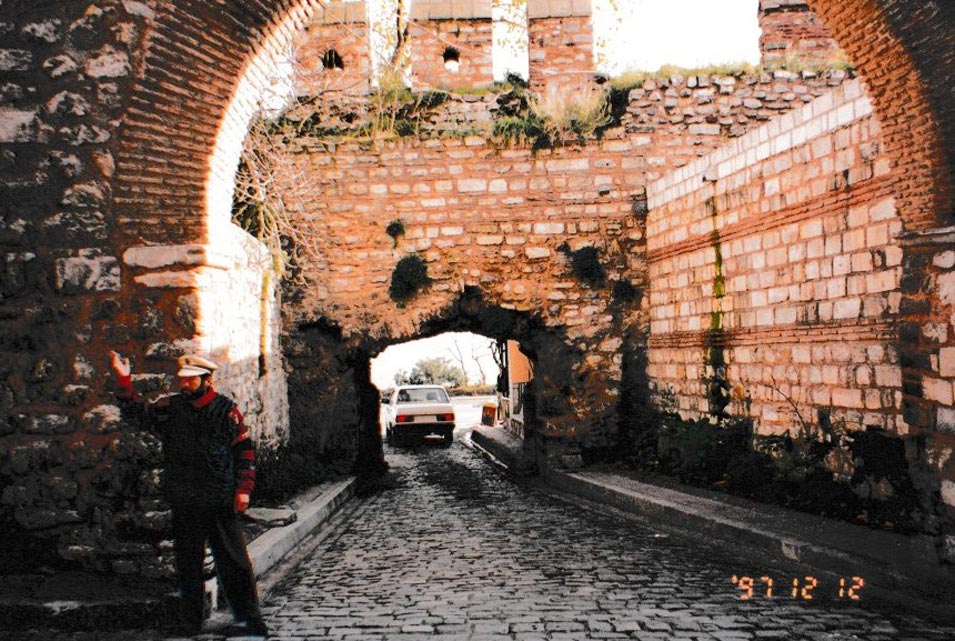 Pee-pee guarding the city gates and our Land Rover.

We have to leave the Discovery parked on the street as the hotel claims it is too heavy for the wooden ramp into their underground parking lot. They could be right. We befriend and hire a local traffic warden/controller, who we call ‘Pee-pee’ as he is always blowing, or peeping his whistle. There is strict parking control in the old city and the tow trucks are continually hauling away incorrectly parked cars but the combination of ‘Pee-pee’ and the hotel protect us from getting into trouble. We walk around a bit of the old city and after a lot of work, I am able to exchange my Syrian pounds at a terrible rate, of course!

The following day was planned to be a none-driving day, but the Discovery needed an oil change and I had spotted an oil change place about 5 km along the coastal highway. It is on the opposite side of the divided highway, but that should not be a problem...I stupidly thought. We leave our dirty washing at a local laundry mat and go our separate ways; Noinin to the Grand Bazaar and shopping, and Ian, with the Land Rover, along the divided 4-lane coastal highway to find a break in the road to reach a service station on the opposite side of the road.

Ian at the entrance to Topkapi Place and some of the displays inside.

The Discovery speeds passed the service station on the opposite side of the divided highway, at the same 120 km speed as the rest of the traffic, but there is no break in the wall dividing the road to allow a U-turn. Many, many, kilometers later there is still no way to make a U-turn and the Discovery is travelling at 120 kph in the wrong direction. As there is no break in the road divider and I am miles away from where I want to be, I decide to take the next right turn. Bad move, as the right turn goes through the old city walls into a maze of narrow, single-lane, twisty, side streets containing parked cars and roadwork. At one point, the one-way street is dug up and 4-wheel drive and a 45% tilt are required to proceed. Much later, after an enforced sightseeing trip of many city streets, the Discovery, with a very frustrated driver, arrives back on the same side of the same divided coastal highway it left an hour before. I am forced to continue along the highway with no breaks until another right turn is made, which is also a mistake as this new road is also a divided road with no means of making a U-turn. The "Disco" is in the outside left lane, ready to make a U-turn, blocking the lane and making the driver of a red Ford Mustang behind very mad, as he is trying to overtake and informing the world by flashing his headlights, blowing his horn and sticking fingers and arms in the air. Some, if not all, of these rude gestures were returned by the frustrated driver of the Land Rover making the Mustang driver even more unhappy. As it was again realized that a U-turn could not be achieved, the Disco changed into the right lane, ready to make another right turn, just when a very upset Mustang driver chose to pass on the right side. There is a lot of brake, tire, and horn noise plus yelling but no impact before a stop is achieved and the Mustang driver leaned across his male passenger and pointed his hand straight at me. I looked at the hand and realized it contained a gun, which was pointed directly at me. As the hand and gun details are noted, the brain started to function, possibly a little late but better late than never, and realized the Mustang was stopped at right angles across the front of the Land Rover blocking its path forward. With eyes firmly fixed on the hand and gun, my right hand selected four-wheel drive, low, and my right foot increased engine revolutions to max as the left foot lifts off the depressed clutch to launch two tons of Land Rover through and over the Mustang and its passengers as the shot is fired. The Mustang passenger is made of calmer stuff. He pushed the driver's arm down and waves him back to his seat to get going. The driver reluctantly complies and with a final rude gesture drives off as the Land Rover engine returns to idle speed.

In a bit of an anticlimax the Disco is turned down another side street and is slowly driven through many more kilometers of back streets for an hour or so, until finally the coastal highway is crossed by a bridge.

The return trip along the highway finds the service station where seven liters of oil are changed along with the filter by an old man lying on his back in the wet. He is very careful and finds that the last person to replace the oil drain plug, the Land Rover agent in Dammam, had over-tightened it and damaged the threads. Great! Just what is needed in the middle of Istanbul. The smart old man is able to wind a thread around the oil plug and secure it in position in the oil pan. The cost is TL 7,500,000, about $35. The Discovery then receives a much-needed hand scrub, wash, rinse and dry for TL1,000,000 ($5). Back on the coastal highway and, guess what, a bridge across the road and into the old city, a couple of U-turns and detours, and Ian along with the Discovery are returned safely to the hotel. After some hesitation, the story is told to Noinin who is not pleased, as she wonders how many days she could have been detained in Istanbul with a dead husband and blood-stained Land Rover.

A late lunch, consisting of very fresh fish in equally fresh bread, is bought from fishing boats tied up at the smelly quay beside the ferry port and is eaten as we walk along the street. The food is cheap and tastes great, two excellent requirements, however, it produces a reaction to my innards.

After looking around, a ferry is taken from Eminona, the ferry port for old Istanbul, across the Bosporus to the town of Uskudar on the Asian shore. We have a quick walk around before boarding a ferry back across to Besiktas, a town further north on the Bosporus on the European side. On arriving, we find we are a long way from our starting point and because of restrictions on the ferries, which do not appear to travel along the shore but sail back and forth across the Bosporus, we have to return by crossing the Bosporus twice more. Finally, back at the hotel, slightly bored with Bosporus boat trips, we launch into a couple of stiff G & T’s. Then out on the town to collect our laundry before walking around this exciting city and dropping into a busy coffee house to consume coffee and cakes.