Heart and Soul – At Work

Starting a first job is a challenge for most people and it was no exception for the intrepid young Ali Al-Baluchi. Braving bicycles, sandstorms and cultural differences, we will observe in this third extract from Ali’s Memoir how he started from the bottom as a mere office boy and learned to navigate the demands of a formal workplace whilst winning the hearts of those around him in his own unique way. 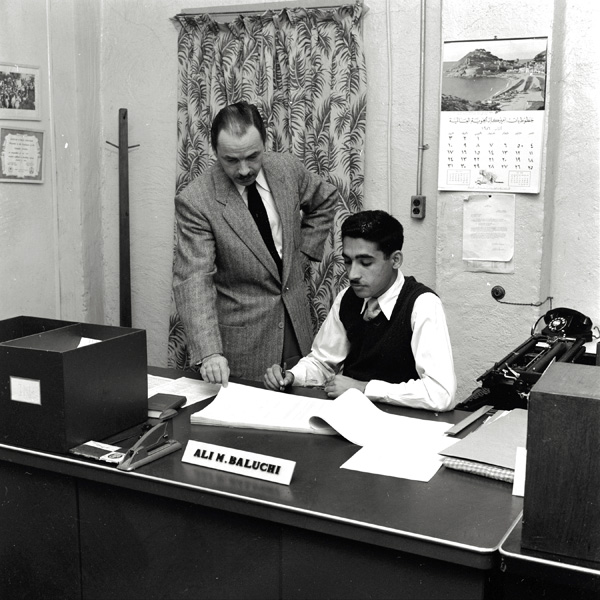 At work with Don Richards.

February 15, 1949 was the date I started working for Aramco, on the grand salary of 90 riyals per month. Once the formalities were completed, I was assigned to the office of the Superintendent of Schools, Mr. Don Richards, as an office boy. His secretary, Mrs. Marsha Naylor, was my immediate supervisor. Initially, I worked in the office for four hours a day, spending the remaining four hours with the study program.

In this position, I was expected to deliver mail and messages between the offices for the superintendents of schools and training and to work as a typist. I found myself laboring alongside a Pakistani gentleman who was quite reluctant to teach me typing because he was worried that I would take his job. During the lunch hour, when this man left the office, I would retrieve wastepaper from the trash can and use it to practice my typing. Eventually, when my skills had sufficiently improved, I did replace him, and he subsequently left the country. Many years later, the man contacted me and asked if I would sponsor him to return to Saudi Arabia for work. I agreed, but only on the condition that he teach his job to two Saudis while he was here. He agreed to the arrangement, and then worked in the Kingdom until he retired.

My boss, Don Richards, bought me a bicycle to help me deliver mail more efficiently between the different Aramco office locations. Each Thursday, he encouraged me to take the bicycle home with me to Al-Khobar to have fun with it and enjoy it over the weekend. I took it once and was somewhat bemused to find myself riding a bicycle from Dhahran all the way to Al-Khobar. It was something I had never thought of doing before. The outward ride proved relatively easy because the inclination is downhill but returning to the Aramco camp on that bicycle was a lot more of a challenge! I decided that trying it the one time was definitely enough. I remember Don Richards as a very nice guy. I later heard that, when he retired and moved from the Kingdom, he went back to the United States and became the head of the Chamber of Commerce in Bakersfield, California.

I gave all the money I earned to my parents. However, my father used my first paycheck to buy me a watch — a West End-style watch from the Al-Khobar shop “Shukri.” Later, my mother saved up my money so she could go to Makkah for the first time.

Once I became an employee, things started to change. For starters, I had to travel between Al-Khobar and the Aramco facilities with the other local workers in a big open truck. This was only used for the transportation of employees early in the morning and late in the afternoon; the rest of the day, it was used for hauling pipes and cement. On two days in the early 1950s, I was late and missed the Aramco truck — then I had to walk for eight kilometers!

Besides me, my friend Saif Al-Husseini and the other trainees who lived in our area used this free company transportation. As well as the workers from the labor pool and those toiling in the Aramco trade shops and drilling, there were accountants from the small accounting office and IBM. Because the truck was open to the elements, I would often get to work covered in sand and dust. On one particular occasion, my immediate supervisor, Mrs. Naylor, stopped me as I arrived and asked, “Where have you come from?” I told her I had just come from Al-Khobar. She replied that I looked more like I had just come out of the desert! “And,” she observed, “it looks like you’ve encountered a lot of difficulties to get here along the road from home.” Of course, my hair was full of dust and cement. I assured her it was only that we had been transported in that same big, dirty truck that Aramco usually used to haul pipes and cement. She immediately sent me to the restroom to get cleaned up.

I was privileged that Mrs. Naylor regularly allowed me to use the washrooms designated for management. I only experienced one incident during my career that felt at all racist. Not long after I started working, I happened to quench my thirst at an indoor drinking fountain and was promptly told that the drinking facilities were segregated for Arabs and non-Arabs and, as an Arab, I was required to drink instead from the one outside!

When I started working for Aramco, my father was quite insistent that I continue to wear Saudi garb and not change to Western-style clothing. One day, Mrs. Naylor returned from her vacation in the United States and Spain with some nice trousers, which she gave to me as a gift. However, my father was determined I should not wear them and told me to keep them at home. Then, in 1951, my father moved from customs work to the National Guard. I came home from work one day and found him smiling, which was unusual as he was a tough man who did not easily smile. I asked him, “Why are you smiling?” and father replied, “You win. Today we were told at work that we all have to wear Western dress, so now you can wear the Western dress you received from your boss too.”

I was so excited that I wore my new trousers to work the very next day, even though I didn’t have a shirt to go with them — only a thobe that I tucked into the pants. Mrs. Naylor took me to Don Richards to share the news, but it was a while before I was able to spend my 90-riyal monthly salary on a couple of shirts.