Ali Al-Baluchi was born in Saudi Arabia soon after unification. Against the backdrop of a conservative society confronting a rapidly increasing pace of modernization, he witnessed and participated in decades of significant social and economic change. Colored by Ali’s inimitable candor and humor, this series of extracts appearing in Aramco Expats from his recently published Memoir, Heart and Soul, will reveal rare and personal insights into the circumstances and experiences that shaped an impressionable young Saudi boy into a much-revered foundational pillar of the Aramco and Eastern Province communities. 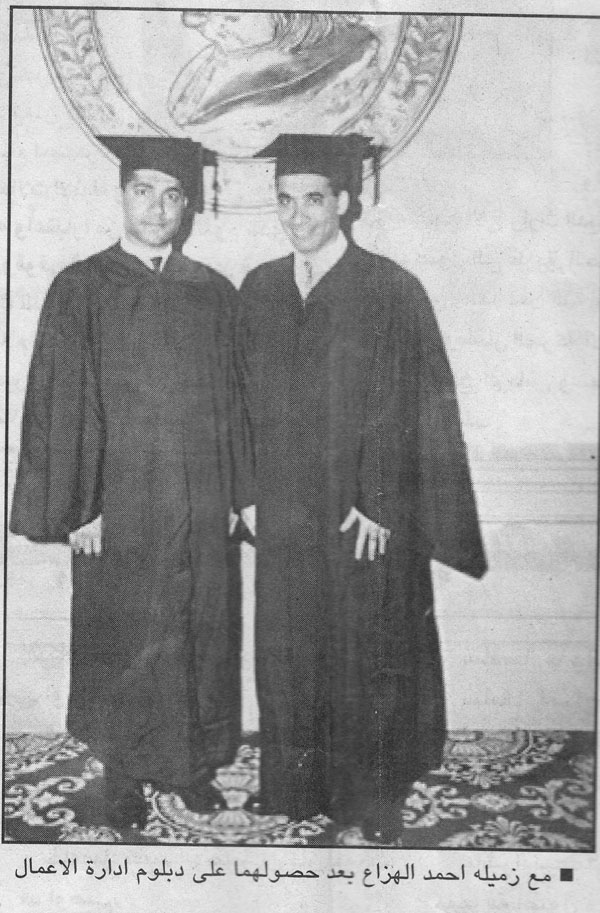 Ali and Ahmed Al-Hazza at graduation.

As Ali Al-Baluchi worked hard to establish his credentials within the Aramco workforce, opportunities to study overseas began to arrive. With his cordial personality and winning Saudi charm, Ali quickly formed friendships wherever he went, and even found himself representing the Kingdom in international student forums. In this fourth extract from Heart and Soul, we discover that not every experience was a good one, but that even difficult challenges could provide positive learning opportunities.

At the other end of the spectrum, I also had a somewhat thought-provoking experience in Philadelphia. While walking near City Hall with some fellow students, we stumbled upon a group of three young kids, who turned out to be homeless. We invited them to our apartment to eat and shelter. We treated them as if they were royal guests, sharing our very best Saudi hospitality! 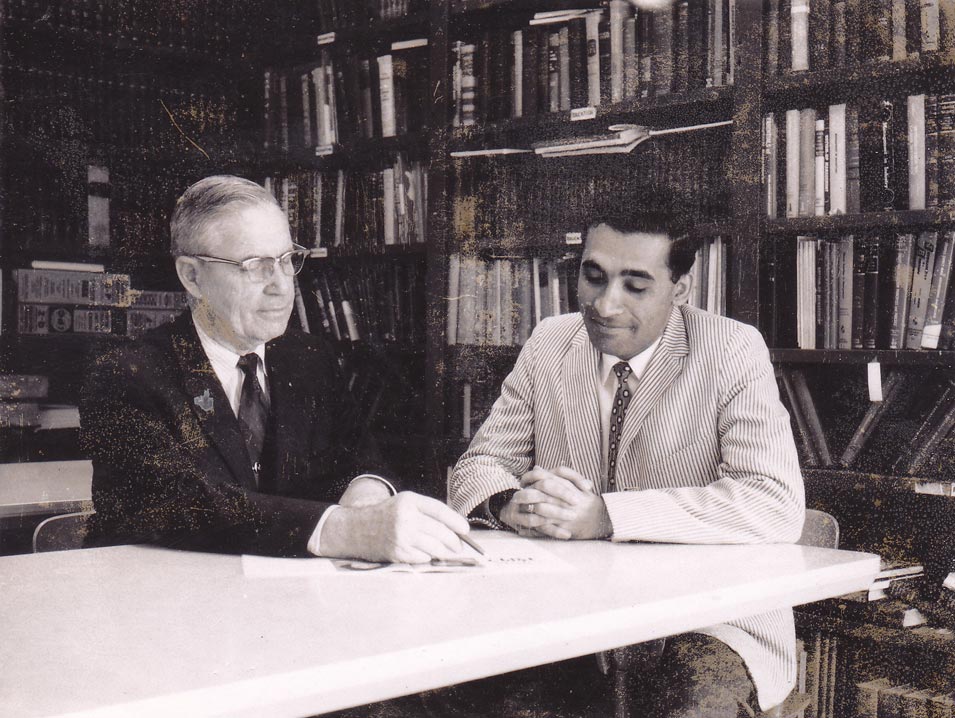 Receiving some personal attention from the Dean of Peirce.

When we later returned from college, we discovered that the homeless children and a few other things, including some cash, were missing from the apartment. A laundromat owner near the apartment had seen our guests walking out of the back door. It seemed the three we had treated as guests returned our kindness by becoming thieves!

At a later date, my apartment partner, Ahmed Al-Hazza, and his friend Abdullah Ghanim happened to bump into one of the perpetrators and insisted on the return of all they had taken. They even accompanied the kids back to their hideout, where they were able to discover and retrieve some of the stolen items, including my alarm clock!

Because the apartment we leased was close to Peirce School, we regularly invited our classmates, and I can thankfully say we never experienced any problems with them. In fact, many of them stayed in touch with us for some time after leaving college, which we greatly appreciated and cherished.

One evening, my friend Ahmed Al-Hazza and I decided to throw a special party for all our friends in Philadelphia. At the end of the evening, he decided to drive a friend back to their home outside of the city. On the way, he somehow managed to drive straight through four red lights, assuming it was okay to do so at that time of night if there were no traffic police around. Unfortunately, a policeman was waiting for him at the last set of lights and he was stopped. When he was asked to account for why he was jumping the lights, Ahmed endeavored to claim that he was a new foreign student with little English and had not yet learned all the road rules.

The policeman was obviously suspicious of the English Ahmed could speak, so asked to see his ID. When he saw that Ahmed was from Saudi Arabia, he told him that if he continued to jump red lights as he had on this particular evening, the punishment would be as severe as having his hand cut off! As it was, Ahmed wound up with a 10-dollar traffic violation. 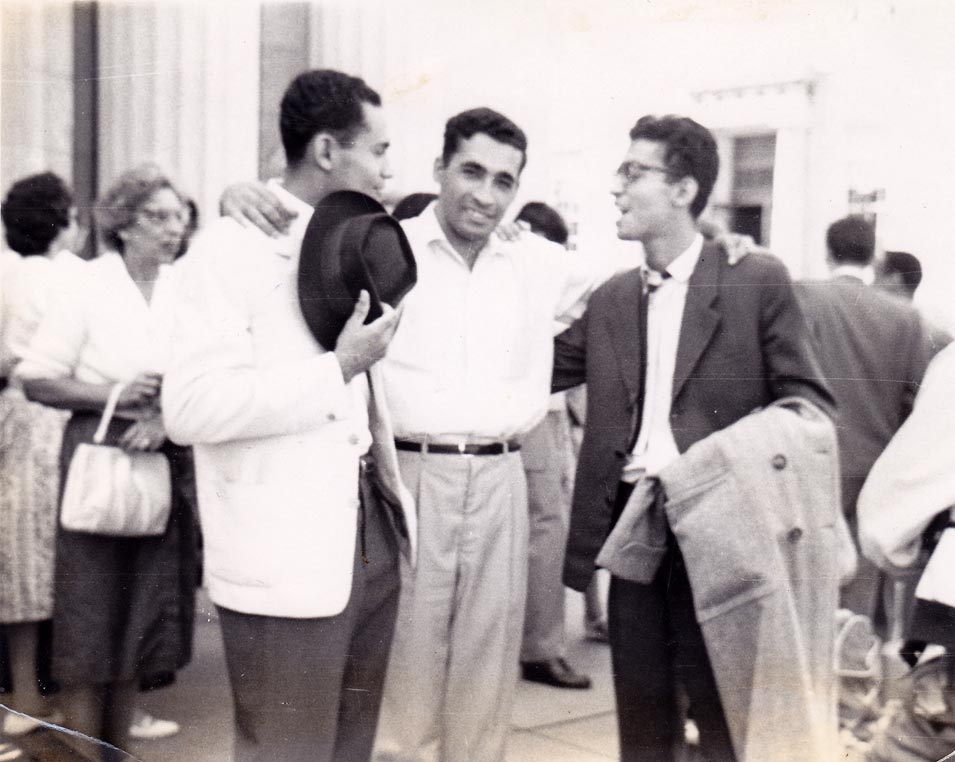 Saying farewell to summer school students at Lewisburg bus station after the program.

Another memorable occasion occurred after we had been given advance notice of an impending visit from a certain Mr. O’Grady. He was one of Aramco’s training advisors at that time. Ahmed Al‑Hazza and I were so excited about his visit that we undertook a frugal diet for several weeks in advance so we could save enough money to take him to dinner at the popular (but expensive by student standards) Bookbinder’s restaurant. Our dinner and evening with Mr. O’Grady went well, and Ahmed and I were both satisfied that it had been a most enjoyable visit for all concerned.

A few weeks later, however, we received a letter from Mr. O’Grady informing us that he was decreasing our living allowance from 260 to 210 dollars a month. He obviously thought we were living too well and had too much money if we could afford to eat at such restaurants! We were quite dismayed! I tried looking for a part-time job in Philadelphia to make up the difference, but I was unsuccessful, largely due to labor union regulations about employing foreign students.

During my next visit to Saudi Arabia, I discussed the matter with my father. He agreed to make up the 50-dollar difference each month. I learned a lesson — we went out of our way to be nice to Mr. O’Grady, but it backfired and ended poorly for us!

All too soon it was September 1962 and time to return to work in Saudi Arabia. Once home, I was to be assigned to the position of Personnel Advisor.