What Does It Mean To Be An Aramcon? A Reflective Essay

What does it mean to be an Aramcon? How exactly is our identity both similar and different from all those that are bound by the Aramcon story? These are some questions that I’m thinking about lately.

Identity is often expressed as a reflection of our perceived self through our set of experiences, relationships, hobbies, values, and memories—all these factors contribute to a sense of self that impacts our self-esteem and the way we interact with the world. The intersectional nature of our identity might lead to the conclusion that there are never any commonalities and we are all uniquely different. This is true. But I’m more interested in exploring the ambivalence of identity — a set of contradictory experiences that are held together in the same space, such as: we are similar, and we are different; we are happy, and we are sad; we are hopeful and fearful; we feel grateful, and we desire for more.

The contradictory nature of human emotion is one that I often grapple with, and I suspect the ambivalent nature of emotions carries over to our identities. Our identity is intersectional by nature, and being an Aramcon is held in the same line with being x, y, and z. The amalgamation creates our individual footprint in the world, but our common denominator of being an Aramcon invariably also impacts that individual footprint, and there is some meaning to be found in that. 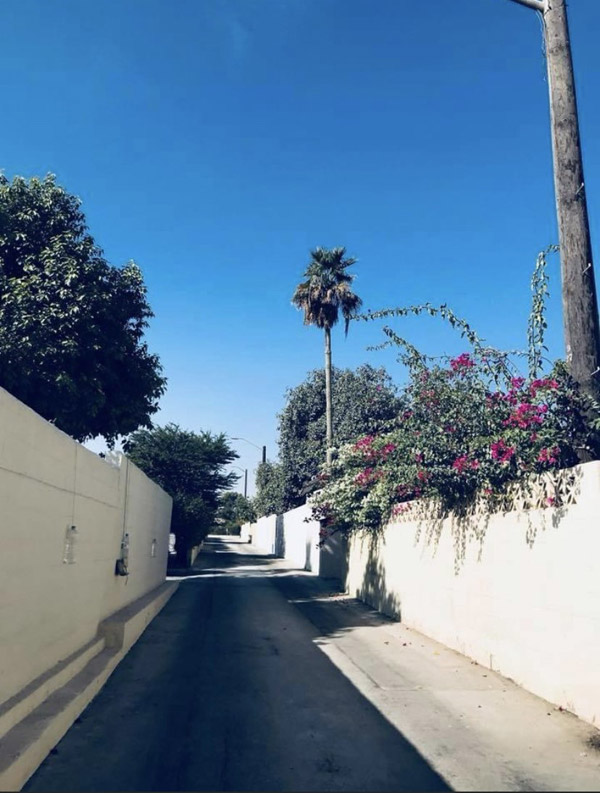 Alleyway near Elderberry Avenue, across the Third Street Track in Dhahran.

Growing up in Dhahran, I saw numerous variances between people—different payroll statuses, different cultural and ethnic backgrounds, different sets of prior life experiences. In some instances, these differences were pronounced in social interactions. Yet, despite these differences, there was an Aramcon identity that was isolated from the factors mentioned above —passport type, payroll status, cultural and ethnic background, all of that. The isolation occurred through the nature of the experience of living in a community that was so uniquely beautiful and historically meaningful for both the creation of the Kingdom, and its alliance with the United States.

Living in the Aramco compounds sometimes had its challenges in terms of finding entertainment, “things to do,” per se, but for many of us younger kids and teenagers, such a “lack” propelled us to make something out of nothing. Bored on a weekend night? Let’s go cruising with the music on. Driving down Rolling Hills Boulevard with some of my dear friends is still one of the profound memories of my time there. While there wasn’t a plethora of restaurants inside, that lack also made Olive Garden & Tandoori House the precious gem of a restaurant. I can recall countless nights and afternoons spent with friends and family chatting away about whatever was going on in our lives, while we sipped on the Saudi Cocktail and ate Chicken in Garlic Sauce—one of their best delicacies! That one restaurant began to signify the big and the small alike —the celebrations and birthdays but also the aimless weekends and a casual drop by for chicken biryani on a Tuesday night.

The same applies to other places in the Dhahran Camp — the Dhahran Dining Hall, the Bowling Alley, the Hobby Farm — it all holds a special charm and place in my heart. These places became bigger and held more space in my life because there weren’t a lot of places to aimlessly go in the camp. Perhaps this notion of our identity is like those who grow up in suburbs. The smaller emblems take up bigger space in our hearts and that experience is uniquely tailored to all those who were inhabitants of that town. 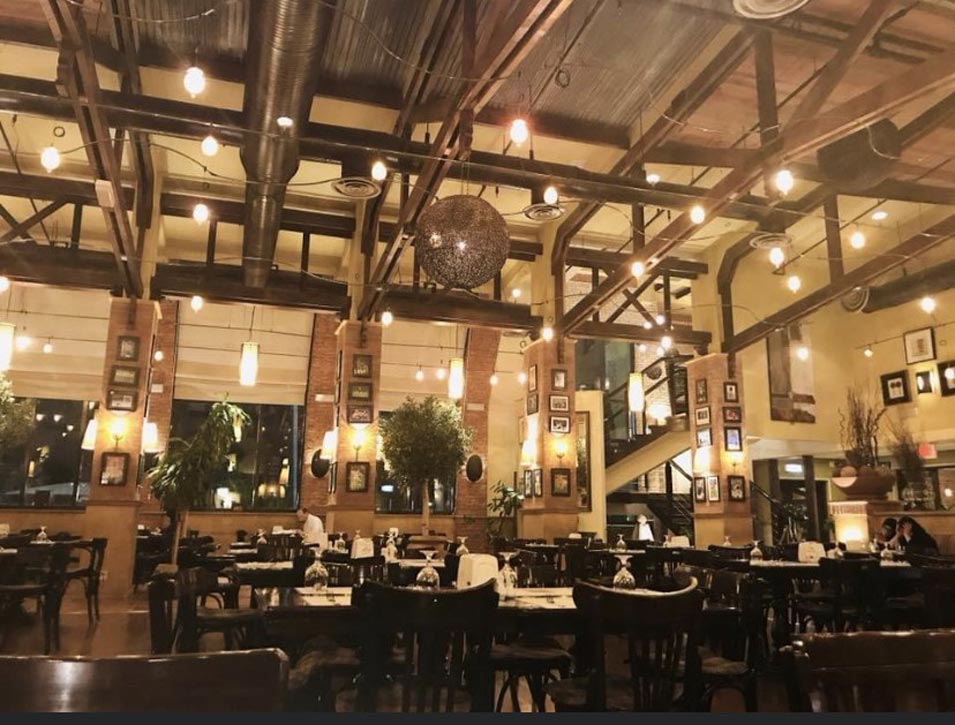 Interior of the Tandoori House & Olive Garden Restaurant in Dhahran.

Being an Aramcon, in my worldview, opens our perspective and knowledge of the world. This happens both through travel but also by interacting with countless people who are dissimilar to our identity. Through that interaction of the “unknown,” our knowledge of the world, cultures, languages — it all becomes a little more illuminated.

Being an Aramcon brings about a sense of wonder and jubilance whenever we go abroad and meet someone who also grew up in Saudi Arabia. I’ve encountered many such instances in professional settings and the commonality of the expatriate experience, Aramcon or not, immediately generates an invisible thread of connection between two people. In other words, maybe we don’t know what it is to be an Aramcon until we leave the Kingdom and forge our other identities with stronger force. While we do that, the Aramcon identity is still embedded in our story, so whenever we hear “Expat/Aramcon/Saudi…” our senses immediately try to pull that Aramcon identity back up to the surface. What is more nostalgic and wholesome than sharing about your meaningful past with a stranger who just so happens to harbor a similar story?

A part of being an Aramcon, to me, also includes a yearning, a longing, or saudade—a Portuguese word for a “sad state of intense longing for someone or something that is absent.” When we live in a place, we often take it for granted. But it is often when we leave that we do truly feel the saudade. After talking to many Aramcons via interviews and in general interactions, we are bound by this state of saudade. While we might not be always sad, the nostalgia of home brings about the ambivalent nature of our feelings — grateful while we rejoice and a little sad that we can’t relive that moment.

A component of saudade also includes the lack of ability to explain what life in Aramco was like to outsiders, which results in many of us hiding this part of our identity and choosing to focus on another identity when we are asked about our backgrounds. I suspect this leads to a greater negation with a big part of our childhood, which can increase that yearning. Instead, talking about my upbringing in Saudi — in various forms and extents—has helped me connect with those that do care about my past. And I’m thankful for that more than I am put off by those who judge me or misunderstand such a big part of my identity. The warmth of those who care always takes precedence  over the indifference from those who don’t. 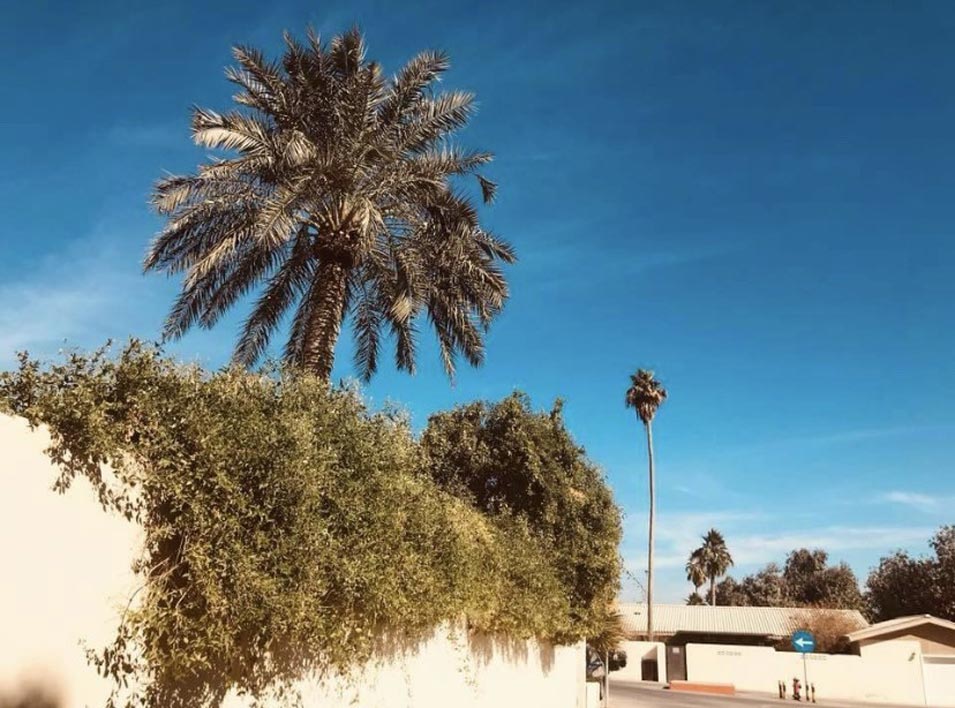 Behind 6th Street in Dhahran.

Another notion of being an Aramcon includes carrying the privilege we held. But here’s the thing that is often unsaid — even though we all lived in Aramco, we carried different sets of privileges, whether it was through a different payroll grade, the specific type of job our parents held, the color of our skin, where we lived prior to Aramco, and so goes the list. But the gaps in our privilege are always balanced by sacrifices.

Human beings are sacrificial in nature: to obtain something new, we invariably let go or leave behind what was, for what will be. This means that every single person that moved to Aramco had a sacrificial load that we know nothing about. For some, that meant taking care of a sick parent from afar, the longing for kids when they went off to college halfway across the world, leaving behind the predictable life you had before in the land of the familiar, leaving behind friends, family, social ties—and all of that. Both privilege and sacrifice are large elements of the Aramcon identity.

The Aramcon identity is not unified by our status because every single person made individual sacrifices and we each held a different privileged status. And these different privileges motivated a different set of choices in our lives, and it affected our mode of being in the community. While it is an uncontested fact that some Aramcons held more privilege than other Aramcons via their financial, passport, or social status, every Aramcon held privilege of some kind—and it is our obligation to carry that well into the world, to make good use of it, to allow that multicultural worldview to be embedded into our workspaces and personal lives.

Shoving aside all the intersectional ways we are different; it was a privilege to grow up in a community that felt safe and sound and was bound together by the diversity and the beautiful idiosyncrasies of the cities that only those who grew up there had access to. 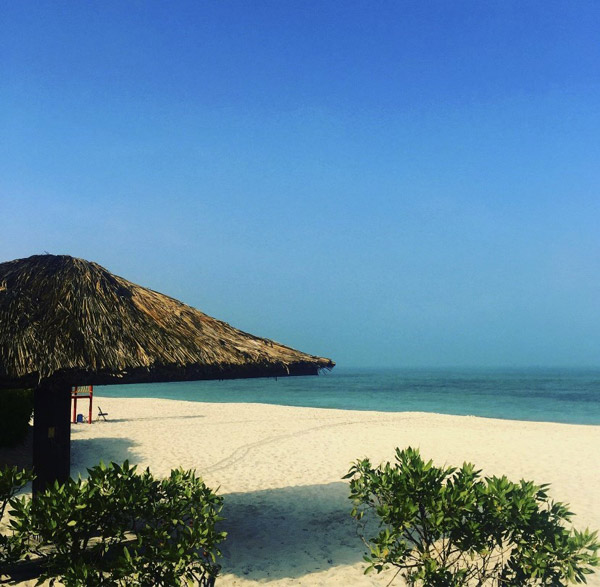 As evidenced by this article, identity is full of nuances, and it is full of intersectionality. It is for this reason, no two people—even if they share a broader identity—will be carbon copies of one another. However, there is still considerable room for a shared story within our sets of identity. While the Aramcon identity diverges based on a variety of factors and is conflated within other identities, there is a special kind of connection that binds us all together.

Questions, rather than definite answers, have always been more exciting to me. It shows us the possibilities of thoughts and answers that haven’t been found yet, that need a little more research and exploration. The creative spirit is revised each time I think about a new way of asking a question. On that note, I want to close this article with a few questions for the reader to think about: 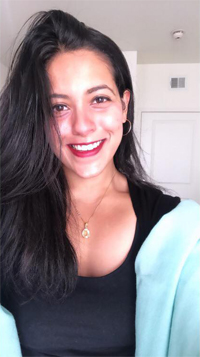