Saudi Arabia to Ireland by Land Rover in 1997: North Along the West Coast of Italy - Part XII

The following morning, after another excellent breakfast, we collect the Land Rover Discovery, pay the parking fee, settle the hotel bill, load our bags and drive down the road at the start of a bright and sunny day. We join the A-1/A-12 and head northwest along a smooth, wide, toll road, with police checks about every three kilometers, which keeps us honest and careful of our speed. We pass the towns of Civitavecchia, Orbetello, Grosseto, Follonico, Cecina and Liverno, and pay two minor tolls. The road is mainly a four-lane, divided highway that bypasses all the towns but there are a couple of stretches of two-lane road. 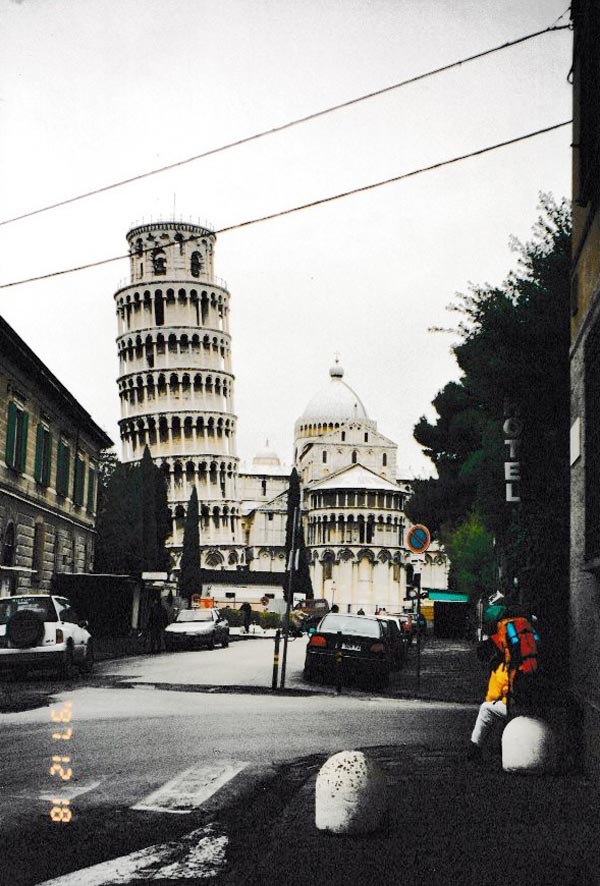 We turn off the highway and enter Pisa on a series of winding streets that snake through the city. Road repairs are in progress, so there are a couple of detours, which adds to the confusion. We are looking for the Leaning Tower and not having much luck. We were expecting this major tourist attraction to be well-marked but can find no indication of where it can be. There are lots of towers around and some are leaning a bit. As time moves on, and Ian’s temper rises with each detour, he tries to sell off the bigger of these leaning towers as the real thing, but Noinin refused to buy that. We asked a couple of locals, with little response, then around a corner and down a narrow street, the real tower appears and it is worth waiting for. We stop in the street, along with many other cars, party blocking the small street, as there does not appear to be a parking area. Maybe we are on the wrong street, or maybe on the wrong side of the tower. We have a look at the tower and the nearby area and take photographs but the tower itself is closed for repairs, so we are unable to go inside.

With the tower visit complete, or partly complete, we drive out of the city and pass strange groups of semi-undressed women, ‘ladies of the night,’ we assume, operating in the open countryside, beside the road, and in broad daylight. Very strange, but from the large number of parked cars, they seem to be doing a reasonable business.

In the early afternoon, we stop at a roadside restaurant for lunch, where we have good, homemade, or so we are told, pasta and red wine, but the atmosphere is lacking and it’s a bit expensive. The day starts to cloud over and rain appears near as we continued north along the coast on AutoRoute A-12, a toll road headed to Viareggio, Sarzana and Rapallo. It’s a fantastic road, sweeping its way over super high bridges across deep valleys and through long tunnels in the mountains. We make fast progress in the heavy rain that gets worse as the day progresses. The traffic become more dense and slower in the heavy rain as we approached Genova along a road hanging between the mountains and the sea. We pass the interchange with the A-7, which goes to Milano, and about 18 km later we turn north on the A-26 toll road to Alessandria. There is snow on the roadside and visibility is poor with mist and sleet, and with the approach of a dark and gloomy night. Looking for a hotel, we turn off the toll road and enter the town of Ovada. We drive around this neat little town, high in the mountains, and find the Hotel Victoria, at the side of the road. It is a nice little place - warm, clean, and cheap - with parking out front at the roadside. We walk around the town in a downpour of sleet, climbing and falling over and through the snow banks on the sidewalks, and get very wet and cold. We check out some leather stores in the town and buy food and drink before returning to the hotel for a picnic of bread, cheese and wine in our room.

Drifts of snow and Alpine mountains.

The following morning, we make an early start and pass through the town of Ivrea, high in the Italian Alps, with the snow clearing. We pass Pont St. Martin, Verres, St. Vincent, and Courmayeur on an expensive toll road. Again, the road is a work of art the way it curves through and around the mountains and bridges the gorges. It would take days to travel this country using normal roads. The scenery is spectacular and beautiful as we pass the town of Entreves and enter the Mont Blanc Tunnel. The tunnel appears to go on forever, and the toll cost matches its length.

We zoom across the Italian border and into France, without stopping or being stopped.