Saudi Arabia to Ireland by Land Rover in 1997: Through France to Switzerland - Part XIII 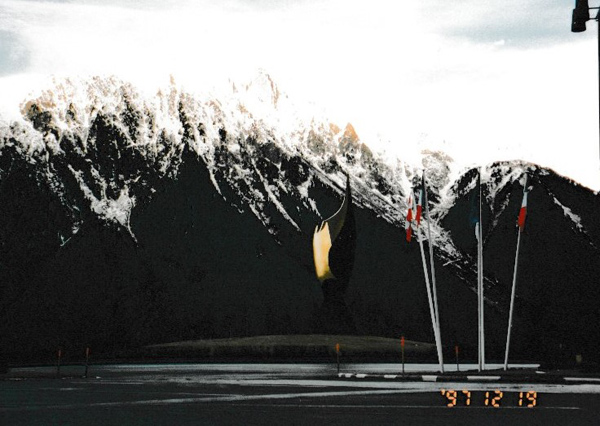 In France, we are now on the E-25/N-205 to Les-Houches. We stop just across the border for lunch at a trucker café serving great, simple food with as much bread as you can eat and as much wine as you can drink included in the base price. Full and slightly drunk, we fill the Disco (Land Rover Discovery) with diesel and take the toll road, A-40/E-25 towards Geneva. In the pouring rain, we pass the deserted French border crossing without slowing down and come to the Swiss border where the police, standing outside in the heavy rain, wave us down. The police asked what passports we have and when we tell them, “Irish and British,” they yell, “OK! Go,” without asking to see the passports. Good system, but I guess the lashing rain helps to speed things up.

Geneva is gloomy and depressing in the pouring rain and mist. We drive around the city checking on the price of hotels. They are all expensive, of course, but we finally take a room, with breakfast, in the Hotel Lido in the center of the city. Not a great place, gray stone, large and old, but OK and in a nice area of the city and close to downtown. As there is no hotel parking, we leave the Discovery in a meter car park behind the hotel and walk around the town in the cold rain. Noinin has a look at the shops but everything is expensive.

After breakfast, we load up and leave Geneva by driving west along the north shore of the lake on H/W1 to Lausanne. Rain is still pouring down as we pass through Nylon, turn left and cross the main N-1, and head straight uphill into the Alps. As we climb up into the mountains, the rain changes to thick snow on our pass through St. Cergue and across the border into France. 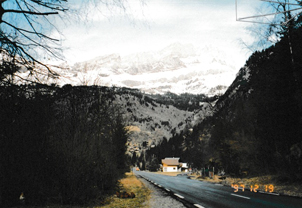 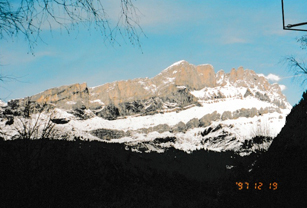 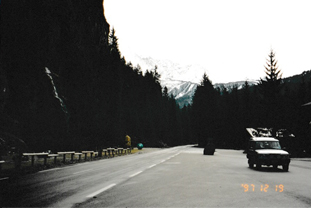 Through the mountains on back roads from Switzerland to France

There are piles of snow on the ground as we pass through the deserted French border post without stopping. The road has been plowed and is clear and open to La Clure where we join the N-5 and turn right, northwest. We stop at a bank in heavy snow and change Swiss Francs into French Francs before passing through les Rousses. As we drop down through the Alps into warmer weather, the snow changes into sleet and then into rain with no snow on the ground.

Just after we pass through the small town of Morez, the two cars in front of us suddenly slam on their brakes and slow right down. Startled, I turn the steering wheel and swing into the oncoming lane to avoid running into the rear of the car in front. There is no oncoming traffic as we pass the two cars and see a dark blue police van stopped on the side of the road. Hence the reason the cars had suddenly slammed on their brakes. Three young, uniformed officers standing beside the van wave us into the side of the road and a female supervisor appears, screaming at the top of her voice, “papers, papers, papers, now!” We pull over and park in front of the police van and ask her in our limited French what the problem is.

She continues to yell at us as we try to explain that we are having difficulty understanding her. She is not a happy trooper and is not at all impressed by our lack of French. She demands to see a driver’s license but rejects as “unacceptable and not allowed” my Saudi driving license before reluctantly accepting my Canadian, Ontario, license. Maybe she liked the French wording on the bilingual Ontario license better than the Arabic. Her temper and unhappiness increase as she tries to intimidate me and impress her young male companions. After asking why I did not speak French better, she demanded the car papers. Seeing that all is lost, I apologize for my poor French and ask her how good her Arabic and English are. She does not understand the question until I hand over the car papers, all written in Arabic, of course, with some English translations. She goes nuts, and the young policemen laugh, which really pisses her off. Then she spends the next thirty minutes writing a report with our unhelpful assistance translating Arabic and English into French. She imposes a fine for crossing the white line in the center of the road and demanded FF 600, cash! I express my surprise at her rudeness and state that in my country a visitor would be treated with politeness and respect and certainly not fined. She is not impressed and demands we pay the fine, "Now, at once!” We go through the motions of not having enough French money, but suddenly find the required amount when she says we cannot proceed until the fine is paid and she starts to arrange an escort to the ATM at the local bank. The money is reluctantly paid to her and a receipt is received in return before we get on our way again. Welcome to France.

In An-Granovaux, we turn left onto the N-78 to Louhars and continue along the D-978 to Chalons, where we try to find a bank but the town is busy and there are no parking spaces. Back on the road, we take the A6 toll road all the way to Paris, as tolls are cheaper than fines. At Fontainebleau, on the outskirts of Paris, the toll road ends with a payment at a toll booth. We fill up with fuel and continue on the A6 motorway past a Coca-Cola factory and a Renault plant before taking the turn-off for Savienly.

In Savienly, which is a Paris suburb, we hunt around and ask for directions. We are looking for Noinin’s brother, John’s, house, which we find without too much difficulty. After a snack, we walk around the town and find an ATM and get money out to replace the money we gave the police. We buy fourteen bottles of wine to take to Ireland for Christmas. We attend church with John and have dinner with him and some of his friends. French police and their fines are discussed in great detail during the meal. It appears we got off lightly.

The next morning, we are back in our Land Rover and make our way back to the A-6 and drive toward Paris. We reach the BB, the Paris ring road, and drive east around Paris in light, early Sunday morning traffic. We leave the BB and follow the signs for the Charles De Gaulle airport and join the A1/E15 toll road to Senlis, Roye and Arrar. The morning turns sunny as we join the A1/E15 toll road for Calais.

Before entering Calais, we turn off the main road, following signs for the channel tunnel, and join a long line of vehicles waiting to pass through the tunnel toll booth. After about twenty minutes, we reach the booth and as we already have our tickets, we pass straight through to the Duty-Free store. There we join another line to drive the Disco onto the train. As the Disco exceeds the normal, car maximum-height limit of 1.8 meters, we have to go on the single-deck train for high vehicles. At 13:46, the train pulls away from the Calais terminal and at 14:20 it is in Folkstone, England. There, a technical problem develops with the train’s front doors and they cannot be opened. After failing to correct the problem, it is decided that all the vehicles on the train have to reverse all the way down the train and exit by the rear doors. Great start to UK driving.