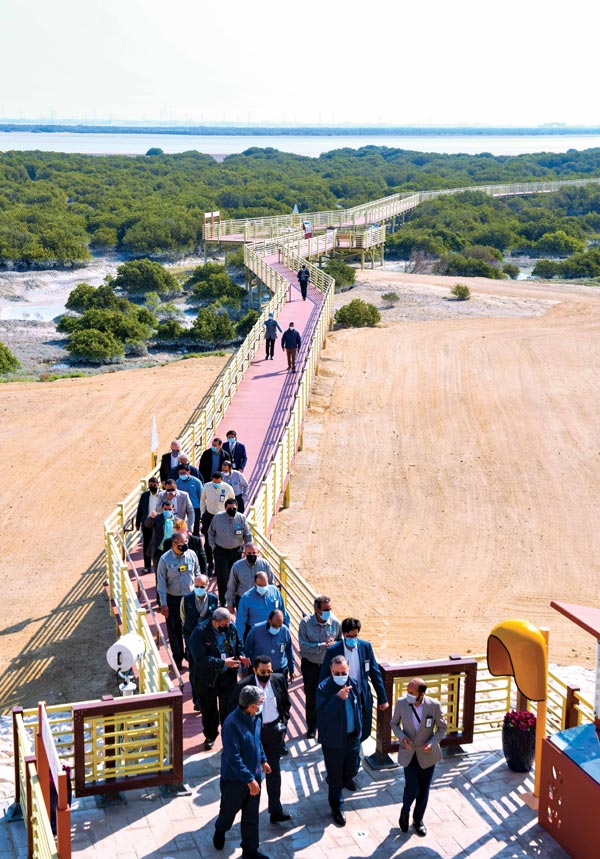 Aramco president and CEO Amin Nasser took part in a ceremony to open the Mangrove Eco-Park near Ras Tanura on Jan. 11. The Eco-Park is the first facility in the Kingdom dedicated to the preservation of mangrove forests, which provide critical buffer zones between land and sea as well as breeding and nursery grounds for various marine life.

The opening of the Eco-Park took place during a gathering of executives in Ras Tanura (RT) to review safety measures at RT area company facilities.

“Mangroves play an important role in our environment as a line of protection and as a nursery for marine life,” said Nasser. “This Mangrove Eco-Park will most certainly enhance our longstanding commitment to sustainability and to protecting and enhancing the environment around us."

Started in 2012, the 63-km2 Mangrove Eco-Park protects one of the last naturally occurring mangrove forests in the Eastern Province and features the longest mangrove boardwalk in the Kingdom. Protecting sensitive natural habitats in the areas where we operate not only demonstrates Aramco’s commitment to environmental stewardship, it also provides an opportunity to increase public awareness about the important role that mangrove forests play in the Kingdom’s environment.

Mangrove forests are not only beautiful places to visit. They play a crucial role in protecting shorelines from erosion. They also provide sanctuaries where fish, shrimp, and other marine life can spawn and produce offspring, which strengthens the local ecosystem. With healthy fish populations, local communities that rely on fishing are able to enjoy more stable incomes, providing seafood to foreign and domestic customers.

Amin Nasser was on hand Monday for a ceremony marking the opening of the Mangrove Eco-Park near Ras Tanura, the first facility in the Kingdom dedicated to the preservation of mangrove forests.

Begun eight years ago, the park protects one of the last naturally occuring mangrove forests in the Eastern Province and features a long boardwalk to provide visitors an opportunity to see conservation in action.

But mangrove forests aren’t just beautiful places to visit. They play a crucial role in protecting our shores from erosion while providing sanctuaries where fish, shrimp, and other marine life can spawn and produce offspring, strengthening the ecosystem.

The park’s opening was attended not only by Nasser, but also other members of senior management as part of their monthly Executive Management Safety Review.

The Mangrove Eco-Park is visited by over 100 species of birds annually, such as the whimbrel and curlew birds that migrate from as far as Siberia in Russia.

Scientific research shows that mangroves even play a role in purifying seawater by absorbing pollutants and mitigating climate change by capturing and storing atmospheric carbon within the surrounding sediment. In line with the transition to a circular carbon economy, mangroves provide a sustainable carbon sequestration solution because they capture five times more carbon dioxide than terrestrial trees and do not require ongoing maintenance once established.

The Mangrove Eco-Park has been designed to educate the community — from schoolchildren to families and visiting tourists — about man-groves and their environmental and economic benefits. Each element of the facility contributes to the mission of environmental preservation and local awareness. An on-site field lab is fully equipped with all the tools necessary to study the mangrove forest and coastal biodiversity. A boardwalk has been built to allow visitors to stroll into the estuary and to view the forest and the local wildlife up close. An adjacent mangrove nursery provides space for seedlings to be nurtured to expand the size of the mangrove forest, keeping the mangrove forest at RT alive and well for generations to come.

“We are delighted with this new and exciting recreational and educational facility for RT residents and visitors,” said Community Services executive director Faisal A. Hajji. “It will complement Community Services’ efforts toward improving the quality of life, and more importantly, further strengthen the company’s carbon sequestration contribution.

Environmental Protection general manager Omar S. Abdulhamid said, “Aramco, a pioneer in environmental stewardship and biodiversity, is proud to establish the first Mangrove Eco-Park in the Kingdom. This is yet another step in its journey toward a sustainable future.”