Memory Lane: Looking Back at Records, Arabic Classes, and Feel the Burn 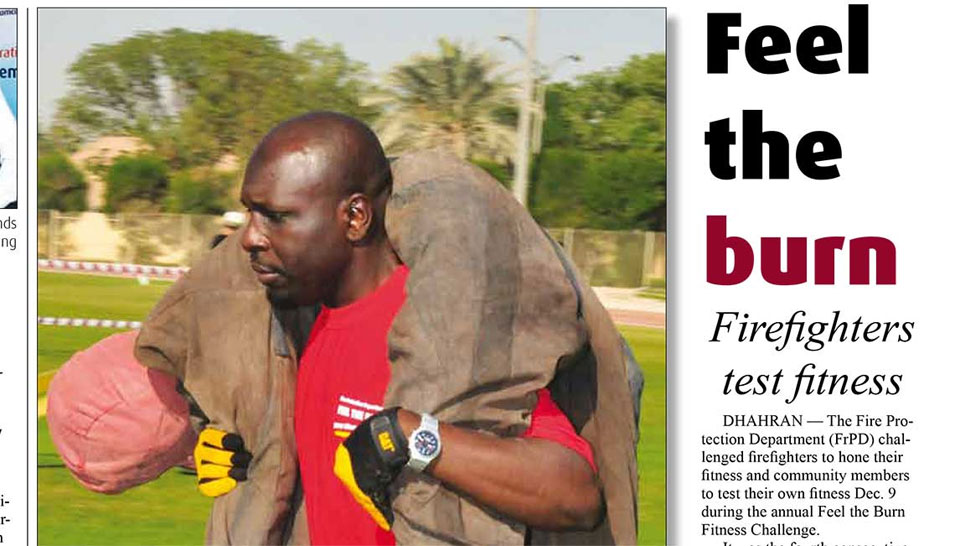 Arabic classes for the new year, celebrating production records and drilling competition champions, a hiatus in the weekly publications, as well as the Feel the Burn event are highlighted in this week’s trip down Memory Lane.

Arabic classes on Saturdays, Sundays, and Mondays in Dhahran. Wives class in elementary colloquial Arabic will be 9:30 to 10:30 a.m. at House No. 1222 (Mrs. Burleigh). New class in elementary colloquial Arabic at the Jebel School (office area) will be 7:30 to 8:30 p.m. And intermediate colloquial Arabic open to those who have completed the elementary class will be at the Jebel School from 8:30 to 9:30 p.m. The text will be the Arabic Work Vocabular for Americans in Saudi Arabia, which will be distributed to class members without cost. it will be available for purchase by others (at 1 Rupee) in the Canteen beginning Wednesday, Jan. 2, 1946.

The top Aramco story of 1960 is the record rate of crude oil production achieved by the company during the year. The past year has seen Aramco pass the 4 billion barrel mark in total production and consistently break individual production and oil handling records throughout the year. Aramco produced the 4 billionth barrel of oil from Saudi Arabia on June 13. The daily average production record of 1,326, 121 barrels per day was established in October.

Reading and Bates' drilling rig, the L.M. Clark, finished last month's drilling more than a week ahead of schedule to gain the rig of the month award for November's Drilling Game competition. During the month, the Clark completed four Safaniyah oil wells drilling more than three miles of hole below the sea floor. The Aramco drilling foremen on the Clark are D.W. Ives and L.W. Littlefield. The outstanding Support Service Organization Award was presented to the Aramco Aviation Department for their work in providing air transport services for both the onshore and offshore drilling programs.

Because of the two consecutive short workweeks, there will be no Arabian Sun on Dec.26 and Jan. 2. The movie and Channel 3 TV schedules will be distributed in mail boxes in all areas. Deadlines for the Jan. 9 issue for all items except sports is 11:30 a.m. Saturday, Jan. 5, and for sports items is Sunday, Jan. 6.

The Fire Protection Department challenged firefighters to hone their fitness and community members to test their own fitness Dec. 9 during the fourth annual Feel the Burn Fitness Challenge. The one-day event is designed to increase community awareness of firefighting and to encourage healthy competition among firefighters as part of the ongoing FrPD Physical Fitness Program, introduced in 2006. Omar A. Fallatah of the Dhahran/Riyadh Division won the fitness challenge. Meanwhile, almost 400 community members competed in the race, a 3-kilometer Road Race, with Abdullah Al-Joud finishing first in 8:15.