“And We have created you in pairs” 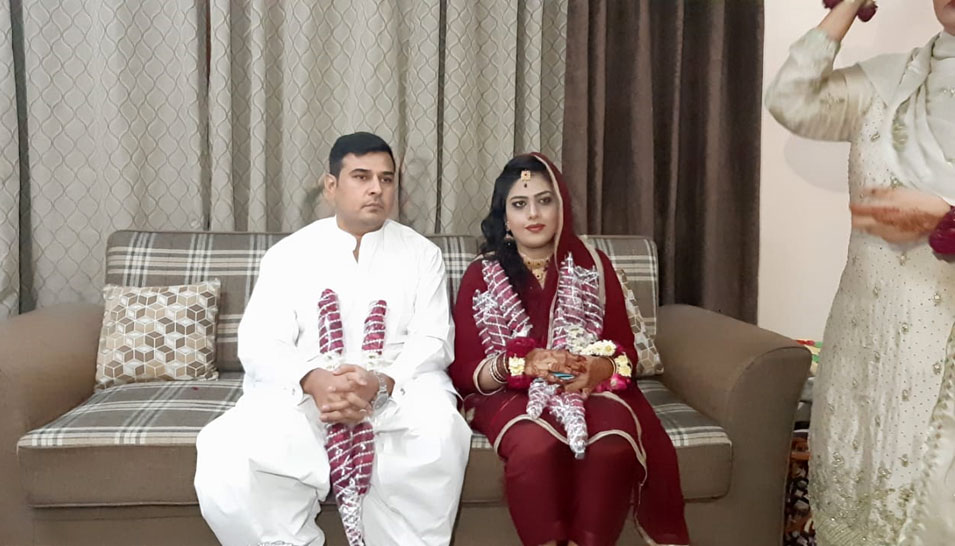 Kamran and Bushra at their Engagement Ceremony

Bushra Irshad, the niece of Engr. Iqbal Ahmed Khan married Kamran Ahmed Khan, the brother of the son-in-law of IAK on the 26th of March 2021.

In Pakistani culture, a few pre-celebrations take place before the actual wedding ceremony. The festivities started with the Engagement Ceremony held at the bridegroom’s place on 15th November 2020. This was a small family gathering where Bushra and Kamran were officially engaged. Dinner was enjoyed and everyone was content.

The next rasam was the “Lal Khat”, which is the event where the date of the wedding is fixed. A red letter is read out and the official Nikaah date which has been decided by both families is written on it. This was also a small gathering with a delicious dinner on the 27th of February. The Lal Khat was read out by Dr. Kiran Ata Ur Rehman. 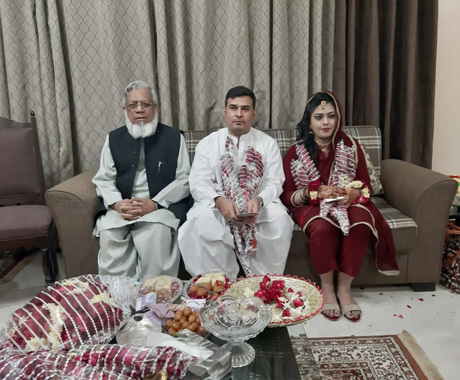 Engr. Iqbal Ahmed Khan with Kamran and Bushra at the Engagement Ceremony 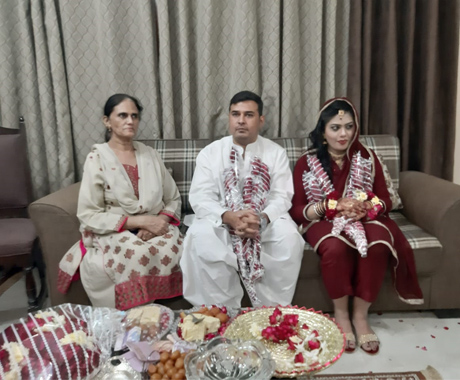 As I was from both the groom’s and the bride’s side, my Khala being the bride and my Chachu the groom. I had the privilege to attend events from both sides. A Quran Khaani was held at my Chachu’s place on the 19th of March to thank ALLAH (SWT) for the blessings and seek His Guidance in the work we’re about to do. We all read Surah Yaseen from the Holy Quran and chit-chatted. It was a fun and lively event.

On the 21st, two of the bride’s sisters-in-law came to the groom’s house with the ‘pehnauni’, exchange of clothes as a symbol of gifts and welcoming them.

On 23rd March, the Mayoon was held. There was music and dancing involved creating a lively atmosphere and getting everyone in the mood for the forthcoming wedding. Everybody was wearing shades of green and yellow as a sign of tradition. The jewelry of the bride was made from yellow flowers and looked extremely intricate. The event was further lit up by the bride’s phuphos; Saba, Hina and Naz, who, with their amazing and enthusiastic dholak skills, put on a fantastic show, energizing everyone! Ubtan was put on the bride as a form of ritual. 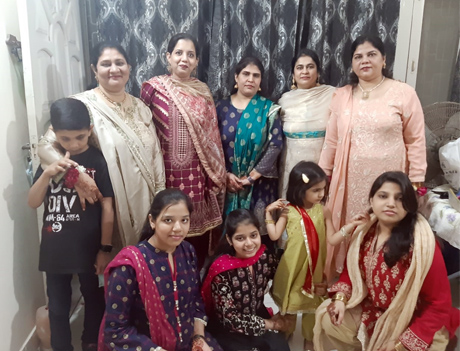 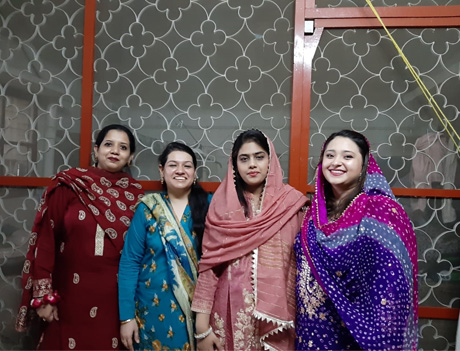 Erum, Faryal, Bushra and Samia at the Lal Khat Ceremony

The next day, a dholki was held at my Chachu’s place where more dancing and music followed and we put haldi and ubtan on his face, we had an ubtan fight too, we all had a lot of fun! We put on henna, intricate designs on our hands and feet, it looked very pretty! On the bride’s side, she and others were getting mehndi on too.

The 25th of March was the Nikaah Ceremony. In Islam, the main event and most formal ritual is the Nikaah in which the bride and groom exchange vows and sign on the Nikaahnama (Marriage Certificate). After the Nikaah, the couple is allowed to see each other and mehr, a symbolic presentation of money or gifts is given to the bride by the groom. Kamran’s Nikaah got done in Tayabba Masjid whereas Bushra’s Nikaah was done at home. Engr. Iqbal Ahmed Khan was her Wakeel followed by two witnesses. It was a very emotional event, tears were shed. Everyone hugged each other and wished the couple a happy, prosperous life together. Alhamdullilah. 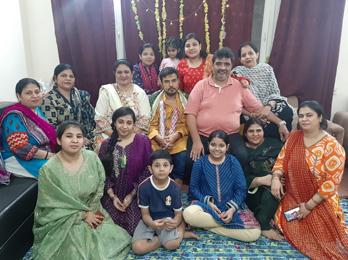 The Groom’s family with Kamran on his Mayoon Ceremony

Finally, the awaited day had arrived. The Wedding Ceremony, held at Adamjee Banquet. Bushra was looking absolutely stunning in the red traditional dress and elegant jewelry. Kamran was dressed in a Shrewani and Kulla. Everyone looked breathtaking and gorgeous. The banquet was quite large and we were welcoming the guests.

The Baraat arrived at 7:00 after Maghreb prayers where all the groom’s siblings were beside him during the welcoming. After a while, the bride was brought to the stage through the aisle by her family and onto the stage, beside her husband.

A rasam called Arsi Musaf took place on the request of Bushra’s sister-in-law, Samia. A mirror was kept in front of the couple, the main purpose being for them to see each other in it for the first time. The Sehra was lifted from the bridegroom’s head and they both saw each other for the first time after Nikaah. 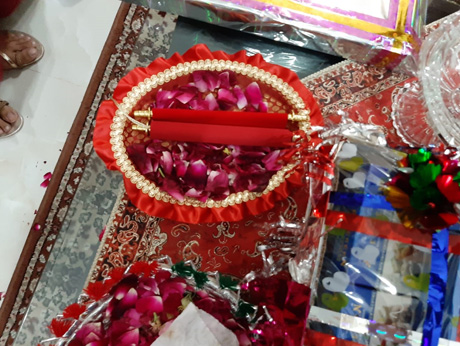 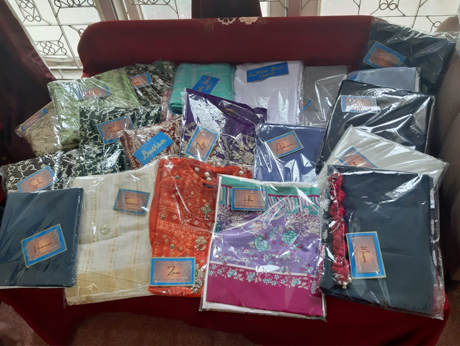 Following SOPs due to the pandemic, dinner was served early at 8:30. Delicious white biryani was served with seekh kabab, karhai and chicken cheese rolls. Dinner was absolutely mouth-watering. For dessert, we had fruit Alaska and gulab jamun.

After multiple photography sessions, the event came to an end with the rukhsati. Saat (7) Sehra Bandi took place where the sehra was put on by 7 married women, and at last on the bride at the time of rukhsati. The Holy Quraa’n was held above her head by her brother and she was escorted to the car by her family and in-laws. The car was decorated with beautiful flowers as a sign of welcoming a new family member to the family. 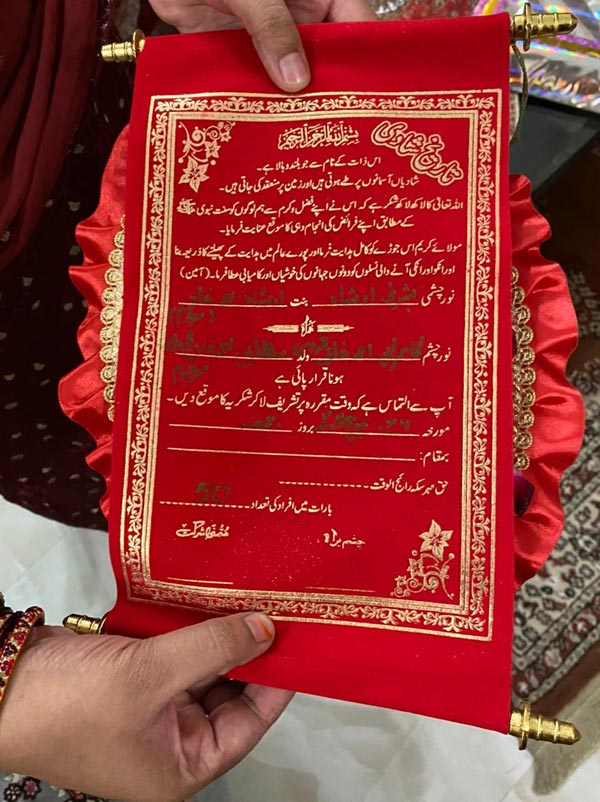 An open picture of Lal Khat

Upon reaching home, all the bride’s siblings gave the new couple money in the form of “salaami” and the rasam called Darwaza Rukaai was held. This took place in front of the couple’s bedroom, the groom’s sisters would not allow the groom to pass through the door unless he gave them money. After 20 minutes of humorous arguing, Kamran finally gave in the money and was allowed to go inside. And like that, the wedding ceremony came to an end, ALHAMDULLILAH.

The day after, on 28th March was the Valima Reception which was held at Baithak Banquet by the groom’s family. Bushra wore a beautiful sharara in the colour contrast of blue and grey whereas Kamran wore a black suit with a grey necktie. The event went amazingly, with intriguing music playing throughout. At dinner, there was chicken tikka, biryani, qourma and doodh dulari. Everyone was dressed fabulously. With the Valima Reception, the wedding festivities came to an end.

At last, I want to congratulate my Chachu and Khala. May you live a long, healthy and happy life together. Aameen.