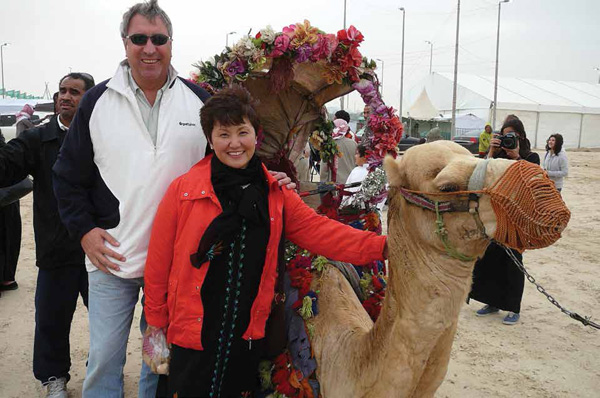 Jim Schultz and his wife, Yuko, are leaving the Kingdom this month after more than a decade, where he worked as a Human Resources manager in the Corporate Venturing Department.

James (Jim) J. Schultz, HR manager with the Corporate Venturing Department, retires from the company at the end of April.

Born in Oakland, California, Schultz has spent almost 11 years with Aramco, joining the company in the fall of 2010 as a senior HR analyst.

As an HR professional with a B.A. degree in Economics from the University of California, Berkeley, and an MBA from Saint Mary’s College of California, Schultz said the most rewarding aspect of his career with Aramco has been his exposure to cultural diversity and discovering a common global humanity from living and working abroad.

“We may have differences culturally, but we all share similar values of love of family, homeland, traditions, and wanting a better future for our children. Our similarities far outweigh our differences,” Schultz said.

Recalling his journey to employment with Aramco, Schultz explained, “I was 22 and fresh out of college. My opportunity to join the international oil industry came about when a senior HR analyst at Chevron Overseas Petroleum transferred to Aramco, and I was hired to replace him.

“Back then, the four major U.S. oil companies loaned expatriate talent to our company. The relationship with Aramco was very important, and we were advised to support any request received,” Schultz said.

In fact, Schulz said, he got his start preparing expatriate assignment letters and compensation worksheets while administering employees transferring to the Middle East.

“Little could I have imagined that I’d spend a significant part of my later career there, too,” he said, adding that it was a young Saudi manager in the U.S. for training that he met and got him interested in Aramco.

“My only regret is that I didn’t join Aramco sooner,” Schultz said. “In spite of being here 10 years, I’m always meeting new people who have been here as long as or longer than we have.

“I joined a new business line last year, and I am learning new things, proving that even after a 40-year career, an old dog can learn new tricks.”

The pandemic has curtailed plans to tour Europe upon leaving the Kingdom, so Schultz and wife Yuko postponed their holiday and will return directly to their home in The Woodlands, Texas.

Future plans focus on travel to areas in the U.S. that the keen golfing couple haven’t seen before, cruises to new and remote destinations, learning to ski again, and visiting friends all over the world.

“We look forward to spending extended time in Japan, where my wife’s family lives, and exploring the back roads of that beautiful and exotic Far Eastern land,” Schultz said.

“Our life in Dhahran represents the longest time we’ve been in any single location in our entire married life. This company and community are very special to us. We leave with great memories and heartfelt gratitude for the privilege of living and working here.”