Al-Balad – the Jewel of Jeddah

I have twice had the pleasure of visiting Jeddah, on the west coast of Saudi Arabia. The first was a scuba diving trip with two work mates in 2007, and, again nine years later, with my wife, Ann, shortly before retiring from Aramco in 2016.

Since its founding in the 7th century during the early Islamic Caliphates, Jeddah has played host to millions of pilgrims who travel across the Indian Ocean, and up the Red Sea, on the way to the Holy City of Mecca. Hajj pilgrims, mainly from North Africa and South and Central Asia, made their way into Old Jeddah via the city’s bustling port. Just 75 kilometers (47 miles) from Mecca, Al-Balad was the center of Jeddah, a meeting point for Muslims from around the world. It was soon nicknamed the Gate to Mecca. [1]

Jeddah flourished after the Suez Canal was opened in 1869, linking Europe with India and Asia. This brought wealth to many merchants who constructed buildings several stories high made of white coral limestone with elaborate hand-carved wooden shutters and balconies that were painted bright green, blue, or natural brown. These sheltered balconies and windows, known as rawasheen, with mashrabiya (carved wood latticework) elements, were constructed in a way that would catch every passing breeze. And yet, not only did they offer full privacy, but they were also large enough for residents to sit and look out onto the street below. 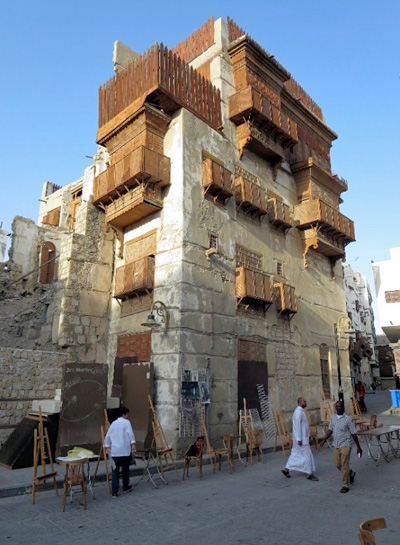 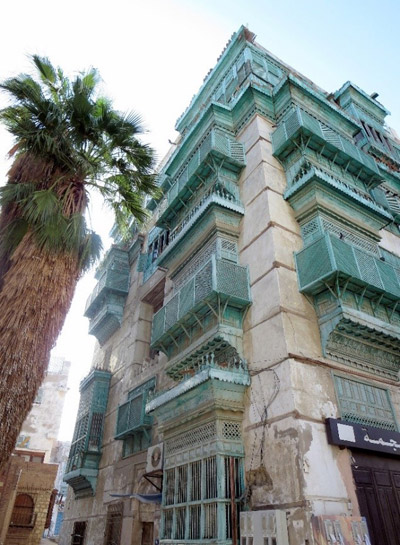 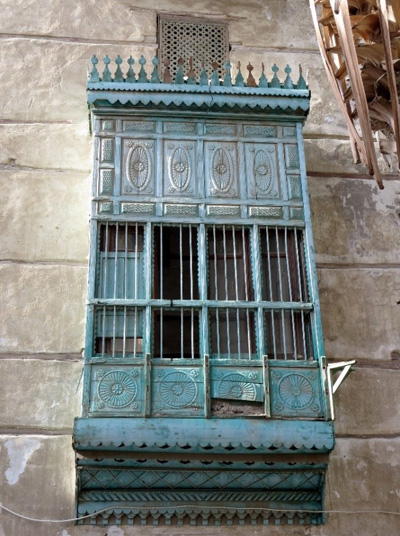 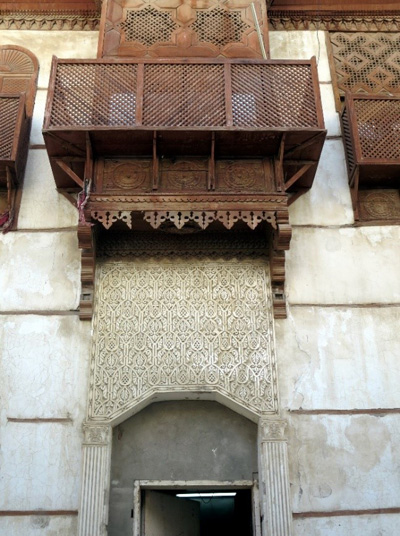 In the 1970s and 1980s, as Jeddah grew wealthier due to the oil boom, many Jeddawis moved away from Al-Balad to the burgeoning northern part of Jeddah. Al-Balad felt increasingly cramped and antiquated. There was insufficient parking for large cars. Its stores did not sell modern goods. Soon low-wage immigrants seeking affordable accommodation replaced the former Saudi residents.

The municipality of Jeddah began historical conservation efforts in the 1970s. In 1991, the Municipality of Jeddah founded the Jeddah Historical Preservation Society to protect the historical architecture and culture of Al-Balad . Al-Balad was nominated by the Saudi Commission for Tourism and Antiquities to be added to UNESCO's World Heritage list, and it was accepted in 2014. [1]

Mr. Sami Nawar leads the project to restore buildings in Al-Balad. “Al-Balad is a unique place,” he says, describing his home neighborhood. “This architecture cannot be found anywhere else. There are traditional high-rises in Shibam and Sanaa in Yemen also, but they are made from clay.” Al-Balad houses are built from coral limestone brought directly from the Red Sea, as there are no stone quarries in Jeddah’s surroundings. “In the past, we built with blocks and sand from the lagoon. We used coral and sometimes the more fragile sediment as well.” [3] 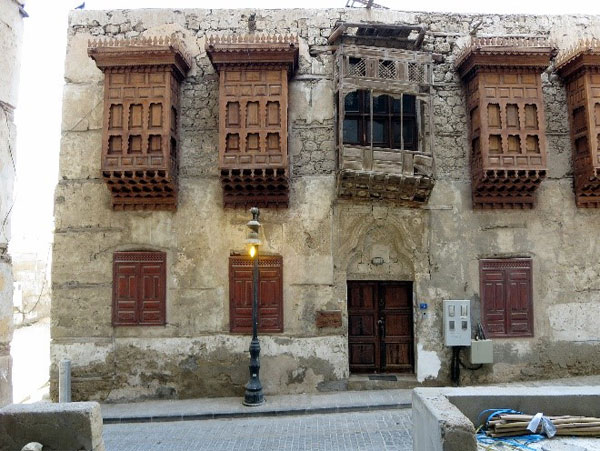 In 2007, I returned to the Middle East after a 25-year lapse to start a new job in Jubail, Saudi Arabia. One weekend, I decided to visit Jeddah and experience scuba diving in the Red Sea with two friends from the office. Meanwhile, my wife was finally due to arrive in Jubail the following week. Advised of the cultural fashion norms for women in the Kingdom, she asked me to bring an abaya for her when I picked her up at the Dammam airport. Jeddah was known for its abaya markets, so this was the perfect opportunity to purchase one for her.

Our scuba diving done, we taxied to the old part of town for dinner. Later, we chanced upon the plaza at the Bab Al-Jadid (New Gate) and ordered a hookah pipe. We sat in well-worn plastic chairs and relaxed in the tranquil space. This was Al-Balad. 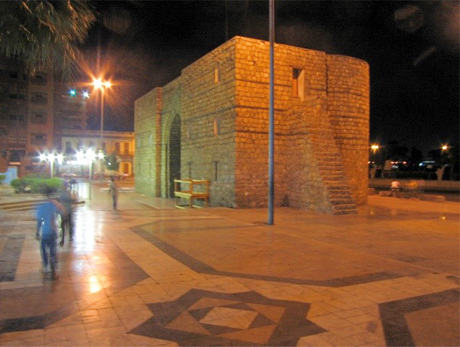 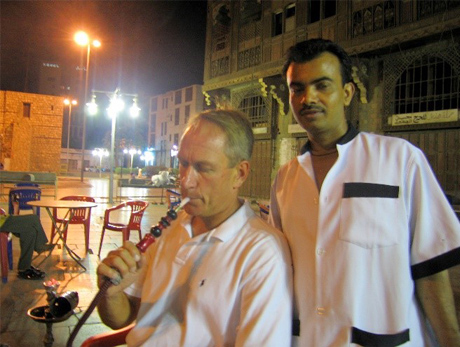 Smoking a hookah pipe in the plaza.

From Bab Al-Jadid we wandered through Al-Balad to the clothing souq and peeked in a few abaya shops. I gradually realized that abayas range widely in quality, style, and price. On closer inspection, I realized some were plain black, while others were decorated with embroidery. Who knew? I was confused and out of my comfort zone. How was I to make such an important decision? I decided that Ann could shop for her own abaya when she got settled in. I just needed to buy her a “temporary” abaya for her first days in the Kingdom.

Since she is not as tall as I am, in fact, more than a foot shorter, I had a brilliant, cost-saving idea to go to a children’s clothing shop. Sure enough, a somber shopkeeper showed me girls’ abayas that were shockingly reasonable, SR18 each (US $5). In my mind, this was a win-win situation. I purchased two -- one with convenient snaps up the front and the other, slightly heavier, that had to be put on over one’s head. The prices, and styles, were a far cry from the elegant, upscale abaya shops in the trendier parts of Jeddah, but these would suffice for the time being. As it turned out, Ann was satisfied with the two abayas I had selected, and though she looked for substitutes in the ensuing years, she was never bothered enough to replace them in the nine years we lived in Saudi. The abayas now hang in her closet in California, and she wore them again when we returned to Saudi for our first annuitants reunion visit in 2019. 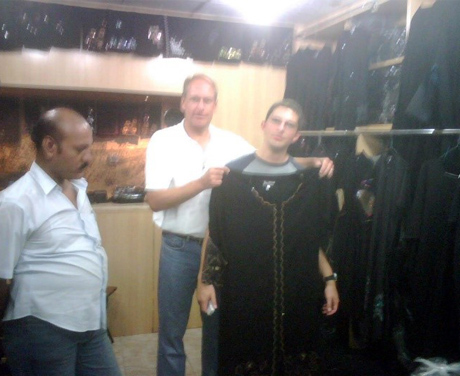 In the children’s clothing shop, Michael reluctantly agrees to “model” an abaya. 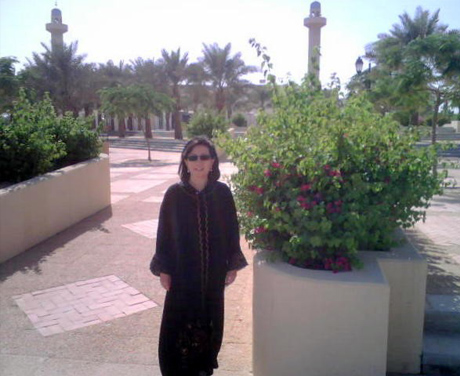 Later, having safely arrived in Jubail, Ann wears her new abaya from Jeddah on her first outing in the Kingdom, 2007.

Before my wife and I departed Saudi Arabia permanently in 2016, we decided to visit Jeddah and legendary Al-Balad. During a three-day visit, we felt we had stepped back in time as we wandered for hours through the narrow streets and meandering pathways of Al-Balad. I pointed out the area where I had purchased the two abayas Ann had been wearing for the past nine years. I wish we had been able to hire a tour guide and had spent more time in Al-Balad. I understand that guides are available these days, thanks in part to Saudi’s ambitious new “Visit Saudi” campaign, which was introduced in 2019-2020 to encourage tourism in the Kingdom. [2]

A delightful and unforgettable place, quite unique to Saudi Arabia, indeed, Al-Balad is the jewel of Jeddah.

Following are highlights of our wanderings through Al-Balad.

The public square near Al Muassasah Street and the Naghi Mosque teem with street vendors, residents, and tourists as the Maghrib prayer is called. 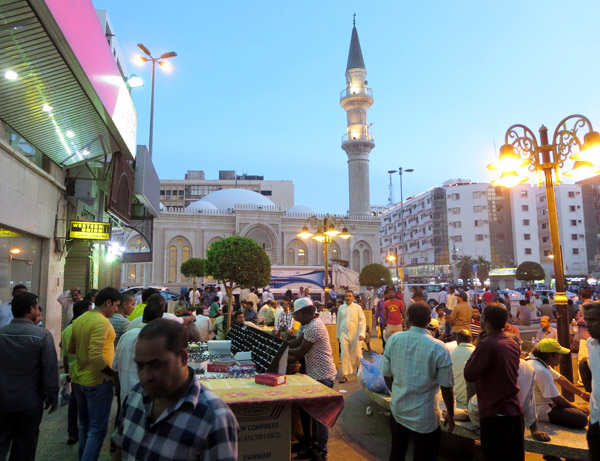 Once the only way for pilgrims to reach Mecca, Al Dahab Street retains a real sense of Arabia’s past. The night markets bustle with street vendors, carts loaded with trinkets and brightly colored stores selling nuts, spices, abayas, shoes, fabrics, clothes and more. [5] 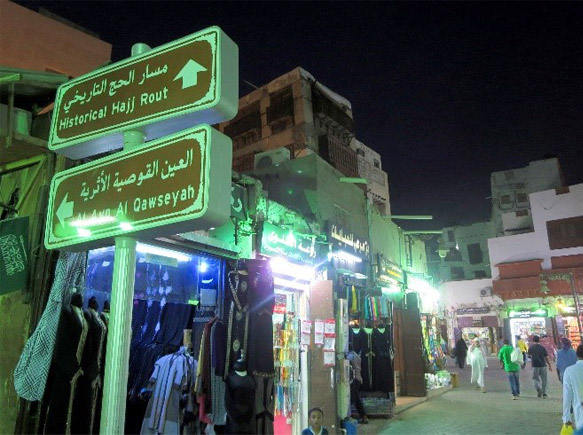 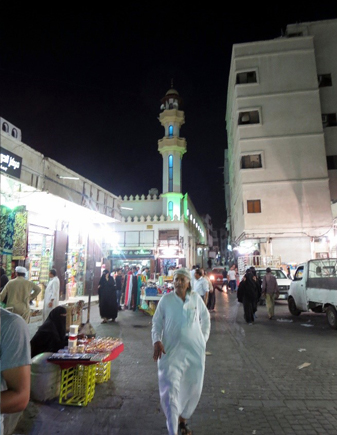 The proudest and most carefully restored of all buildings in Al-Balad is the Naseef House. Now entirely renovated, it was built at the end of the 1800s, first to house the wealthy merchant Naseef family and then to receive important visitors to Jeddah – not least after 1925, when King Abdulaziz Ibn Saud used it as a royal residence. Inside, the ceilings are high and reception rooms luxurious, and the middle of the house has a wide wooden staircase that runs all the way to the top floor.

Four stories tall, Naseef House was the tallest building in Jeddah until the 1970s. It also boasted the city’s only tree outside its entrance, and letters sent to the Naseef family would be addressed “the house by the tree.” Today, the house serves both as a cultural space and monument to Al-Balad ’s prominence throughout history–and a reminder of the potential of architectural restoration. [3] 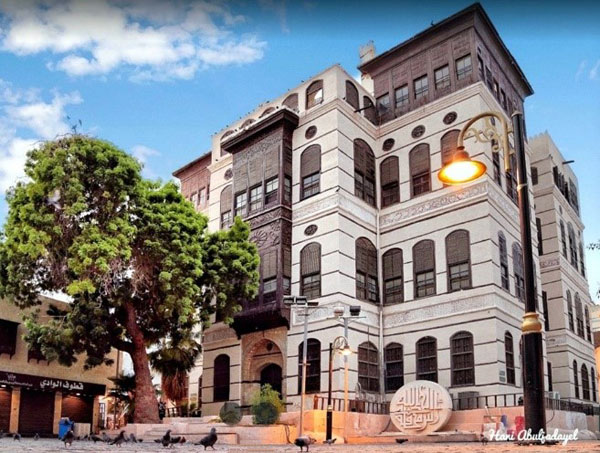 Masjid al Shafi’i, or the Shafi’i Mosque, dates back to the time of third Caliph of Islam and is the oldest mosque in Jeddah. It is built in the traditional Fatmid style (from the period 970–1171 CE), designed with intricate Islamic calligraphy on the walls and bright colors and patterns that make it stand out from most mosques in the city. The impressive minaret dates back some 800 years and is considered the oldest in the area. [4] 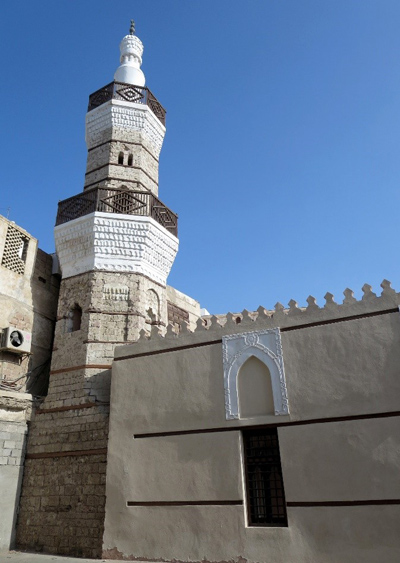 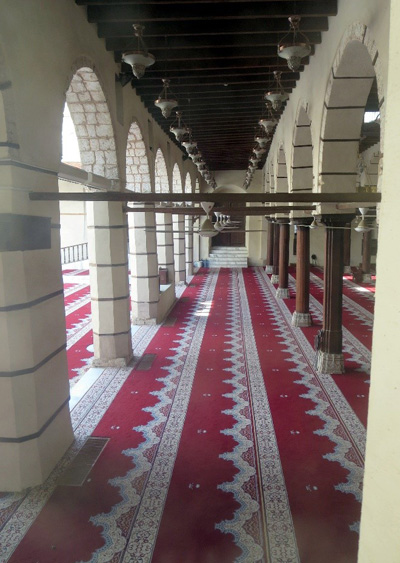 The mosque and minaret have been restored to their former glory.

An important example of a traditional Hijazi merchant’s home, the Saloum House has now been tastefully converted into a museum. Family portraits and ornate furnishings are on display. 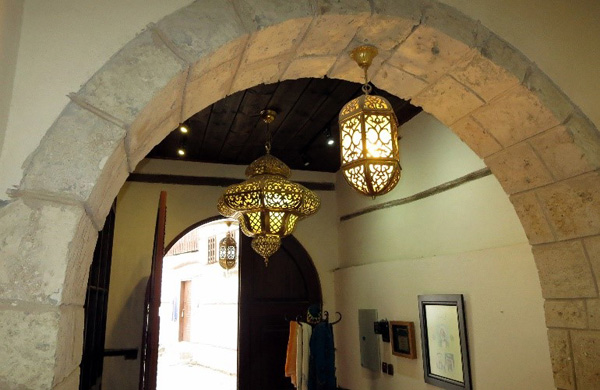 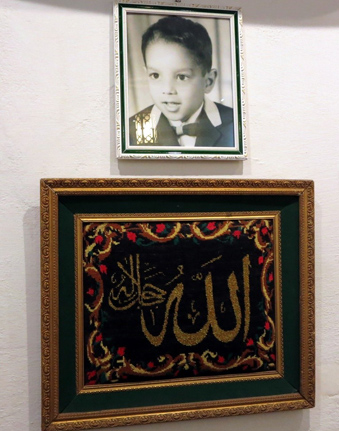 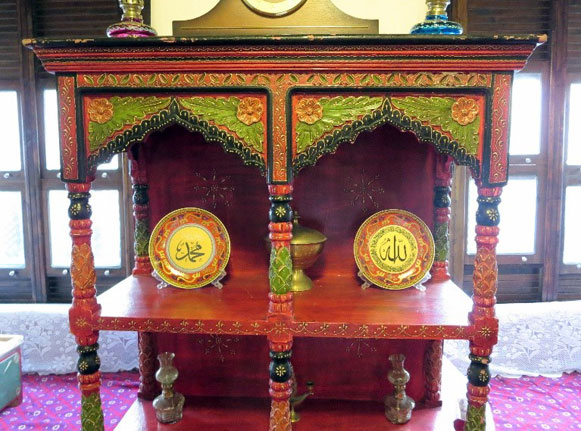 Just inside an unnamed gate on the north edge of Al-Balad is a recreation park of sorts. Locals come out in the late afternoon to play table tennis, billiards, and foosball under a canopy of shade trees. Older gentlemen relax on their couches and share the news of the day. 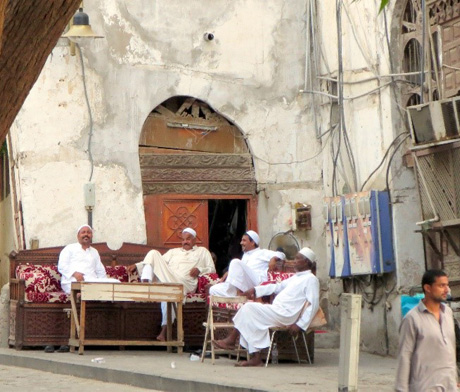 Gentlemen relax at the outdoor majlis. 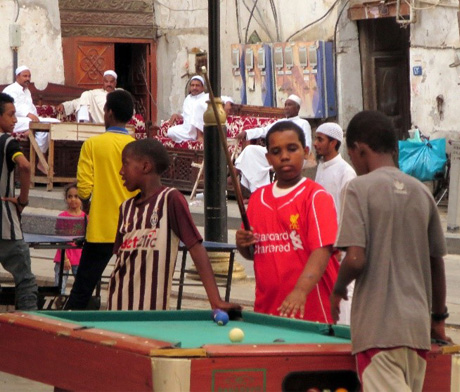 Reflecting an increasing demand for touristic keepsakes, a newly established gift shop has appeared not far from the outdoor majlis. In addition to a wide selection of figurines reflecting traditional Hijazi costumes and culture, the establishment offers scale models of notable Al-Balad houses and mosques, paintings by local artists, jewelry, tea towels, fabrics, and postcards. There is even a multilingual signboard outside to attract customers. 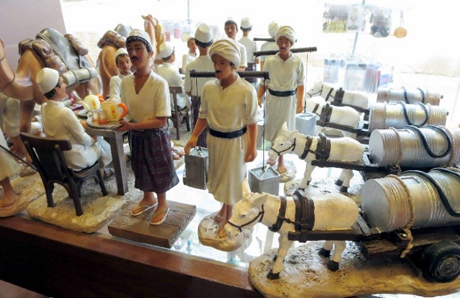 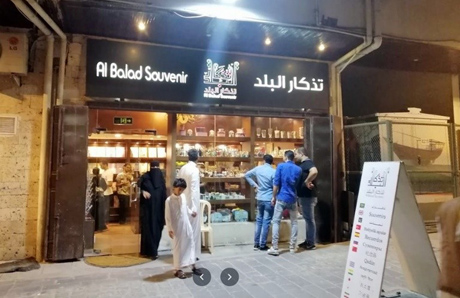 The Al-Balad Souvenir shop as seen in 2019. (Photo courtesy of Adel Al-Turi Al-Juhani)

Getting lost in Al Balad’s labyrinth of streets and alleys is part of the experience. Random scenes around every corner are inspiring. 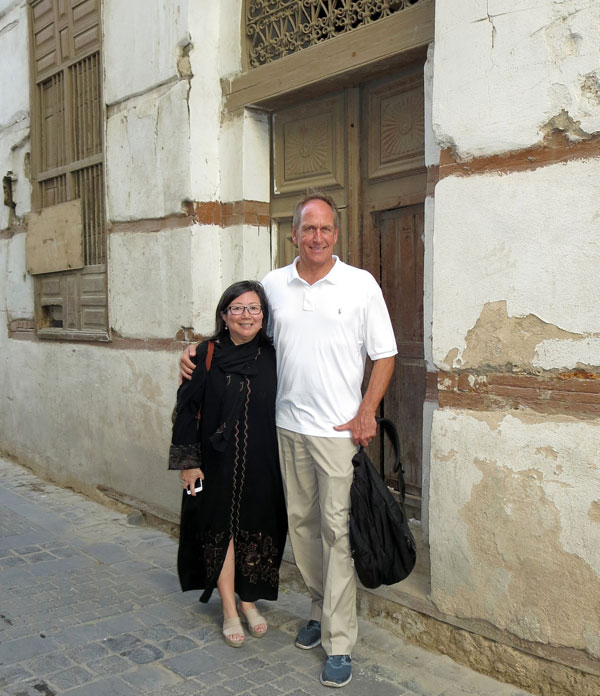