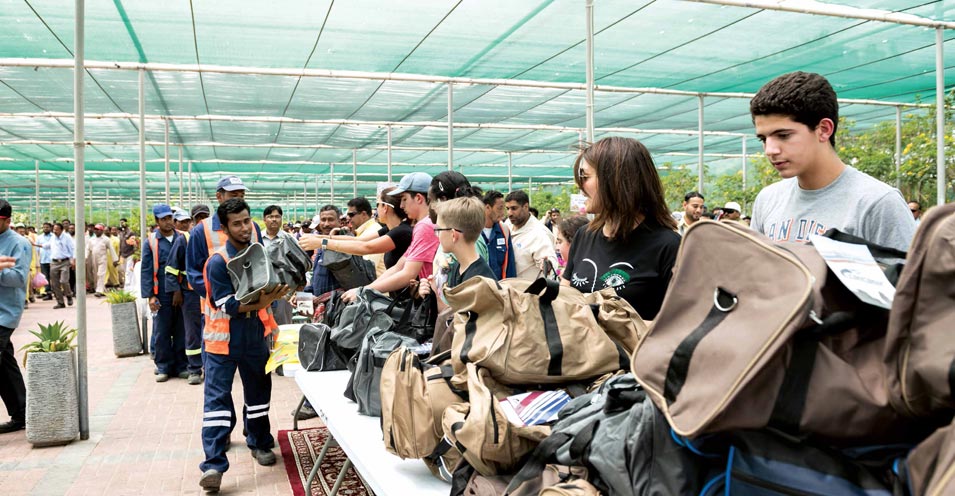 Some of the more than 1,200 contract workers who serve the Saudi Aramco Dhahran Community receive bags containing food and essential items during a recognition event organized by Zadk, a nonprofit institute.

Dhahran — More than 1,200 contractor workers were recognized last week for their tireless contributions at an event organized by Zadk, a nonprofit institute, with student volunteers from the Saudi Aramco Expatriate Schools.

Event organizer Rania Moualla, founder of Zadk (formerly Food for Change), noted: “Getting our community volunteers and especially our students to be involved in such events help them to understand and embrace lifelong values such as gratitude, compassion and appreciation of the things that we routinely enjoy in our daily lives. The least we could do is to show some appreciation to the people who work hard, away from their families, to make our community a cleaner, and pleasant place to live in.” 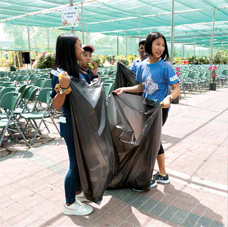 The event was carried out with the support of community residents and student volunteers from the Saudi Aramco Expatriate Schools.

Event organizer Rania Moualla poses for a photo with students who helped distribute bags to the multitude of gathered contractor workers. 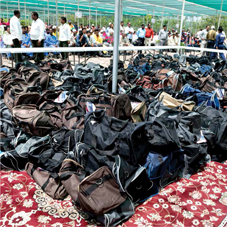 It Takes A Community

The annual event is usually held just prior to the start of Ramadan, and the initiative to show community workers that their work is being appreciated was brought up for discussion four years ago. Together with other community residents, the organizing team enlists the help of residents and students, as well as the Dhahran Commissary, to encourage Dhahran residents to purchase and donate food and essential items to support the cause.

“Saudi Aramco recognizes the importance of the Worker Appreciation Event, and shows that recognition by supporting this initiative,” Moualla said. During the event, she addressed the community workers and conveyed appreciation for their hard work. 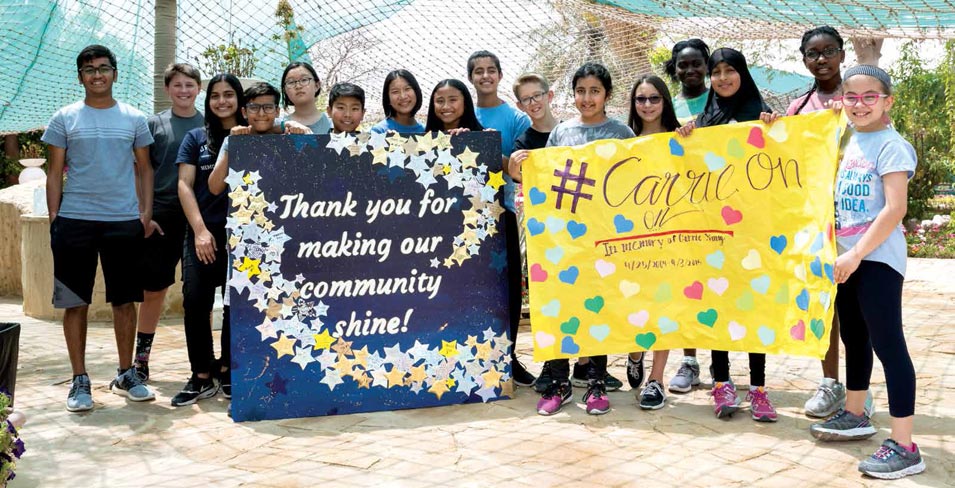 Student volunteers played a key role in the event, which is now in its fourth year.

An Opportunity To Say Thanks

The initiative to show contract workers the community’s gratitude came about through Moualla and Maisoun Hakki, a Dhahran community resident. Hakki, who will soon depart after 10 years in Dhahran to move to the U.S., plays a key role in coordinating the efforts of volunteers, Saudi Aramco Schools, and the wider community.

Michael Potoczak, a teacher at Dhahran Middle School, said it was an opportunity for Saudi Aramco school students to play a part in giving back to the community. “Our students, as well as others, tremendously appreciate the sacrifices that you made to be here. We realize that you are away from your families and it is not easy,” he said.

“We are gathered here to celebrate you and are very appreciative of having this chance to thank you for all your hard work,” Potoczak said.

A lunch was hosted for the 1,200 workers, and they each received a bag consisting of items such as dates, tea, oil, rice, lentils, and essential products.

The meaning behind Zadk comes out of a blending of Arabic zad, which refers to food, and the Arab letter k to transform the word to “zadk,” which means “your food.” Beginning in June, a new generation of Saudi men and women will enter the first programs as the doors to Zadk open and culinary arts training gets underway.