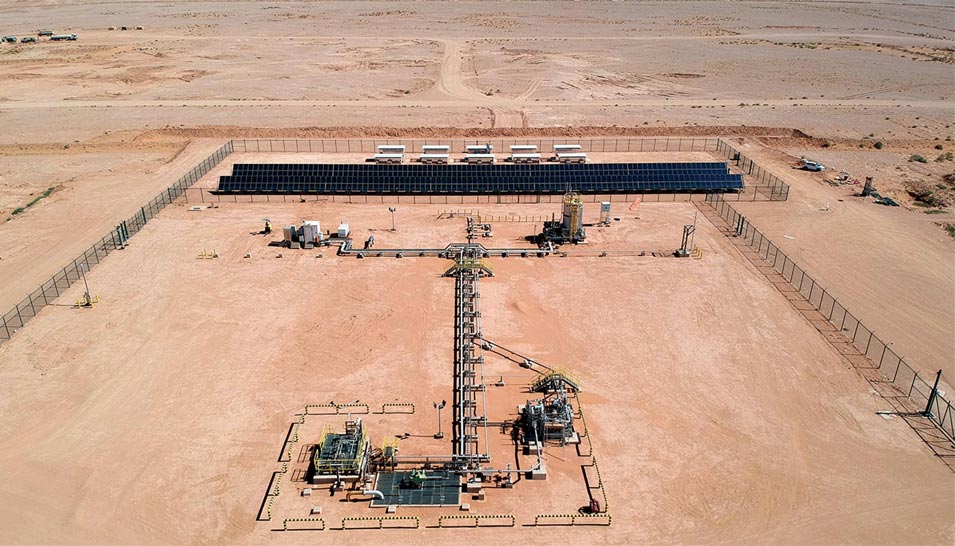 Using renewable energy at unconventional well sites such as this one in Wa’ad Al-Shamal provides multiple benefits to the company. Not only is it a reliable and less expensive way to power the remote wells, but it also reduces carbon emissions and helps to save hydrocarbons for export by providing natural gas for the region’s power generation.

A new collaboration between the Power Systems Renewables Department (PRSD) and Unconventional Resources (UR) is not only saving costs while creating value, but is also reducing Saudi Aramco’s environmental footprint in both energy supply and demand.

The organizations are collaborating by using green energy applications and technology in both ongoing and upcoming UR projects. Designed to ensure in-company projects reach maximum efficiency, the effort is focused on using smart solutions and demand-side management, as well as distributed generation and renewable resources to meet its goals.

To do this, PRSD is deploying renewable energy technology across applications — both off-the grid and on-the-grid connected solutions — and in its facilities, including office buildings, industrial facilities, oil and gas production wells, bulk plants, and others.

The Journey to Using Renewables

In line with this development, PRSD is using off-grid renewable energy systems as a less expensive power supply option. Used on a case-by-case basis, the solutions are most often designed for remote area facilities.

And to best identify, promote, and enable deployment of renewable energy deployment throughout Saudi Aramco, PRSD has updated the GIs and Engineering Standards to encourage their use.

Meanwhile, UR is consistently looking to operate and maintain its facilities in a safe and environmentally friendly manner. By teaming up with PRSD to power remote gas wells and main line isolation valve stations with solar off-grid systems, it achieves this while also optimizing electrical loads and the use of modern technology solutions.

Green-powered Well a Success to Build Upon

UR and PRSD collaboratively are establishing a long-term business relationship to promote the use of solar off-grid systems, which prove to be less expensive and more environmentally friendly than the use of transferring power by overhead transmissions lines.

A good example of this is with the groundbreaking development of the company’s first green powered autonomous gas well. The recent commissioning of the off-grid solar PV and battery powered gas well in Wa’ad Al-Shamal will be a catalyst for future development of off-grid systems companywide.

The system, which was commissioned on July 24, has a five-year battery life cycle, was completed safely and ahead of schedule, with the transformation of the well’s power system the first of 11 to be applied in the area.

And its capacity is notable, as it supports a large electrical load created by use of blower motors, methanol injection pumps, HVAC, and other systems — all supported by solar PV and battery systems.

By using off-grid solar PV and battery systems, we can effectively power remote unconventional gas wells with enough storage to operate them for five consecutive days — even without any sunlight. Deploying these systems at each well site in Wa’ad Al-Shamal could provide significant savings.

But the savings go beyond costs. Using off-grid solar PV-battery systems increases the reliability of the power supply to our critical facilities. Also, the systems are mobile and can be re-used at different well sites.

Meanwhile, the systems can be deployed faster and can help us meet and even exceed project schedule needs. Also, because the systems don’t rely on a power line grid, they have less downtime, allowing the company to more consistently maximize gas production.

The team from PRSD and UR is currently working with solar vendors to develop standardized solar/PV models of 3, 5, 7, and 10 kilowatts so these models will be available for use in the majority of solar applications across Saudi Aramco. The models will also be easily relocatable to other sites, as required.

Overall, solar off-grid systems are an attractive and reliable power generation solution that fits the needs in Wa’ad Al-Shamal well. The cost avoidance and life cycle cost savings by implementing such renewable energy solutions are significant and will add value to Saudi Aramco and its projects in the future.

Furthermore, the deployment of renewable resources in the area will reduce greenhouse gas emissions, save fuel for export, and support long-term prosperity in line with the Kingdom’s Vision 2030 and Saudi Aramco’s goals.