Together, We Make History

We Are Listed! Celebrating and Sharing A Milestone 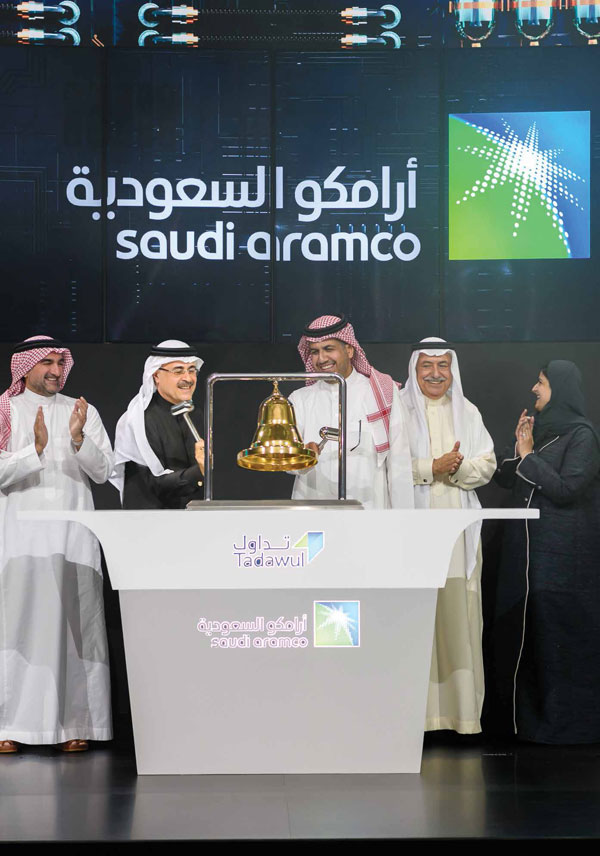 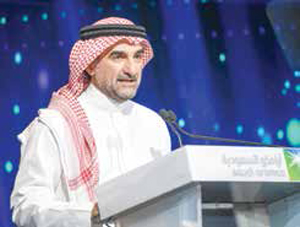 In the ballroom of the Fairmont Hotel in Riyadh — bathed in the warm blue and green light of Saudi Aramco’s corporate colors — celebrating the milestone listing were Saudi Aramco’s Board of Directors and executive management team, Tadawul’s chairwoman Sarah Al-Suhaimi, and CEO Khalid A. Al Hussan, as well as other dignitaries from the Kingdom of Saudi Arabia.

Tracing a line from the first concession agreement signed in 1933, to the first shipment of oil in 1939, through to the Saudi government increasing its participation interest in Aramco’s crude oil concession rights, production, and facilities to 100% in 1980, the record-breaking listing of Saudi Aramco on Wednesday marks yet another milestone in the company’s impressive journey of production and financial excellence.

The walls of the ballroom said it all — “Making History.” Celebrations included speeches by Al-Rumayyan and Nasser, following opening remarks by Al-Suhaimi.

There was much to celebrate as the IPO was hugely successful. With over 5 million individual subscribers and priced at the top of the indicated range, it generated proceeds of SR96 billion/$25.6 billion — making it the world’s largest ever IPO.

Not only is Saudi Aramco’s listing record breaking, but it also marks an important milestone for Saudi Vision 2030 — the Kingdom’s economic growth, job creation, and diversification efforts. As a public company, the listing also provides an opportunity to showcase to the world the company’s exceptional performance and industry leadership.

Along with Saudi Aramco, the listing is the culmination of many years of consistent effort by the Kingdom, the Saudi Capital Markets Authority, and Tadawul. This effort stretches back to 2016, following the announcement by HRH Prince Mohammed ibn Salman ibn ‘Abd Al-‘Aziz Al-Sa’ud, Crown Prince, Deputy Prime Minister, and Minister of Defense.

Following the opening of a bold new chapter in Saudi Aramco’s long and proud history, members of the Saudi Aramco Board of Directors, Tadawul officials, and other dignitaries and representatives pose in Riyadh as they celebrate the listing of Saudi Aramco on the Saudi Stock Exchange. (Photos: Abdulaziz Al-Moaiweed, Abdullah Alshammari, and Hasan AlMubarak/MPD)

A Proud and Historic Moment

“It has been more than 86 years since Saudi Aramco was founded,” said Al-Rumayyan. “During this period, the company grew and prospered. It has become the largest integrated oil and gas company in the world. And today, Saudi Aramco is a publicly traded company on Tadawul. This occasion marks an additional success in its long list of achievements.

“Today, the Kingdom of Saudi Arabia is no longer the only shareholder of the company. More than 5 million shareholders have joined, including citizens and residents in this Kingdom and other GCC countries, in addition to Saudi, regional, and international investment institutions. This is, indeed, a day when everyone in Saudi Aramco and in the Kingdom can be immensely proud.”

Al-Rumayyan highlighted that the IPO is aligned with, and supports, the Kingdom’s objectives reflected in Saudi Vision 2030.

“It reflects the visionary leadership of The Custodian of the Two Holy Mosques, King Salman ibn ‘Abd Al-‘Aziz Al Sa’ud, and HRH Prince Mohammed ibn Salman Al Sa’ud, Crown Prince, Deputy Prime Minister, Minister of Defense. Their vision is for Saudi Arabia to become a successful and leading model in the world at all levels.”

Al-Rumayyan thanked the Capital Markets Authority and the entire Tadawul team for successfully assisting Saudi Aramco on such a momentous day. He went on to thank the company’s outstanding management for bringing about the IPO and driving the company’s strategy and vision.

“Finally, I want to acknowledge all of the employees of Saudi Aramco — past and present — for their dedication and commitment, which have helped make this day possible,” he said. 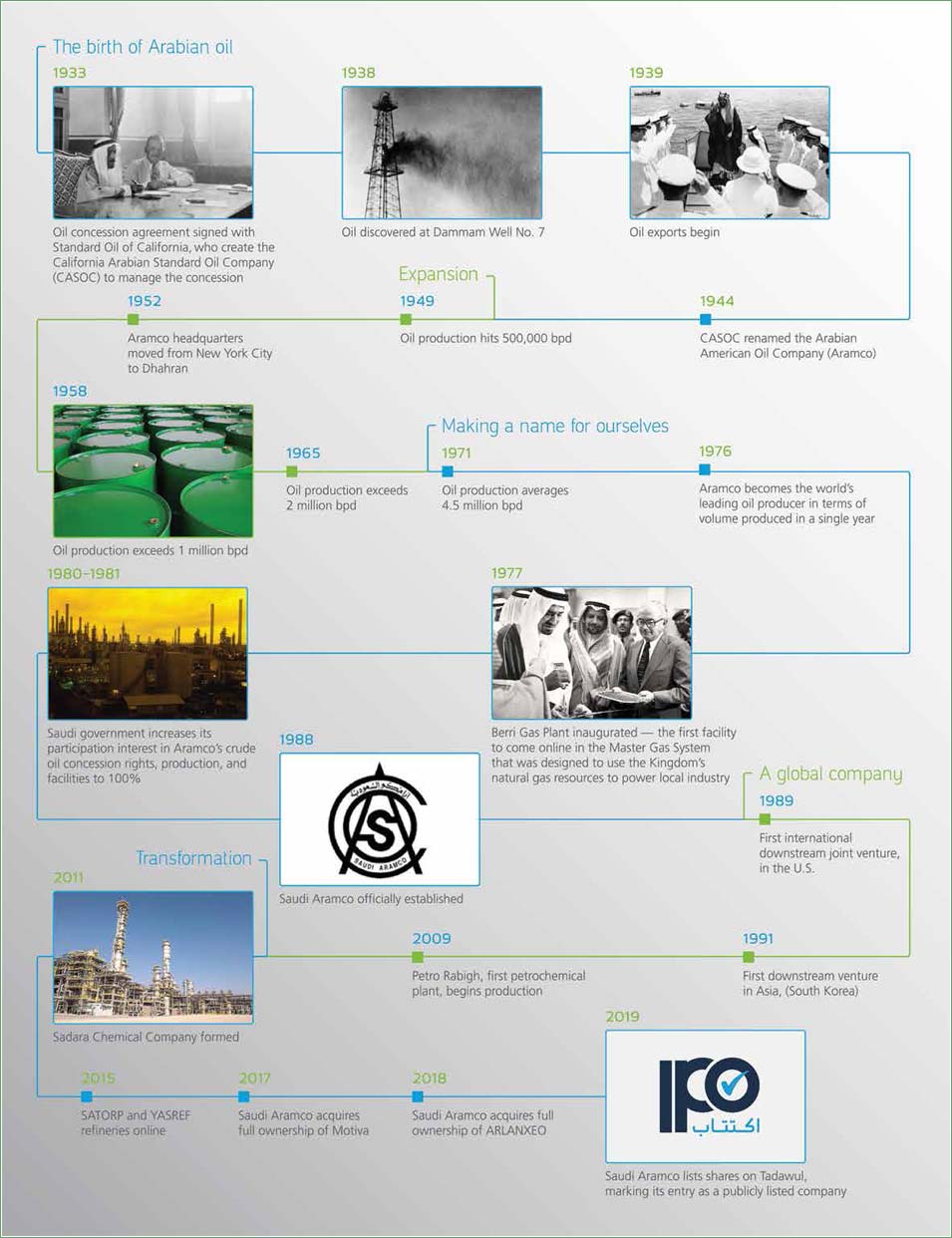 A Company Rich in History

Nasser highlighted that Saudi Aramco’s trading debut on Tadawul marks the beginning of an important new chapter in the company’s journey of prosperity over the past 86 years.

“We are a company with a rich history here in the Kingdom dating back to 1933,” said Nasser. “Our success has been based on the strong foundation and values created by our pioneers and reinforced by subsequent generations of Aramcons. Today, that foundation, those values, and this legacy are being carried forward by my colleagues around the world.”

“With SR96 billion, or $25.6 billion of shares sold, our IPO has the distinction of being the world’s largest. We believe the demand from millions of individual investors and from hundreds of institutions reflects trust in our excellent performance, in our long-term strategy, and in our vision to be the world’s preeminent integrated energy and chemicals company.

“Historic as this moment is, I am confident that we will continue on our commitment to the fundamentals, principles, and strengths which formed the foundation of our company.”

From the First Concession Agreement to an IPO

Tracing a line from the first concession agreement signed in 1933, to the first shipment of oil in 1939, through to the Saudi government increasing its participation interest in Aramco’s crude oil concession rights, production, and facilities to 100% in 1980, the record-breaking listing of Saudi Aramco on Wednesday marks yet another milestone in the company’s impressive journey of production and financial excellence.

Leading a moment of warm applause, Nasser said, “I would like to take a moment to thank the people of Aramco — both my colleagues as well as previous generations of Aramcons — who have made Saudi Aramco the unique and outstanding company it is today.”

Nasser concluded by saying, “We believe that the future will be exciting, with plenty of promise and potential for growth for our company and our country, and we are delighted to welcome you on our journey of delivering energy to the world.”

In her speech, Al-Suhaimi thanked Saudi Aramco for the company’s confidence in Tadawul and congratulated Nasser and the Saudi Aramco team for their success, achieved in record time.

At the conclusion of the speeches, an inspiring video was shown, taking viewers on a journey through Saudi Aramco’s history to the momentous occasion of its public listing.

From there, the excitement rose with a countdown to the formal inclusion of the company on Tadawul. At exactly 10:30 a.m., the sound of the celebratory bell rung by Nasser and Al Hussan announced that a new era for Saudi Aramco had truly arrived.

Saudi Aramco Employees: In Our Own Words 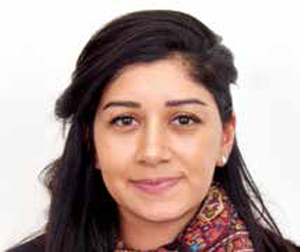 Fai K. Aldossary, domestic marketing analyst, Retail and Lubes Growth and Origination Group, Dhahran
This is a monumental milestone for the company to be recognized as the foremost driving force of our corporate values. It makes me proud to be part of this journey that goes hand-in-hand with the Kingdom’s Vision 2030. 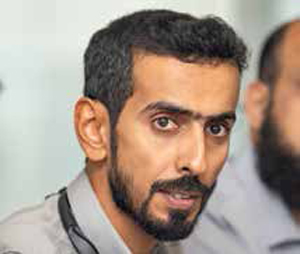 Fahad M. Osaimi, project manager, Gas Facilities Projects Department
To me, it’s a proud moment to see the largest and one of the most anticipated IPOs being listed in the Saudi market. And it’s not just any company that has such scale and attention, it’s Saudi Aramco. 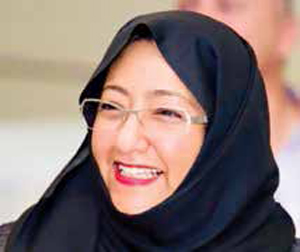 Reem A. Al-Ghanim, Chemicals Human Resources and Support Services Division
The Saudi Aramco IPO to me means growth — both for Saudi Aramco and the Kingdom. 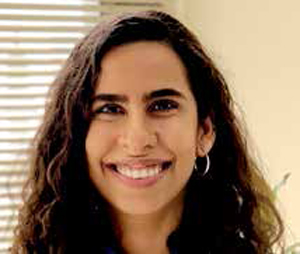 Maria G. Al Faraj, engineer, Inspection Unit, Dhahran
This is a historical moment for our company and country. We’re embarking on a new journey that will strengthen our footprint in the local and international markets. The IPO is an example of how we’re continuously challenging ourselves to reach new limits and to achieve greater successes. It’s exciting to witness this unique transition, and I look forward to what’s ahead.

Employees gather in the North Park Auditorium (above) and the EXPEC Advanced Research Center auditoriums in Dhahran to watch broadcasts of the Listing Day ceremony in Riyadh. Employees from across the Kingdom celebrated the big day by gathering to watch the historic event before partaking in celebrations at their individual locations. See more photos on pages 6 and 7. (Photos: Mohammed AlShaikh and Ding/MPD)

What We Are Saying About Our IPO 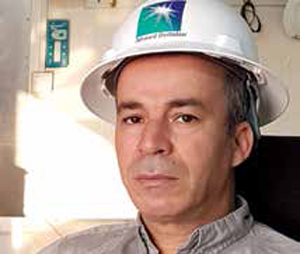 Ahmed Dellalou, drilling rig foreman, Drilling and Workover, Arar
This is a major milestone — not only for Saudi Aramco — but also for the Saudi economy. This makes me proud that the biggest oil company in the world is opening its hand to the entire world. 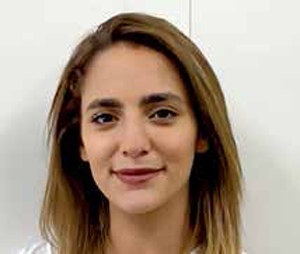 Dalia S. Abushulaih, HR generalist, Management and Professional Development Department
To me, the IPO opens doors to new opportunities. It is truly an enabler to our new way of thinking and doing business. I see that it reinforces Saudi Aramco’s commitment to the Kingdom and our new shareholders. I feel that this IPO will help us to share Saudi Aramco’s value proposition to the world. 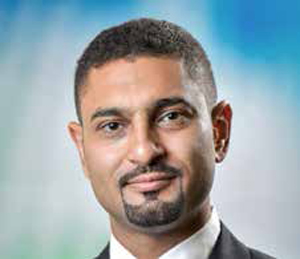 Karam S. Yateem, supervisor of Intelligent Fields Unit, Northern Area Production Engineering and Well Services Department, Ju’aymah
I am proud to be an employee of Saudi Aramco while the company is achieving such a major milestone. The Kingdom is going through a transformation in line with this ambitious economic reform and the country’s Saudi Vision 2030, and I am glad to play a part. Working for this great company of ours for more than a decade, I have seen the emphasis on safety, people, and our commitment toward supplying the world with energy grow. This IPO will affirm Saudi Aramco’s vision to be the world’s preeminent integrated energy and chemicals company. 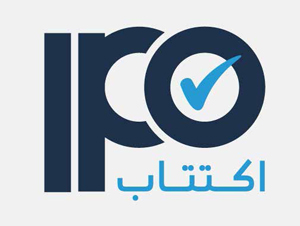 Celebrations Across the Kingdom

From Ras Tanura to Jazan and all points in between, Saudi Aramco employees celebrated a historic day with the listing of the company on the Saudi Arabia Stock Exchange (Tadawul).

All hands were on deck — and on the knife to cut the cake — at our facilities in Yanbu’ on the Red Sea Coast. 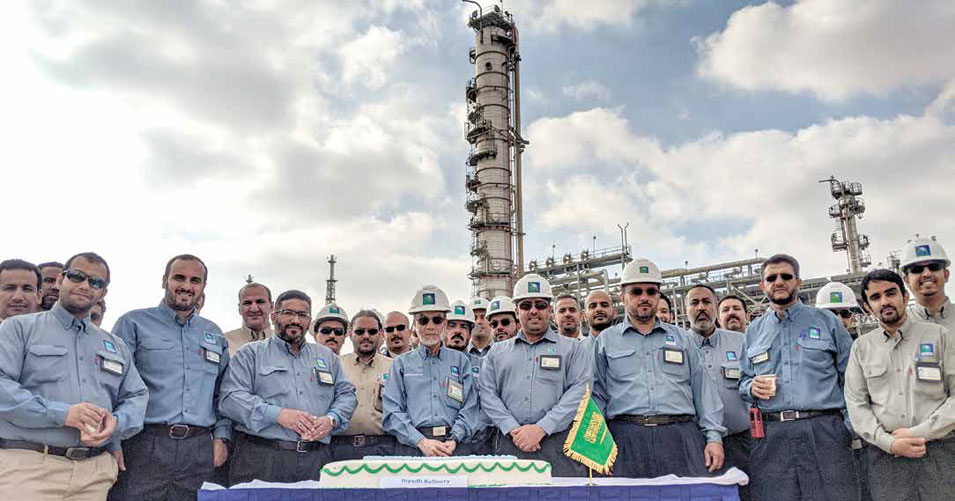 Riyadh Refinery provides the backdrop of the Listing Day celebration there. 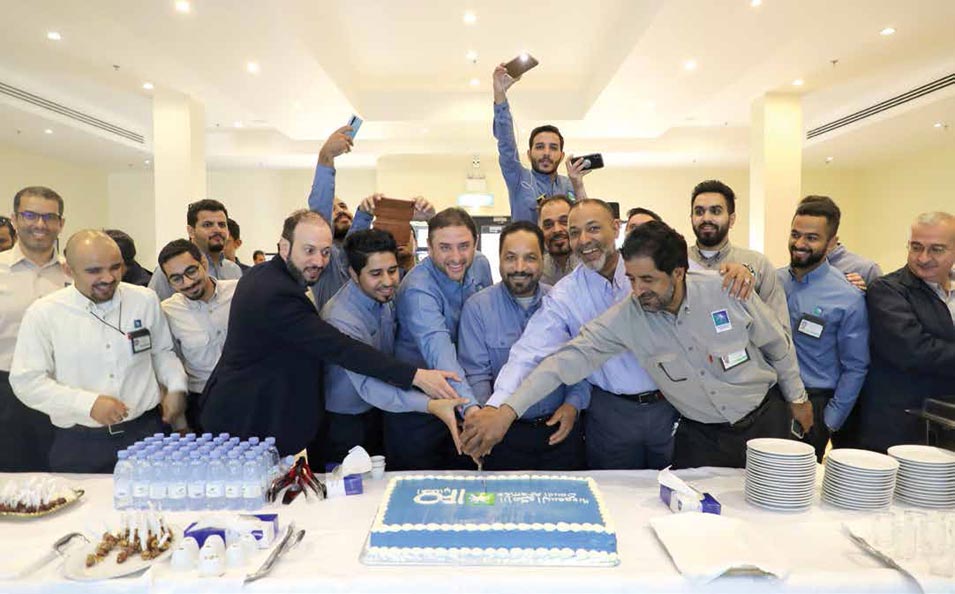 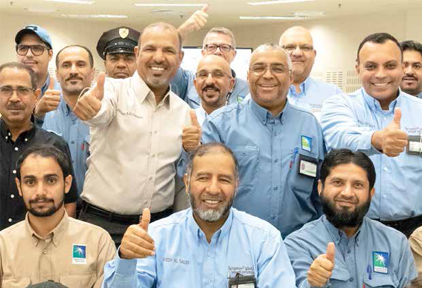 In Jazan, the employees were all smiles and thumbs-up for the big day. 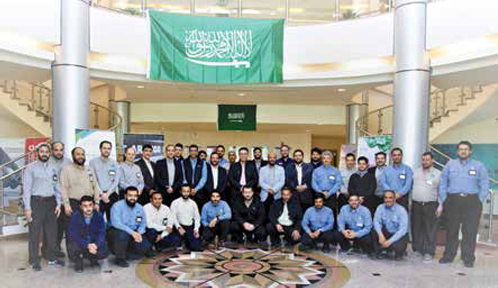