The Gift of Kings 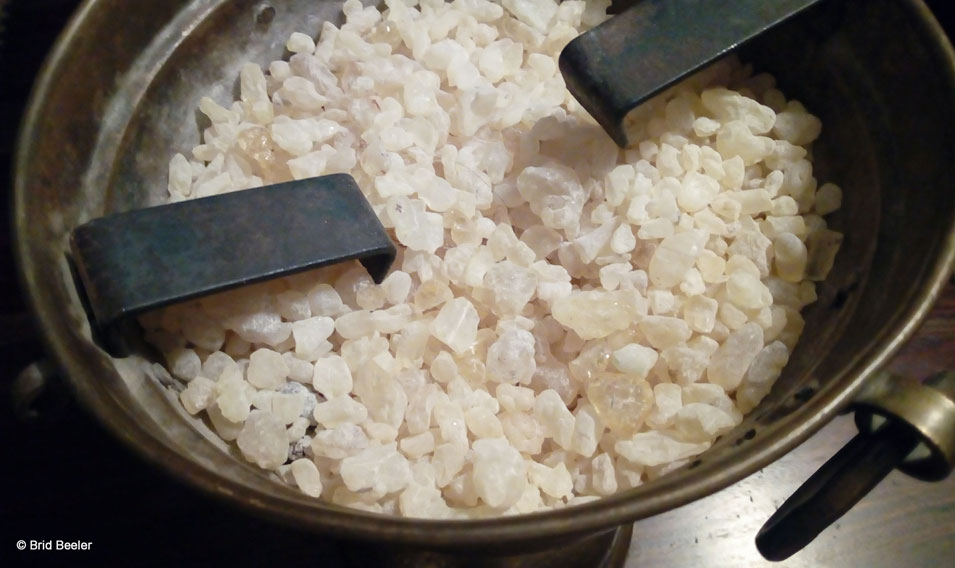 Of all the senses, our sense of smell is one most closely linked with memory. The slightest hint of a familiar smell can trigger powerful memories of treasured moments past. Little wonder that when I cast my mind back to my first visit to an Arabian souq, it is the tantalizing aromas that I remember first and most vividly. I recall being assaulted by the overwhelmingly sweet, exotic smells floating on the air along the main thoroughfare and the mysterious side passages. Investigating further, I was drawn into a tiny perfume shop where I quickly became enveloped in a thick haze of smoke issuing from an incense burner. To my delight, I had discovered frankincense, luban, the Gift of Kings.

Frankincense, I learned, was a highly prized commodity that had been sought after for thousands of years. After all, didn’t the three wise kings in the Biblical story of Christmas bring gifts of frankincense and myrrh to the baby Jesus? Long before those three kings visited Bethlehem, and ever since, the cultural significance of frankincense has been enormous.

Traditionally, every household in the Middle East has incense wafting away in the majalis or salon where visitors are greeted. Like Arabic coffee, it is part of the culture and the best is taken out and bestowed upon the visitor, rather like the tangible symbol of Ahlan Wa Sahlan (welcome). The ritual of passing the incense from one guest to the next involves the wafting of the scented smoke from the embers into your hair and around your head while inhaling the scent. On one such occasion, I suddenly realized that the scent I was being enveloped in was my own hair sizzling on the embers! Fortunately, I survived to tell the tale. 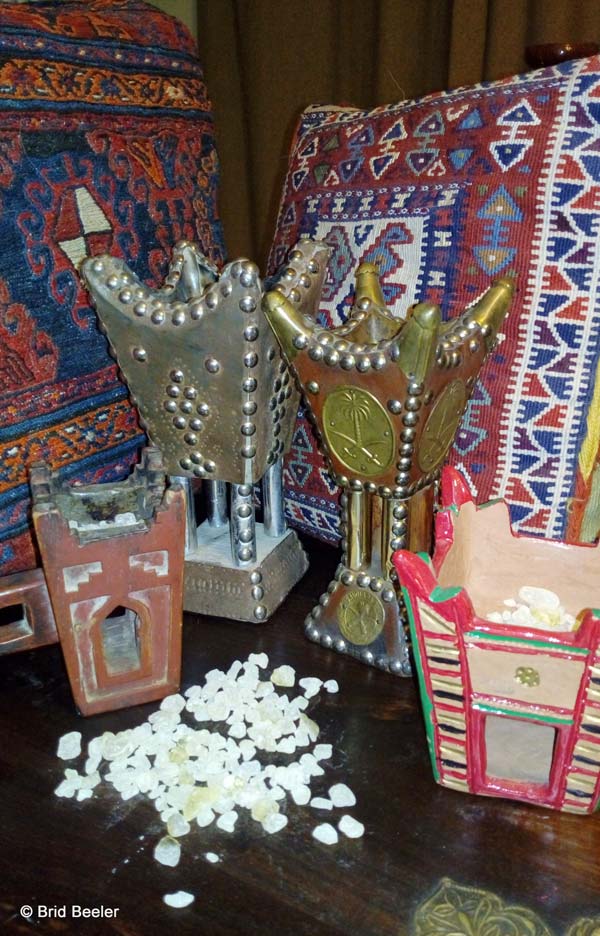 For some 6,000 years, frankincense has been harvested from trees growing primarily in South Yemen and Dhofar in southern Oman. It is also found in Ethiopia, Somalia and Djibouti but in smaller quantities. While it has been used to flavor foods, treat disease, lessen swelling, relieve stress and as an embalming agent; it is the fragrance of frankincense that is most valued today. The best frankincense is the pure white small pieces whereas myrrh is gold in color, almost like a liquid amber resin. The best frankincense I have ever seen was snow white a precious gift from a dear Omani friend. I have not been able to find this exceptional quality of frankincense since, no matter how hard I have looked over the years.

Ancient camel caravans once carried 3,000 tonnes of the precious resin yearly from Southern Arabia north to the Levant and the Mediterranean. The cameleers sought safety of passage from the marauding desert tribesmen at Mada’in Saleh, today a UNESCO World Heritage site. Rest and respite at the oasis of Al Ula provided by the Nabateans ensued security and safety of passage upon receipt of 25% of the value of this prized commodity from the cameleers. Thousands of years later, frankincense remains a commercially viable product. It is estimated that the Roman Catholic and Eastern Orthodox Churches alone burn some 50,000 tonnes of frankincense a year.

Those three kings had a good idea. For many, frankincense still makes the perfect Christmas gift for family and friends back home or as a hostess gift over the holidays. In the souq, one easily can find an array of Kashmiri painted papier mache boxes, many depicting camels on the lids to hold your gift of frankincense and myrrh. And, if frankincense in its traditional resin form does not seem an appropriate gift, you can also find it in perfume form selling in the high-end shops. This holiday season, it is comforting to think of new generations discovering the enduring magic of the Gift of Kings.