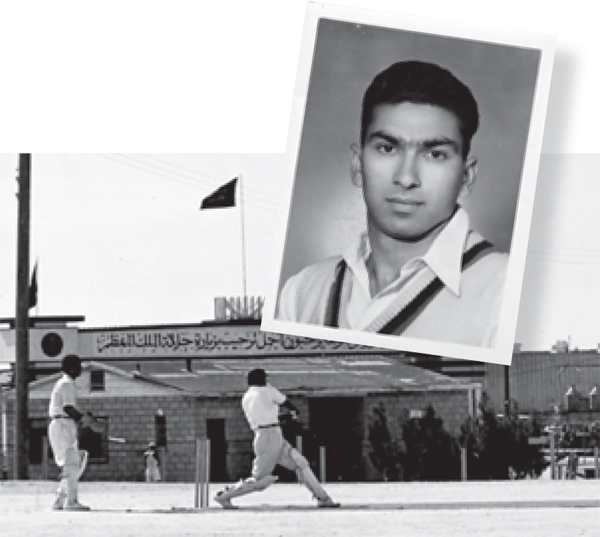 Naushad Shah was just four years old when he left Saudi Arabia with his family in 1978 upon the death of his father, Aramcon Yousaf Shah. However, tales of his dad’s fearsome batting on company cricket fields, enhanced by “treasure boxes” of pictures in his home in Lahore, Pakistan, have kept him close to the company.

“My father learned shorthand to cope with piled-up assignments including stock-taking and inventory management in the A-Block [the Admin. Bldg.] in Dhahran, but he was famous in the community as a cricketer for the Aramco team,” Naushad said.

Yousaf Shah arrived at Aramco in 1956 from Pakistan, where he excelled at cricket.

“My father played cricket in his early days at the district level at Sialkot, a city of sports heritage and culture in Punjab,” said his son. “After he was hired by Aramco he started playing cricket for a company team.

“He had an honor of becoming the team captain. At Aramco, his team won many matches. 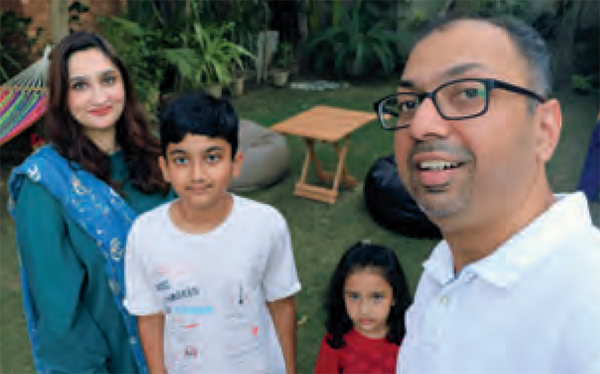 His son Naushad poses with his family in Lahore, Pakistan.

“I was very young at that time, but it vaguely comes to my mind that his batting was his strength and his ‘coverdrive’ was one of the deadliest during matches. His teammates were of different nationalities….”

Shaikh Amin, who joined Aramco in 1948 and retired in 1985, recalled watching Shah play against teams from Ras Tanura and Abqaiq.

“He was an excellent batsman…making so many runs,” said Amin. “If he had not joined Aramco he probably would have been picked by Pakistan’s National Team.”

Naushad returned to the kingdom in 2019 for the Fourth KSA Expatriates Reunion. He said he was struck by nostalgia in al-Khobar where he was born and lived with his family, and in Dhahran when he remembered his dad’s stories.

“Most of the things had changed a lot in al-Khobar, but some of the monuments were still in place, with some renovations,” he said.

One thing that had not changed was cricket’s place in the Shah family. “I play cricket as a recreation activity with my kids and friends every fortnight,” said Naushad.