The Arabian Jambiya - Art with a Cutting Edge 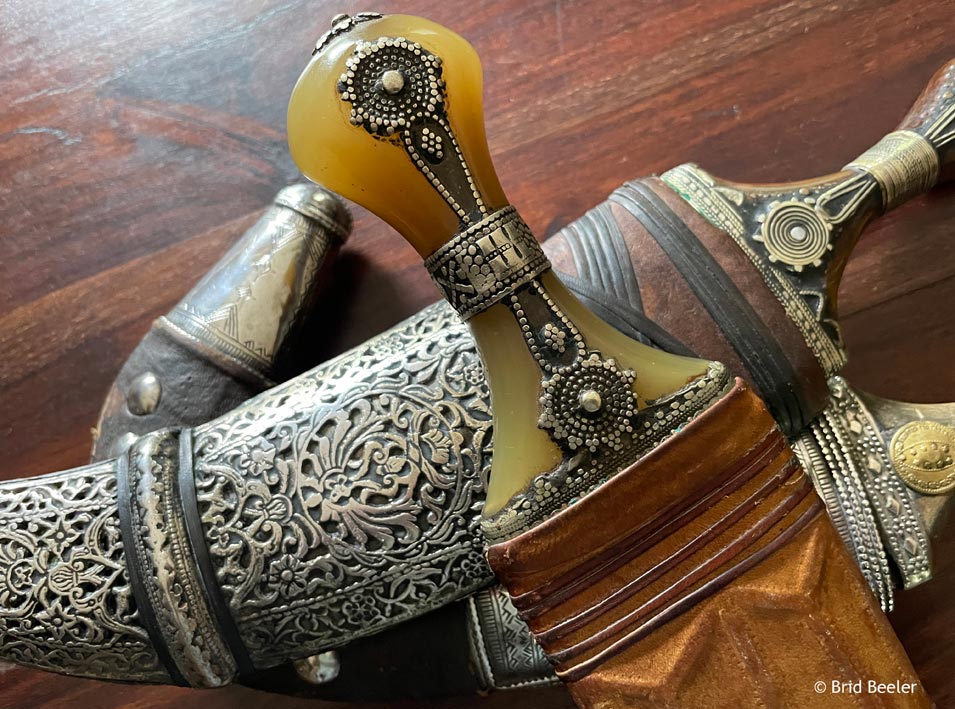 I hate knives! In the cinema, whenever there is a scene with knives being flashed around, I get squeamish and must look away. I have no idea why I hate knives, but I find them truly scary. This makes it difficult to explain why I have a collection of jambiyas, the large, curved daggers of Arabia. When my husband brought home a jambiya he had purchased in the souq in Riyadh, I was not enamored with it at first, but did find it oddly fascinating. Despite myself, I began looking at jambiyas in the souqs and learning more about them. We ended up with quite a collection, which is currently displayed in a glass-covered wooden bowl in our living room. Even if you are not a big fan of weaponry, you must admit that, with their elaborately decorated hilts and sheaths, jambiyas are works of art. 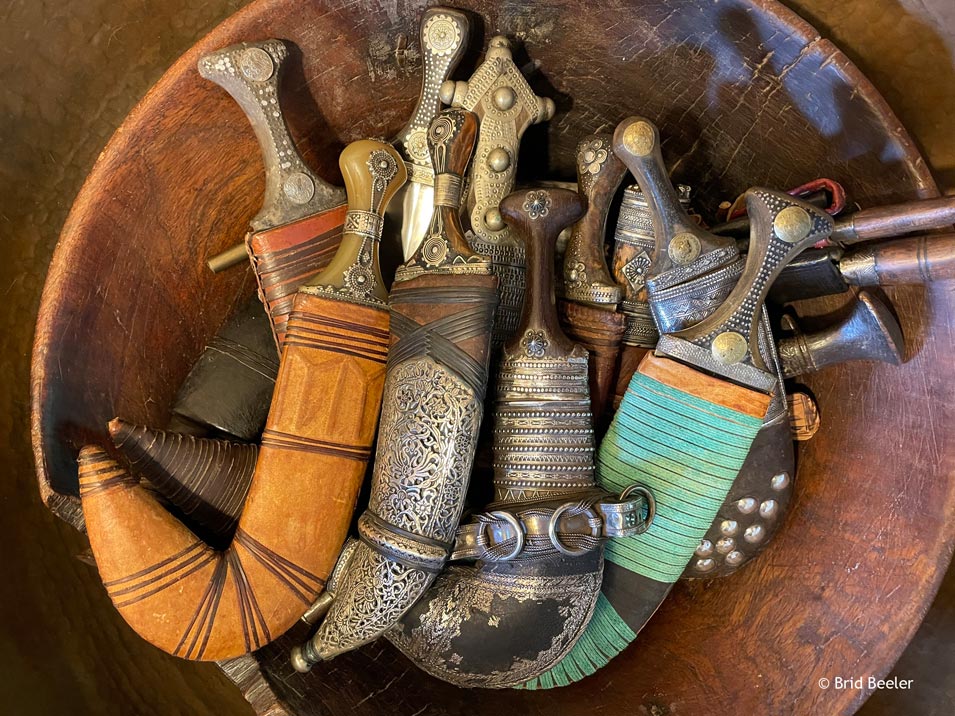 The Arabic word for ‘dagger’ is khanjar. The term jambiya applies only to the heavily curved daggers of the Gulf. All true jambiyas have extremely thin blades with a central rib giving strength to the blade. Some older ones have two or even three of these central ribs. The blade, although curved, is not as heavily curved (or as long) as the leather-covered wooden sheath. The handles are usually of wood, bone or resin and heavily decorated with silver wire, coins and gold or silver inlays. Thankfully, the highly criticized practice of making jambiya handles from rhino horn is now illegal and you will rarely see a jambiya with a rhino handle in the souqs. 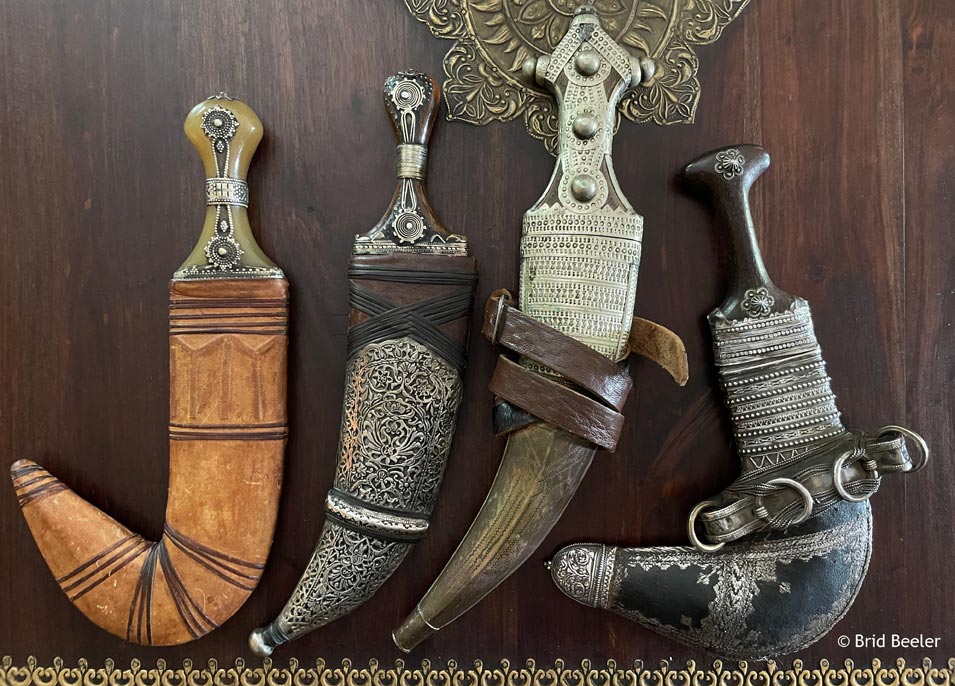 There are four types of daggers native to the peninsula. The traditional jambiya has a J-shaped, wooden sheath, covered with leather, and usually wrapped with leather or cloth cord. A turquoise cord wrapping is particularly common in Yemen. The example in the photos with the yellow plastic handle was purchased in Najran in the early 1990s. This dagger style is worn upright, exactly in front of the body.

Thumah (or Tuza) daggers have less of a dramatic curve to the sheath but are otherwise very similar to the general jambiya pattern. This style was once reserved for Qadis (judges) and Sayyids (descendants of the Prophet Muhammad) and was purchased in Yemen. The thumah is often highly decorated with ornate silver work and worn on the right side of the body.

Another khanjar common to the Nejd is the Dharia dagger, also called ‘Wahhabi’ daggers. Like the Thumah, it also has less of a curve to the sheath, which is usually entirely covered with metal: the upper half silver, the lower half brass. Dharia blades are thicker and lack the raised central rib. Some are quite long and are essentially swords. The example in the photo was purchased in Riyadh in 1986. The Dharia style was worn in a horizontal way across the body and the hilt always to the left, which seems like it would be awkward to withdraw, but perhaps a ‘fast draw’ was not an issue.

Finally, and most beautiful in the opinion of many, are the L-shaped Khanjars of Oman, which appear on the country’s flag and currency. In addition to the shape of the sheath, Omani daggers differ from other styles by having more elaborately decorated silver scabbards and hilts, including large silver rings for attaching the sheath to the wearer’s belt. Although not worn every day, as in Yemen, the Omani Khanjar is an essential accessory in the owner’s wardrobe, worn on special occasions like weddings and Eid celebrations, and on formal occasions such as meetings with government officials.

All jambiyas are essentially ceremonial these days and are worn more as a fashion statement than for any other reason. Rather like pieces of masculine jewelry. One rarely sees a jambiya being worn in Saudi Arabia, other than in the Asir, but in Yemen, few males over the age of 12 (often younger!) would dream of going out of the house without strapping on their jambiya. But there too, the jambiya is not seen so much as a weapon, but as a sign of manhood, and is often a treasured keepsake handed down from father to son for generations. 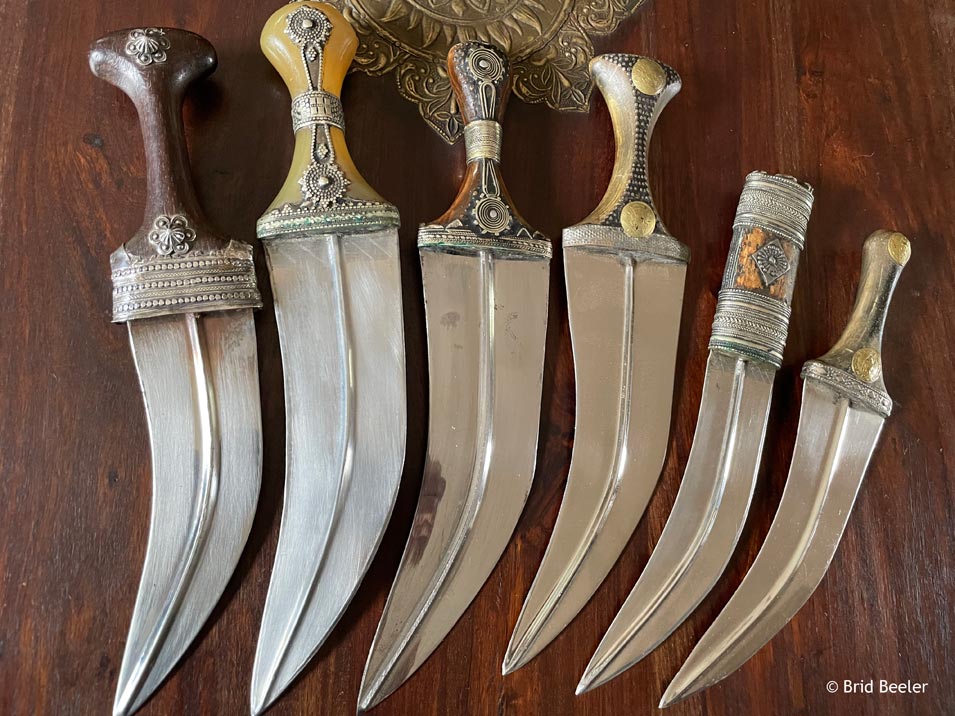 The only time I saw a jambiya put to any meaningful use was on a trip to Yemen in 1991. We stopped for gasoline in the northern highlands and one of the cars in our party needed oil. The pleasant young man working at the station nonchalantly whipped out his jambiya and with a quick stab and twist made neat holes in the top of the can to pour the oil through! Clearly not its intended purpose, but practical nonetheless.

What are Khanjars worth? More than you might expect, although the gold encrusted “Million-dollar Jambiya” featured in the winter 2006 issue of Arabia Felix magazine is certainly an exception. Expect to pay at least a few hundred dollars for an authentic jambiya in good condition with a leather sheath and they often trade for many times that amount. 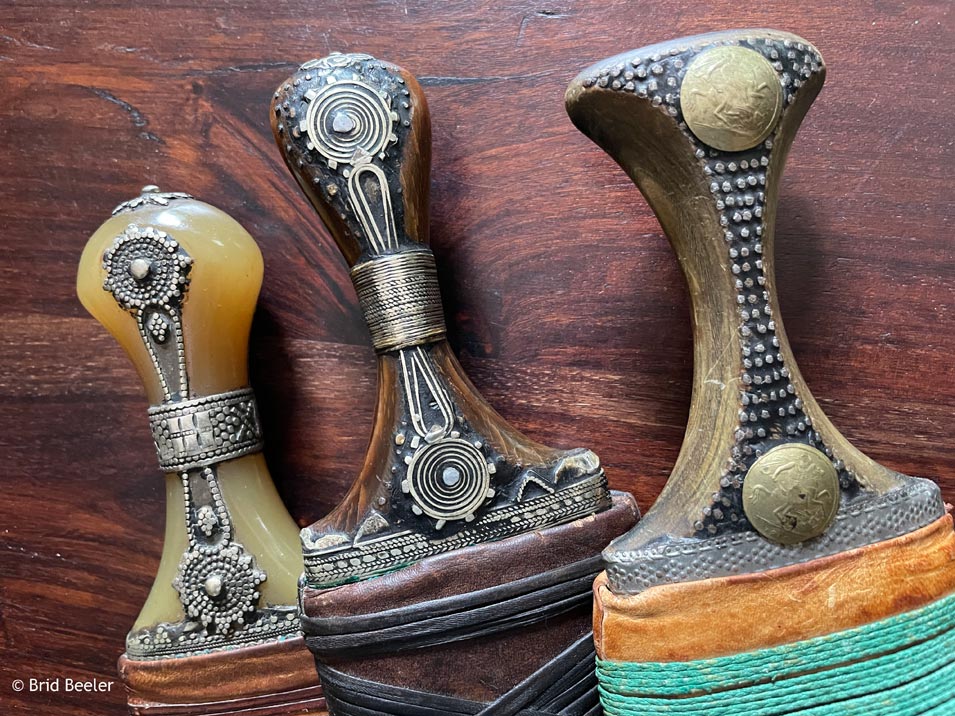 We actually got a free jambiya once. While digging in the flower bed of our house in Sana’a, the spade struck something hard, which turned out to be an old rusty jambiya! I would love to know the story of how it got there. Had a previous owner simply dropped it? That doesn’t seem likely. Had it been used in some dastardly crime and buried to hide it from the police. No, that sounds like a TV crime drama. We’ll never know how it ended up buried in our garden, but we cleaned it up, bought a sheath in the souq that fit, and added it to the collection.