Saudi Caviar is being Produced in Dammam

A group of Aramcons and their dependents were given an exclusive tour of Caviar Court during the KSA Reunion in March 2019. Catherine Enfield, daughter of Peter Enfield (1971-1987), gives you a detailed account of how caviar is being produced in the Kingdom. 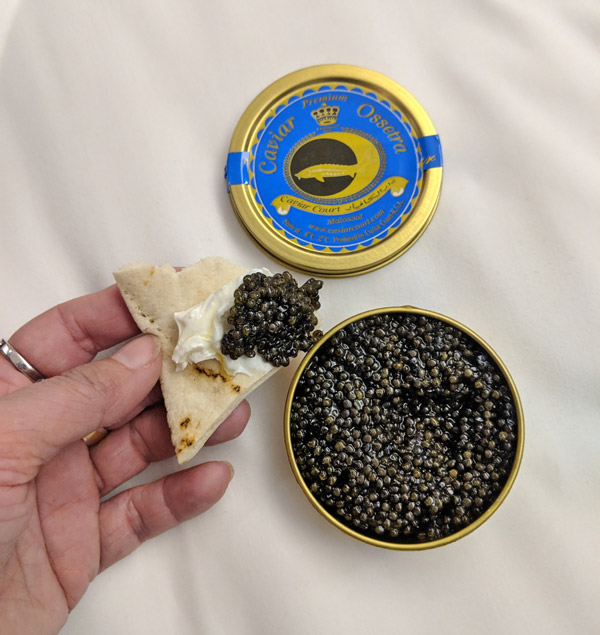 One does not expect to see a label on their tin of caviar stating, “Product of Saudi Arabia”. After all, the sturgeon that produce caviar are found in countries that have plenty of cool, fresh water - something that is not found in large quantities in Saudi Arabia. Yet thousands of Ossetra sturgeon swim in large pools within the desert kingdom at Caviar Court, the Middle East’s only caviar production facility.

When the Soviet Union dissolved in 1991, the last thing on anyone's mind was that Caspian Sea caviar would soon be on the verge of extinction. The Caspian Sea has been known as the main producer of caviar for millennia, with the most prized being Beluga caviar. The Soviet breakup meant that what had once been two countries surrounding the Caspian soon became five: Russia, Iran, Kazakhstan, Turkmenistan, and Azerbaijan. ​Soon these five countries all began harvesting the same coveted sturgeon without any regard for the amount they each pulled from the waters. By 1997, the Caspian had become so overfished that the United Nations stepped in. The Convention of International Trade of Endangered Species (CITES) issued caviar quotas in 2003, greatly reducing the number of kilos each country could harvest. As of 2014, no fishing/harvesting of caviar sturgeon is allowed from the Caspian Sea.

Dr. Abdullah Al Faris, a successful Saudi entrepreneur, saw an opportunity. Over this same time frame another development had taken place that would greatly influence caviar production – aquaculture, or fish farming. Russia’s own 2002 ban on commercial sturgeon fishing was to encourage Russian aquaculture. China and the United States had also started to develop large aquaculture operations. Why not start cultivating and harvesting sturgeon caviar in Saudi Arabia? In 2001, Dr. Al Faris opened a facility next to an army base in the city of Dammam, Saudi Arabia. He named it Caviar Court.

There are 27 species in the fish order of Acipenseriformes, of which two are actually paddlefish and not sturgeon. Of the 25 sturgeon species, three are found in the Caspian Sea. The largest of all sturgeon, the Beluga, are the most well-known and prized for their large, black roe. Highly endangered, their size makes them less popular to raise. The smallest is the Sveruga. The Sveruga can produce caviar, but due to the small size and yield, they are not considered worth the investment to raise. The middle size is the Ossetra, which generally gives a golden, dark roe. The size and lifespan of the Ossetra has made it a favorite for aquaculture of caviar. 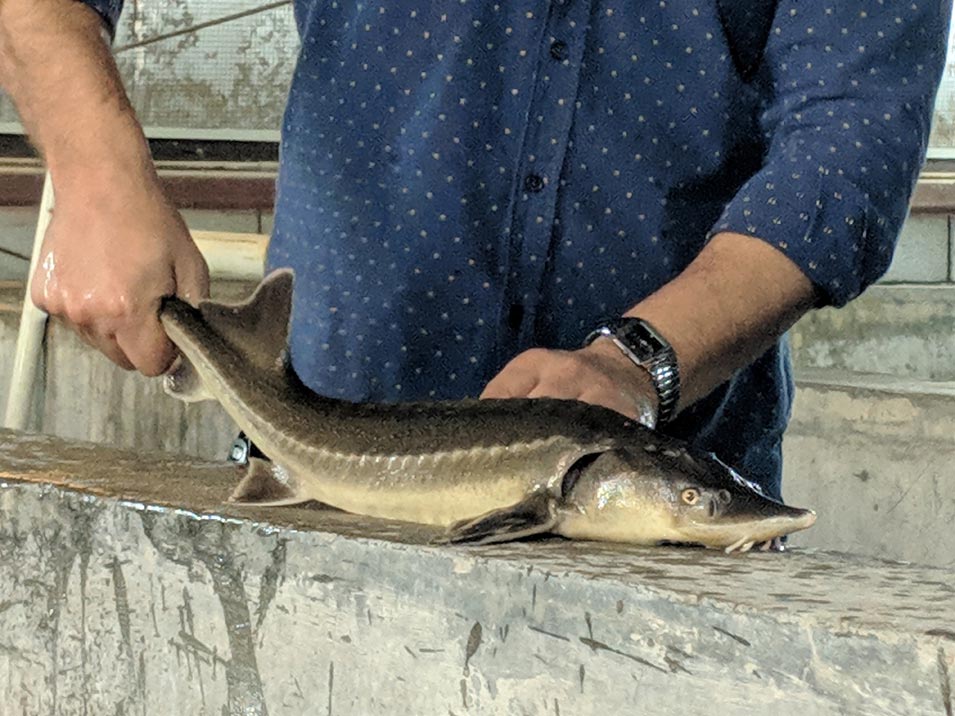 But could a nation with little water sustain an Ossetra aquaculture operation? Turns out the water situation in Saudi Arabia was perfect for the sturgeon due to the source – wells. The Caspian Sea is technically a giant lake with water coming from rivers and streams throughout Europe. The water is fresh, with a very low salinity rate ranging from 1 to 13.5 parts per thousand. Compare this to the North Atlantic’s salinity of 37 ppt. The well water that Al Faris draws for his tanks is 3 ppt, making it perfect for sturgeon.

Pierre Hakim, General Manager, gave us a tour of the Dammam facility and explained their farming operation. Hakim points out that the well water is fully recycled in their operation. With water being so precious, the Saudi government has set limits on how much water can be drawn from wells. In the case of Caviar Court, the recycling is so efficient and controlled that only 3% has to be replaced due to evaporation.

Hakim points out the three filtration methods that are in each of the warehouses. First is a drum system that will filter out all the solid waste from the fish. This is taken and used to fertilize the trees on the property. The second system is a biofilter with bacteria that clean the urea from the water. The final filtration is done using ultraviolet light which destroys 99.99% of harmful microorganisms by attacking their genetic core (DNA).

Sturgeon are bone plated fish that have remained fundamentally unchanged for millions of years. They can live to be over 100 years old and record sized fish have grown to be over 18 feet long and over 2000 pounds. One biological feature is also the cause for its severe depletion. Wild sturgeon can take anywhere from twelve to twenty years to mature to breeding age. Therefore, when they are caught and killed before maturity, the chances for the breed to reproduce itself are greatly diminished. Without enough mature fish to reproduce, the quantities steadily decline. 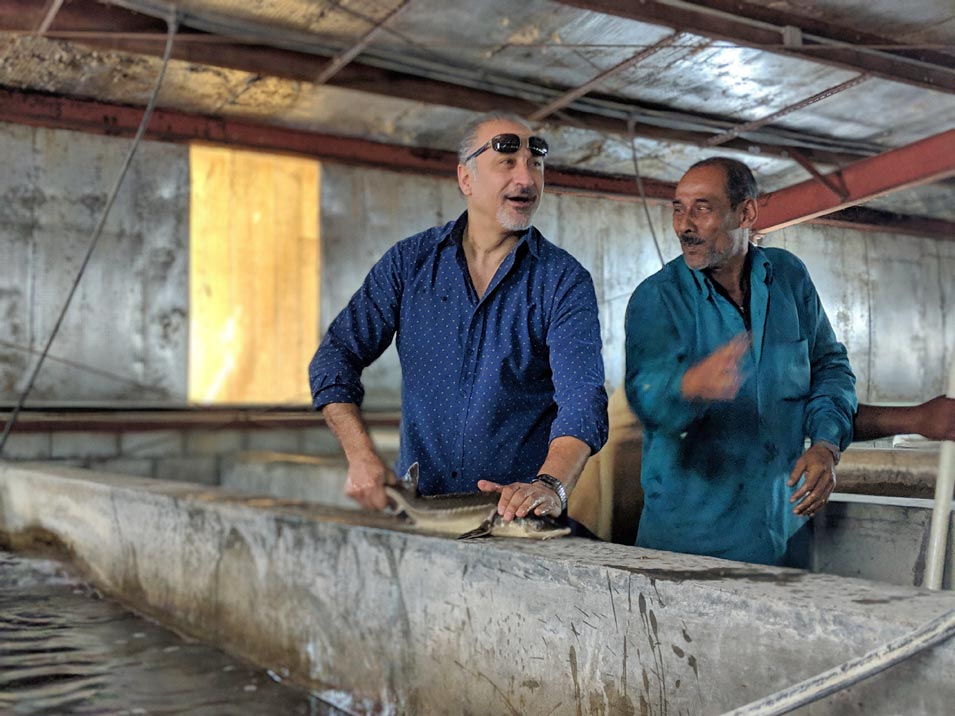 In an aquaculture environment these factors are controlled. The fish are now raised in big tanks that are kept at a constant temperature of 75º F/24º C from the well water provided. In the wild, the sturgeon would eat well and grow a lot in the summer and then their metabolism and growth would slow during the winter, sometimes to hibernation. In the tanks there is no differentiation of seasons and the fish just eat and grow year-round. Thus, the farmed sturgeon will grow significantly faster than wild. Farmed Ossetra will mature in 7-8 years in contrast to the 10-16 of their wild counterparts.

Caviar Court buys the fertilized eggs from a German supplier and they are hatched in the first warehouse. The hatchlings will remain and grow in this warehouse until they are one year old before being transferred to slightly larger tanks in the second warehouse. It’s at the end of this stage at 3 years old that the fish will be screened for gender using ultrasound. Males are separated and sold while the females are kept for future caviar.

For years 4-8, the fish go to a third warehouse with not only bigger tanks, but also the addition of extra oxygen into the water. By this time the fish have reached a size that they are consuming larger amounts of oxygen than the recycled water can supply. Additional oxygen is therefore pumped into the water.

Once the females have reached maturity and thought to be carrying eggs, they are biopsied. A slit is cut into their bellies, a small tube is inserted, and some eggs are sucked out. The eggs are examined for size and color to determine if they will develop enough to be harvested caviar. The fish that are ready for harvesting are transferred for a final time to another set of tanks. This final stage is where they are kept for one month without food. The fasting is used as a detox. The caviar and meat from a fasted fish has a cleaner, fresher taste than if they were allowed to continue to feed.

Caviar Court harvests year-round, every two months. The fish are processed in an on-site facility that has the internationally recognized certifications of ISO 22000 (International Organization for Standardization), HACCP (Hazard Analysis and Critical Control Point), and SFDA (Saudi Food and Drug Authority). 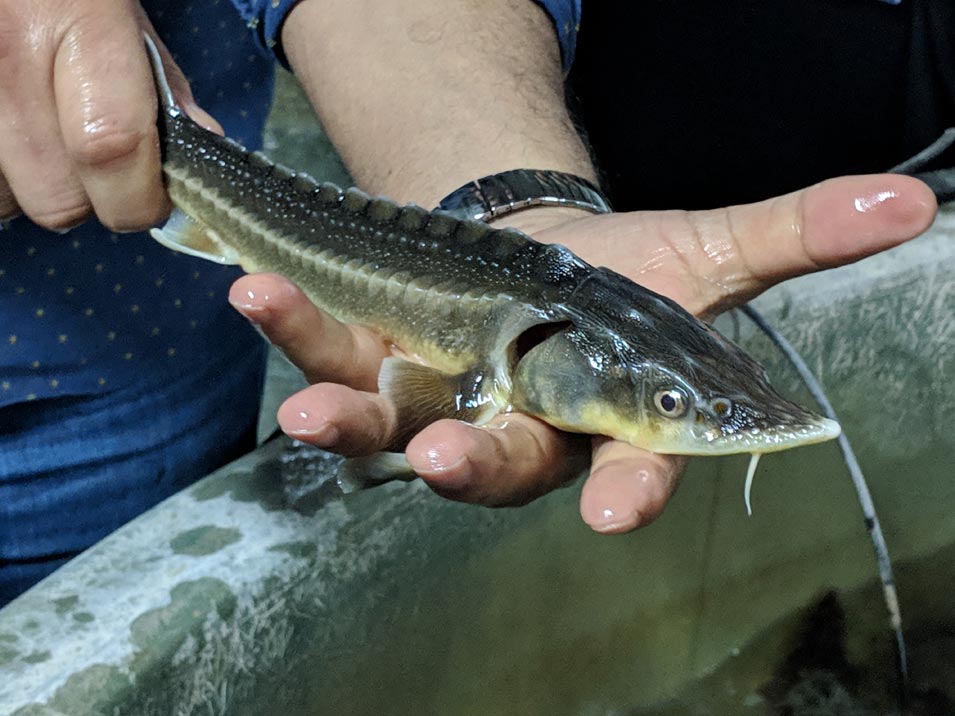 The ovary sacs run from the back, around the sides, to the front of the fish on both sides. Each sturgeon’s ovaries are placed into a single plastic bag. No fish ovaries are ever mixed with another. Any kind of cross contamination or adulteration is not allowed. The color, quality, and size of the caviar can differ considerably between fish and so to see any indication of mixing would ruin the reputation and the price of the product.

The fish itself is processed for its meat. It is gutted, finned, and then sold frozen to distributors in Russia.

The caviar processing and packaging are done for each bag of caviar, one at a time. The first step is to separate the roe from the ovary membranes. The unfertilized eggs are clinging to the embryonic membrane. To separate the membrane from the eggs the sacs are rubbed over a stainless steel screen with holes for the eggs to drop through. The membranes and fat are then tossed.

The cleaned eggs are now put into a tank that is filled with cold water (4º C). The flow of the water stirs the eggs so that they fall and any remaining membrane floats up and out of the container. The eggs are then put into a sieve to drain.

The caviar from each sturgeon is then weighed. The weight is important because it will determine how many tins the caviar will fit in. There are six different sized tins and based on the weight the staff could pull a few different sizes that will equal what that weight will fill.

Caviar Court uses the Malossol curing method. Malossol is a Russian word meaning “little salt”. The Malossol method of curing can be anywhere from 3-5% added salt. This level preserves the roe while allowing the flavor of the eggs to come through. Hakim explains that they use a non-iodized salt and add enough salt to equal 3.5% of the weight of the caviar. The caviar then sits for ten minutes before it can be packaged. This allows the salt to pull out excess liquid to drain off. 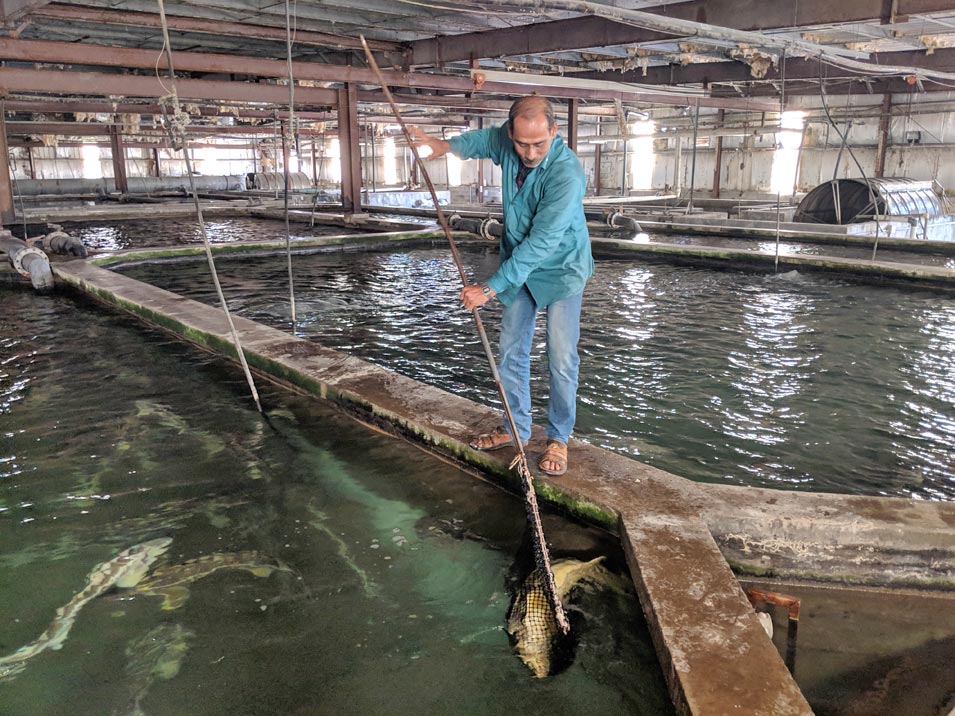 Grading of the caviar comes next. There are three factors that the caviar is graded on. Each element is worth a point. First is the size of the eggs. Eggs between 2.5 -3.0 mm in diameter are given a point. The other factors are the "pop" and the taste. If the eggs pop well between your tongue and the roof of your mouth, they get a point. The taste can also be a point, or not, since taste must be fresh and pure with no after-taste. The caviar is sorted into two grades.  PREMIUM has mid-sized eggs with color varying from black to dark brown while Imperial has large eggs with color varying from dark green to light brown with a golden effect. Each tin will get a color dot that indicates what grade of caviar is in the tin. Even though color can vary from golden to black, it has nothing to do with quality and taste. It is purely an esthetic preference.

Caviar Court markets the two grades primarily to airlines, hospitality industry, and various countries in the Eastern hemisphere. Premium starts at $48 for 30 grams (just over one ounce) while Imperial is $60 for the same amount.

After grading, the caviar is ready to be packaged into tins. The tins are overfilled (by a lot) so that when the top is squeezed down, any excess air and liquid will be pushed out. They are then stored at -4º C. The caviar tins must be turned every two days after harvesting and packaging for two weeks. This keeps the natural oils moving through the tin. If it sat upright all the time, the oil would settle to the bottom, which will affect the quality of the caviar sitting in the oils and the top half without the oil.

While wild caviar sturgeon may continue to decline, the availability of caviar has been on a steady increase due to the advances of aquaculture. Caviar Court plans to continue to expand its operations in the future, making caviar more affordable and accessible to the general public.