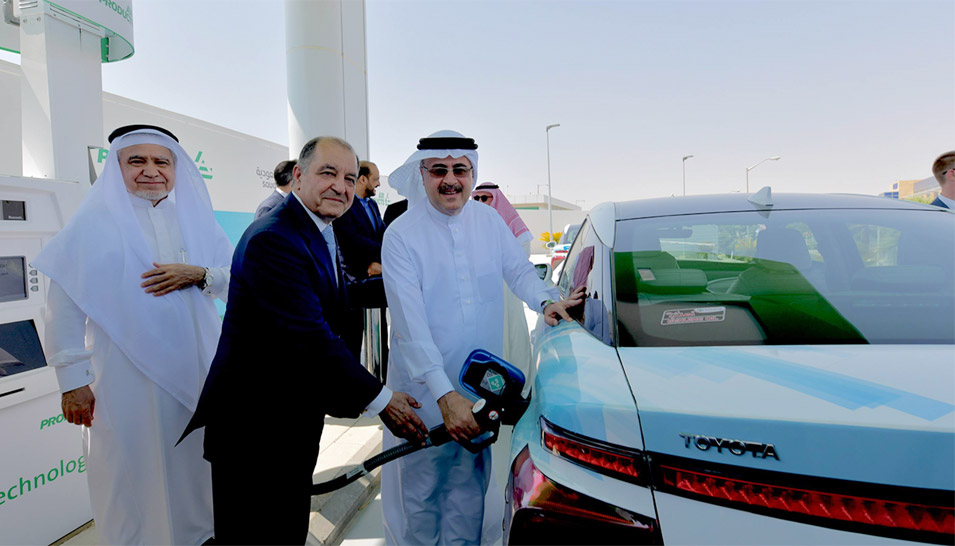 The announcement comes amid growing international recognition of hydrogen’s benefits. A report released last week by the International Energy Agency (IEA) concludes that hydrogen has vast potential to help the world reduce emissions while addressing its energy needs.

“This pilot project represents an exciting opportunity for Saudi Aramco and Air Products to demonstrate the potential of hydrogen in the transport sector and its viability as a sustainable fuel for the future,” said Amin H. Nasser, President and Chief Executive Officer of Saudi Aramco. “Today’s milestone is an important step in making oil-to-hydrogen a reality as Saudi Aramco continues to be focused on creating breakthrough technologies and solutions as part of our long term efforts to reduce carbon emissions and address climate concerns.”

“It is well known that our world needs a sustainable system to address environmental challenges while also meeting growing energy demand. Hydrogen and fuel cell technologies are well positioned to be part of the solution,” said Seifi Ghasemi, Air Products’ Chairman, President and CEO. “We are honored to collaborate with Saudi Aramco to establish and develop a sustainable, hydrocarbon-based hydrogen supply system for fuel cell vehicles in Saudi Arabia.”

The new fueling station combines Saudi Aramco’s industrial and technological experience with Air Products’ know-how and experience in the field of hydrogen fueling.
Air Products’ proprietary SmartFuel® hydrogen fueling technology will be incorporated into the new station to supply Toyota Mirai Fuel Cell Vehicles with compressed hydrogen. The data collected during the initial phase of this project will provide valuable information for the assessment of future applications of this emerging and diverse transport technology in the local environment.

It is expected that the fleet of Toyota Mirai vehicles will have a driving range of 500km with water as their only emission and the ability to be fueled in five minutes as opposed to an hour for traditional battery electric vehicles. This would demonstrate the potential of hydrogen fueled vehicles to make a significant contribution to a clean, secure, and affordable energy future.