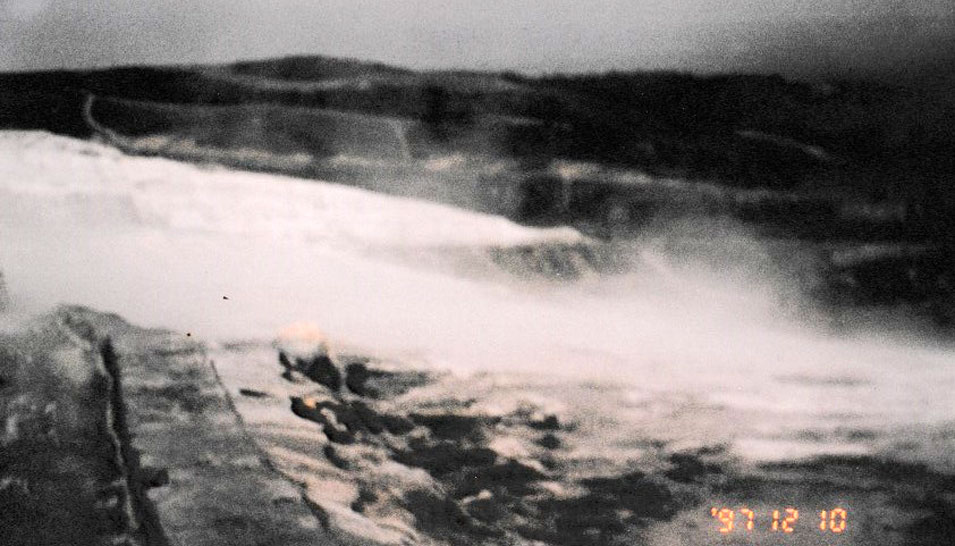 At the Turkish border we are met by the usual hoard of ‘company men’, but we are feeling much surer of ourselves here, now that we are out of the Arab world and demanded, loudly and repeatedly, to meet with the official customs officials. This causes some confusion and I end up with the police who demand our passports. I do not know what they want and become concerned when the policeman puts my Canadian passport in a drawer and sends me to the bank with Noinin’s Irish passport. After a lot of hand waving, it turns out that everything is fine and it is explained that for Canadian passports Turkish visas are free but Irish passport holders have to buy visas for five pounds sterling, and it has to be paid in sterling, which could be embarrassing for the Irish. We have no idea why visas are processed in this manner but there must be some history. As Turkey is not an Arabic-speaking country, I feel safe to produce my photocopy of the blue-colored Saudi vehicle registration book and claim it is the real thing. This, plus my international insurance and two pleasant customs men who claimed to know all about Ireland -- mainly Belfast -- from BBC news reports of the “troubles,” helped our process into Turkey. The customs men are very helpful, with lots of friendly advice to visit Belfast, a place they believe to be very interesting. There is a lot of news of killings in Belfast at this time, but it is pleasant to deal with happy helpful people who are working to a system. No additional money is requested as the Land Rover Discovery is treated as a tourist vehicle and not imported goods, but a number of hours are wasted in processing papers and finding people. The Turkish bank at the border changes Syrian pounds to Turkish pounds at a terrible rate so we change little, a big mistake as the banks in the rest of Turkey refuse to change Syrian money. So, we were and are stuck with Syrian pounds that no one wants.

Thanks to the Syrians, we arrived in Turkey at a different location from where we had planned, so our initial route and schedule in Turkey are messed up. We drive through mountains on a small road to the coast road where traffic is dense and slow. The traffic becomes heavier and slower until it develops into stop/go as darkness closes in. A new motorway is being constructed along the coast, parallel to the road we are on, and as we moved slowly north this major road becomes more complete. As we crawl along, we watch the new motorway with envy and suddenly realize that some traffic is leaving our road, bumping across the dirt and onto the new motorway. So, jamming the Disco into gear, we join the migration across the dirt and onto the six-lane motorway. Once on the new road, we fly along at 140kph.

We are surprised there is so little traffic on the motorway when the old road beside it is packed, then we realize we are on a toll road and the locals do not want to pay the toll. Out of the darkness looms a half-constructed lay-by which we pull into and consume food and tea that we have with us. Then it’s back on the road and zooming along until a toll pay booth appears out of the dark. Pulling up beside the attendant, we listen as he says something and points at a display with a number followed by many zeros. It’s our first experience with Turkish money and we are confused and flustered by all those zeros. After fumbling around in my money belt, I pass over a bunch of bills which a suddenly very happy ticket collector keeps and gives us a big smile. It’s only later that we realize we have parted with ten times too much money.

The excellent motorway takes us passed the town of Dortyol and “around the corner” of the Med, so we are driving west along the north shore of the Mediterranean Sea. We enter Adana, a very busy city with the usual mob of fast traffic. We get lost in the one-way system and heavy traffic, but some helpful, off-duty policemen show us the way to an acceptable '4-star' hotel, the ‘Obl Zaimaglu’, located in the city center. The cost is $85 a night including breakfast. The staff are very helpful and friendly and help me find overnight parking in a multistory public parking lot. We have a brief walk around the city center but are tired after our border experiences and go to bed early.

The next morning, we are on the road after an early, 06:30, continental breakfast in our room, but get lost after ten minutes in the busy city traffic and waste a lot of time. This getting lost in the morning will become a frustrating habit. Once free of the city, we pass through the towns of Tasucu and then Icel (Ncel), where we stop and try, unsuccessfully, to locate a bank that will exchange our money. At the town of Mezitil, the motorway ends and we continue west along the north shore of the Med on a busy, narrow, hilly, but scenic road. We speed through little villages along with the other traffic until, coming out of the town of Erdemil, we are pulled over by the police along with nearly everyone else. The police state that “a silver jeep was doing 95kph in a 50 limit and overtaking cars in the middle of the town”. The police demand my passport and transit documents and stamp them to state we have to pay a fine of TL 3,500,000 before we leave Turkey. When I see the amount of the fine, I go nuts and start to scream and shout, but then Noinin points out that it’s about $15, so that is OK. The problem is how do we pay the fine? We think the policeman says we can pay it at any police station, but we are not sure.

We pass through the towns of Silifke, Tarsus and Bozyazi where we spot a sign for “Police”. We are unsure if we can pay the traffic fine anywhere in Turkey, or does it have to be at a local police station, as in the Arab world? So in an attempt to pay it, we turn off the main road and follow the “Police” signs to a police station located up a long hill on a dirt and stony road. Arriving at the fort-like building, we drive through the gates and talk to a policeman standing at the gate. He is really confused by our request and takes us to his boss. These police are very army-looking, well-armed and tough, and I am sure I am in the wrong place and wish I was elsewhere. The Supervisor is a very pleasant man, amused by our request to pay a traffic fine. He explains that they are the security police and that we needed the traffic police. We said we knew that but just did not know where to find traffic police. He advises us to wait until we get to Istanbul where it will be easier to pay the fine.

We depart the fort, rejoin the main road and reach Anamur, a town on the coast where we stop in the rain and find an out-of-season restaurant. We have a bad meal of fish and beer for an expensive TL 4,700,000 in a wet, cold and gloomy room before continuing along the coast on a twisty road through wild mountains. The drive was spectacular with fruit stands selling local products, but we could not stop as our average speed was not looking too good for that day.

We pass through the towns of Gazipasa, Alanya and Manavgat in spectacular, wild mountains covered in pines with very steep hills on a twisty, coast road to the town of Serik and on to Antalya, a large place where we book into the Hotel Centra in the center of town at a cost of $40 for the night including a parking area for the Discovery. This is a large hotel, well-worn and basic but in a good location for walking around the town. The center, or old part of the town, is Roman and is called ‘Kaleici’ and has some interesting places to visit. There are also ferries that sail directly to Italy.

The following morning, we walk around the town and have tea and bread in a hospital cafe for TL 200,000 ($1) and extra tea at TL 100,000. I try to exchange Syrian and/or Jordanian money in a number of banks but the banks only want western money, so I was forced to change $100 at TL198,000 per dollar. We check out, collect the Land Rover and fill up with 71 liters of diesel at a cost of TL 8,050,000. We drive north out of town and away from the coast along a divided highway towards Burdur. After about 15km, we turn off left to Denizli and then through mountains to Pamukkale and its famous white, calcium, thermal springs. We have a snack of bread, cheese and tea and a look at the springs where some tourists are walking in the hot water of the spring. Noinin, ever the fun person, takes off her socks and boots, which is no mean feat in the cold and wet, and wades in the hot, steaming, spring water. For her troubles, she receives a shouted reprimand from an attendant for going close to the rope barrier at the edge of the white calcium deposits.