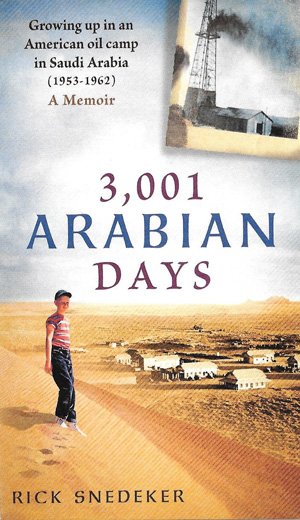 With his recently-published set of colorful recollections, 3,001 Arabian Days: Growing up in an American oil camp in Saudi Arabia (1953-1962), A Memoir, Aramco Brat and annuitant Rick Snedeker (Badge Number 199932) joins a distinguished list of Aramcons who have captured their memories of life in the Kingdom on paper. As the title indicates, Rick focuses on his growing-up years in Dhahran as the son of Albert Coleman Snedeker—known as “Big Al” to his friends—a manager in the Aramco Traffic Department responsible for keeping company camps well-supplied with the foodstuffs and sundry necessities of daily life throughout Aramco’s critical growing-up years in the ’50s and ’60s. As Aramco grew to maturity, so did Rick.

3,001 Arabian Days benefits from Rick’s long career as a word-smith, which included employment as a writer/editor in the English Publications Unit of Saudi Aramco’s Publication Relations Department from 2000 till 2011. As he points out in his book’s “Acknowledgments," capturing one’s personal history just right is no easy task for anyone who has a genuine love for words. On that count, I suspect that Rick must feel a certain kinship to E. L. Lonoff, the chief protagonist in Philip Roth’s The Ghost Writer, when Lonoff declares, “I turn sentences around. That’s my life. I write a sentence and then I turn it around. Then I look at it and I turn it around again. Then I have lunch. Then I come back in and write another sentence. Then I have tea and turn the new sentence around. Then I lie on the sofa and think. Then I get up and throw them out and start from the beginning.” Anyone who wishes to visit what ExPat life was like in Saudi in the ’50s and early ’60s will give thanks to Rick for his diligence and rigorous attention to turning around sentences when penning 3,001 Arabian Days.

Rick’s memoir consists of well over 100 vignettes of life in the Kingdom organized into 32 chapters and accompanied by a wealth of contemporary images. Birthdays, Saudi-Style exemplifies the warmth and incisiveness of his stories:

“A birthday party that taught us a bit about Saudi traditions was one organized by the mother of Dhahran Pirates teammate Saib (pronounced sah-EEB) Naser."

“Of course, as Americans, most of the attendees brought customary gifts, which Mrs. Naser dutifully collected and placed on a table. Later, she distributed one present to each kid, except Saib. I had no idea at the time why she did that. But I sure liked her style. I’ve since learned that events such as birthdays are traditionally not observed by Saudis, partly having to do with the idea that celebrating anything or anyone other than God and the prophet Mohammad is improper."

“Mrs. Naser, I believe, was trying to be tolerant of American customs because she was one of few Saudis living in Dhahran camp at the time and wanted Saib to fit in with his friends. But she likely knew nothing of American birthday protocols. I assume she naturally thought it selfish and unseemly for her son to get all the gifts and his friends none and so she handed them out equitably to balance what to her might have seemed an untenable situation.”

Now retired, Rick lives with his wife Pat Aylward in Mitchell, South Dakota, USA. In a recent email exchange with AXP, he shared some of his thoughts about the Kingdom.

AXP : What attracted you to working for Saudi Aramco in Saudi Arabia?

SNEDEKER : Because I had such a great childhood in Dhahran (1953-1962), I really wanted to return to the kingdom to live and work when I was an adult. I first returned in 1982, working for three years as the Khobar-based Eastern Province Bureau correspondent for Jeddah’s Saudi Gazette. Then, from 1986-89, I was the Riyadh-based Saudi Basic Industries Corp. account supervisor for Burston-Marsteller public affairs agency, New York City. I met my wife, Pat, in Riyadh, where she was working as a dental assistant at King Faisal Specialist Hospital & Research Center. Returning to the states, I worked as a newspaper editor and columnist in Rapid City, SD (Pat’s home state). I very much wanted my wife to experience life in Dhahran and see my old childhood haunts, so we jumped at the chance in 2000 to return to Saudi and work for Saudi Aramco in my old hometown — serendipitously in the same admin office building my dad once worked. We had a fantastic time in Dhahran and enjoyed traveling within the kingdom and around the world. Pat worked as a dental hygienist at the Aramco Dental Clinic. I have been carrying around all my life stories of my boyhood in Dhahran, and for years I collected photos and planned to write a memoir about that special time in my life and in Saudi Arabia’s economic development and America’s role in that. But mostly my memoir turned out to be a coming-of-age story. I retired from Aramco in 2011. 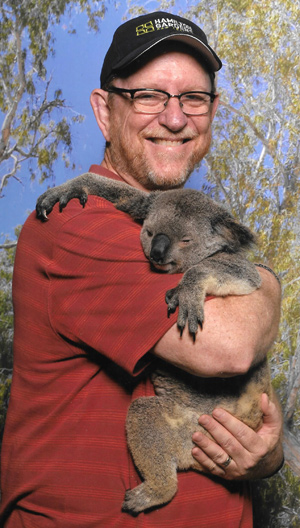 AXP : What is one of your favorite memories of Saudi Arabia?

SNEDEKER : It’s nearly impossible to single out a favorite memory (there were so many), but one of the first images that comes to mind is playing Little League baseball at King’s Road Stadium on a warm April morning, with bright white chalk lines running down the first- and third-base lines into the outfield. I was a catcher on the Dhahran Pirates. Travel is another treasured remembrance from those days. Although I’m a bit traveled-out now, we still vacation hither and yon. The photo of me and a koala was taken in Australia when Pat and I visited Australia and New Zealand with her sister and brother-in-law last year. New Zealand is gorgeous.

AXP : What are some of your favorite hobbies now?

SNEDEKER : Actually, I spend most of my time writing these days at our home along a beautiful, slow-moving creek in rural South Dakota. I write posts for my blog — Godzooks: The Faith in Facts Blog — as well as researching and writing newspaper and magazine articles. Now that my book is published, I spend a lot of time on marketing-related activities. I hope to publish a second book next year that is already written.

AXP : Are you planning on attending any of the upcoming Aramco Reunions?

SNEDEKER : At the moment, I expect to attend the annual Brat Reunion next May in Phoenix, where my brother (also a Brat) lives with his wife near their extended families. In October, I visited the Aramco Annuitants’ Reunion in Austin, TX.

SNEDEKER : When I grew up in Saudi, we always had cats, so I became a cat person. The cat we had in Dhahran in the 2000s, Curiosity, we gave to some friends when we left in 2011, and she recently passed. We had a wonderful, zany cat in South Dakota - Razi - who sadly died about a year or so ago. Currently, we are cat-less. My wife comes from farming folk, who believe the only good pet is an outside pet. But she has kindly humored me over the years and allowed my pampered cats inside.

Rick invites friends and former colleagues among AXP’s readership to reconnect with him via his email, [email protected]; website, ricksnedekerauthor.com; and blog, patheos.com/blogs/godzooks/. To sign-up for periodic updates on 3,001 Arabian Days and other information, subscribe to Rick's newsletter. Click here.