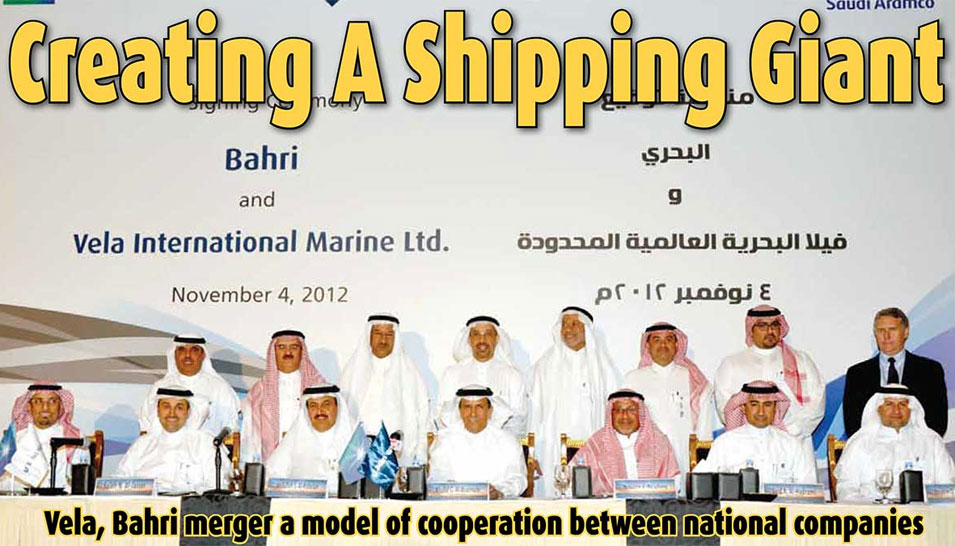 Officials from Saudi Aramco, Vela, and Bahri pose for a photo after the historic signing this week officially merging Vela and Bahri.

Here are a few headlines over the decades from The Arabian Sun and The Sun and Flare. 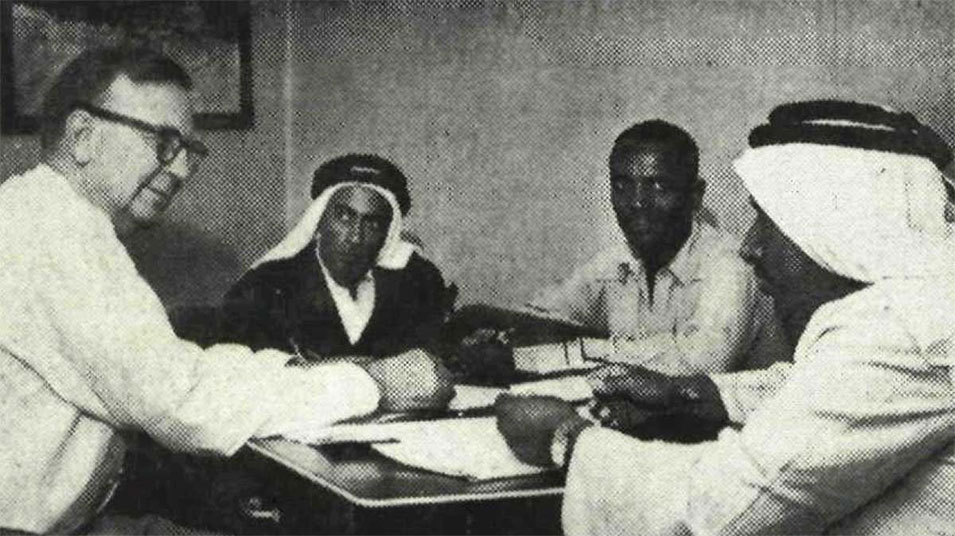 Conferring with A.I.D.D.'s Bill Eltiste are Abdullah Fuad, Ahmad Abhas Shaaban, and Muhammad Dussari, three contractors representative of the 118 employees who are now performing jobs for Aramco. All three are former employees with records of service running from four-and-one-half to 11 years, who have since started their own independent businesses.

During the past 12 months, the number of jobs performed for the company by Saudi contractors has steadily increased.

The amount of money paid to contractors has also increased sharply. It has in fact doubled for the third quarter of this year over that for the same period last year.

All of this is indicative of the increasing industrial development of Saudi Arabia that is taking place along with the development and expansion of oil industry operations. 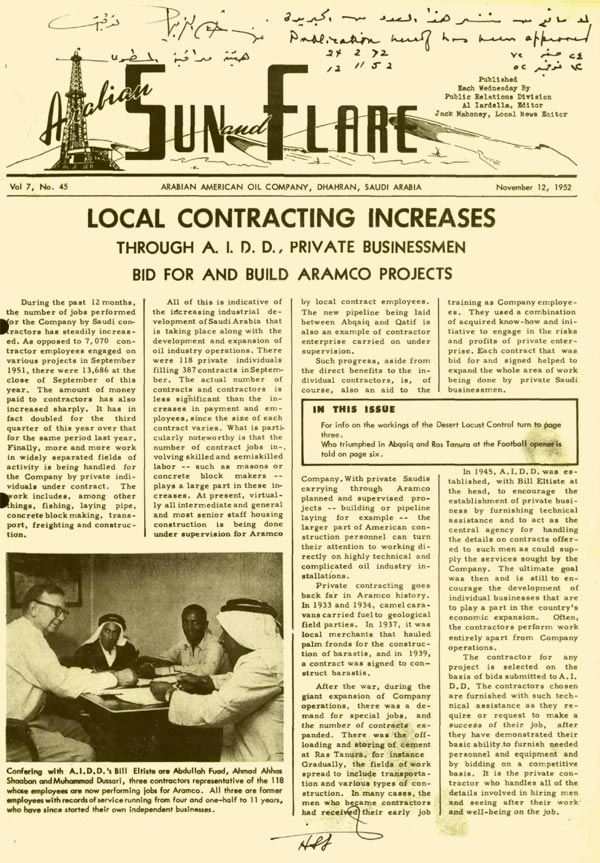 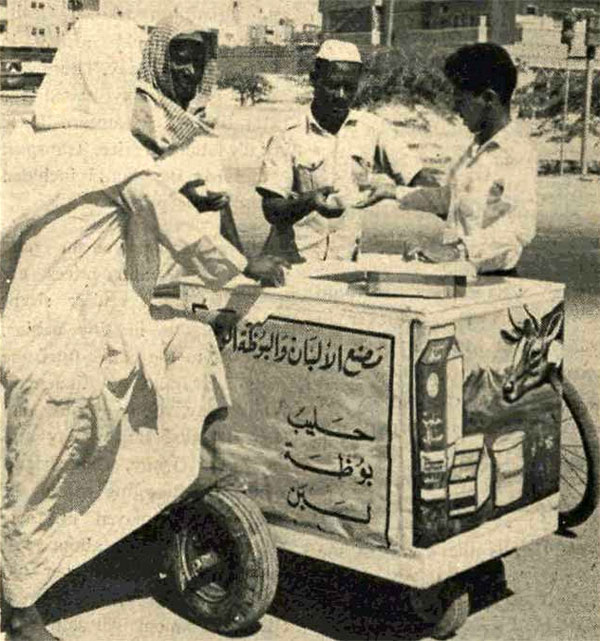 A new innovation has come to al-Khobar with the inauguration of The National Dairy and Ice Cream Company's new, gaily decorated ice cream carts. Here, one of the fleet of carts that are manned by specially uniformed vendors wearing blue caps and white coveralls are pushed through the streets, enabling customers to have easy access to the available dairy products -- various sized containers of milk, chocolate milk, buttermilk, and yogurt, as well as cups of ice cream in chocolate, vanilla, strawberry, and banana flavors.

A new innovation has come to al-Khobar with the inauguration of The National Dairy and Ice Cream Company’s new, gaily decorated ice cream carts.

The National Dairy and Ice Cream Company of al-Khobar, went into production the first week in October and has branches in Rahimah, Qatif, Saihat, Dammam, Hofuf, and al-Khobar. 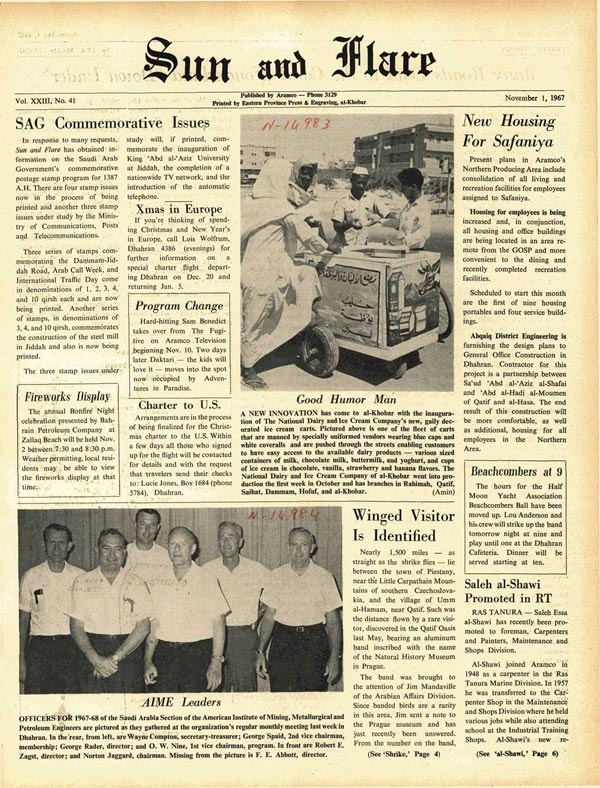 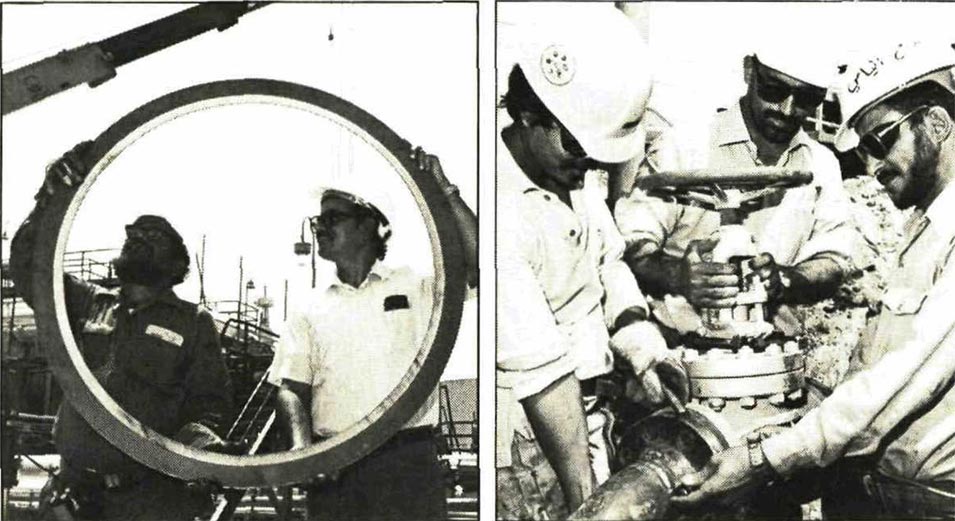 The Berri Plant was the first of the gas plants commissioned as part of the Master Gas System, which now includes installations at Ju’aymah, Shedgum, ‘Uthmaniyah, and Yanbu’.

The purpose of the first total plant T&I was to inspect the towers and vessels internally for damage and corrosion, to carry out the maintenance work that could be done when the total plant was shut down, and to make tie-ins for planned plant expansions. 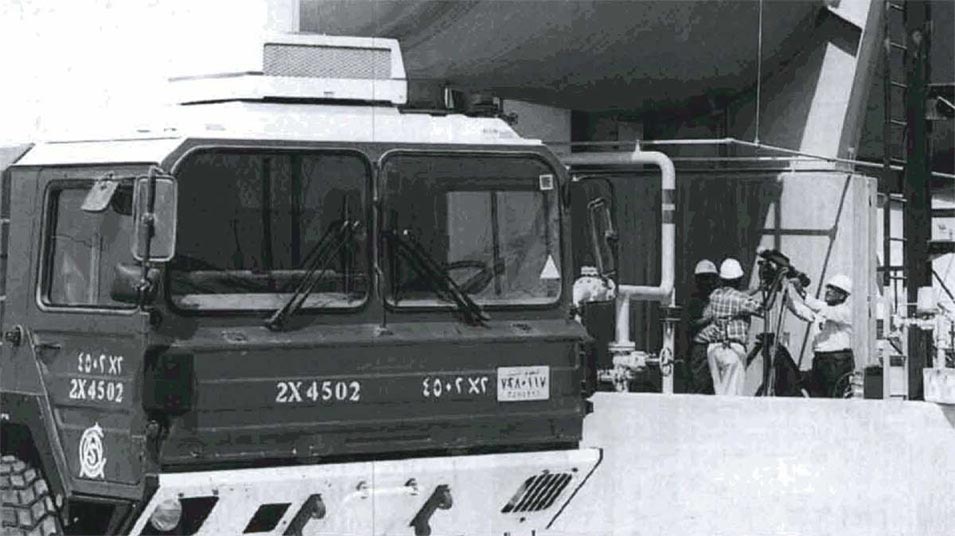 Inspection Department employees adjust the X-ray head of the new mobile accelerator to inspect the concrete base under a vessel during system testing at Qatif GOSP-1. In the foreground is the operations center that powers and controls the linear accelerator and contains digital imaging equipment.

A mobile linear accelerator system that can “see” through 35 centimeters (14 inches) of steel and 100 centimeters (40 inches) of concrete to diagnose facility or equipment problems in the field began field operations last week.

The unique system, housed in a compact, track-mounted operations center, underwent testing by the Inspection Department at Qatif GOSP No. 1, a mothballed gas-oil separator plant. 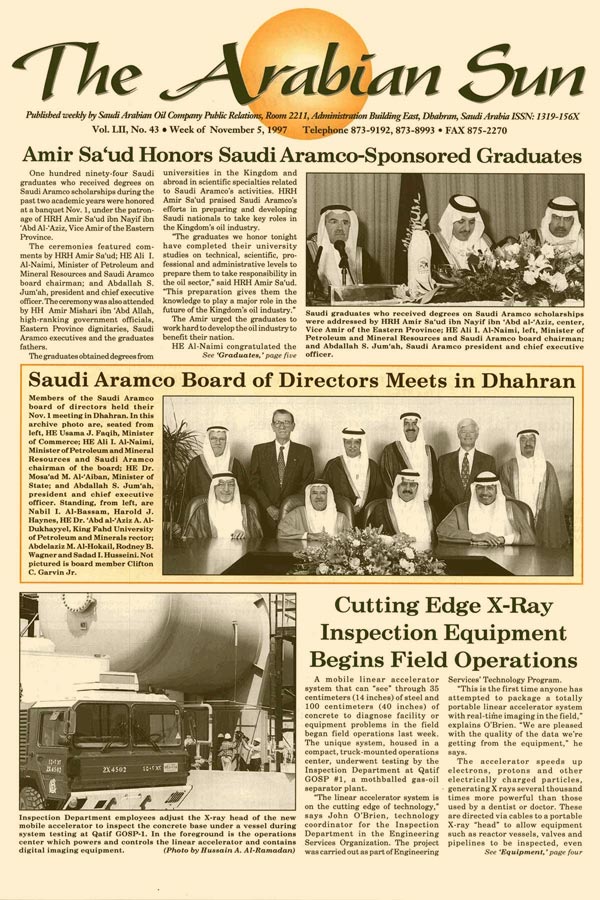 Saudi Aramco and the National Shipping Company of Saudi Arabia (Bahri) signed a final agreement merging the fleets and operations of Bahri and Saudi Aramco’s subsidiary, Vela International Ltd., on Nov. 4, at a Riyadh area hotel. The merger will provide a major contribution to the national economy and serve as an example of cooperation between national companies.

Under this $1.3 billion agreement, Saudi Aramco would transfer its entire Vela fleet — 14 double-hull very large crude carriers (VLCCs), one VLCC used as a floating storage; five refined products carriers; all Vela's ship-based cadres and some of its land-based personnel; and a part of its operations systems — to Bahri, which would then have a 77 vessel fleet.

“I am not exaggerating when I say that this merger represents a living and practice example in which two of the Kingdom’s pioneering companies in commercial success and reputation for excellence in their areas of business join hands to earn the Kingdom a major economic benefit,” said Aramco president and CEO Khalid A. Al-Falih. 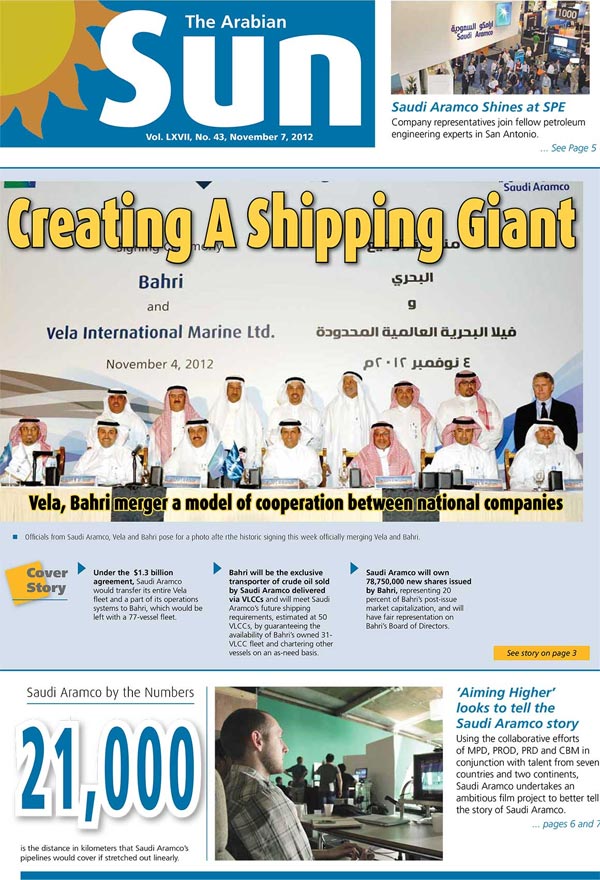