Heritage Gallery offers ‘Window to the Past’ 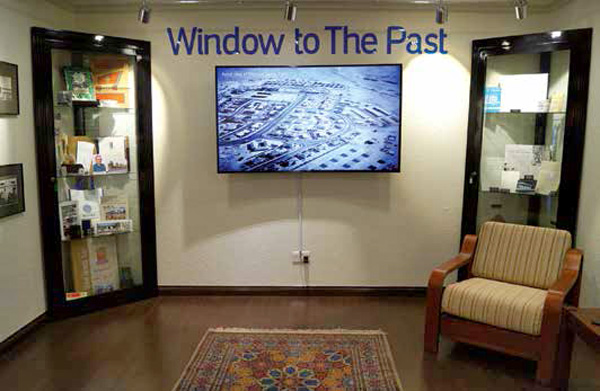 From Dhahran’s humble beginnings to the bustling community it is today, the Heritage Gallery’s
current display ‘Window to the Past’ provides insights into the places and people of the Eastern
Province community over the past eight decades.

Dhahran — “Window to the Past” is the new mini exhibit at the Saudi Aramco Community Heritage Gallery.

The display highlights historic photographs of familiar facilities in Dhahran that we see every day, and that are served by the Community Services Department. Included in the exhibit are objects of historic interest from Recreation, self-directed groups (SDGs), and the residential communities, giving visitors insight into the progress and modernization that has occurred in our communities over the years.

The entrance to the Dhahran Theater looked very different in the 1970s than it looks today. The appearance of Hamilton House and House 19 was also very different back in the 1940s and 1950s, before the extensions and refurbishments took place and the flowers and trees that now surround them were planted.

Did you know that Hamilton House was originally built as a guest house for His Majesty King ‘Abd al-‘Aziz Al Sa’ud for his second visit to Dhahran in 1947? Although the King rested in “The Executive House” (as it was then called), he preferred to stay in the tent city that was established around Dhahran. He felt that he could almost touch the ceiling inside the house and preferred the spacious surrounding of the tent.

On Dec. 23, 1952, the house was renamed Hamilton House in honor of the memory of Lloyd Hamilton, the executive from The Standard Oil Company of California (SoCal) who, together with Sheikh Abdullah bin Sulaiman, the finance minister, negotiated and signed the original concession agreement.

June 29, 1952 marked the opening of Steineke Hall, named after the late Max Steineke, the man most responsible for the discovery of Saudi Arabia’s oil resources. It was Steineke who urged Dammam Dome wildcatters to drill deeper, resulting in the discovery of what is now known as the Saudi Arabian producing zone.

Among other interesting facts, visitors will discover what House 19 was used for, and who lived there before its current purpose. Visitors may be surprised to see the Third Street tennis courts as they were in the 1970s, and how the Saudi Aramco beach was the site of many popular events for employees and their families from as early as the 1950s.

Also on display in the exhibit are facts about SDGs and Recreation. For example, did you know that the Boy Scouts organization was founded here in 1946, and became a member of the Boy Scouts of America in 1947? The Girl Scouts of Dhahran followed and was registered in October 1946. The first troop started with just three girls — Pinky Alexander, Alice Fullmer, and Louise Snyder. Their leader was Miss Mary Leonardi, a teacher at Dhahran School.

The Boy Scouts, Bear Den 18, was one of the first groups to view the exhibit, seeking to learn the history of the place they call home. The visit provided a real understanding of the history and development of Dhahran and other Saudi Aramco communities.

The Community Heritage Gallery first opened in 1992 and serves Saudi Aramco as both a repository and an exhibition arena for historical artifacts, photographs, and documents relating to the growth and development of the company and its communities. It serves as a research facility and an extension to the educational development and interest of visitors through the use of its library and extensive film selection.

Located opposite the residential community library on Ibis street, it is open 9 a.m.-4 p.m. Sunday through Thursday, and 10 a.m. to 4 p.m. on Saturday. For a guided tour, email [email protected] or drop in to visit.