Gary Bain, retired manager of Aramco aviation, is managing a GoFundMe page for his granddaughter Hali who is fighting cancer. He writes the following:

Hello, my name is Gary Bain, Hali's grandfather, and I will be managing Hali's fundraiser. Hali wrote the following story as she is an independent, beautiful, brilliant, sweet, wonderful young woman and no one could tell her story better than her. Please, please share far and wide. She urgently needs help with medical bills, including treatments, surgeries, and hospital stays as well as living expenses. 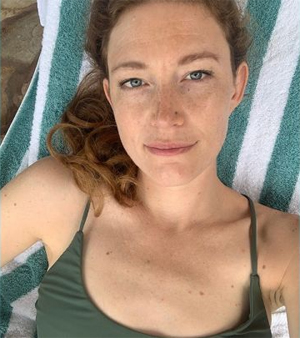 In March of 2020, I visited a dermatologist to have a mole looked at that I was slightly concerned about. The mole was shaved off and sent to be biopsied, but the doctor was doubtful it was going to be a problem.

On March 11th, 2020, I received a call from the doctor informing me that the mole was in fact stage 3B melanoma (meaning a tumor had grown and had made its way into my dermis). I would need to go into surgery as soon as possible to remove the tumor as well as have a few lymph nodes removed to ensure that no tumors had spread any further past the location on my shoulder. I had my surgery on March 20th, right as the country began shutting down because of the pandemic.

A few days later, I received a call from the Melanoma doctor who operated on me. I had small tumors in one of the lymph nodes they removed. My scans showed no other tumors, but I would need to start immunotherapy treatments as soon as it was approved by my insurance. My treatments would be every 3 weeks for a year, and I would need to have CT scans, ultrasounds, and MRIs as well as blood tests and visits with my dermatology, melanoma, and oncology teams every 3-4 months for 2 years to ensure the treatment was working and the cancer wasn’t spreading.

I was told there were some potentially serious side effects from the immunotherapy, including major inflammation to any of my major organs, but that was unlikely.

I had my first treatment at Huntsman Cancer Institute on June 3rd. I didn’t experience any side effects from them except for some slight fatigue after the appointments, which was normal.

On September 1st, as I was leaving a dermatology appointment, I remember sitting down in my car and having an instant sharp headache. I didn’t think anything of it at first, since we all get them, but when it didn’t go away after a few days and pain meds weren’t working, I went up to the hospital to have them check on me.

My bloodwork was normal, and they weren’t keen on doing an MRI just yet, so they sent me home, telling me I was probably just dehydrated and to keep trying over-the-counter pain meds for the headache. When the pain didn’t go away, I went back in on September 4th, and they called for an MRI. I had my blood drawn upwards of 20 times that night, with no changes – everything looked normal...until my MRI came back. A normal pituitary gland usually shows up as a bright white spot on scans, but I had a gray gumball-shaped something instead. I was admitted to the Neuro-acute care at the U of U that night. I was told I had a Rathke’s cleft cyst on my pituitary gland and by Sunday the 6th, I was told I would need to have brain surgery to remove it.

My surgery was on September 8th. It was longer than expected and they found that not only did I have a Rathke’s cleft cyst that was very inflamed, but my pituitary gland was also severely inflamed as well.

I had to do all of this alone. No visitors were allowed in the hospital at the time. No one could come with me to my infusions or my follow-ups, and my mom wasn’t able to come to see me until the day after my brain surgery because of the Covid protocols in place.

The surgery was successful, and I was able to go home by September 10th. My immunotherapy treatments were stopped immediately as they had caused the inflammation to my pituitary gland and I had to start on a course of steroids instead to combat the inflammation in my brain.

I continued having my scans and follow-up appointments, and every time was told the same. My blood work looked great, my scans looked great, I was able to stop the steroids and keep trucking along.

In January, I started having some hip pain. I attributed it to the yoga I had started doing thinking I had made my SI joint angry or pulled something. The pain would come and go, but by the end of February, it wouldn’t go away. I visited two physical therapists, which brought no relief. My mom, who is a massage therapist, worked on my hip as well but when that brought no relief either she suggested I talk to my primary care doctor about it.

I went in and she ordered an x-ray first. The radiologist said my bones looked normal and healthy, so she called for an MRI next. While waiting for my MRI appointment, I would have flair-ups of pain that were so intense I was tempted to go to the ER for help.

I went into the MRI still thinking I had torn something, perhaps my labrum. Maybe I had a herniated disc, but the phone call I received was not what I was expected.

On March 15th, 2021, almost a year to the day that I was first diagnosed with melanoma, I was told it had metastasized, and I had a tumor on my right hip. My doctors immediately jumped into action and called for numerous MRIs, a PET scan, and an appointment with an orthopedic oncologist to figure out how they could help support my hip. I was told that I’m at a very high risk of fracturing the head of my femur. I was also told I’d need to start immunotherapy treatments again, and this time it would be every 3 weeks for the next 2 years.

On Monday the 22nd, I was told I would need a full hip replacement with an extended stem. The surgery is scheduled for April 7th. I’m looking at this as if it was an injury. My bone is injured, and I’m grateful I have a team who can fix my injury.

Unfortunately, I’ve used a lot of my sick leave for 2020. I’m going to need help with medical expenses not covered by insurance and my monthly bills. I’m not going to be able to go back to work for 7+ weeks and that will be limited as well once I do go back.

I am grateful for whatever help can be given.

In the end though, I’m only asking one thing of anyone who reads this…

In situations like mine, it is very easy to become bitter.  But I've learned along the way that life is more manageable with the motto:

Be better, not bitter.

"Gary has been a close friend for more than 30 years. A fellow pilot, Viet Nam vet, devoted family man and just a truly decent human being. Gary has had more than his fair share of grief, having lost his first wife after her very courageous nine-year-long fight against breast cancer. Now his granddaughter is facing a terrible struggle.

"If you find it in your heart to contribute that will be deeply appreciated, but it will be equally appreciated if you just share this appeal with others and, as Hali has asked, please go get checked for skin cancer."