In September 1979, Mark Lowey completed a nearly two-year stint working in the oil fields of the Eastern Province in Saudi Arabia. Together with a colleague, he traveled to Kathmandu and then Pokhara, the gateway to the Himalayas’ Annapurna region in central Nepal.

One morning, while walking along a well-worn footpath high in the Annapurnas, I encountered three Sherpa girls on an errand to collect cattle fodder. These young grass gatherers had stopped to pick armfuls of the tall, wild grass that grew in abundance along the path. Stuffing the grass into loose cloth satchels slung over their shoulders, they would eventually resemble three haystacks with legs. The girls would then carry their hefty bundles back to their homes.

But, first, they had a question for me.

As we crossed paths, the three girls paused. “Halo, meetai?” they boldly asked me more than once. I knew what they meant. I had come to know what local children were after and kept a supply of individually wrapped hard candy in my day pack.

In exchange for a few pieces of the candy, they agreed to pose for a photograph. Their charming smiles have brightened my days ever since. 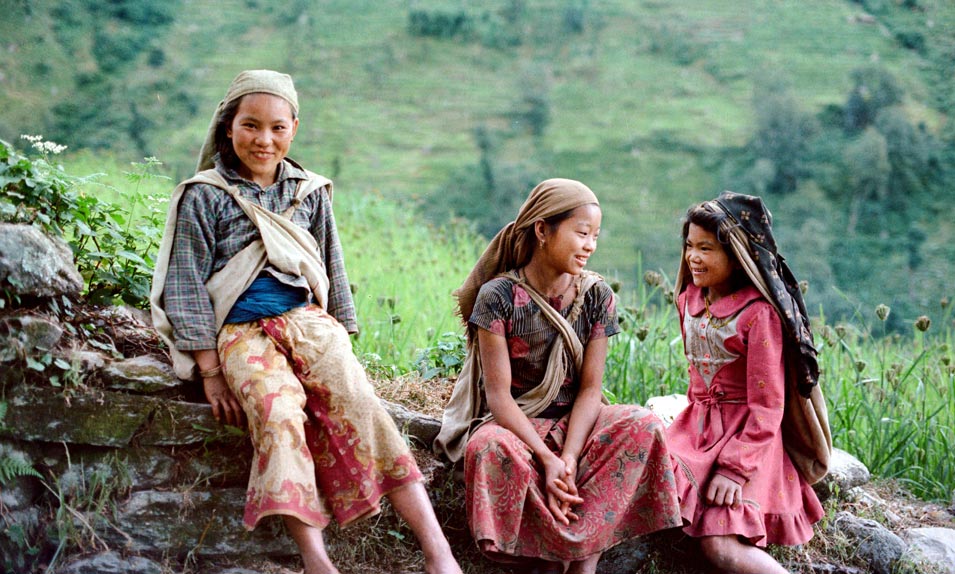 In 1978 and 1979 my colleague, Jim Sides, and I worked for a construction contractor in Aramco’s oil and gas facilities outside of Abqaiq, Saudi Arabia. Anxious to see the world, we coordinated our end-of-contract departure dates and planned a six-day trek in the Himalayas. We flew to Kathmandu and, after two or three days of sightseeing, boarded a bus for a four-hour journey to the central Nepali town of Pokhara.

Stranded in The Countryside

Our bus was full of local passengers, a few goats and chickens, a handful of young tourists and the packages and luggage were tied down on the roof. One hour out of Kathmandu we broke down on the desolate mountain road. We all disembarked and waited on the roadside. There was no traffic in either direction until one bus, going the opposite direction towards Kathmandu, slowed long enough to rubberneck, then let out a sharp toot-toot with its air horn as it rumbled by without stopping. Time passed, a man leading a donkey wandered by but showed little interest in our predicament. Some distance away a crew of dusty laborers struggled to clear the road from rockslide debris – a common occurrence, I came to understand. 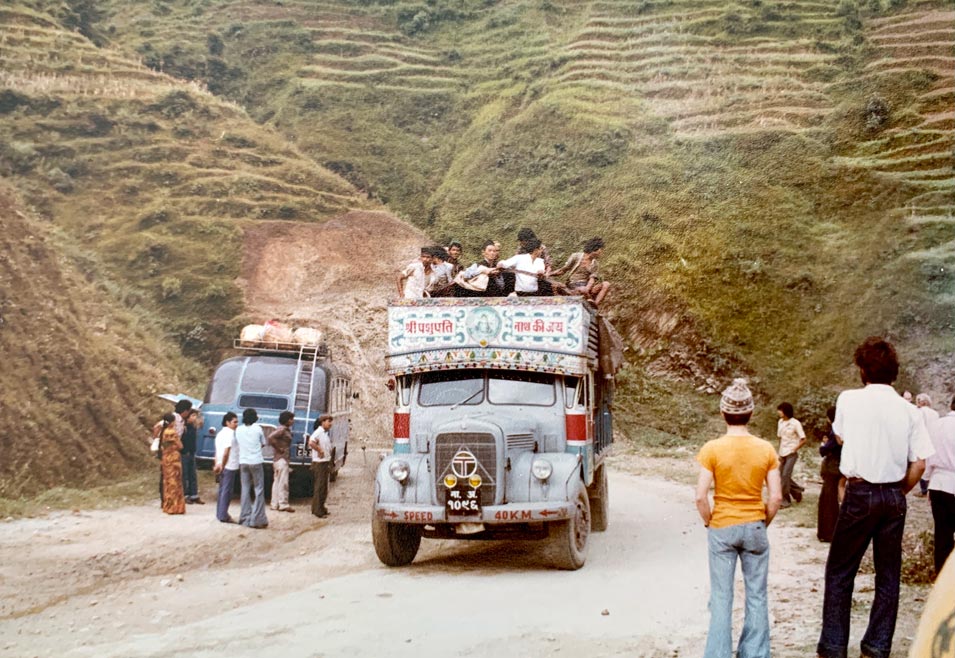 The Kathmandu-bound bus. Our broken-down bus at left.

Three hours later, the next bus to Pokhara came into view and lurched to a stop beside us. It, too, was full to capacity. There was no alternative but to climb onto the roof, where I found a few Nepalis and a small group of western tourists enjoying the mountain views and looking forward to arriving in Pokhara.

One, a spry, compact, redheaded Scotsman, took one look at me, and my 6’ 4” frame, as I scrambled atop the bus and said with a welcoming smile, “Hey, Stretch! How’re you doing?” Generously making space for me where there seemed to be none, Donald Barry would become a dear, life-long friend. But that’s another story. 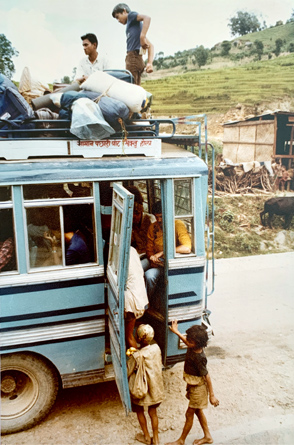 Boarding the already-full bus to Pokhara. Jim, in yellow shirt, grabbed the last seat near the door. 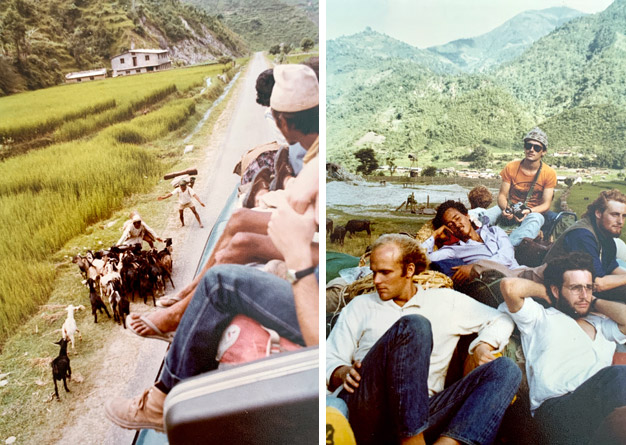 We arrived at the Pokhara bus station after dark and checked into a simple guest house near Lake Phewa on the city’s western edge. Early the next morning, before first light, I stumbled to the outhouse. Returning to the house’s back entrance, I looked up and was awestruck by my first glimpse of the Himalayas, the snowy, pointed peak of Machapuchare glowing in the clear, starlit sky. So close and so high! 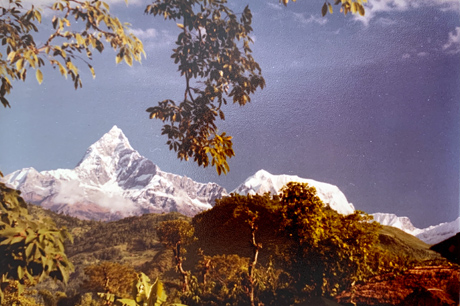 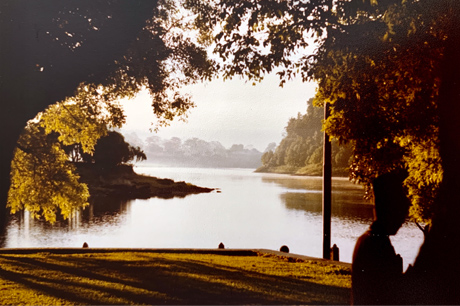 That day, Jim and I had an appointment with the Sherpa Society, a touring agency catering to budget-minded trekkers. They recommended a six-day, mid-elevation itinerary that would include all the necessary food, cooking equipment, tents, sleeping bags and a support team of six Sherpas, well-known for their mountaineering expertise. We needed only to carry a small backpack and a camera. The cost? USD $10 per day, per person, including meals.

We set off, accompanied by our English-speaking guide, Mr. Ang-Tshering, the cook and four porters – two young men and two teenage girls. The sure-footed porters carried all the gear in large baskets on their backs. The male porters were barefoot, and the girls wore plastic flip flops.

Our trek began on the Jomoson trail, just outside of Pokhara. For an hour or two that day, we walked, barefoot, in the sandy, clay-bottomed river. 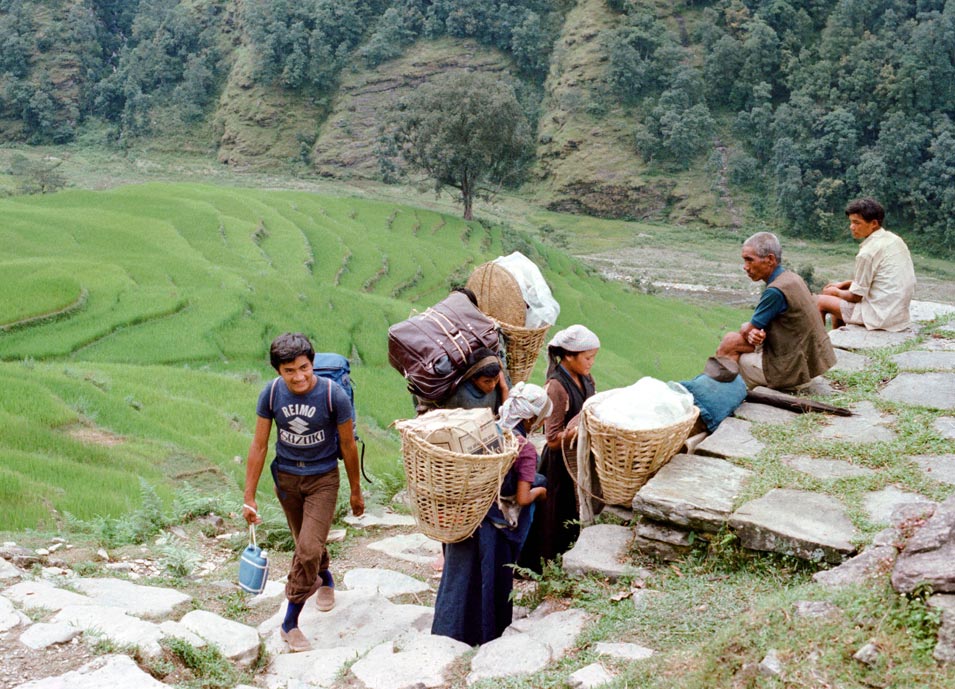 Ang-Tshering, in blue T-shirt, and the porters take a break as locals look on.

Along a winding, up-and-down loop, we hiked from one mountainside village to the next, spending evenings in traditional tea houses where we met fellow trekkers and locals alike. At night we camped in one-man tents, set up by our porters, on the villages’ outskirts. We were awakened at dawn and served sweet tea and a hot breakfast of omelets and toast, prepared by our cook.

There are no roads here, only well-worn earthen tracks and steep, jagged stone steps, unnavigable by wheeled vehicles. As we proceeded along our route, Jim and I occasionally had to stand aside to avoid donkey trains or traveling goat herds. We watched, awestruck, as sturdy, and agile Sherpa men and women carried heavy parcels and cargo on their backs. Stooped over, they supported their loads by slinging stout straps under the load and over their forehead. They strode past us, undeterred. 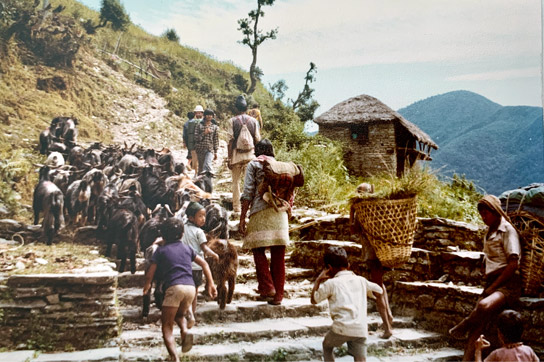 Children chase a flock of sheep up the steps. 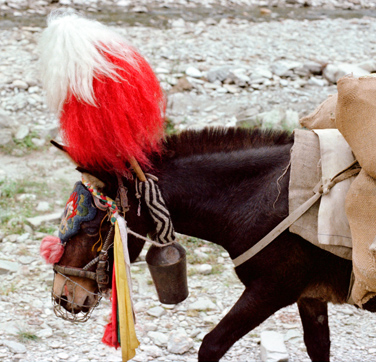 One afternoon near a small village, we set up our campsite a few hours before sunset. In cutoff jeans and flip flops, I climbed up to a lookout point above the terraced rice paddies to relax. I was somewhat bemused to find a plump, black leech attached to the top of my foot. I flicked it off. A little spot of blood appeared, and I thought no more of it. I leaned back and took in the magnificent view of the valley – it was a little piece of paradise. Then I found another leech on my neck! Thankfully, a thorough inspection yielded no further findings.

The valley view and the leech bite.

Sights, Sounds and an Ice-cold Plunge

Around every bend in the road a pleasant surprise awaited us. Laughing children, talking birds, a narrow footbridge not for the faint of heart, and a refreshing waterfall to cap a daylong trek. 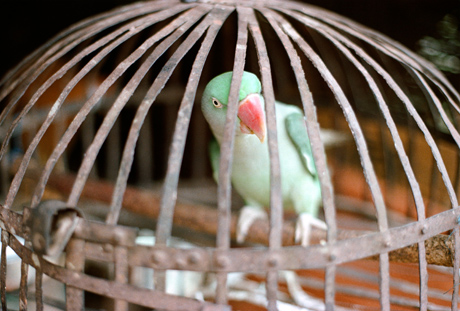 The parrot of Naudanda village speaks only Nepali. 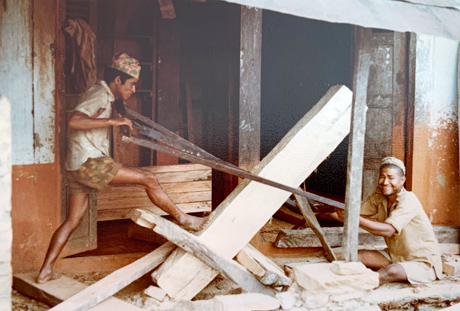 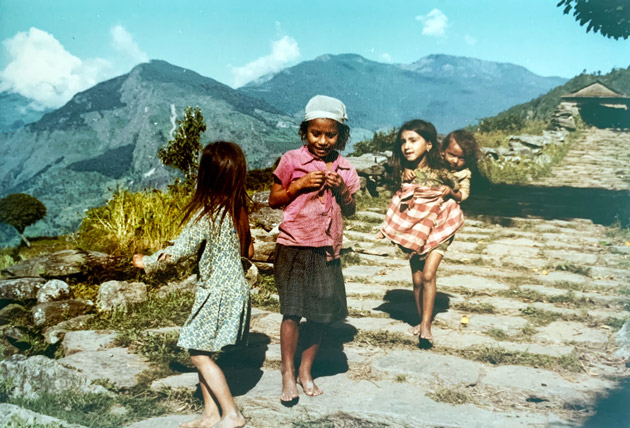 Children join us on the road. 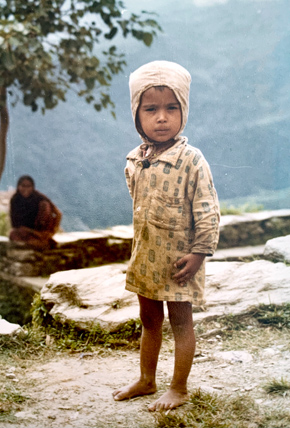 A brave little soul, and a watchful mother in the background. 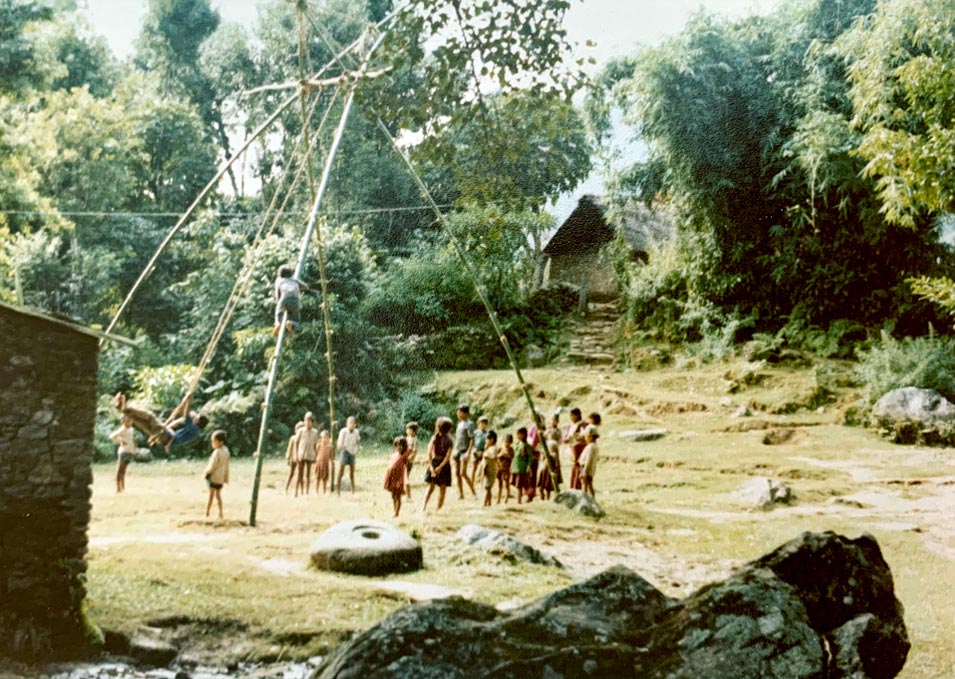 Children of all cultures love a swing set. This one made of bamboo. 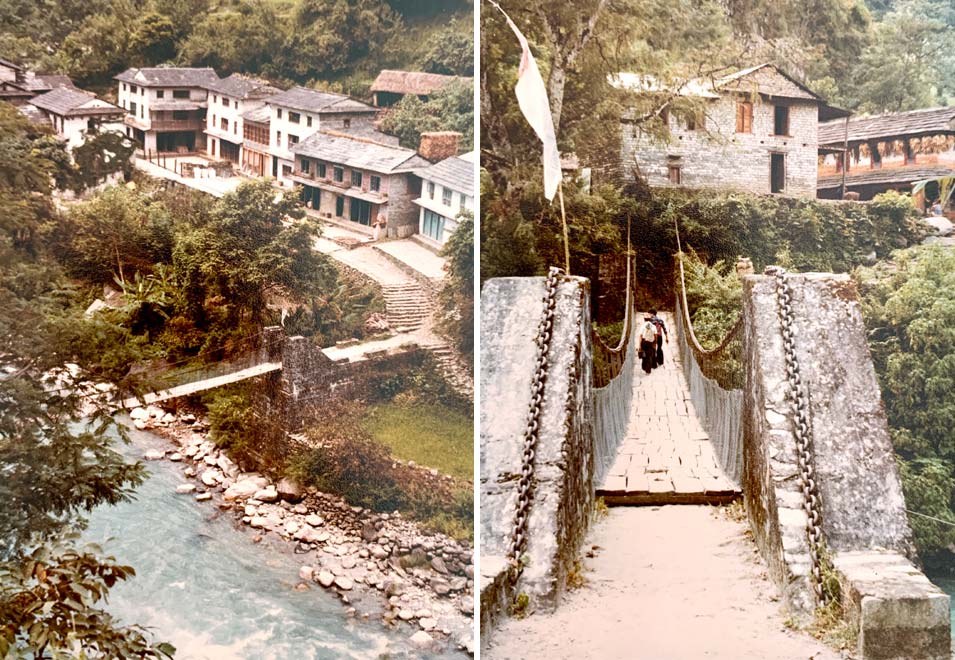 A suspension bridge spans the river at Birethani village. 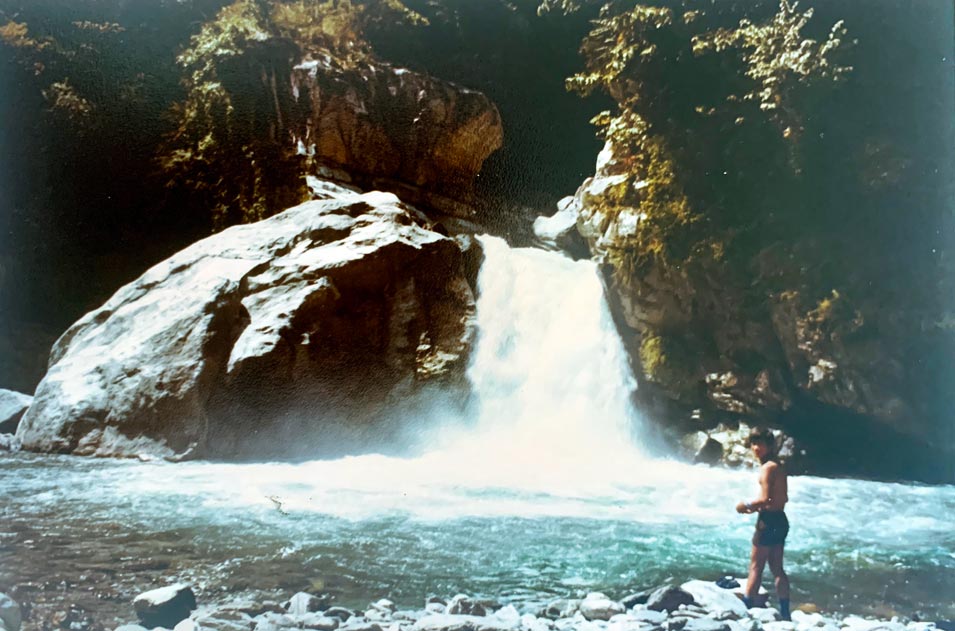 A refreshing swim after a hot day of trekking.

Four days in, our food supply had diminished, lightening our load, so the two girl porters were no longer needed. Before they went on their way back to their nearby home village, I requested a photo with me. 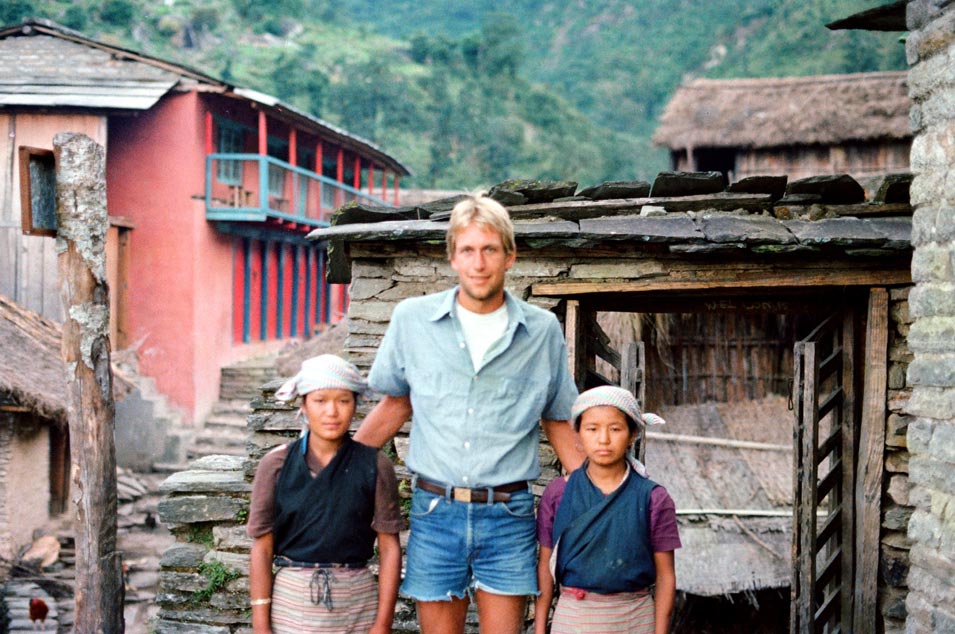 Goodbye to the Sherpa porters.

One of the trip’s highlights was the morning climb up to the Poon Hill lookout, a hill station overlooking the Annapurna Range. We spent the night in Ghorepani village and began our ascent at sunrise. Guided by Ang-Tschering, Jim and I were rewarded with spectacular views. I brought my mini-tripod, and we posed for a few timed self-portraits.

Historically, the Annapurna peaks have been among the world's most treacherous mountains to climb. The steep south face of Annapurna I Main – a wall of rock that rises 3,000 meters (9,800 feet) – is one of the most difficult climbs in the world. [1] 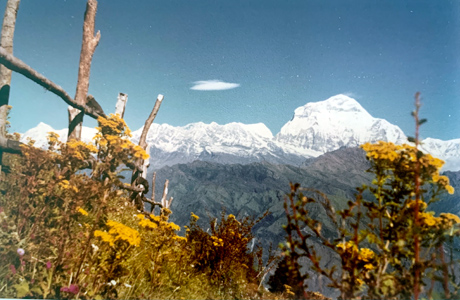 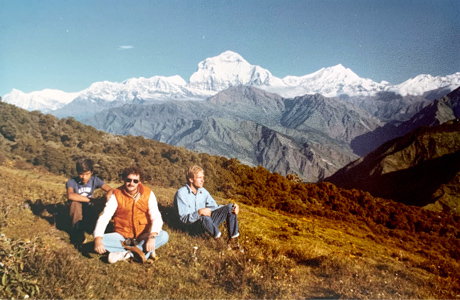 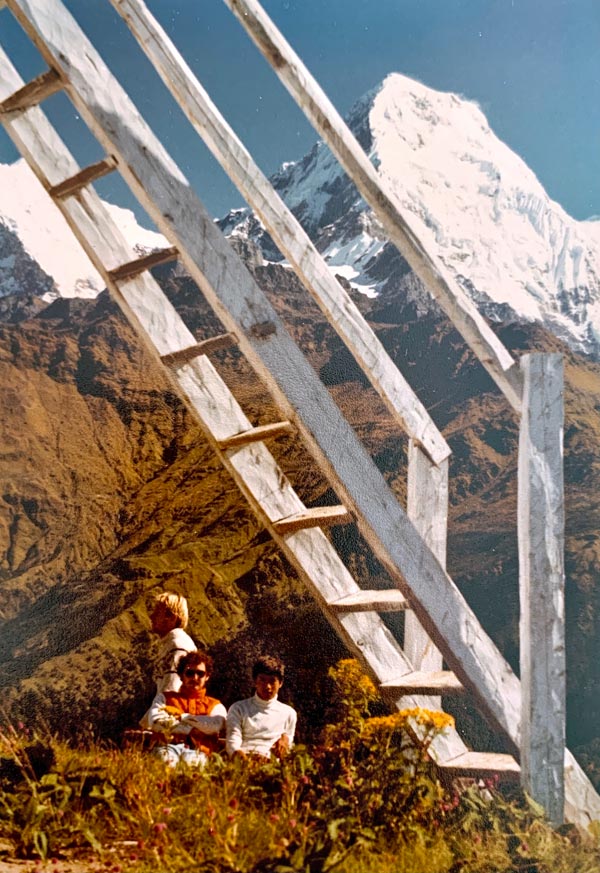 Ang-Tshering, Jim and Mark at the Poon Hill lookout 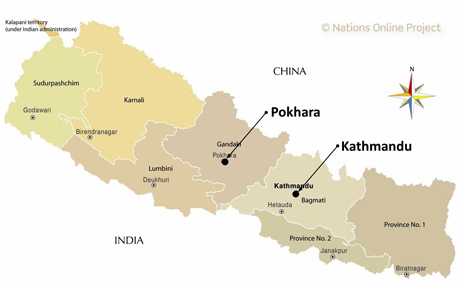 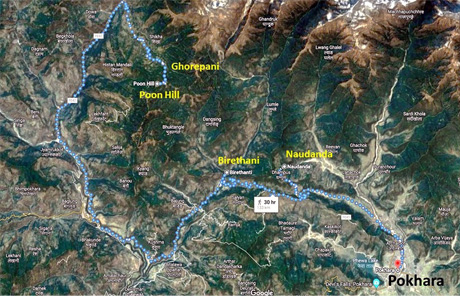 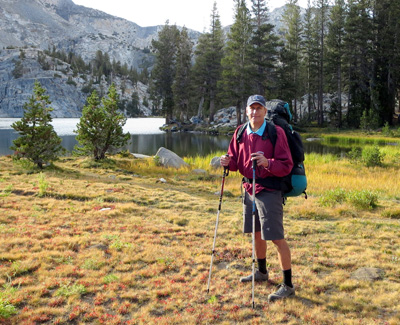 Trekking in the California Sierras.