From Aruba to the Red Sea and Back 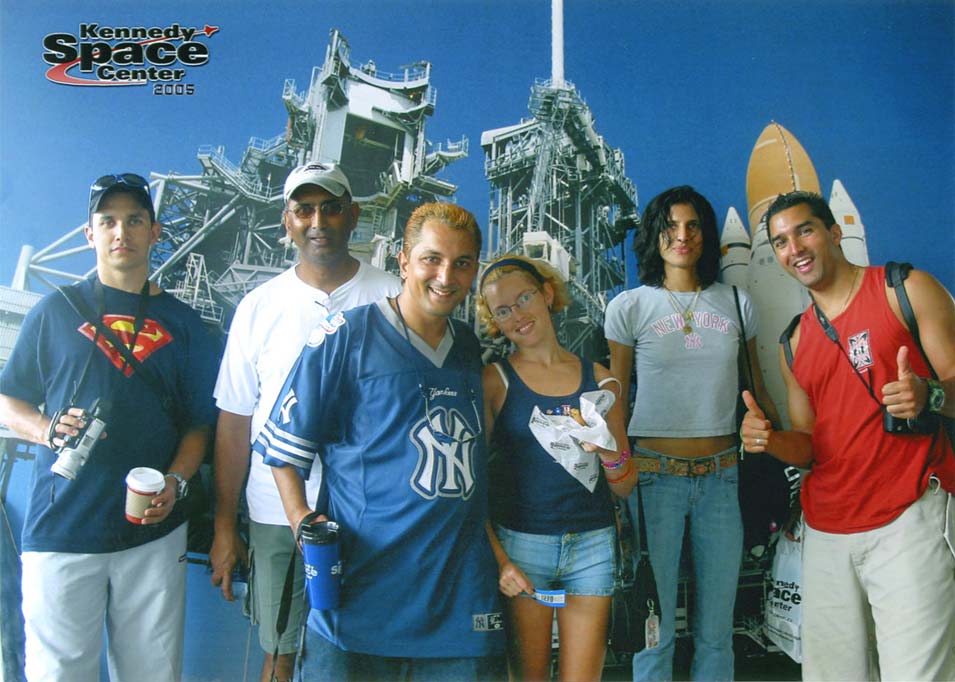 2005 Family Repat and a Visit to the Kennedy Space Center

“Those of us who have survived the Saudi Aramco experience without needing therapy all have fantastic tales to tell.” So, in good humor, wrote Everard (Eddy) Edoo, Badge Number 168957, in a recent email to Aramco ExPats. Eddy worked as a Field Supervisor in the Projects Inspection Division from 2002 to 2012, living in the Najmah compound in Ras Tanura. Based on the number of quality stories he shared with us, Eddy is living proof of the above claim.

A native of the Caribbean island of Aruba, Eddy knew a thing or two about scuba diving long before he got a fateful phone call at 11:30 p.m. in the evening on March 2002 while working on a project in England. On the line was a head-hunter in Melbourne, Australia, where it was already 11:30 a.m.in the morning the next day.

“He told me,” Eddy writes, “that Saudi Aramco had my CV and wanted to interview me by way of a video conference call. Just getting ready for bed at that moment, the only thing running through my mind was diving the Red Sea. You either have to be a resident of the Kingdom or on a pilgrimage to Mecca to get access to those waters. A week later we had that video conference.”

And the rest, as the saying goes, is history.

“Every month or so,” he recounts, “and with not another soul to be seen, we dove the Red Sea from a live-aboard for the whole weekend. I was always filled with a deep sense of gratitude at such moments, for money cannot buy opportunities like those. Our group typically included three generations of Aramco brats, some of whom lived opposite Tim Barger. We’re talking Standard Oil history here when we mention the name Barger! We did stuff Jacques Cousteau could never have dreamt of and in the process became friends for life."

“During Eid al-Adha in November 2011, we spent nine days up near the Gulf of Aqaba. This had been planned a year in advance, with a block of twenty-plus seats booked on Saudia. Then, at the last minute, we got bumped. One of the second generation brats with us had the ‘wasta’ to get nineteen of us booked on Aramco Aviation flights to Jeddah in two separate batches."

"During my ten years in the Kingdom, my son Louis and daughter Roxanne often vacationed with me in Najmah–Ras Tanura. I took them on several trips to Jeddah, but each time I did the Saudi Coast Guard prohibited us going on to the Red Sea due to severe stormy weather."

“The 2011 Eid fell in the middle of the week, and by bridging both weekends together we planned for nine days of diving in the Red Sea. Louis scheduled his vacation from work that year especially to come to Arabia for those nine days. His Saudia flight reservation was bumped, and as he wasn’t a dependent, he couldn’t fly with Aramco. In order to get him to Jeddah, I booked a taxi with Majestic and had them drive the two of us all the way to Jeddah. It took exactly fourteen hours to travel by car across Saudi Arabia. We arrived just in time to meet the first members of our group as they arrived at the airport in Jeddah. On the trip back, we managed to get Louis aboard an Aramco Aviation flight for the return leg from Yanbu to Dhahran using his Saudi Aramco Community ID Card." 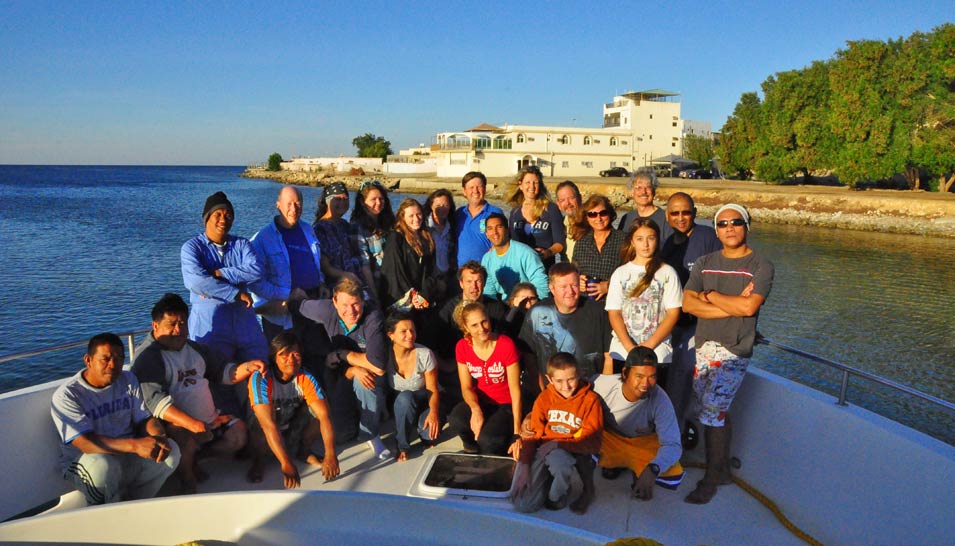 “I have a photograph I treasure taken on that trip (see above). It shows our dive group—such lovely, lovely people—aboard the vessel Dream Voyager at Al Waj, north of Yanbu. My son Louis is in the middle wearing a light blue sweatshirt. I’m on the right behind Kalista’s left shoulder. Her dad, James Vandervyver, is the very special person who organized our trips. An enlarged print of this same picture hangs in pride of place at my home in Aruba, and another, also in pride of place, hangs in my apartment in England, along with my Saudi Aramco 2012 retiree gift—a mural from Desert Designs—and pictures of the beach at Najmah–Ras Tanura. The people to whom I leased my apartment in England when I relocated to Aruba requested that I leave everything exactly ‘as is.’ It seems those images had a dramatic effect.”

Like many annuitants, Eddy has warm memories of Christmases in the Kingdom.

“Every December 24th a candle-light midnight mass was held in Ras Tanura. The solo performances were something very special, like hearing angels sing, and “Silent Night” was hard to beat. My daughter Roxanne, who passed away last year at age 36, was confirmed at the Najmah RC at age 25. Her dream was to have her church wedding in England conducted by our priest from Najmah, someone who was very dear to our family’s heart. And what do you know, he scheduled his 2009 repat in order to layover in London and preside at her wedding! I flew in the day before from KSA, collected him at Heathrow, drove him down to Bournemouth, and checked him into his hotel. Amazingly, we got to the church only one or two minutes late. That was a day to remember. If there’s such a thing as reincarnation, it couldn’t possibly top that!” 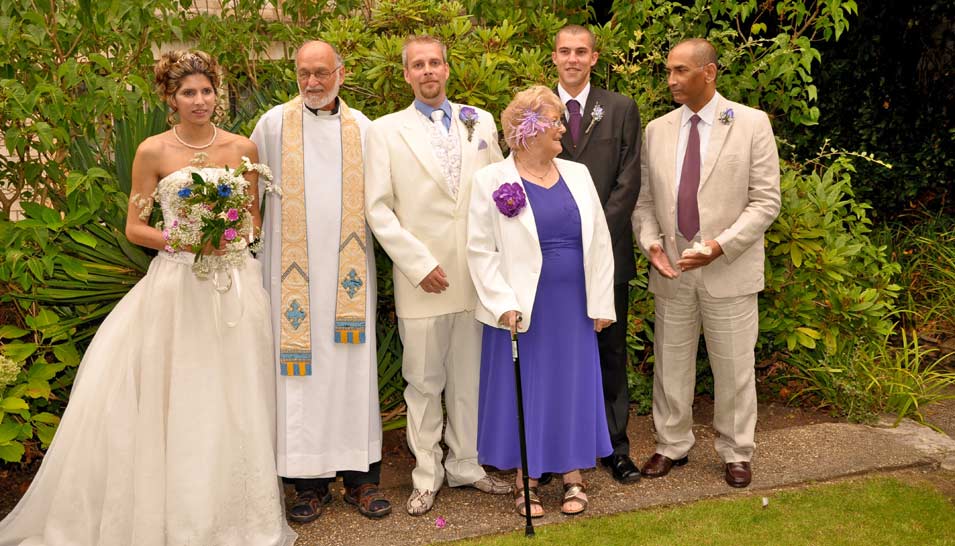 Eddy remembers a humorous story about an expat who was stopped and searched at one of the police checkpoints along the Dhahran–Jubail highway. “After that, when he was stopped at another police checkpoint approaching RT,” he writes, “they found an automatic machine gun in the back seat. It seems that the policeman who conducted the first search left his shooter in the poor guy’s car. God alone knows how he explained his way out of that predicament!”

Eddy relates another amusing story dating from post 9/11, “when security around the compounds became an end unto itself. After a series of staggered concrete blocks on the approach to Najmah–RT, they installed a kind of hydraulic drawbridge. Our pal was riding in a company shuttle taxi. Just as they were crossing the drawbridge, someone in security hit the wrong button, raising the bridge and catapulting my pal into the taxi’s roof, injuring his head. He was most upset, but I couldn’t keep a straight face listening to him tell his story. In fact, I’m cracking up as I write these words. Another pal of mine was stopped for speeding while leaving Dhahran. They were going to lock him up for the mandatory three days, but had to let him go because he was too big and fat to fit in the back of the police car.”

When not telling tall tales of life in the Kingdom, Eddy keeps himself busy these days in retirement putting the finishing touches on his home in Aruba. He writes that he can see the “light at the end of the tunnel. That can’t be a train coming, as the only train on Aruba is the Cruise Liner day tripper sightseeing tram!”

Eddy has plans to visit a fellow Aramco retiree living in West Virginia later this year, where he intends to take in the famous Shenandoah National Park.

“Does anyone except me remember the ’60s black-and-white television show ‘Shenandoah’ starring Robert Horton? Well, it caught my thirteen-year-old imagination. After West Virginia, I plan to head back to Brazil and walk some more of the thousands of kilometers of golden beaches there. I was about to paraglide around the Cristo Redentor statue in Rio de Janeiro last year, but the weather was against me. Wouldn’t you agree, that’s a good excuse to go back?”

At some future date, Eddy hopes to attend an Aramco reunion. In the meantime, he plans to stay in touch with other Aramco retirees in the U.S. and see them individually from time to time. He notes that Miami is only four hours from Aruba by plane.

“Working for the Saudi Aramco Inspection Department was the pinnacle of my professional career,” Eddy says. “The level of expertise and availability of resources found there is world class and second to none. Those of us fortunate to have that experience never want to work any other way. That’s my feeling, anyway. And I’m sure that other Aramcons feel the same way."

“I’m enjoying the fruits of my labor back where I was born, Aruba. I was born in Lago Hospital, Lago Oil & Transport Co. Ltd., originally Standard Oil of New Jersey, then Esso, and finally Exxon. I guess Standard Oil (Socal, Chevron Texaco, Exxon Mobile, Saudi Aramco, etc., etc., etc.) is in my DNA.”

Eddy has one last piece of advice for our readers: “Life is an adventure! Grab it while you can. Self-sufficiency and financial security are myths. Just trust in the Good Lord.”