A tasteful sojourn in the ‘windy city’ of Baku. 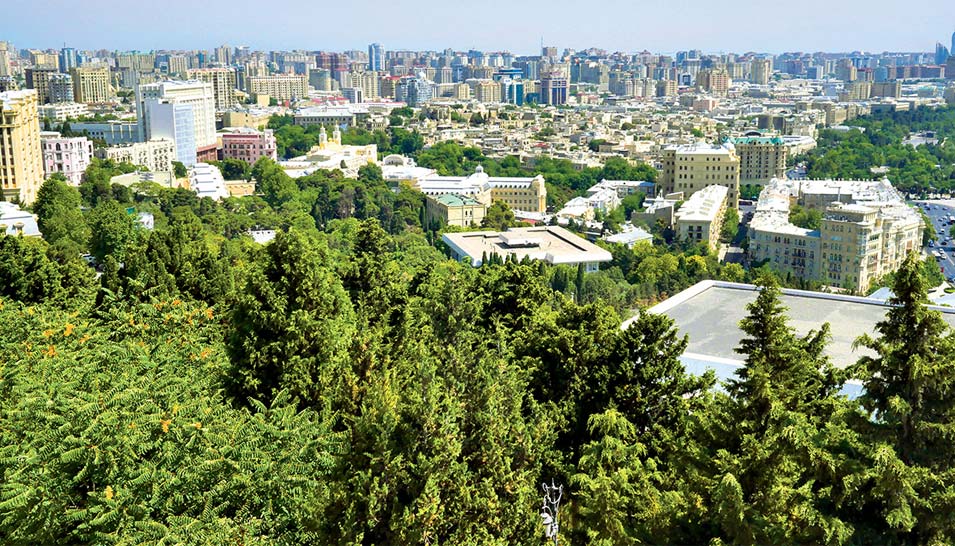 After a four-hour flight, we began our descent over the southeastern peaks of the Caucasus mountain range toward the ancient silk road city of Baku. My family and I had taken a direct flight from Dammam to experience the peaceful Azerbaijani capital on the dry and rocky Absheron peninsula, which juts out into the mineral-rich waters of the western Caspian Sea. This sea is the world’s largest inland body of water, and is shared by five countries: Azerbaijan, Kazakhstan, Turkmenistan, Iran, and Russia.

Baku is a key commercial hub for the economy of the Caspian region and is home to approximately a quarter of Azerbaijan’s population. Much of Baku’s wealth derives from Azerbaijan’s oil and gas industry, which has been developed in the modern era since the country built its first oil refinery in 1859. But oil has been produced on the Absheron peninsula for centuries. Indeed, the Venetian merchant-explorer, Marco Polo, was aware of Baku’s oil in the 13th century. The city has clearly put some of this wealth to good use by implementing many improvements to the city’s infrastructure since its independence from the Soviet Union.

This capital city has hosted the Azerbaijan Formula 1 Grand Prix car race since 2017, which has helped boost the international profile of the city and Azerbaijan as a whole. The 6-km street circuit highlights some of the city’s iconic architectural heritage, including the Old City’s 12th century walls. 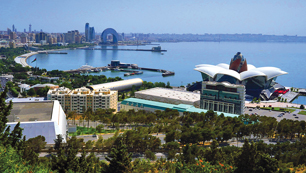 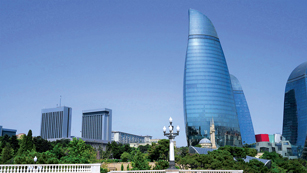 The Soviet-style Azerbaijan National Assembly government building (left) and the modern Flame Towers, which are colorfully lit at night, as viewed from Highland Park. 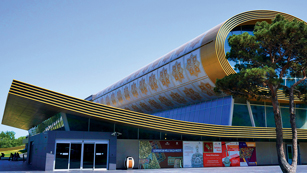 The Azerbaijan Carpet Museum, located near the Baku waterfront, displays carpets from the country’s diverse traditions of carpet making on three floors.

Baku is known for a lot more than being an exotic backdrop to the F1 World Championship. During the medieval period, the city was home to the Shirvanshah dynasty, which governed the area from the nineth through 16th centuries. The Shirvanshahs developed a long-lasting Islamic culture of Abbasid Arab origin. The walled Old City — known as the inner city or “Icheri Sheher” — is at the heart of Baku and is a UNESCO World Heritage site. It includes the Palace of the Shirvanshahs, Maiden Tower (Giz Galasy), bathhouses, bazaar, imposing city gates, and exquisitely designed mosques with traditional ornamentation carved from stone.

We were also interested in seeing some of the city’s modern architecture as there is now a growing number of new urban developments throughout the city, including in or near the new “white city” area in the southeastern part of the city that was once an oil producing and processing area, known as the “Black City.” This area now includes new apartments and museums, such as the striking Heydar Aliyev Center designed by the British-Iraqi architect, Zaha Hadid, with exhibits of the city’s architectural gems and a vast collection of traditional musical instruments. The Flame Towers near the National Assembly and Highland Park are also reflective of the modern links to local history and culture. 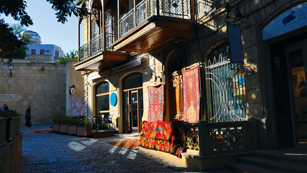 A carpet merchant’s shop in the Old City near to the Maiden Tower. 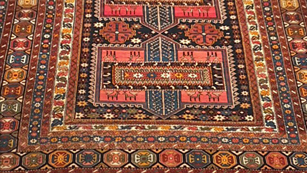 Detail from a carpet from the Baku style, made from wool pile and cotton, dating from the late 19th century. Rectangular shapes filled with flowers and animals completed the patterns. 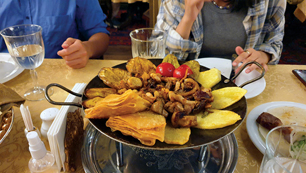 Saj is one of Azerbaijan’s signature dishes. We tried a lamb saj, and it was delicious!

The Azerbaijan Carpet Museum first opened in 1967, when it was housed in the 12th century Juma Mosque in the Old City, but the collection now resides in a modern, purpose built structure designed by an Austrian architect, Franz Janz, that looks like a rolled carpet. Azerbaijan’s carpet making dates all the way back to the Bronze Age, with different regions across the country producing carpets with distinctive patterns and colors.

On our final evening in Baku we had dinner at a traditional Azerbaijani restaurant in Fountain Square, a central pedestrianized space close to beautiful Nizami Park. We tried a lamb saj dish, which is one of Azerbaijan’s most popular dishes. The lamb and vegetables had been cooked with a light sprinkling of herbs in a slightly curved pan over hot coals. The freshness of the ingredients and the succulent meat offered mouth-watering flavors that provided the perfect conclusion to our short stay. I believe the city’s historic and modern architecture, and of course its carpets and food, had left us all with enduring memories and a desire to taste more of Baku.