Bee-Eaters and Hoop-Hoops: Arabia on the Wing 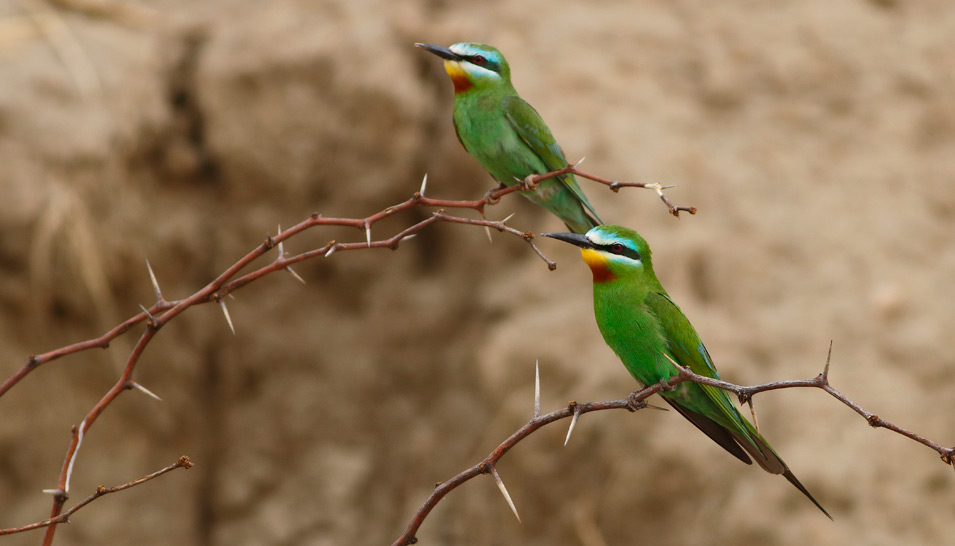 Saudi Arabia has four times as many species of birds per square mile of territory as does the United States.

Whenever I point this out to a fellow American, they refuse to believe me. They simply can’t imagine that a desert country like the Kingdom could possibly match the USA in any matter pertaining to bird populations, let alone quadruple it. Yet, it’s true. On this question, the numbers support me; they don’t lie—despite what Mark Twain had to say on the subject of statistics (you know the quote, the one about “lies, damn lies, and statistics.”)

Actually, Twain may have had a point when it comes to birds. In 2016, the National Audubon Society published an article by Hannah Waters talking about a controversial new study by a group of respected taxonomists who, using a modified definition of “species,” suggest that there are twice as many species of birds worldwide as what experts previously thought. The true number, according to them, depends on your definition of “species.” The traditional definition lumps together groups of animals—in this case, birds—based on how much they looked alike and whether or not they bred with one another. Expand the criteria used, like those researchers have done, and the resultant number grows and grows and grows as it did for them.

For simplicity’s sake, I’ve relied on the traditional definition of species in the writing of this story. In a manner that would no doubt have caused Twain to raise a questioning eyebrow, I’ve chosen the set of statistics and underlying methodologies that best support my argument. With that caveat made clear, you’ve been warned.

While America is admittedly home to nearly double the number of species of birds as the KSA (913 to 500), it’s also nearly five times the size in territory (3.8 million square miles to .83 million square miles). Divide and compare those numbers and you’ll see what I mean: American bird species are far more spread out than are their Arabian cousins—by a factor of four according to my calculations.

I can easily ruffle the feathers of bird-loving friends still more by insisting that Saudi birds on average are decidedly more colorful on the whole than are American birds. In making that bold assertion, I’m relying not on scientifically-verifiable numbers but on my own personal observations having lived in the Kingdom for most of my adult life prior to retiring from Aramco. “That’s my opinion and I’m sticking to it!” as the saying goes. If you’ve divided as much of your time as I have mine between living in the KSA and living in the USA, you may well agree. Think about it. Where in America outside of zoos can you see birds that rival European Bee-eaters and Arabian Hoop Hoops in color and distinction? Case closed.

UK birders reading these words by now are no doubt thinking, “What about us?” and they have a point. England, Northern Ireland, Scotland, and Wales collectively are home to noticeably more birds than is Arabia (598 according to the British Ornithologists Union) scattered across one-tenth the territory (93,600 or so square miles according to multiple sources). Crunch those numbers and you’ll find that the UK can fairly claim to be home to essentially 10 times more bird species per square mile than the KSA and 40 times more than the USA. That stereotype we Americans have of English birders traipsing about the moors in their Harris tweeds with a pair of binoculars dangling from their necks and a dog-eared paperback copy of their favorite field guide to birds tucked away in a pocket is not all that far off.

There’s not enough space available on the AXP website for me to talk about all 500 species of birds found in the Kingdom. Bowing to reality, I’ll focus instead on just three: the aforementioned European Bee-eater and Hoopoe (what my friends and I called the Hoop Hoop), and the national bird of Arabia, the falcon.

The Arabian Peninsula sits athwart three major routes used by migratory birds traveling between Eurasia and Africa, between Europe and the Middle East, and between India and Africa. Twice a year, coming and going, countless numbers of birds stop for a rest in the Kingdom on their way to and fro between their summer and winter quarters. The feathered visitors I recall most fondly are the stunning European Bee-eaters. I remember in particular a morning in the Dhahran camp when I heard a loud commotion outside. When I went out and looked to see what was causing such a racket, I discovered dozens of brightly-colored birds perched on the telephone lines in front of my house singing in joyful chorus. Curious to know what they were, I took a photograph with my Polaroid Instamatic and mailed it to the National Audubon Society back in the US asking if they could identify it. A few weeks later, I received a written reply from someone at their New York City headquarters with the answer: “Those are European Bee-eaters.”

I’ve since learned that there are other species of Bee-eaters that visit the Kingdom twice a year, including the stunning, green-chested African Bee-eater which I spied in my trees and on neighborhood telephone lines many a time. You could never predict precisely when the next flock of Bee-eaters would appear; but, when it did, it was always a treat for the eyes and ears.

The bird I knew as the Hoop Hoop has quite a tale to tell, one involving King Solomon, reputed to have had magical power over birds, and the Queen of Sheba, history’s great woman of mystery. Within the context of the story of the two monarchs’ meeting, both the Qur’an and the Bible refer to the Hoopoe as “the Messenger of Solomon.” As told in those two holy books, having heard a rumor that the Queen of Sheba worshiped the sun and not the One True God, Solomon sent her a message via a hoopoe bird, demanding that she appear before him. The queen responded with her famous visit, accompanied by multitudes of attendants and camels and bearing a king’s ransom of spices, gold, and precious stones as gifts.

“The hoopoe (Upupa epops) is unmistakable,” Aramco annuitant Graham R. Lobley and current UK resident (and avid birder, I’d wager) wrote in “The Living Desert,” an article that appeared in the March/April 2010 issue of Saudi Aramco World. “It has distinctive pinkish-brown plumage with black and white wings. It raises its long crest momentarily when excited or alarmed. In 1998, I confirmed the hoopoe as an addition to the breeding avifauna of Dhahran, where it nests under the eaves of homes and in holes in the limestone hills. In the Mediterranean, nest sites include holes in old olive trees and even stone walls. In Dhahran, it is easy to observe when it is feeding on lawns and sandy patches, where it uses its long curved bill to probe for bugs and grubs, often tossing the latter into the air before swallowing them.” 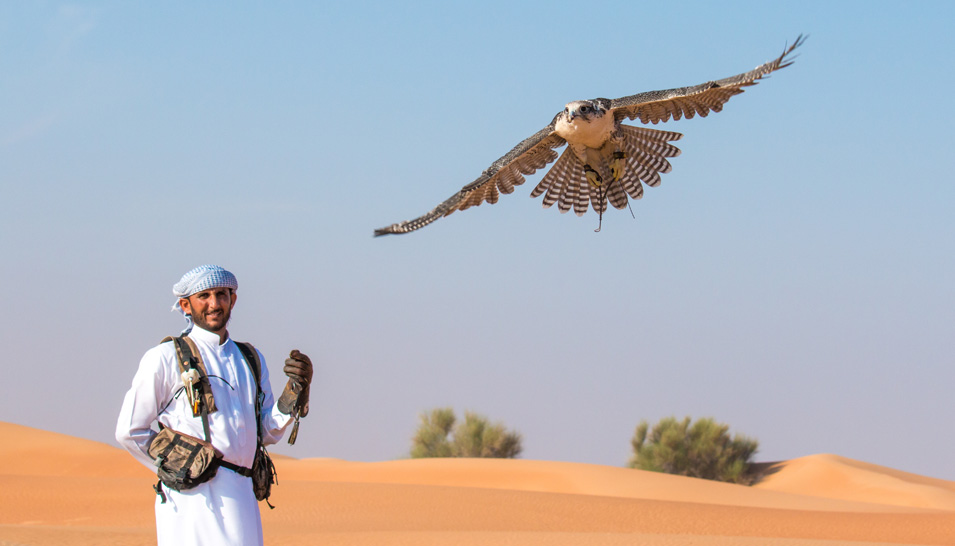 The Hoopoe got its onomatopoeic nickname “Hoop Hoop” from its call—a loud series of cries that sound to Western ears like mine like the English word “hoop” being repeated again and again. It helps, too, that its name is spelled the way that it is. There are three recognized species of Hoopoes: the African Hoopoe, the Eurasian Hoopoe, and the Madagascan Hoopoe. The Eurasian Hoopoe is the species seen in the Kingdom and are also found throughout Africa, Europe, and Asia. Among their distinctive character traits, Arabia’s Hoop Hoops in flight resemble butterflies in their movements; and they engage in an elaborate mating ritual involving food, where the male feeds his inamorata with insects as a sort of pre-nuptial gift.

In a recent AXP article, we wrote about Salukis, “a gift from Allah.” The story of the Saluki in Arabia is inextricably intertwined with that of the national bird of Arabia, the falcon. Since time immemorial, falcons and Salukis have worked in tandem hunting gazelles and hare and other game over the broad desert expanses of the Peninsula. The two are fundamental elements in the traditional Arabian way of life. The Prophet Mohammed Himself is said to have hunted with falcons and Salukis. In the Holy Qur’an, the training of hounds and falcons for hunting is encouraged, carried out in the manner directed by Allah.

Careful training is indeed required, for not all falcons will hunt. Some choose the life of scavengers, others prefer to dine on carrion. Also, some falcons are better suited than others for hunting a particular prey. Typically, the falcon soars high into the heavens in search of game. Spotting its quarry, it falls like a thunderbolt on the animal while keen-eyed Salukis, watching from afar, are released by their keepers and race to the spot.

Debate continues over the origins of falconry. Marco Polo wrote about how Kublai Khan once went hunting with his falcons accompanied by 10,000 attendants. The consensus seems to be that the sport originated in China and Asia, and only later spread to Arabia and the Middle East. Crusaders brought the tradition of falcon hunting back with them to Europe. It has even been argued that the English hunting cry of “Tally Ho!” comes from an expression in the Bedouin dialect, “Ta’alu hone!” meaning, “Come here!” It’s a great story, if true.

A Saudi prince recently made headlines worldwide when he booked seats aboard a UAE flight for 80 of his prize falcons. Trained hunting falcons like his arguably deserve the royal treatment. A purebred gyrfalcon, the rarest of all hunting falcon breeds, reportedly fetched $250,000 in a recent sale. Normally a hunting falcon goes for between $5,000 and $25,000, still a hefty price tag for most budgets. The Falcon Hospital in Abu Dhabi—the largest such facility in the world—reportedly treats some 9,000 birds annually, equivalent to 24 per day or one every hour for a year. An estimated 3,000 falcons are used for hunting in Saudi Arabia every year, the vast majority of them (70%) Saker Falcons, joined in lesser numbers by Peregrine Falcons (20+%), and in small numbers by Lanner Falcons (2%).

Whether you’re a dedicated birder already living in the Kingdom or a bird-loving annuitant looking for a good excuse to return to the KSA, you have a wide range of premium bird-watching sites to choose from. The website Birds of Saudi Arabia has useful links to 27 of them, click the button below:

I’ve been teased more than once about my fondness for attending gatherings of Aramco annuitants here in the States and over in the Kingdom. “Birds of a feather flock together,” I’ve been told. Indeed we do!