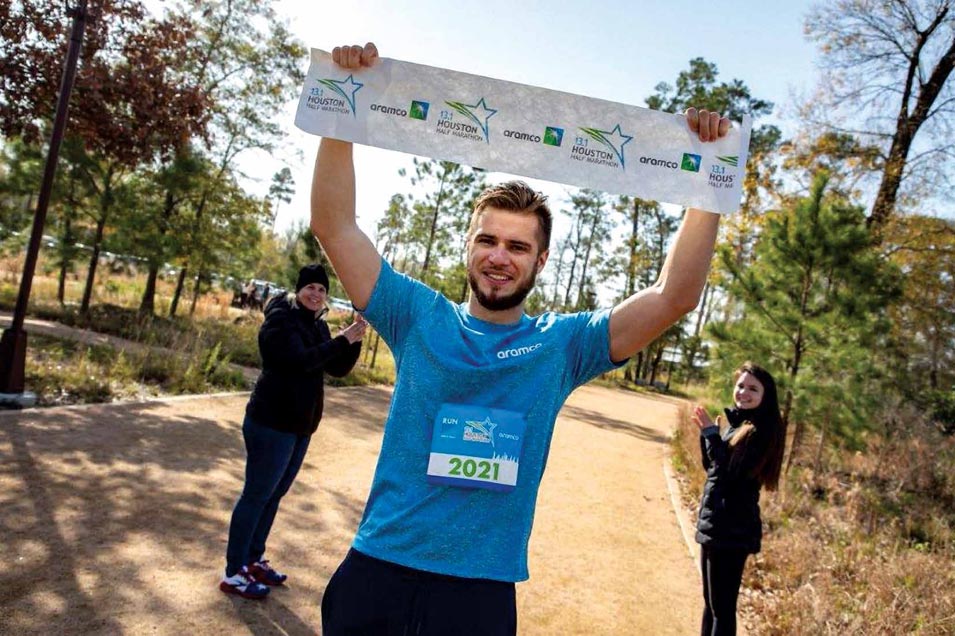 Although the footrace wasn’t held on Houston’s fast and flat course this year, Aramco supported the dedicated runners by having runners record their times on a smartphone app developed for the Half Marathon.

This year’s Aramco Houston Half Marathon was held virtually Jan. 8-17, with runners completing 13.1 miles in their neighborhoods as races observe physical distancing during the pandemic to keep people safe.

While the footrace wasn’t held on Houston’s fast and flat course this year, Aramco stayed committed to the event and the runners, who recorded their times on a smartphone app developed for the race.

More than ever, runners in this year’s race reflected the resiliency of the human spirit in tough times.

“We are pleased to support the Aramco Houston Half Marathon and the special role it is playing as an outlet for health and fitness during challenging times,” Nabeel I. AlAfaleg, president and CEO, Aramco Americas, said ahead of the race.

Although Aramcons typically help send runners off at the starting line wishing them well, this year they received a digital message from AlAfaleg via social media.

“To all runners in this year’s Houston Marathon races, we at Aramco wish you the best. Running a virtual race in times like these takes enthusiasm and resilience,” he said. “We admire your dedication and look forward to seeing you back at the traditional starting line in 2022!”

This was Aramco’s 17th year sponsoring the race, which has become one of the most popular half marathons in the world.

The full, half, and 5k races make up a three-day weekend event that typically draws more than 30,000 runners and 200,000 spectators, along with droves of Aramcons who hand out race kits to runners. This year, more than 60 Aramcons, retirees or employees of Motiva — as well as their family members — registered to run one of the races.

The “Run for a Reason” charitable component of the race weekend also continued. Over the past decade, participants in the three races together have generated over $2 million per year in donations.

“Helping to link the philanthropic community with race participants to raise funds for meaningful causes is important to us,” said Alma Kombargi, acting director of Public Affairs at Aramco Americas.

First time and veteran runners of the race received their coveted 2021 Aramco Houston Half Marathon finisher medals, to commemorate what may be their first and perhaps only virtual race.

Dmytrii Dolhov, a logistics advisor at Aramco Americas, ran his half marathon in one of Houston’s large parks and enjoyed it even without the roar of the crowds.

“I’m honored to run as an Aramco employee ... and that the company gives us this opportunity to run such a great event in Houston,” he said. “Hopefully, next year, the pandemic will be over and I’ll be able to run the race through the city as we normally do,” he added.

Christin Faykus, an attorney in the Aramco Americas Law Department, was among a handful of runners chosen this year to be an Aramco Houston Half Marathon race ambassador.

The honorary role is awarded to dedicated runners who can inspire others to progress in the sport.

In this year’s virtual race, she provided training tips to runners in videos that were included in an app just for participants.

She likes to run to go fast, but also to relax.

“I’m always tracking miles and times but it’s more important to me just from the perspective of it being an outlet — it’s just the best form of stress relief,” she said.

She encouraged runners to have confidence in their own resiliency, as they have already weathered the pandemic.

“My general advice to new runners is to trust your training. The good thing about all of this is that it has made you really mentally tough, and that is half the battle when you are running a marathon or half marathon,” she said.