Aramco Celebrates 64 Years on the Air

Collaboration has always been the tradition at Aramco’s television and radio channels. Today Danah Abu Khamsin (left) and Lamees Al Oboudi host the “All Request Show” together on the weekend.

If you turn on the radio anywhere in the Eastern Region of Saudi Arabia, you’ll probably stumble upon the latest Billboard hits on Studio 1 FM, or an intriguing new beat on the World Music Show on Studio 2 FM.

Each channel provides listeners with commercial-free music around the clock and carefully curated shows designed with their audiences’ preferences in mind. They broadcast to more than 1 million listeners on a daily basis, accompanying people to work every day and providing a high quality service for news and entertainment.

Radio World Day is celebrated on Feb. 13 each year. This year, we are celebrating more than 110 years of radio and 64 years since the terrestrial launch of Aramco’s radio channels.

The evolution of Aramco radio

Aramco’s radio stations have come a long way since their inception in the late 1930s. Back then, there were no radio stations for miles, and so, at the request of Dhahran employees and residents, music was played over speakers to entertain those visiting the Kings Road swimming pool. It was several decades later, in 1957, when the stations began broadcasting over the air on the AM band before switching to FM in the mid 1970s.

James S. Baker, supervisor of the company’s broadcast services, said the channels originally supplied news and companionship for the expatriate community and grew to reach more of the Dhahran community and nearby areas. “There was a time when the channels were used to play the audio for the television channel owned by Aramco in Arabic and English,” he said. “When the TV station signed off each day, the channels would play classical and country on one station, rock and pop on the other.”

Not many listeners knew the channels belonged to Aramco until 2012, when the Aramco media team, headed by Osama S. Al Kadi, decided to brand the channels and utilize them as a communications platform for the company.

“It was an opportunity for Aramco to provide stewardship for the community and offer another way of experiencing the Aramco brand,” said Baker. “After all, people spend more time with us on a daily basis than any other platform.” 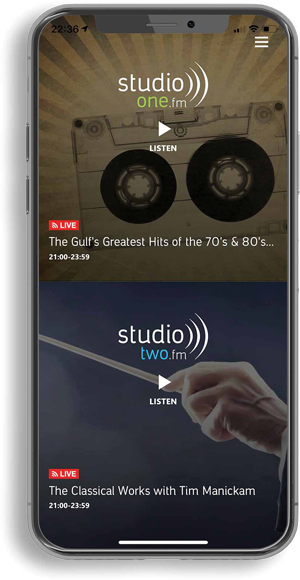 Perhaps it is this sense of community that drove the numbers of listeners up during the past few years. “Our surveys show that Saudis and young listeners are tuning in to our channels more than ever,” said Al Kadi. Localizing the channels was on the top of Al Kadi’s to-do list for the radio stations from the very beginning, along with surveying listeners to find out more about their interests, and introducing fresh and engaging shows for audiences throughout the day.

“We updated a lot of our music and tried to become more contemporary on Studio 1,” said Al Kadi. “We upgraded all public service announcements, hired excellent local writers, and started expanding our network and making each show unique.”

More recently, the team also completely revamped Studio 2 from its earlier days of classical and smooth jazz playlists. Over the past six years, it has transformed into one of the top channels in the region.

“Our mission was to create a channel that introduces our listeners to music from all over the world,” said Scott Boyes, the voice of Studio 1 FM’s morning show and manager of Studio 2 FM. “Studio 2 is a platform of discovery into new cultures, instruments, and stories. And we are happy that the channel has its own identity now.”

In a way, the direction of the radio stations is a reflection of the growing culture and diversity of Aramco. “There’s always something new to learn when you’re looking to step out of your culture zone,” said Boyes.

A strong sense of community

Engaging with the audience is a big part of working in radio. Danah Abu Khamsin, radio host and social media manager, said she wanted to create a real connection with people instead of just talking at them. So, instead of merely posting about the times of shows, she shifted the focus of the channel to become more interactive.

Abu Khamsin currently co-hosts the All Request Show with Lamees Al Oboudi. “The show consists purely of what people want to hear and we get it all through social media,” said Al Oboudi. “It’s one of the best feelings because you know that someone is tuned in to hear your show, and we definitely don’t take this responsibility lightly.”

Prior to the pandemic, the dynamic duo had started covering events as they happen at Ithra and at the Sharqiyah music festival, where they conducted live interviews with artists.

“There are so many talented people in the community and we want to give them an opportunity to share their talents with us,” said Abu Khamsin. “Featuring emerging local artists is definitely the next step for us.”

Radio is one of the oldest mediums thathas persevered because of its simplicity and effectiveness. “Radio has survived because it re-evaluates its purpose in the community,” said Boyes. “Its real value comes from being able to localize your music, weather, and stories. People want to feel like you are part of their community and that’s what we strive to do every day.”

There are many surprises in store for listeners around the Kingdom. So, stay up-to-date with the radio family’s news by following them on social media and download the app “Energy Radio KSA.”