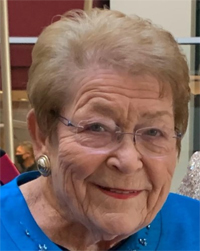 Marion Louise Gadai, 87, of Tyler, Texas, went to be with The Lord on Tuesday, December 14, 2021 in Tyler, Texas. She was born July 19, 1934 in Simpson, PA to Joseph and Sophia Scotchlas. She was one of six children. She is predeceased in death by her husband of 46 1/2 years, Eugene Gadai of The Woodlands; two brothers (Joseph and Frank) and one sister (Charlotte). She is survived by her daughter, Karen Johnson and husband Randy of Tyler, Texas; son, David Gadai and wife Toni of North Carolina; grandchildren, Kevin and wife Brittany, Courtney, Blake and Brian Johnson, Gregory and Hannah Gadai; sisters, Louise Yavoroski of Carbondale, PA and Barbara Galvin of New York and many nieces and nephews.

After graduation Marion spent a couple of years working in New York prior to marrying Eugene. Marion joined Eugene overseas. They were married in Beirut, Lebanon, and moved to Saudi Arabia where they spent over 20 years working with Aramco before moving back to the States and settling down in The Woodlands, Texas. She enjoyed playing golf working on puzzles and the occasional trip to the casino with her "favorite son-in-law". She was an excellent cook and everyone will miss her famous pierogi's. She was a loving wife, mother, grandmother, sister and will be greatly missed.

A graveside ceremony is set for 10:30 am Saturday, January 15, 2022 at Forest Park Cemetery in The Woodlands, followed by a reception at The Woodlands Palmer Course.