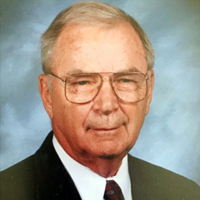 Earl L. Johnson (89) passed away on April 24, 2019, sleeping peacefully at home, while holding the hand of his loving wife of 67 years, Patricia Ann Johnson. He loved God, his wife, family and friends and found great purpose in each of the seasons of his life.

Born of humble beginnings in Oklahoma, he was the oldest of 6 children and had a lifelong bond with his identical twin brother Jarl. He graduated from the University of Tulsa with a degree in Petroleum Engineering. Shortly after graduation, he was drafted during the Korean War and served proudly in the U.S. Army. He led a distinguished career of 41 years with Texaco both overseas and domestically, including assignments in Bahrain, Trinidad, Ecuador, the Far East, Middle East and Europe. He retired from the company as President of Texaco Exploration and Production, Inc. and Vice President of Texaco, Inc. During his career he also served on the Boards of ARAMCO, the Board of the Houston Symphony and on the Board of The University of Oklahoma.

Earl loved his church, The Woodlands United Methodist Church, where he attended and served on the missions committee, the columbarium project and helping to oversee flood relief efforts in 1994. He faithfully attended Quest, a men’s fellowship and Bible study dedicated to equipping men to live out a life honoring to God. He also served his community as a volunteer with Habitat for Humanity.

Traveling our country and the world with his wife and family were one of the things that Earl enjoyed most in his retirement. He was an avid reader, enjoyed his cigars and loved playing golf with his close buddies.

Although very accomplished, Earl always credited his bride Pat for their success. He was most proud of the fact that each of his children and grandchildren knew and loved the Lord Jesus. He was a humble and kind man of high integrity, who was welcoming of everyone and seldom missed an opportunity to offer support to those in need.

As well as many dear family members of the Johnson, Bodenhamer and Bingham Families

Memorial Service and Celebration of Life

In lieu of flowers please make any donations to The Woodlands United Methodist Church Missions Program.