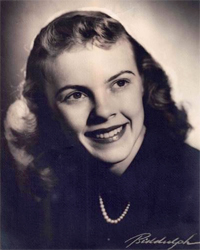 Claudine Pearson Luppi, age 92, passed away on August 4, 2020 due to complications from Covid-19. The eldest of 8 children, Claudine was born in Lewiston, Idaho on March 30, 1928 to Anna Lucile (Sanderlin) and Wilbur Leander Pearson.

Claudine was a shining light to her family and friends; smart, funny, talented, beautiful, and intent on making her way in the world. After graduating Lewiston High School, she worked as a reporter for the Lewiston Morning Tribune and began undergraduate studies in Journalism. In 1950, she married Hobart Luppi who subsequently became a career diplomat with the U.S. Foreign Service, Department of State, reflecting their mutual desire to travel and see the world. They lived in Egypt, India and Pakistan during the 1950s, 60s, and 70s.

In India, Claudine was an important part of the American community, serving as President of the American Women's Club, while also raising 4 children. During Jacqueline Kennedy's visit to New Delhi, India, in 1962, Claudine was a member of the "Banquet Committee" which organized all aspects of the official dinner for the First Lady with guests Prime Minister Nehru, Ambassador Galbraith and other dignitaries (a copy of Claudine's personal recounting of the events, "A Dinner for the First Lady," was donated to the John F. Kennedy Presidential Library and Museum in Boston, MA, file # 2011-055). In the mid-1960s, she completed her undergraduate degree in Education and taught 5th and 6th grades for several years in Loudoun County, Virginia. In 1970, the family returned overseas, living in Karachi and Islamabad, Pakistan, where she was a renowned hostess, a leading member of the American community, and a Journalism teacher/faculty advisor at Karachi American School. During the Indo-Pakistan War of 1971, American nationals were evacuated from Karachi to Tehran, Iran, and Claudine played a key role as one of the leaders in charge of organizing and assisting the evacuees during their month long stay; including publishing a daily informational newsletter for the evacuees.

After her divorce in 1977, Claudine joined ARAMCO as an elementary school teacher in Saudi Arabia before relocating to Las Vegas where she was part of the Editorial Staff for "What's On In Las Vegas." Over the next 30 years she continued to seek out new adventures, living in Virginia, California, Florida, Texas and Washington State, while focusing on her personal writing projects, including an extensive family history/cookbook co-authored with her cousin Glory Ellen Pearson Peel.

Claudine loved her family, teaching, writing, and being a friend and mentor to anyone who needed a helping hand. She is survived by three of her children, Mark (Eveline) Luppi, Mary (Anthony) Basich and Ann (Peter, deceased) Von Mehren, and six grandchildren, Elizabeth "Tika" Von Mehren, Edward Von Mehren, Colin Von Mehren, Chase Basich, Arielle Basich and Connor Basich, all of whom she adored. She is also survived by her sister Blanche Freeland, brother Steven (Maryan) Pearson, and a large extended family. The world will miss her generous and adventurous spirit. A service will be held at a later date when she can be buried next to her son Brian, who predeceased her in 1973, at Hillsboro Cemetery in Virginia. In lieu of flowers, donations may be made to a charity of your choice with appreciation from the family.