Unicorns Return to the Rub’ al-Khali 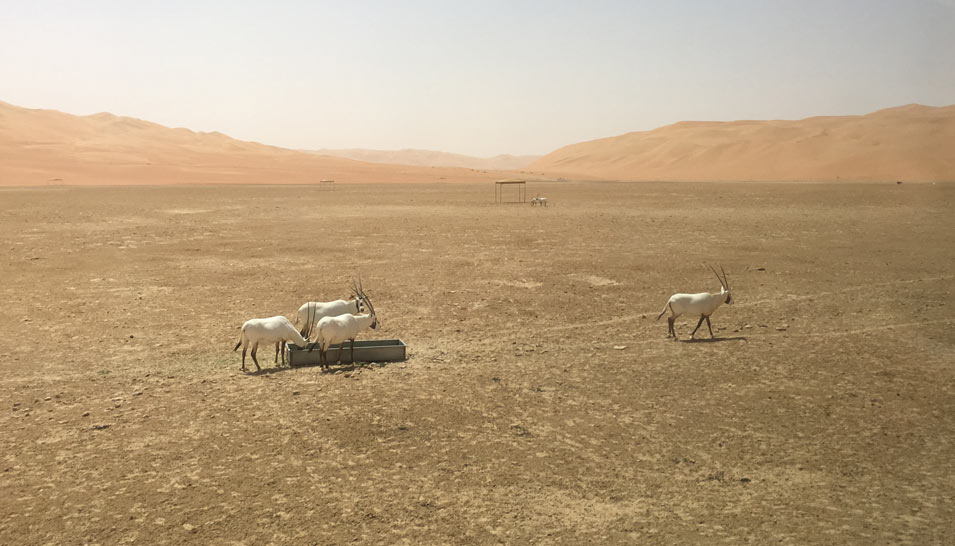 Here’s a bit of good news for young girls the world over who collect unicorn dolls and whose favorite T-shirts and sweatshirts and pajamas all feature colorful images of the mythical creature: Unicorns have reportedly been spotted in the deserts of Saudi Arabia. Really, but not really. Almost, though.

According to some—but certainly not all—historians, the legend of the unicorn originated from sightings of the Arabian oryx, a near-mythical creature in its own right that by 1972 had nearly gone the way of the Dodo bird, with only four of the exotic animals left alive in the wilds of the Rub’ al Khali. Such had been the toll taken on the breed by a century of over-hunting and aggressive illegal poaching. With concerned conservationists worldwide warning in concert that the end of the species was near at hand unless drastic action was undertaken immediately, that solitary quartet was captured near Shaybah and transferred to zoological facilities in the U.S. where, through careful breeding, the oryx was rescued from a near-death experience.

Another extraordinary Arabian specie—the sand gazelle—nearly suffered the same fate, while, by the late 1930s, the indigenous Arabian ostrich had gone extinct in the wilds. Today, thanks to concerted efforts carried out under the aegis of Saudi Aramco, all three species are staging remarkable comebacks at the Shaybah Wildlife Sanctuary in the Empty Quarter, proving that miracles do indeed happen. Some miracles, like these, require a helping hand, and, thankfully, Saudi Aramco was there to lend it.

“The culmination of years of hard work and determination,” Aramco wrote, “the sanctuary represents our drive to protect ecologically sensitive areas and the biodiversity that inhabits them. Located adjacent to our mega-facilities in the area, the fenced sanctuary now protects dozens of native plant and animal species.”

“We recognized there was an opportunity to not only protect the environment near our Shaybah mega-facility,” they continued, “but take a step further by actually improving the existing biodiversity landscape and setting up an internationally significant wildlife sanctuary. … Surveys revealed that the Shaybah area was more than just sand dunes and sabkhas (salt flats). Although some key species were missing, it still contained a unique, important, and functioning eco-system, including at least 11 highly specialized desert plant species.”

In 2011 a far-sighted preservation and restoration campaign was launched with four key goals in mind:

Once a suitable area was identified in the Rub’ al Khali, construction began in 2014 at the Shaybah site on what would soon become a 637 sq. km. (246 sq. mi.) protected sanctuary. A key feature of the site was a 106 km. (66 mi.) perimeter road allowing security patrols to circumnavigate the entire sanctuary in only three hours. Faced with the dual challenge of monstrous sand dunes and punishing summer heat, construction crews went to work, and, as though by magic, two years later the Shaybah Wildlife Sanctuary was ready to welcome its precious new occupants. Cheers were heard upon the arrival of “ostrich by truck from Taif and gazelle and oryx from their breeding centers near Riyadh.”

“Only Saudi Aramco,” the company noted, “with its deep desert construction expertise, could have pulled this off.”

The three species were introduced in a three-stage process:

Despite all the planning and effort that went into the creation of the Shaybah Wildlife Sanctuary, nobody knew for certain how well the animals would adapt. So far, Saudi Aramco is happy to report, “the results have been remarkable. There are now a total of 76 oryx, 96 gazelle and 13 ostrich within the sanctuary.”

“To successfully re-establish any large bodied species is a rare conservation achievement globally,” Christopher Boland, a terrestrial ecologist at Saudi Aramco involved in the project commented afterwards. “To establish three species into a desert—the harshest of environments—is just extraordinary. It’s incredibly rewarding—one of the highlights of my career.”

After significant reserves of Arabian Extra Light oil was first discovered at Shaybah in 1968, it took 30 years for Saudi Aramco to begin serious development in the region owing to the extreme climate, logistical, and extraction challenges posed by the remote site. That makes the creation of the Shaybah Wildlife Refuge all the more remarkable.

As Saudi Aramco noted about the Arabian oryx, sand gazelle, and ostrich on the occasion of the inauguration of the new facility, “Now the deserts around Shaybah once again serve as their home. The Shaybah Wildlife Sanctuary is further proof that oil and gas operations and environmental protection can exist hand in hand.”

AXP owner Vicci Turner visited the Shaybah oil camp and the Shaybah Wildlife Sanctuary during the recent reunion in Dhahran. “I was very impressed with the sanctuary,” she tells us, “and with what Aramco has done to establish this refuge.”

We are too, as are fans of the unicorn of all ages who will no doubt be delighted by this news. In their imaginations, and now in the red sands of the Empty Quarter, the legendary creature lives on, along with its two brethren.