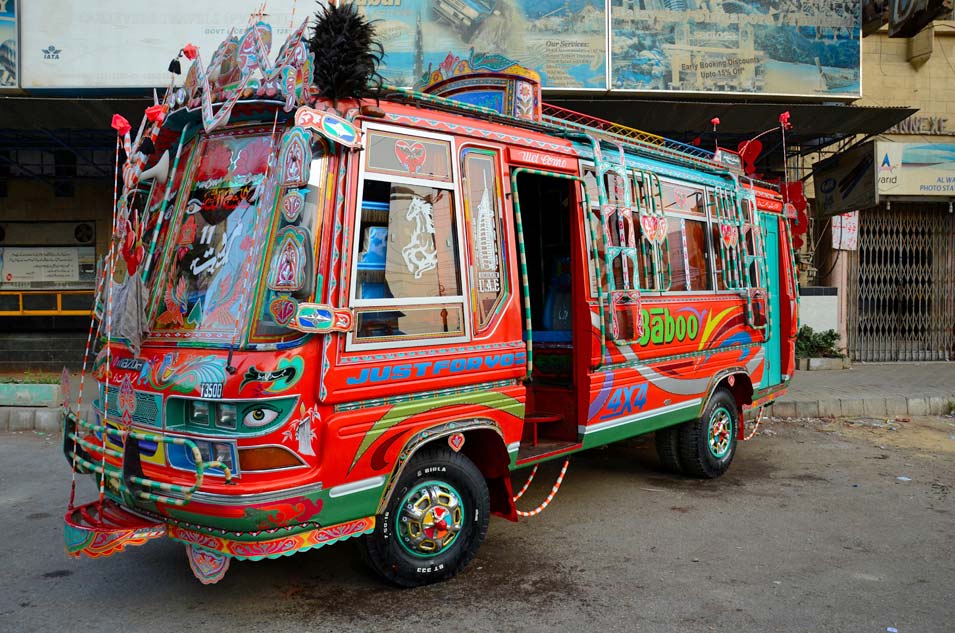 Nearly half a century ago—in its March/April 1969 edition, to be exact—Saudi Aramco World published an article titled “Gaily Go the Lorries.” The piece was written by Fuad Rayess, General Supervisor at the time of the Arabic Press and Publications Division of Aramco’s Public Relations Department. The article is every bit as entertaining to read today as it must have been back then when it was originally published.

“On the side of a bus recently,” Rayess wrote, “I read a quotation that made me stop and think. It was a line from a song made famous by an Egyptian singer named Shadya: ‘The nights of life are numbered,’ a sobering thought. What caught my attention, however, was not the sentiment of the song, but how gay the bus looked with the verse written along the side in lovely Diwany calligraphy. It was the first time I ever noticed this delightful art form which, for want of a better term, I’ll call ‘truck art.’ 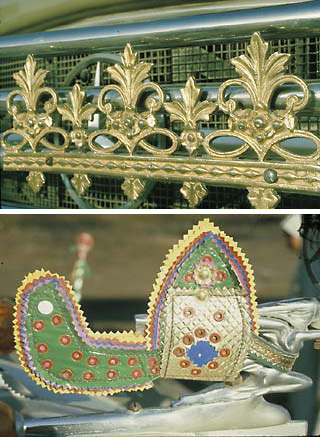 “Truck art—which embraces buses, taxis and the ubiquitous Beirut ‘service’ cars—is no more than the decoration of the hoods, hubcaps, door-panels, tailboards, railings, fenders, bumpers, or any other surface that strikes the fancy of the artists or drivers. It takes a variety of forms—from brilliant Kodachrome postcards on the dashboard of Beirut taxis to plastic-covered but elegant carpets in Jiddah taxis. Some drivers simply paint the trucks in bright colors, while others hang up silk scarves, silver coins and wax fruit. A few owners have hammered out iron designs on roof racks and wired lights to them. At night the effect is rather like that of a cruise ship sailing into a harbor.”

Revisiting Rayess’ words recently got me to thinking about the “truck art” I saw while traveling in the Middle East (and the world) during my 25 years of living and working in the Kingdom and about what I’ve seen of it in the years since after returning home to America.

Festooning one’s set of wheels in eye-catching designs rendered in bright and brilliant colors has a long and storied history here in the U.S. I remember a famous essay from the pen of the late Tom Wolfe first published in Esquire magazine in 1963 and titled in typical Wolfe-ish fashion, “There Goes (Varoom! Varoom!) That Kandy-Kolored (Thphhhhhh!) Tangerine-Flake Streamline Baby (Rahghhh!) Around the Bend (Brummmmmmmmmmmmmmm)…” Two years later, that served as the basis for the title of Wolfe’s first published collection of essays, The Kandy-Kolored Tangerine-Flake Streamline Baby. 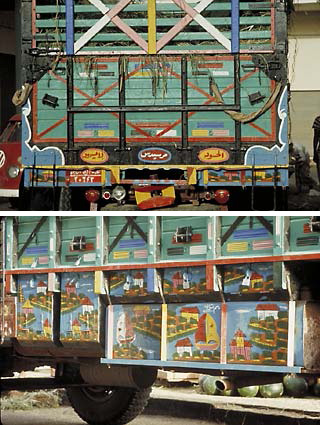 In “Kandy” the article, Wolfe takes a long look at the unique world of custom cars, centering on Ed Roth and George Barris, two prominent figures in something called the Kustom Kulture movement. Wolfe’s first exposure to the phenomenon was at a Teen Fair held in Burbank, California. “You have to reach the conclusion that these customized cars are art objects, at least if you use the standards applied in a civilized society,” he wrote of what he saw that day.

Wolfe’s view of customized cars as art ties him closely to the aesthetic sensibilities of Rayess. Both men treat gaily decorated vehicles as a serious art form.

Wolfe describes what it was like the first time he visited George Barris’ Kustom City, the world’s foremost custom car shop at the time. Seeing Barris there “was like Tiepolo emerging from the studios of Venice, where the rounded Grecian haunches of the murals on the Palladio domes hung in the atmosphere like clouds. … The place looks like any other body shop at first, but pretty soon you realize you’re in a gallery. … This place is full of cars such as you have never seen before. Half of them will never touch the road. … They’ll run, if it comes to that … but it’s like one of the Picasso or Miró rugs. You don’t walk on the d--- things. You hang them on the wall. It’s the same thing with Barris’ cars. In effect, they’re sculpture.”

Elsewhere in his Esquire essay, Wolfe likens customized cars to the sculptures of Constantin Brâncuși, to the paintings of Piet Mondrian and René Magritte and Salvador Dalí, to the architecture of Eero Saarinen, to the writings of François Rabelais. Add their names to those of Picasso and Miró and Tiepolo and you have yourself as impressive and eclectic and diverse a group of artists as can be found anywhere. Just like truck art itself. 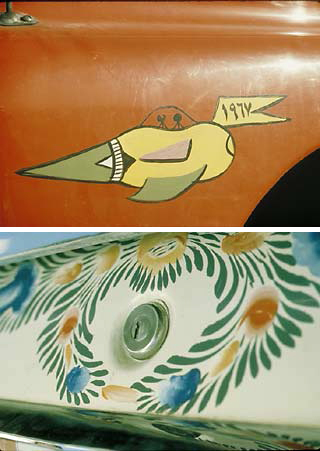 The truck art extolled by Rayess was meant to be driven and seen and taken to heart.

“Like much folk art,” he wrote, “vehicle decoration is the essence of simplicity. The colors are bold, the execution primitive, and the themes ordinary: flowers, trees, birds. Some drivers make ingenious plumes out of feather dusters. Others write or paint excerpts from popular songs, the names of actresses, or titles for their vehicles like ‘The Magic Carpet,’ ‘Conqueror of the Desert,’ and ‘Lover Forever.’ Also popular are safety slogans (‘With slowness comes safety, with speed repentance’) and quotations to safeguard the driver: ‘Returning with Allah’s wish,’ ‘My success is with God’s help,’ ‘May safety accompany you,’ ‘Come back safely to us.’ Above all there are the excerpts from the Koran.”

Rayess wrote his appreciation of the truck art of the Middle East in 1969; Wolfe wrote his of sculpture-like customized cars in the U.S. four years earlier. Both essays reflect the character of their eras. The memory of the two art forms is deeply embedded in the minds of anyone who was there to bear witness.

The “truck art” phenomenon was never limited to the streets of the Middle East and America. Far from it. Visit Pinterest today and you’ll find hundreds of images of custom-painted cars from around the world. The inventiveness on display staggers the mind. The only limit on the possibilities of truck art and customized cars is how far a person can stretch his/her imagination.

Rayess weighs in on the all-important question, “Why?”:

“No one knows just why the decoration of vehicles is so popular among Arabs,” he wrote. “In Saudi Arabia and Jordan, I think it might be a response to the monotony of desert driving. But however it began, it is so widespread today (1969) that it is a rare passenger in the Middle East who rides in a taxi without finding at least a small Persian carpet underfoot.” 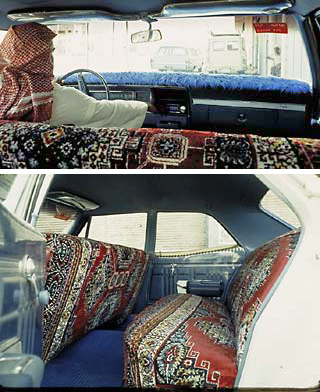 The itch to soup up one’s mode of transportation must be universal. To a more modest degree, I’ve noticed cabbies in places like Hong Kong, Bangkok, and Seoul customizing the interiors of their rides with grab bags of assorted doodads and pictures and trinkets—anything to turn their spaces into something uniquely their own. Consider, too, the jeepneys of the Philippines; the jingle trucks of central Asia; the mod scooters of the U.K. (two-wheeled vehicles count too!); the tourist buses of Thailand; the custom rickshaws of India and Bangladesh (we can’t forget human-powered vehicles!). Truck art in the broadest sense comes in many sizes and shapes and nationalities. There’s a strange, universal force of attraction at work here. How can one explain a phenomenon like this that stretches around the globe?

Wolfe never exactly explains “Why?” He leaves that up to his readers to determine. He does, on the other hand, fill his pages with his signature mind-boggling prose and unexpected observations such as his musings on the quasi-mystical nature of California’s car culture:

“You have the old story of the creative child, the break from the mold of the parents, the garret struggle, the bohemian life, the first success, the accolade of the esoteric following, and finally the money starts pouring in. With this difference: We’re out on old Easter Island, in the buried netherworld of teen-age Californians, and those objects, those cars, they have to do with the gods and the spirit and a lot of mystic stuff in the community.”

AramcoExPats invites readers whom these words describe to submit images they have of truck art from the Middle East and/or customized cars from the U.S. We promise to feature them in a future story. Email photos to [email protected].