The Adventures of Samia and Taha in Turkey

The following report was written by Samia Khan, wife of Engr. Taha Ahmed Khan who is the nephew of Saudi Aramco Ex-Employee Association member Engr. Iqbal Ahmed Khan. Samia and Taha are newlyweds and this report covers their first adventure as husband and wife. 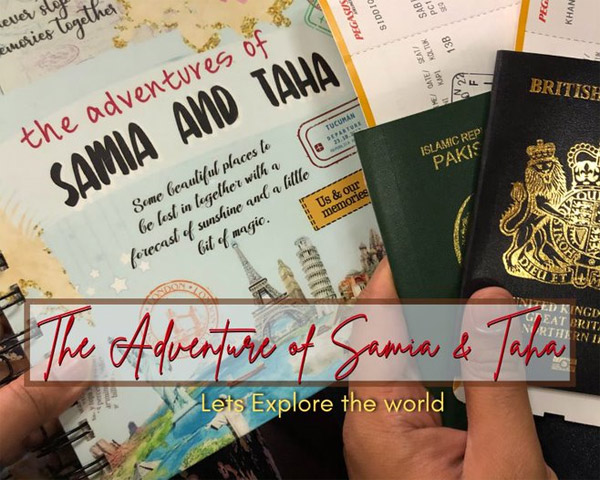 The Adventures of Samia And Taha.

Amidst two years of the COVID-19 pandemic, PCR testing, isolation, face-mask-wearing and social distancing have now become the new way of traveling in 2022. Just like that, we went on our first backpacking trip this year to Turkey for 10 days from February 3-13. Our life's goal is to witness, experience and explore the world, in which case this was the first of our “Adventures of Samia and Taha” that we would like to share. 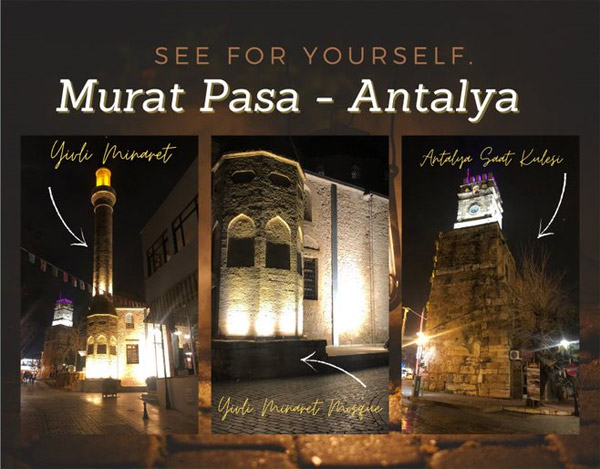 An outlook of Antalya City Center.

We travel to turkey from Pegasus airline; our flight was from KHI (Jinnah International Airport) to SAW (Sabiha Gokchen Airport in Istanbul). We took our 2nd flight 2 hours later from SAW to AYT (Antalya Airport). After reaching Antalya, we travel towards Murat Pasa (the City Center), and check in to Ersoy Ege Apart hotel. Later that day, we roam around the City Center, Saw Hidirlik Tower, Yivli Minaret Mosque, Hadrian's Gate, Antalya Saat Kulesi, then had Turkish all-time favorite Doner as dinner.

In the outskirts of Antalya city, we visited 6 places:

Duden Waterfalls (7 km from Antalya): are a group of waterfalls formed by the recycle station water and ends where the waters of the Lower Düden Falls drop off a rocky cliff directly into the Mediterranean Sea. Also drank the most amazing freshly squeezed orange juice to remember.

Perge and Kursunlu waterfalls Near Antalya.

Next, we bought tickets for Kursunlu Waterfalls (23 km from Antalya): It is situated in the midst of a pine forest of exceptional beauty, and the environment provides a picnic spot.

Then we traveled to Perge Ancient City Museum (19 km from Antalya): Perge was an ancient Greek city in Anatolia, It returns to history as a Pamphylian Greek city, and with Pamphylia came under successive rule by Persians, Athenians, and Persians again. 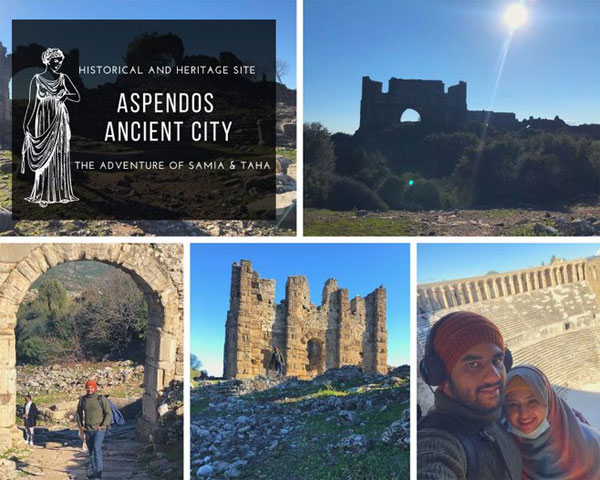 After that, we went to Aspendos Ancient City Museum (48 km from Antalya) which was an ancient Greco-Roman city in Antalya. It is best known for having the best-preserved theatre of antiquity. With a diameter of 96 metres (315 ft), it provided seating for 12,000.

Later in Aspendos, I met two aunties whom I connected with the skill of Crochet on my journey. This was no doubt the best and most memorable moment of my trip. 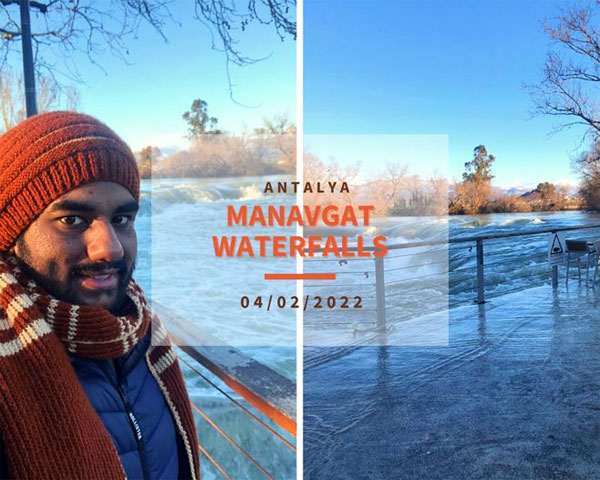 Then we went to Manavgat Waterfalls (75 km): Its high flowing water over a wide area as it falls from a low height and is best viewed from a high altitude. The white, foaming water of the Manavgat Waterfalls flows powerfully over the rocks. Near the waterfalls are shady tea gardens providing a pleasant resting place. 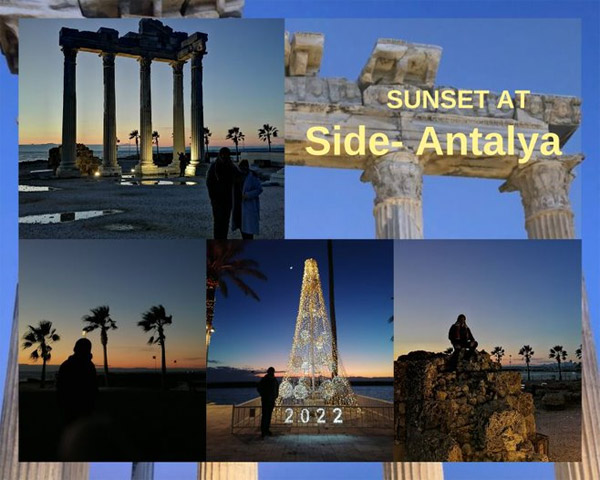 Later we went to Side (76 km from Antalya): It is a city on the southern Mediterranean coast of Turkey. It includes the modern resort town and the ruins of the ancient city of Side, one of the best-known classical sites in the country.

Then we traveled to Denizile and took a minibus to reach Pamukkale. Pamukkale provides a perfect combination of natural and man-made wonders with its travertines as white as cotton stretching to the horizon standing over the ancient ruins of the spa town Hierapolis. It was -6 degrees atop the mountain, and it is was exhilarating to stand in the travertine of lukewarm water at so low a temperature. Oh, it was totally amazing.

Next, we went to Konya from Denizli. From there, we went to visit the Mevlana Museum. I find inspiration from the teaching of Maulana Rumi in my daily life, and I have been following it since my teenage years. The Mevlana museum was previously Dervish Lodge, a home for wandering dervish, where they were trained for life. 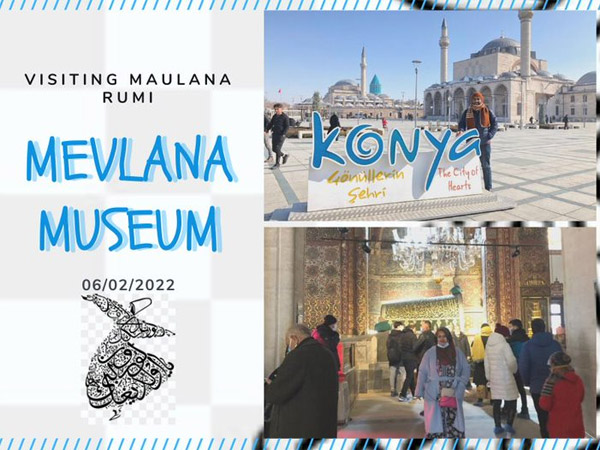 Then we traveled to Nevsehir in Cappadocia to experience a Hot Air Balloon Ride. It was so exciting but yet a smooth takeoff and landing. We had a pilot and a co-pilot, and 28 other passengers in our hot air balloon basket. Pre-flight we were taught 2 basic rules. The first was to not attempt to go outside the basket when in the air. The second is that when we are going to land, we must be in a crouching position, putting weight in the opposite direction.

It felt as if time was in slow motion up in the air, as the beautiful valleys of Cappodocia were dancing in front of our eyes, and the radiance of our smile was shining brighter than the sun, which was peaking behind the clouds. 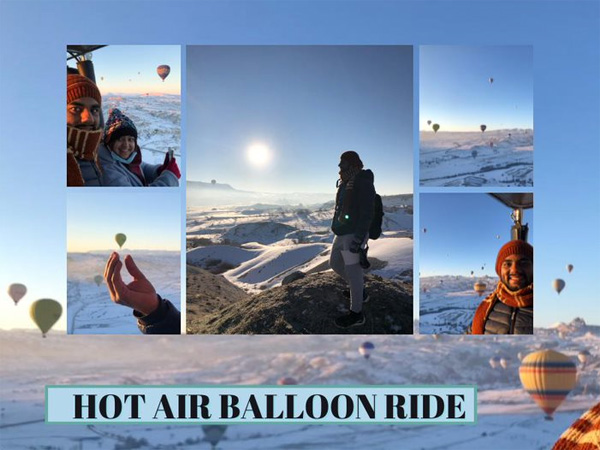 The next activity in Cappadocia was to select a tour. There are basically 3 types of tours; Red Tour, Blue Tour and Green Tour. 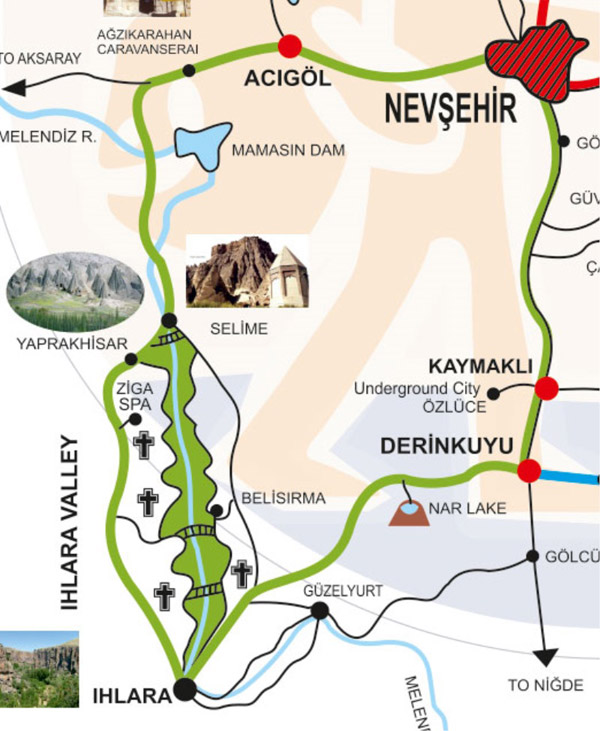 We chose the Green tour, it included pick up service from the hotel and takes you to the highlights of the Southern Cappadocia: 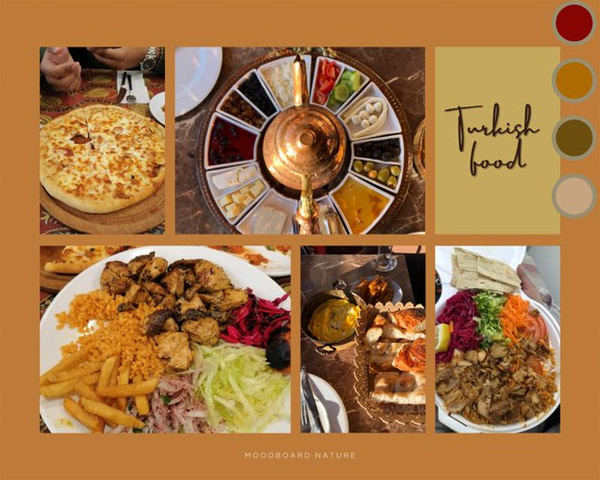 All of the Turkish food we tried 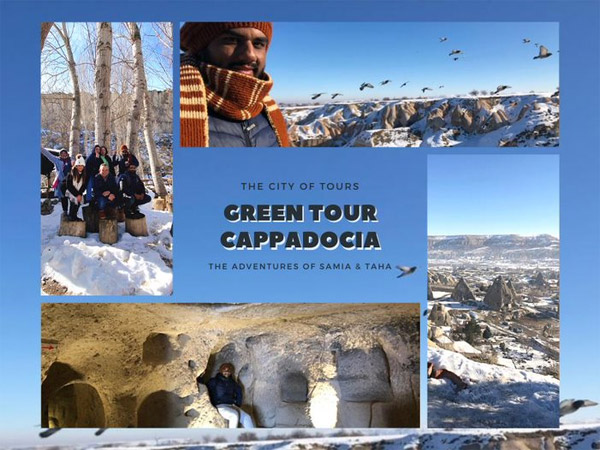 Later that night we went to dinner at Evanos restaurant to have a Turkish Dinner that is showcasing Turkish Traditional dance. 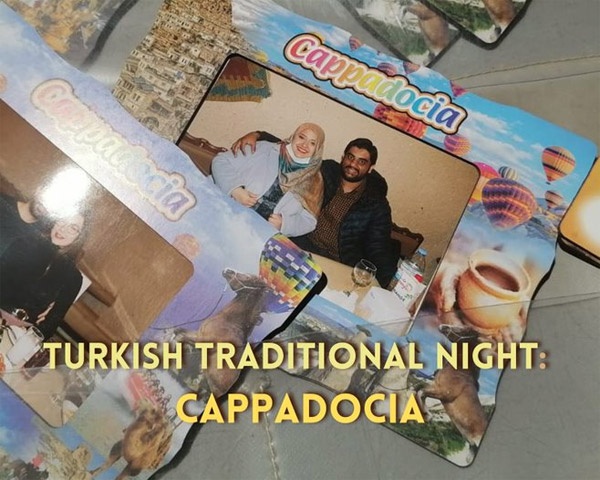 When we reached Istanbul later from our flight from Kayseri airport, we then traveled towards the European Side of Istanbul. Our stop was Gulhane; near around it was areas of the Grand Bazaar, Sultan Ahmet, Hagia Sophia, Topkapi Palace. 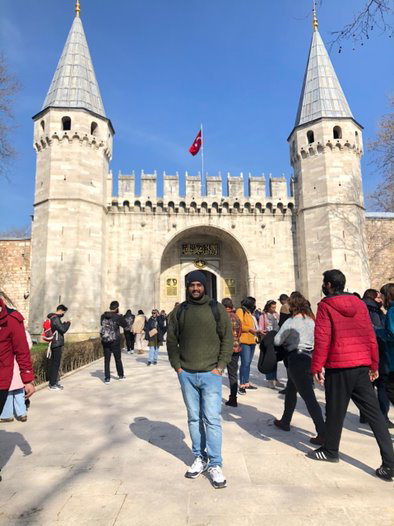 The best part of going to Istanbul was, I bought 20 kg of yarn for my crochet business, Daajees. And it was so much fun to shop around. We stayed for around 5 days in Istanbul, it was kind of a time to relax and explore the culture, food and heritage of the city.

SAEEA wishes both Samia and Taha to witness, experience more adventures that come ahead in exploring the world, BEST OF LUCK to you both.