Tales of the Bedouin - Part III: Bathan the Well Digger and His Son, Bakhait

AramcoExpats readers might recall my short piece published in May 2018 that described a random encounter with a lone, enigmatic Bedouin deep in the Saudi desert in 1979.

Here is an excerpt from that story:

. . . As we were driving (along an empty desert track) later that afternoon, we encountered a handsome, dignified gentleman walking alone in the opposite direction. He was dressed in a navy-blue sports jacket over his beige winter thobe and had a leather satchel (water bag) strapped across his chest. In my journal, I called him the “constable,” because he carried a rifle with bullets and had a very serious demeanor. We stopped, got out of the truck, shook hands with him and exchanged pleasantries in our limited Arabic. After his response, there was a long, awkward silence. He looked at me with a stoic, slightly walleyed gaze. None of us really knew what to do next. Finally, I motioned that I would like to photograph him, and he agreed. As we were headed in opposite directions, we thanked him and continued our separate ways, leaving so much unsaid.

Through the ensuing years, I often wondered about this mysterious man on his lonely trek across the desert expanse. What was his story? What tribe did he belong to? When I returned to the kingdom 35 years later, I showed the photo I took of him to dozens of Saudi Bedouin friends who had grown up in that area near Fazran. They, in turn, sent the picture to friends and relatives but, try as they might, we have been unable to identify him. The only clue is that his facial features appear to be those of the Al-Marri tribe. 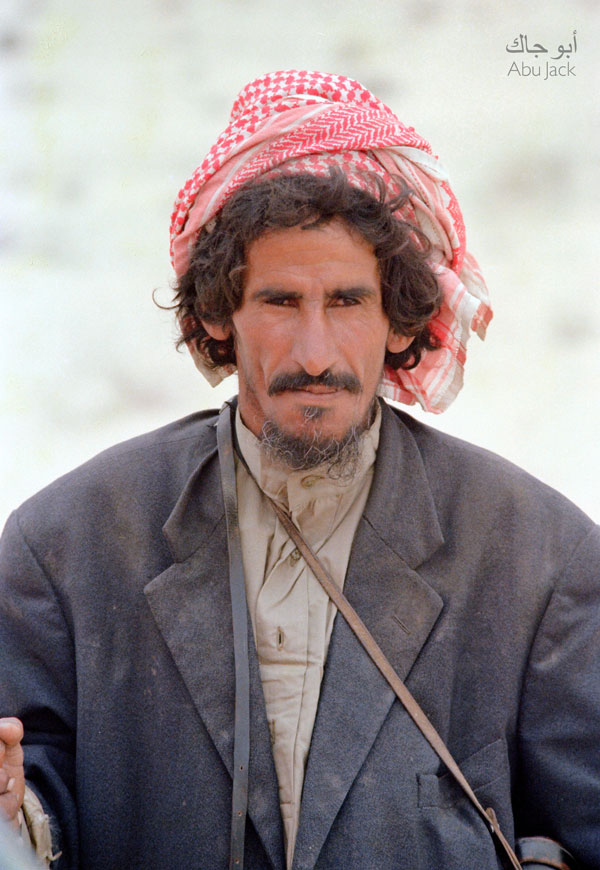 In my journal, I called him the “constable,” because he carried a rifle with bullets and had a very serious demeanor. But who was this man, walking alone in the desert?
© Mark Lowey. All rights reserved.

On April 27, 2019, I received an urgent WhatsApp voice message from my friend, Quriyan Al-Hajri, the legendary Saudi Aramco explorer and road surveyor. We had first met in October 2013, shortly after I joined Saudi Aramco, at an informal art exhibition in Abqaiq Mall, organized by the Abqaiq Art, Craft and Hobby Group. Quriyan and I struck up a conversation about some of my photos of the Eastern Province taken in 1978-79, when I first worked in Saudi Arabia as a young contractor. To my surprise, he told me that he recognized, and was related to, some of the Bedouins in the photos. We have been friends ever since. After retiring from Saudi Aramco 2016, I returned to the USA and still keep in touch with Quriyan by video calls and social media.

Through Quriyan, I became reacquainted with the descendants of the Bedouins I had photographed. I shared with them the photographs I had preserved for three decades, and together, we have spent many hours reminiscing and poring over the images. The one photo that stubbornly eluded identification was the portrait of a solitary Bedouin taken in 1979. No one could say who he was or find any of his kin.

“Abu Jack, how are you?” exclaimed Quriyan. “Kef ‘Halek? How is your family? Good?” began his WhatsApp audio message with the usual salutations.

“You know the guy you met at the Khor (water well) in 1979? That guy, you met him there, he was wearing the jacket? That guy, I asked all the people here, I showed them the photo, they didn’t know him.” Over the years, Quriyan had reached out to his extensive network of friends, family, and contacts, hoping to help me locate the man in the photo, usually to no avail. But never one to give up, Quriyan persisted with the search.

“Today I sent the picture to one of my friends, and he forwarded it to some people, and one guy called me here and said, ‘This is my father!’” Elated, I listened as, much to his delight and mine, Quriyan recounted his conversation, revealing the first strands of the story of the man behind the photo.

His name was Bathan Mohammed Al-Ulayyan Al-Marri. We had correctly deduced that he was of the Al- Marri tribe. His son’s name is Bakhait. Bakhait has three sons, the grandsons of Bathan. Bakhait and the grandsons were out in the desert with their camels when they received the photo on their cell phones. One of the grandsons immediately called Quriyan.

“Alhamdulillah, thanks be to God. Thanks for Mark. This is our grandfather!” they said. “Our father is crying today, now, when he saw the picture of his father, because he didn’t have any picture of him [from that time].” Only later would I learn that Bathan had passed away in 2005. The news was bittersweet. I could only imagine how precious such a photo would be to Bakhait and his family. So unexpected, it captured Bathan in his element, as he once was and always would be, strong, stoic, and determined.

“We would like to send Mark a letter to appreciate him and to thank him for this picture. We need to invite Abu Jack here, because he is a very good man. He kept this picture for us. He took care of our grandfather.”

“Insha’Allah,” Quriyan then told me, “When I meet Bakhait next week in the desert, I will send you a picture of him.”

I was thrilled that he had found this man’s family. “When you meet the family,” I responded to Quriyan, “Please give them my blessings and apologize that I did not give their grandfather a ride in our truck -- he was walking in the opposite direction.”

That day, there had been no other cars or trucks for miles on this desolate stretch of road, so we were surprised to come upon this solitary man walking purposefully in the desert. We decided to stop, partly dictated by a sense of duty and concern and partly to satisfy our curiosity. After sharing some water and pleasantries with him, I asked his permission to snap that singular image of Bathan. Who knew that as we shook hands and parted ways, we would never to see one another again? At the time, it had not occurred to me to offer him a ride, as we were headed in opposite directions. I assumed other vehicles would eventually pass by, traveling in his direction. But the memory of him has lingered in my thoughts these past four decades. Who was he? Where was he going, alone in the vast expanse of desert? Would he reach his destination, Insha’Allah? 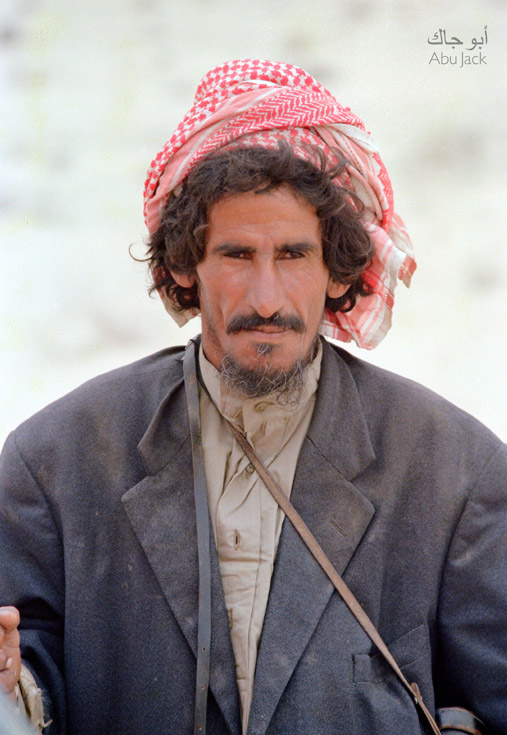 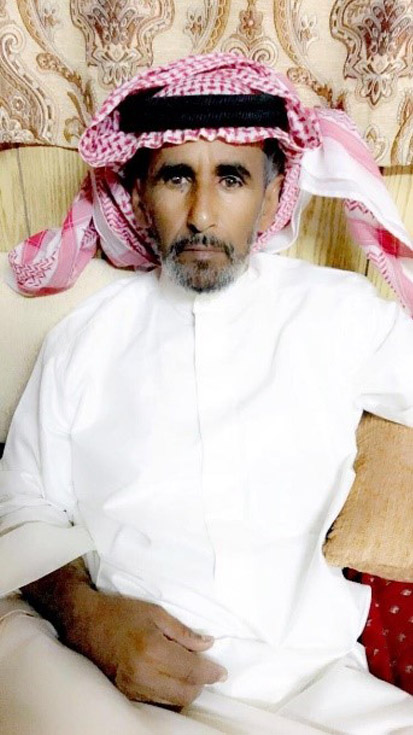 A week later, I received another voice message. “Abu Jack, how are you?” It was Quriyan. “I sent a picture to you. This is the son, Bakhait,” he said. “I met him, and he told me a lot of stories.” I opened the link and gazed at Bakhait’s photo, comparing the features of father and son and noting the distinct similarities.

“Bakhait told me that most of his father’s life he was walking, always carrying a water bag with a leather strap on his shoulder,” Quriyan continued. “And he did not like to ride in vehicles – he first rode in a car in 1980.” I found these facts particularly interesting. In the photo I took of Bathan, the slim leather strap of his water bag crosses his chest, stretched taut and tugging at his neck with the weight of water drawn from a nearby well. For Bakhait, the glimpse of the leather strap must have been a clue that this man was his father. I then wondered if Bathan would have accepted a ride from us had we offered? He preferred walking, and, according to Bakhait, it would be another year before he took his first ride in a car. Perhaps, he would have declined.

“When Bathan married Bakhait’s mother, the honeymoon was to go to Headbih to drill water wells,” said Quriyan. “Headbih is around 190 kilometers from Haradh, south, in the Rub Al Khali. The well’s depth was 40 meters. Not only this, he’s very famous for drilling water wells – maybe fifty water wells in total,” explained Quriyan. The two, husband and wife, proved to be an excellent team. “His wife helped all the time to remove the digging materials out.” I later learned that the photo I had taken of him could very well have been in the vicinity of one of his wells.

The Bedouins cherish their family ties, and so, long before the days of instant communication and convenient transportation, they often went to great lengths, sometimes at great sacrifice, to maintain relationships with their relatives who were spread throughout the region.

“Bathan was a very strong man, you know,” Bakhait told Quriyan. “In November 1950, Bathan went to Rub Al Khali, walking near the border with the Emirates. He had not seen his cousin in years. He wanted to visit him, so he departed, but didn’t tell his family where he was going. His family looked for him for one month, two months--they thought he died.” Without Bathan, it was a bleak time for the family. They had decisions to make.

“They moved with their camels during wintertime to the north,” continued Quriyan. It is customary for Bedouins to move their herds to different grazing areas, often hundreds of kilometers away, depending on the season and where rain has fallen. The distances were great. If he were still alive, his family wondered how Bathan would find them. Days, weeks, months passed.

“In February or March 1951, his father came back, alhamdullilah,” recounted Quriyan. Communication during those days was sporadic, random, and primarily by word of mouth. For the Bedouins of the region, travel was primarily by camel or on foot.

Still alive, Bathan had been determined to find his family. How did he do it? “By asking everyone about his family and where they were,” said Quriyan. “And when he finally found his family, he was accompanied by two young boys, the sons of his cousin.”

Bathan’s family was so happy to see their father. Separated from his family for nearly five months, they asked him, “Why did you leave?” Known as a man of few words, he explained, “I went to say, ‘Salaam Aleikum’ to my cousin.” And, so he did. The long separation had been difficult for everyone, but Bathan had succeeded in seeing his cousin and then reuniting with his family. Bathan truly was a very strong man. Strong in fortitude, strong in determination, and strong in duty to his family and tribe.

In the months that followed, my curiosity about Bathan and his family grew. What had life been like back then? How could Bathan dig wells by hand? Where did he find, and how did he pay for, his food and supplies? Why did Bathan return from the Emirates with two young nephews in tow?

Encouraged by my many questions, Quriyan contacted Bakhait and his sons and began to gather details about Bathan, Bakhait, and the life of this family of pastoral nomads – true Bedouins to this day, migrating with their herds hundreds of kilometers each year, according to the seasonal rhythm of rainfall and pastures.

The life of the mysterious man I had met so many years before was about to be illuminated.

To be continued in the next installment of this series. 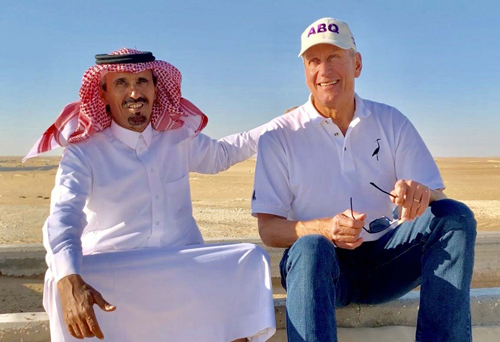 Author's Bio: California-born and raised, Mark Lowey - known to many as Abu Jack - earned a degree in Construction Management and embarked on a career that started in Saudi Arabia and continued around the world. By luck or fate, his final project before retirement took him back to Saudi Arabia.