In Part 1, the party of four enjoyed an exciting, if somewhat stressful, four days in Syria’s capital, Damascus.

We packed up the rental van and set off northward. Using an iPad tablet with the Google Maps app that was somehow functioning off the local cellular network, we tracked our movements on its screen, a remarkable feat since there seemed to be no cellular internet service in Syria. As the self-appointed navigator, I sat in the front passenger seat and watched that little blue dot on the screen creep along the streets and highways of Syria. Highway signage was often helpful, but not always in English. Sometimes I had to study the screen and zoom in on intersections and landmarks in front of us to help plot our route. When all else failed, we stopped and asked directions from helpful Syrians. 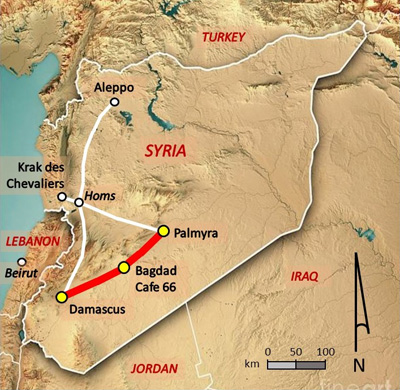 Route from Damascus to Palmyra. 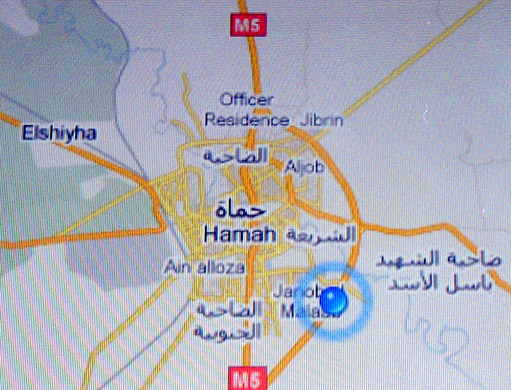 Tracking our position on the ring road around Hamah, north of Homs.

The cafe’s modest compound sits all alone in the desert, a welcome sight for travelers. In addition to a small restaurant and a few guest rooms, the owners also run a museum and gift shop selling fossils, local rocks and an array of trinkets and artifacts. We ordered Arabic coffee and special herbal tea and relaxed for a spell. 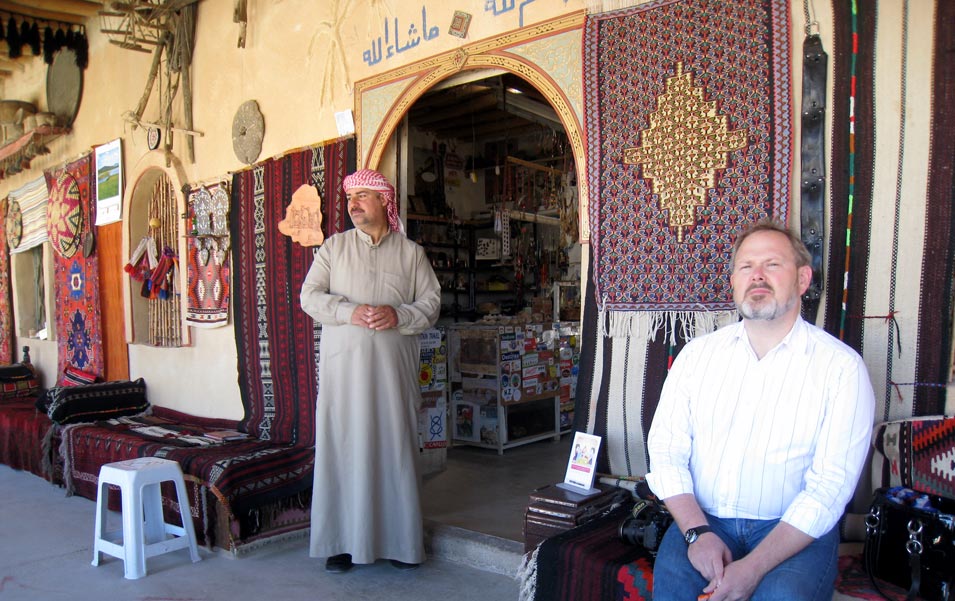 The drive from Bagdad Cafe 66 to Palmyra takes two more hours and passes through several small villages. We arrived in Palmyra, the fabled oasis and caravan stop on the Silk Road, in the early afternoon. Passing magnificent Roman ruins just before reaching the town center, our first glimpse of the ancient city was the stunning Monumental Arch, also known as the Arch of Triumph. We pulled over for a quick photo before heading into town to search for accommodations. 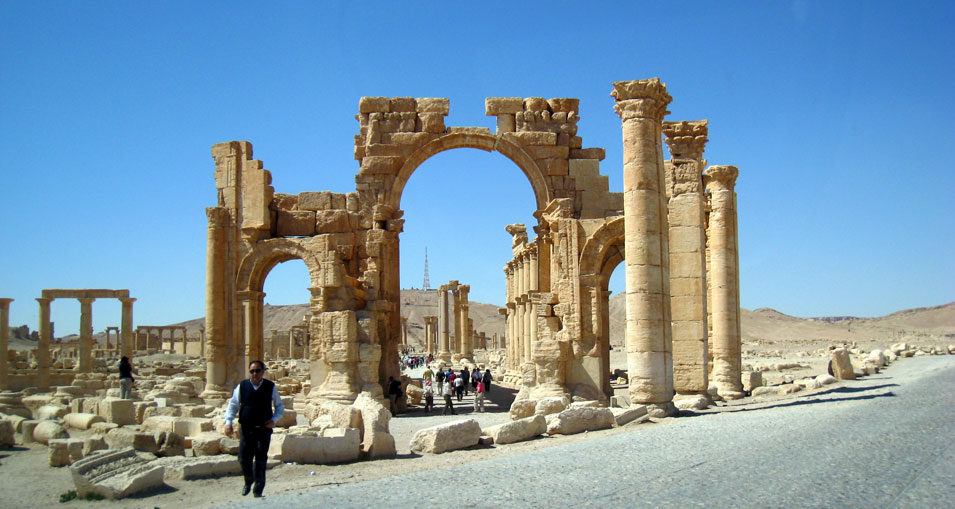 “Palmyra thrived for centuries in the desert east of Damascus as an oasis and stop for caravans on the Silk Road. Part of the Roman Empire, it was a thriving, wealthy metropolis – the gateway from Asia to the Mediterranean Sea. The city-state reached its peak in the late third century when it was ruled by Queen Zenobia and briefly rebelled against Rome. Zenobia failed, and Palmyra was re-conquered by Roman armies in A.D. 273. Its colonnaded avenues and impressive temples were preserved by the desert climate, and in the 20th century the city became one of Syria’s biggest tourist destinations.” [1]

We looked around Palmyra’s town center and peeked into a couple of tired 2- and 3-star tourist hotels before stumbling upon the Tadamora Palace Hotel & Spa, just outside of town, a five-minute drive from the ancient city. Surrounded by empty desert, the impressive-looking Tadamora with its imposing façade and crenellated roof line, had been open for around one year and proved very comfortable.

During my research ten years later, I found the hotel’s website to be active, but the hotel itself appears to be closed. No rooms are available. The site recommends that you, “Contact accommodation for availability,” but offers no contact information. 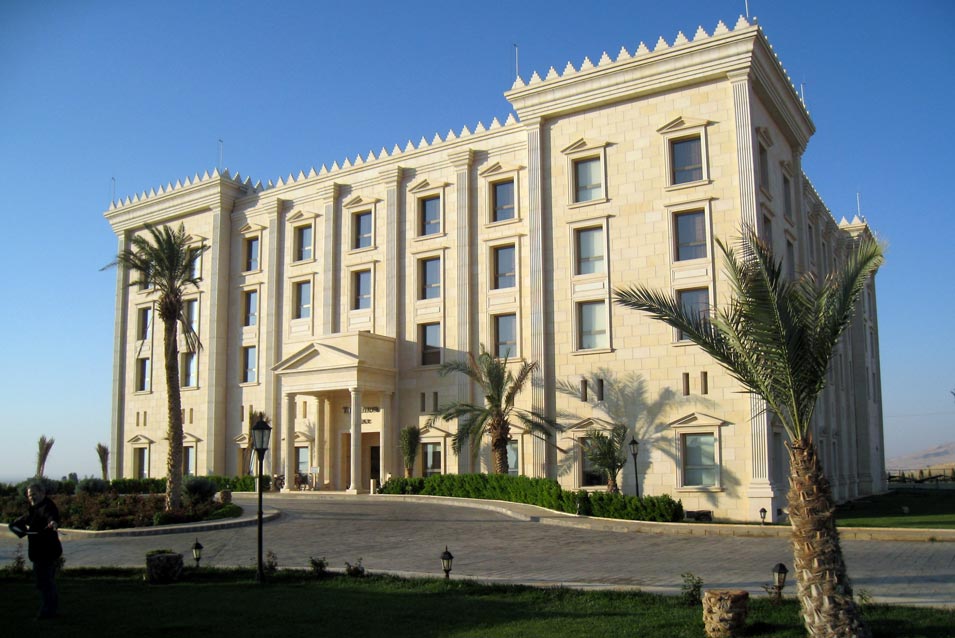 After we checked into the Tadamora, there were still a few hours of daylight left, so we drove to the parking lot next to the Monumental Arch. Young boys immediately surrounded us, selling postcards and trinkets, and older gentlemen offered their services as tour guides. We promptly hired one. We were the only tourists that afternoon. Our tour started at the Temple of Bel. 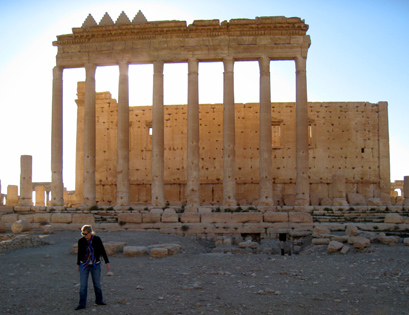 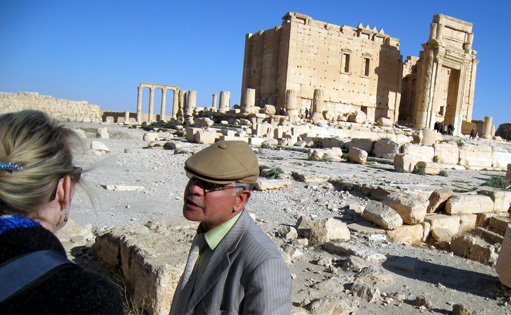 Our tour guide at Temple of Bel.

“The Temple of Bel, sometimes referred to as the "Temple of Baal", was an ancient temple located in Palmyra, Syria. The temple, consecrated to the Mesopotamian god Bel, worshipped at Palmyra in triad with the lunar god Aglibol and the sun god Yarhibol, formed the center of religious life in Palmyra and was dedicated in AD 32. Its ruins were considered among the best preserved at Palmyra. In 1864, French photographer and naval officer Louis Vignes was the first to photograph the temple following his expedition to the Dead Sea under the sponsorship of the 8th Duc du Luynes. In 1980, UNESCO designated the temple as a World Heritage Site.” [2]

The guided tour continued to the main boulevard of Palmyra, lined with beautifully restored Roman columns and temples. I dawdled behind, taking photos, not really listening to the guide. My behavior seemed to irritate him. Thankfully, the others were good listeners and engaged our guide, making eye contact and nodding in response to the flood of information. 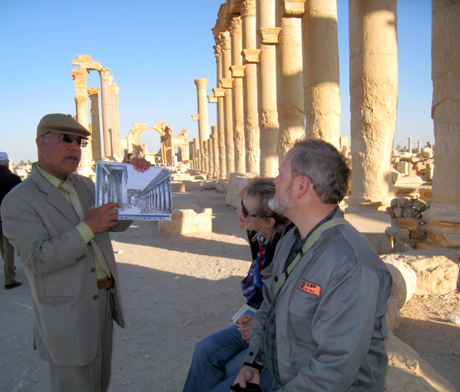 The guide explains how Palmyra looked in its heyday. 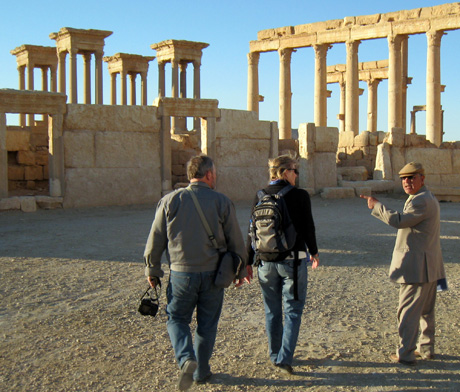 The tour guide motions for me to catch up.

Camel Rides on Offer at The Tetrapylon

We strolled down the main avenue to the Great Tetrapylon that links the different sections of the colonnade. A quartet of four-columned towers dominate a central junction where modern-day Palmyrene entrepreneurs jockey for position and pester tourists, selling postcards and coins and offering rides on their camels. Hailing from Saudi and already somewhat familiar with camels, we politely declined. 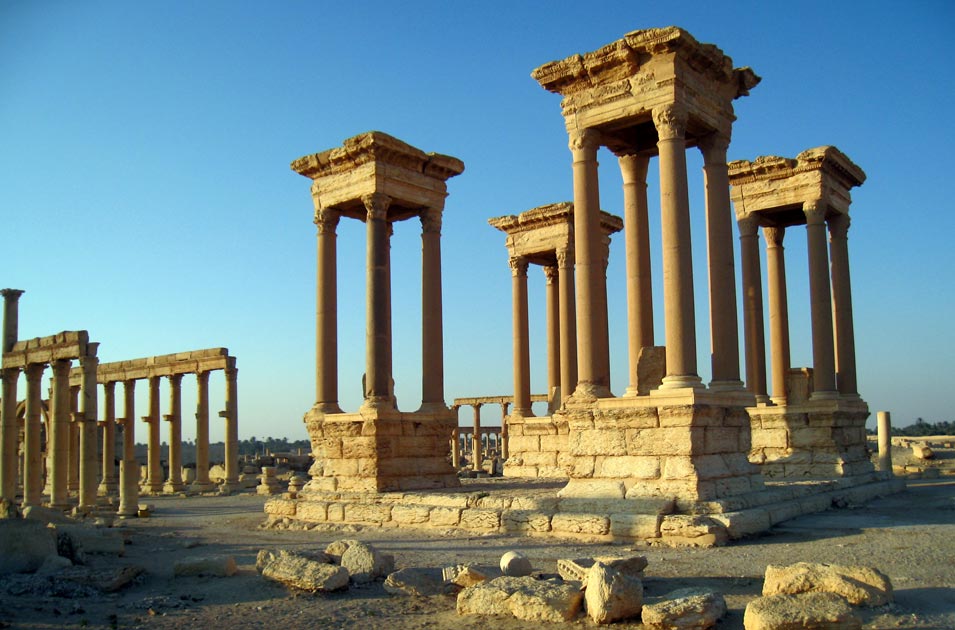 The Great Tetrapylon in the center of Palmyra. 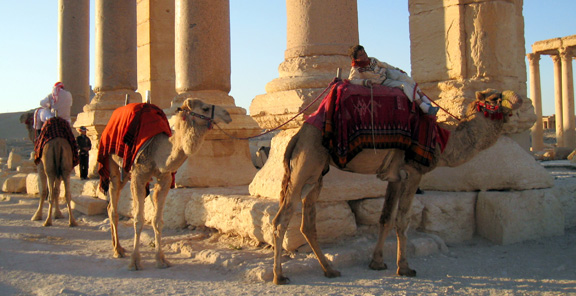 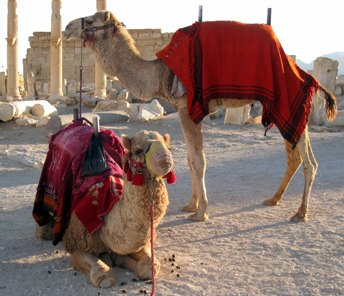 We finished the long, but informative, tour after sunset and returned to the Tadamora Palace for dinner and an early night. The next morning, we returned to the ruins for a sunrise photo session. The place was deserted – no sign of the postcard salesmen and camel ride hawkers. It was so cold that I wore every layer of clothing in my suitcase. 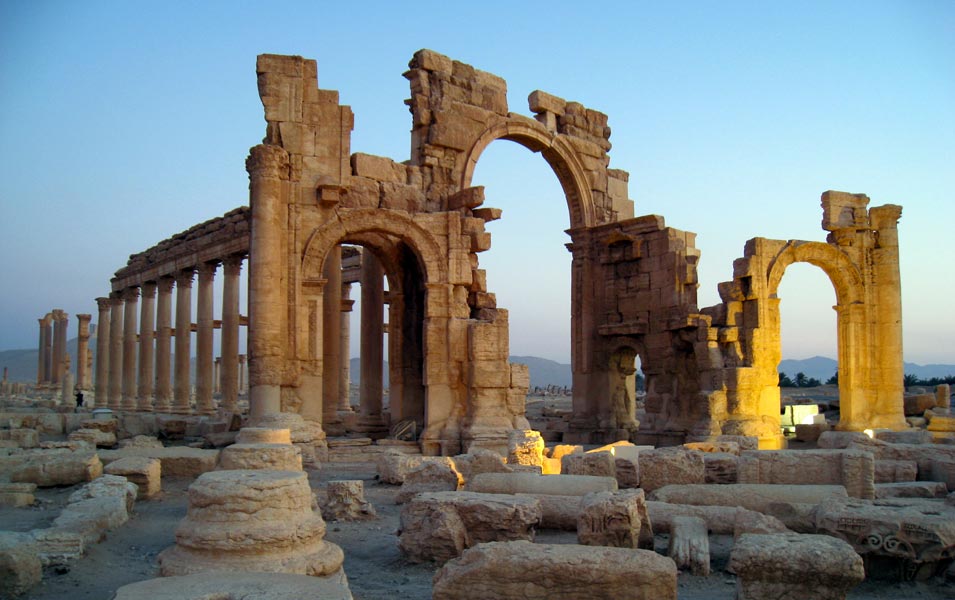 The Monumental Arch at dawn.

Outside the main ruins and up a low hill overlooking Palmyra, lies a cluster of funerary towers, including the Tower of Elahbel. The towers house the family crypts of aristocrats and important Palmyrenes, and each sarcophagus is adorned with a bust of the deceased as its tombstone.

Palmyra’s funerary towers on a hill outside of town. 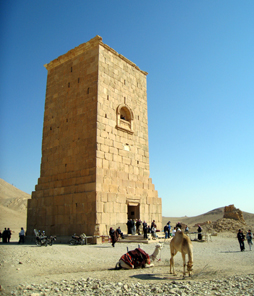 “The Palmyrenes buried their dead in elaborate family mausoleums, most with interior walls forming rows of burial chambers (loculi) in which the dead, lying at full length, were placed. A relief of the person interred formed part of the wall's decoration, acting as a headstone. Sarcophagi appeared in the late second century and were used in some of the tombs. Many burial monuments contained mummies embalmed in a method similar to that used in Ancient Egypt.” [3]

Bas relief representations of the deceased on each tomb.

After two amazing days in Palmyra, we loaded up the van and headed west toward Krak des Chevaliers.

Next: Syria’s Treasures, Part 3 – Krak Des Chevaliers, the Crusader-era fortress dating back to the 10th century.

Tragically, just four years after our visit, the so-called Islamic State of Iraq and the Levant (ISIL) destroyed much of the breathtaking ancient city of Palmyra.

In May 2015, ISIL seized the modern town of Palmyra and the ancient ruins nearby. The militants initially promised to leave the site’s columns and temples untouched. Soon, however, the Temple of Bel was attacked by ISIL fighters using improvised explosives. [1] The Tower of Elahbel was demolished by ISIL using explosives in August 2015. [2] The Monumental Arch was blown up using dynamite.

In late 2015, “A 20-foot (6.1 m) replica of the central part of the Monumental Arch was carved out of Egyptian marble in Italy by machinery using a 3D computer model by the Institute for Digital Archaeology in Oxford, England. The replica was installed in Trafalgar Square, London on 19 April 2016. It was displayed there for three days, before being moved to several other locations, including New York City, Florence, Geneva, Washington, D.C., and Dubai. It is to be sent to Syria afterward. Restoration of the Arch in Palmyra will begin on November 12, 2021.” [4]

Deliberate destruction and theft of cultural heritage was conducted by the ISIL in Iraq, Syria, and to a lesser extent in Libya. The destruction targeted various places of worship under ISIL control and ancient historical artifacts. Valuable items were looted to smuggle and sell to foreigners to finance the running of the Islamic State. [5]

The ancient city was recaptured from ISIL by the Syrian Army on March 2, 2017. Restoration of Palmyra is now underway. 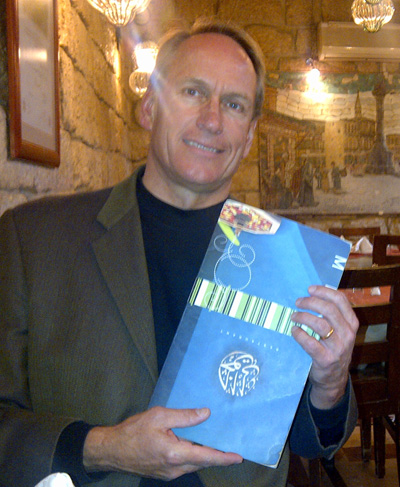