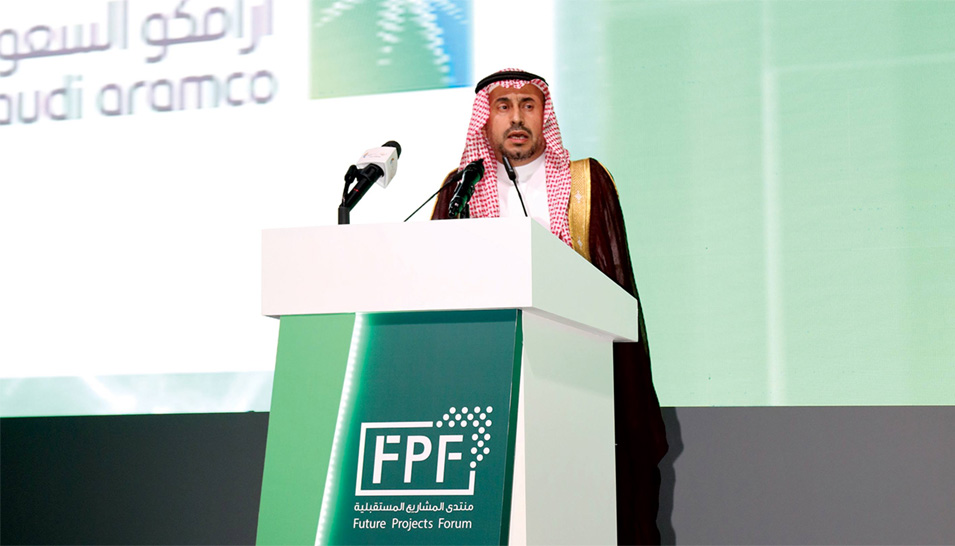 In his keynote address at the Future Projects Forum held recently in Riyadh, Senior vice president of Technical Services Ahmad A. Al Sa’adi notes that the Kingdom is already the Middle East’s largest market for contracting, and more growth is expected: “We are always keen to support and encourage contractors and manufacturers, and to provide opportunities for them to carry out work within the various projects conducted by Saudi Aramco in the oil or gas, petrochemical industries, energy projects, and infrastructure, as well as social participation projects.”

Saudi Aramco was an active participant, and one of several leading companies, as well as government organizations, presenting their contracting projects at the two-day “Future Projects Forum” that was organized by the Saudi Contractors Authority.

Riyadh Governor HRH Prince Faisal Bin Bandar Al-Saud opened the event, which brought together investors, project owners, and contractors to exchange the latest information on the Kingdom’s future development projects, and other opportunities. The Prince praised the forum for helping to promote an integrated approach to achieving the country’s ambitions for the sector. Saudi Arabia, a G20 country, is considered the largest contracting market in the Middle East, with a total annual contracting value of $100 billion.

Describing the first-ever event as a significant platform for exploring future prospects, Al Sa’adi said the Kingdom was already the Middle East’s largest market for contracting, and this would increase with Saudi Arabia’s growth in industrial, service, and residential projects.

Al Sa’adi said Saudi Aramco is currently implementing about 200 major projects through a selection of local and international contractors.

“We are always keen to support and encourage contractors and manufacturers, and to provide opportunities for them to carry out work within the various projects carried out by Saudi Aramco in the oil or gas, petrochemical industries, energy projects, and infrastructure, as well as social participation projects,” said Al Sa’adi. Saudi Aramco Project Management vice president Fahad E. Al-Helal endorsed the event as a “game changer” in the Saudi contractor community — building competency, reliability, and working toward achieving even higher success.

“It is a great indicator toward creating a collaborative environment that fosters partnerships to realize the Kingdom’s vision,” said Al-Helal.

Giving an overview of Saudi Aramco’s project portfolio for the next three years, Iqbal listed the projects in the oil and gas processing facilities, pipelines, power generation, offshore facilities, and civil infrastructure sectors, and presented the pre-qualification bid requirements for local construction contractors.

One of 20 exhibitors at the forum, Saudi Aramco’s booth was visited by more than 350 contractors. Project Management Office Department general supervisor Emad Al-Johar said the team staffing the booth received many questions from contractors seeking advice on how to register with Saudi Aramco so they could bid on the company’s future projects.

“After Nadeem Iqbal presented Saudi Aramco’s three-year plan for upcoming projects, 80 contractors from within and outside the Kingdom were so interested that they immediately came to the stand to register,” said Al-Johar.

The company’s 2019-21 business plan covers approximately 190 projects to be awarded in the coming three years.