Saudi Arabia to Ireland by Land Rover in 1997: The Kings Highway and Petra - Part IV

Because of our short time in Jordan we are forced to cram as much as possible into our visit to the country. We return to the hotel, collect the Discovery Land Rover and drive south, out of the city and onto the ‘Kings Highway’. This is a very old and bad road, with a rough surface, and lots of bumps and bends. It is slow and at times dusty going. Bumping along at 40 to 60 kph along unpaved sections of the narrow road passed waving, smiling children on donkeys and bikes; sliding down steep wadi's on loose stones and crawling up the steep banks on the opposite side. The Land Rover is the ideal vehicle for this type of work and it is well worth the trip to see the fantastic views of sandstone hills, the local people, and the impressive, huge, crusader castles. We pass through Karak and stare up at its old yellow and brown castle perched on a steep yellow hill above the town. We would have loved to stop and inspect the town and castle in detail but time is moving on. The junction with HW 65 is reached and we pass through the towns of Tafila, Dana and Shaubak to finally arrive at Petra.

The entrance fee to Petra of JD 20 each is expensive, so we try bargaining with the guards, arguing that it is late afternoon and that it is winter with darkness only a few hours away. It is to no avail; the guards laugh at our arguments and demand the full entrance fee. We soon find that it is well worth the cost, as we walk along the sandy path between towering rock faces that became closer and closer until they form a rock funnel, through which we pass. Care is required to avoid the racing horses and carts driven by locals seeking fares from the few tourists and offering to convey us, at a price of course, through the passage at high speed to the main area. There are few people around and once again we are pleased that we have chosen the winter season to make this trip, as not only is the temperature pleasant but there is only a small number of tourists competing for the facilities and hotels. 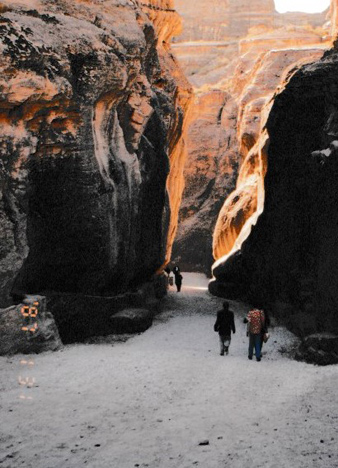 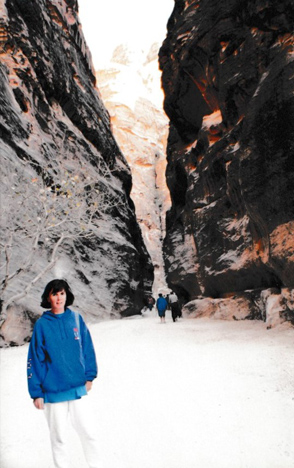 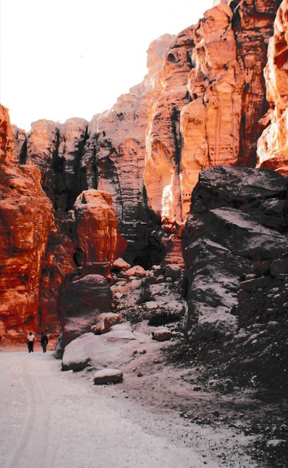 Within the sandy gorge, between the towering rock cliffs, there were a number of Arab stalls whose owners were half-heartedly selling souvenirs to the few tourists around. With our imaginations running wild through the pages of history, we climb the rock slopes, passed temples carved out of the living rock, up to the Monastery (El Deir). It is very impressive and becomes more so as the sun sinks towards the horizon, the shadows lengthening and darkening. We continue up the slope, turn and look down on the scene below and imagine the past when the area would have been packed with people and activity. We begin our descent down the rock face in the growing dark and meet a souvenir seller making his bed for the night on the side of the steep path. We communicate with him in our limited Arabic and he is surprised and claims to be impressed with our knowledge of the language. We inspect his few bits and pieces, and wish him 'ma'a salama’ (good-bye). The light is just about gone as we stumble down the mountain to the gorge floor and pass the armed, black-uniformed, Jordanian police guards who are posted there to protect tourists. 'Ma'a salamas’ are exchanged and we walk back along the sandy gorge with the black rock pressing in on each side, to the open, illuminated area, at the entrance gates.

We collect the trusty Land Rover and drive through the near-deserted streets of the town of Petra and stop at an Italian restaurant. In the tourist season, the town would be packed with people and really jumping, but now it is quiet and the selection of food and service is limited. We consume cold, basic, pizza and drive north across the desert on the road to Shaubak where we turn east to Highway 5, ‘The Desert Highway’. This is a four-lane highway, with no dividing lines, many holes and bumps, and many large trucks. Once again, we are thankful for the excellent standard headlights on the Land Rover and the long-range spot and fog lights we had fitted. The desert is solid black and the other traffic, mostly large transport trucks, have lights that vary from six pointing everywhere to none back or front. The trucks' front lights also come in various colors; reds, greens, blues and boring white. On reaching Amman, we become completely lost, as usual, in the busy traffic, and it takes us over an hour to find Jebel Amman and our hotel.

The Dead Sea and Jeruish

The following morning, we walk around and have breakfast at our local coffee shop at the 3rd circle. Again, it is excellent basic food with a good atmosphere and great value. We return to the hotel, collected the Discovery, and follow the road to the West Bank and the Dead Sea. We park on the shore of the sea and look across to the West Bank. The Dead Sea is dirty, salty and, well, dead, so to protect our health and bankbook we decided not to go for a swim. The local hotels rent out towels and showers but they are a rip-off. The Dead Sea Spa Hotel wanted JD 7 each to use their Dead Sea beach, changing rooms, pool, etc., but we said ‘no thanks’. The government ‘Guest House’ wanted JD 2 each but had no towels and were dirty. So again, ‘no thanks,’ and no dip in the Dead Sea. We head north and visit ‘Jeruish,’ an old Roman city that is now in ruins. The entrance fee of JD 5 each was worth it and we found the place to be very impressive and interesting. It is so very large with streets and streets of ruins and near-ruins. The local kids will even find and sell you ‘Roman coins’, which look very like a Jordanian cent. In the late afternoon, we take the excellent highway south back to Amman and fill up with 23 liters of diesel at a cost of JD 2.5 and found our fuel consumption was 10.65 kpl or 30.04 mpg. We missed the turn-off for the revised, carefully researched, foolproof, return to the hotel route on the first attempt and end up out at the airport. Then we get it all together and return directly to the hotel. We have a pleasant dinner and two Amstel beers in a decent restaurant across the street from the hotel for JD 27.