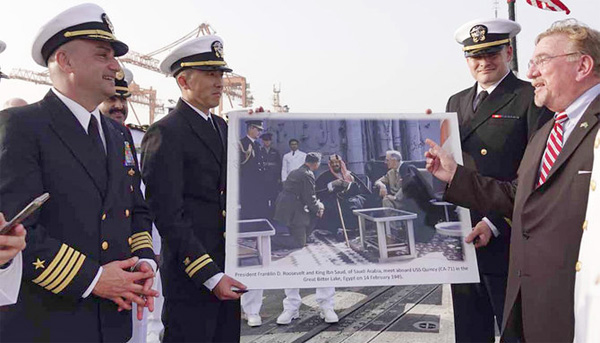 Hall Delano Roosevelt, the former president’s grandson, attended the celebration of the 75th anniversary of the meeting between President Franklin D. Roosevelt and King Abdul Aziz on board the USS Quincy in 1945. (AN photo by Huda Bashatah)

JEDDAH: The US Ambassador to Saudi Arabia John Abizaid made an address in Jeddah on Sunday at a celebration of the 75th anniversary of the meeting between President Franklin D. Roosevelt and King Abdul Aziz on board the USS Quincy in 1945. 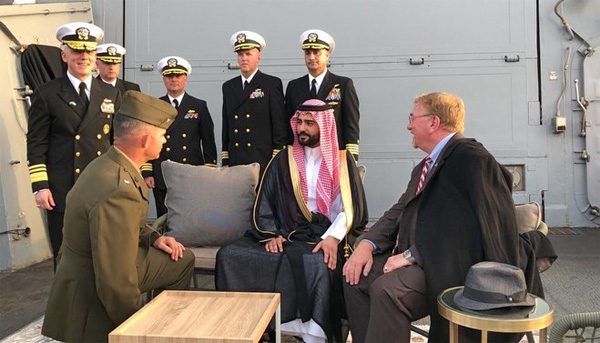 In an exclusive interview with Arab News on board the USS Farragut, Abizaid told Arab News: “When I think how much has happened since that 75 years of the meeting, we should be very proud of how things have gone.”

“You move from a more oil-based economy to a service-based economy. And as you move there, it makes more sense that American companies would partner more and more with Saudi.”

Roosevelt said the meeting was about America’s “enduring relationship” with Saudi Arabia and recognizing there was a “great man, King Abdul Aziz, creating a great nation.” 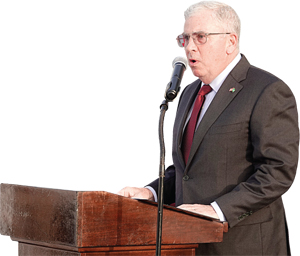 Commander of the US Naval Forces Central Command Admiral James Malloy told Arab News that the tight-knit relationship with the Kingdom will ensure regional security.

“Because it’s a tight cooperation, it responds to threats in the region. Threats in the maritime, threats to the free flow of commerce, whether it is state-sponsored or non-state-sponsored, we both recognize that this threatens the region as a whole. When that happens, you call your close friends and our closest friends are the Saudi Royal Naval Forces,” said Malloy. In order to ensure the continued monitoring and security of the waters off the Arabian Gulf, the Red Sea and Arabian Sea, Malloy sees the cooperation between the two nations’ naval forces strengthening through improved communications.

“The biggest improvement will be in information flow, as each of us are fielding new and more capable ships,” said Malloy, adding: “One of the things we’re building into our ships is the ability to talk with each other, so unlike the past ships where we would have to call back to our home base, now we can talk with each other. This makes us more capable than just sum of the two of us, but capable as a whole fleet.

“When you make a friend with someone of this region, you can count on them, you can trust them, they always have your back and they’re always looking after the interest that you have that you share with them. It’s something we look forward to operating with our partners in this region because of that,” he said.

Malloy said that “Maritime has always been our tradition and one of the first places that we visited when we came over here was the Kingdom of Saudi Arabia. I think we share a common vision for the legitimate use of oceans, and that brings us together as navies, something that we’re natural at.”